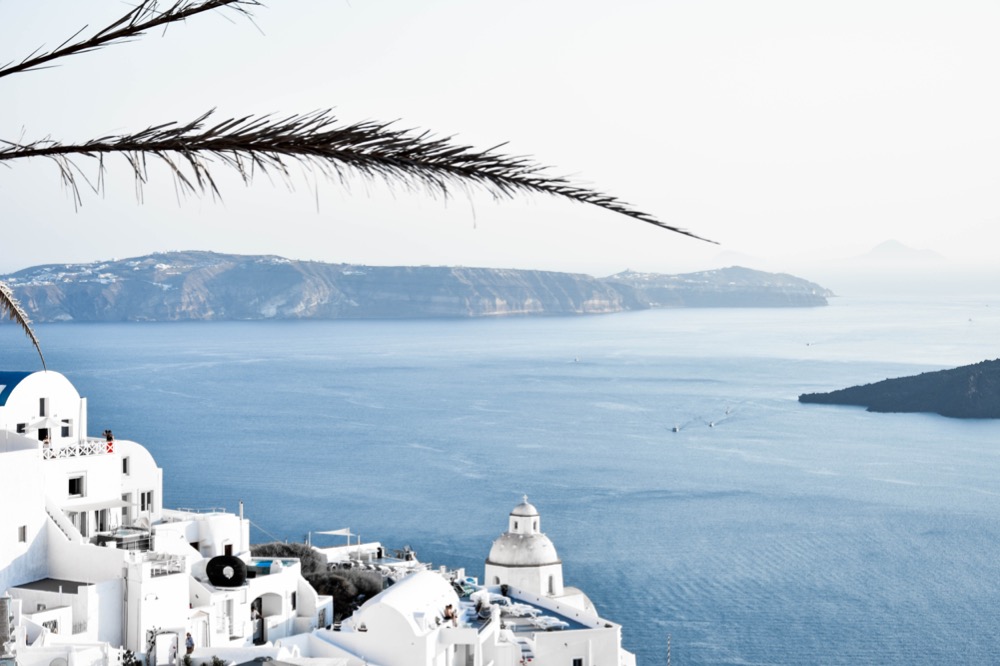 The Mediterranean - the superyacht industry's biggest cruising ground - has been placed under the microscope by the European Committee for Professional Yachting to better understand the latest yacht navigation data for the period between 2015-2021. In this study, with analysis provided by FLYN, the organisation analysed every major yachting country in the Med, taking stock of the trends in attendance, objective attractiveness and general popularity of the various superyacht hubs in the region.

There were over 65 million yacht positions to take into account - all for yachts over 24 metres equipped with AIS. The criteria for a data point was that the time spent in one position has to be for more than one hour, this of course can create a bias as some yachts tend to turn off their AIS during a long stay. These graphs also don’t distinguish between the growth of the market itself and the growth in the use of AIS equipment on board, however, the ECPY and FLYN say that they do correct for this bias. 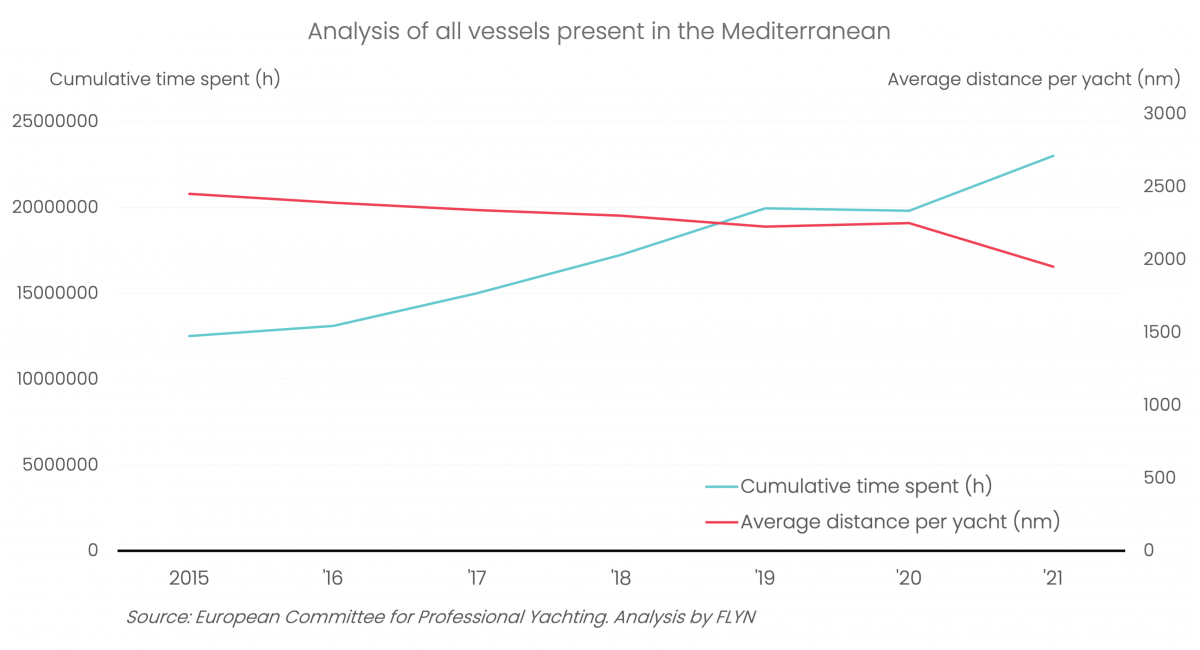 To offer a very basic conclusion to the study, it's safe to say that the Med is doing very well, despite the COVID-19 regulations the Med Yachting indicator is growing at 13.5 per cent every year. It appears the Eastern Med is doing extremely well, specifically in countries such as Turkey, Greece, and Croatia, however, it's suggested that France and Monaco will need to summon up some resilience to counter the increasing social, fiscal and environmental regulations. But at the crux of this analysis, beneath all of the complicated graphs and fancy terminology, lies one important question - Is yachting heading east?

The most intriguing years in this analysis are the pandemic years as they offer slightly more indication of the true resilience and health of the market under pressure. Yachts over 24m spent a total of 23 million hours in the Mediterranean in 2021 alone, but it was the start of the pandemic that really affected the yacht market. The year 2020 is clearly marked by a very significant decrease in the presence of yachts in the Mediterranean, the most obvious reason being the set of sanitary measures taken against COVID. This decrease is not reflected in the attendance figures for 2021, which is practically in continuity with the 2015-2019 trend, as is the number of yachts present.

The analysis of the average length of stopovers per country for 2021 is where the data starts to get juicy. This information can be characterised by two extremes - Monaco, where the stopovers are long (75 hours) but few in number (<10,000), and Turkey, where the average stopover is just 14 hours but they receive almost 10x more calls than Monaco. 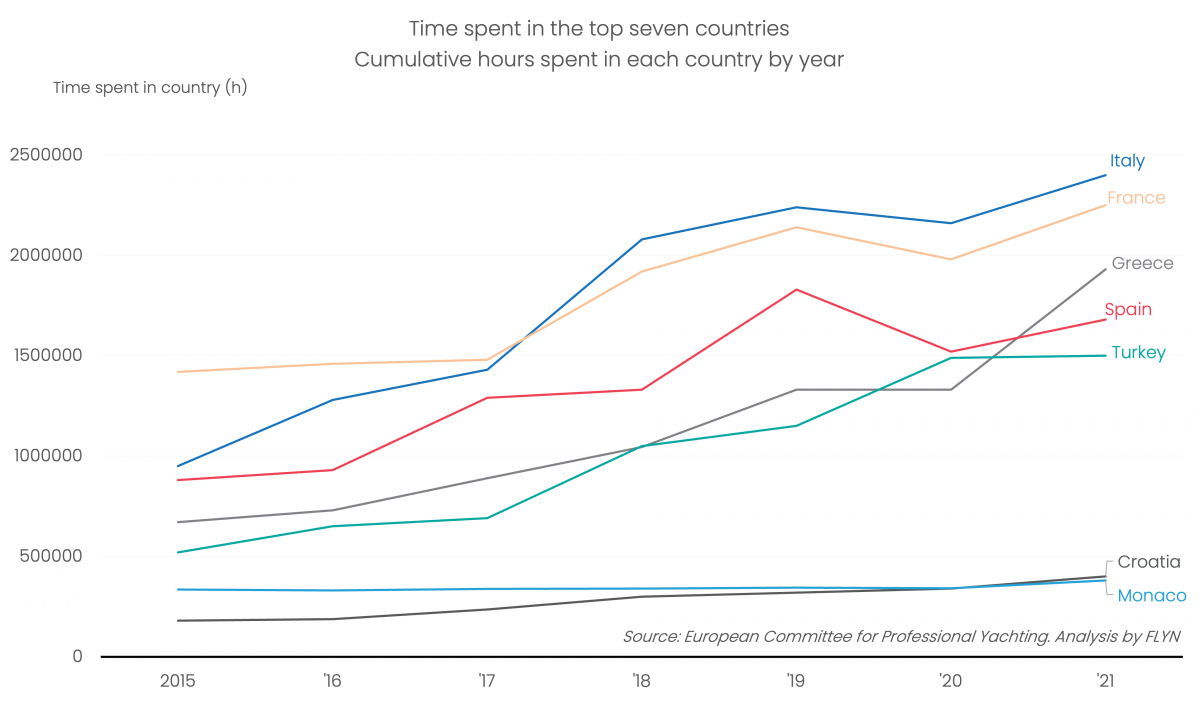 You then look at the amount of time that's being spent in ports, yards, and anchorages in cumulative terms over the 6-year period. Italy overtook France at some point between 2017 and 2018 (supposedly due to the increase of regulations in France), then Greece overtook both Spain and Turkey in 2021, and probably most surprisingly, Croatia overtook Monaco after a long trend of differentiated growth. Montenegro also maintained its usual ranking after a dip in form during the height of the pandemic.

Unsurprisingly, Italy - the beating heart of the superyacht industry, is the most promising country when it comes to destinations, homeports, and shipyards (both new build and refit). Yachting has become such a major industry in Italy that even a pandemic, a sanction fallout, and the increasing ESG standards can not prevent it from growing year on year. And yes, Monaco and France combined are still the leading destinations when you look at it from the perspective of volume. But it's Croatia, Greece and Turkey who are the new kids on the block getting all the attention. 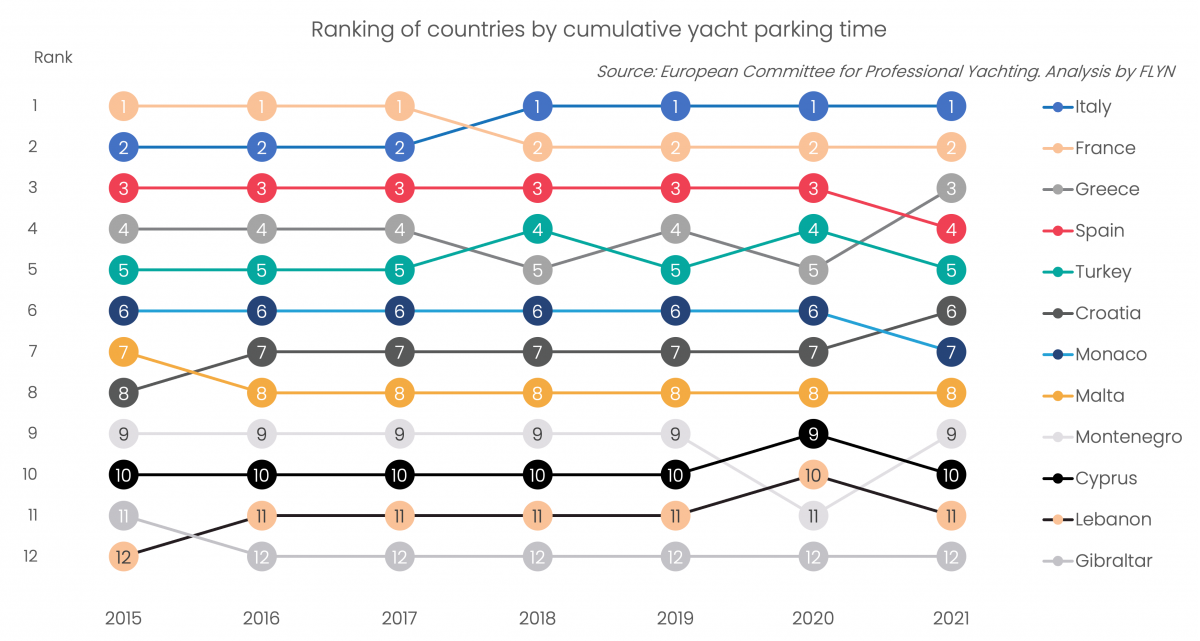 The Western Mediterranean is still the business end of the yachting industry, where most people go for homeporting/wintering, refit work, and recruitment. But it's the dynamic Eastern Med where all the action is happening and where people are going to really enjoy their yachts without all the flash and palaver.

Generally speaking, it's a promising outlook for every major yachting country in the Mediterranean. Something as epic as an America's Cup race will probably boost the migratory statistics of Spain for that year and it may well be enough to pip Greece for a podium finish. There is an abundance of iconic events and attractions in the Western Med, which means it's always going to be about supplying the demand rather than needing to lure even more superyacht owners. So the concern lies in the relatively near future and will depend on whether countries in the Western Med can come up with new solutions for the infrastructure problem and figure out countermeasures for the regulation pile-up.