Donald McLaren leaves the shores of Turkey for his first trip on board a superyacht, coming to terms with a new set of standards and experiences… 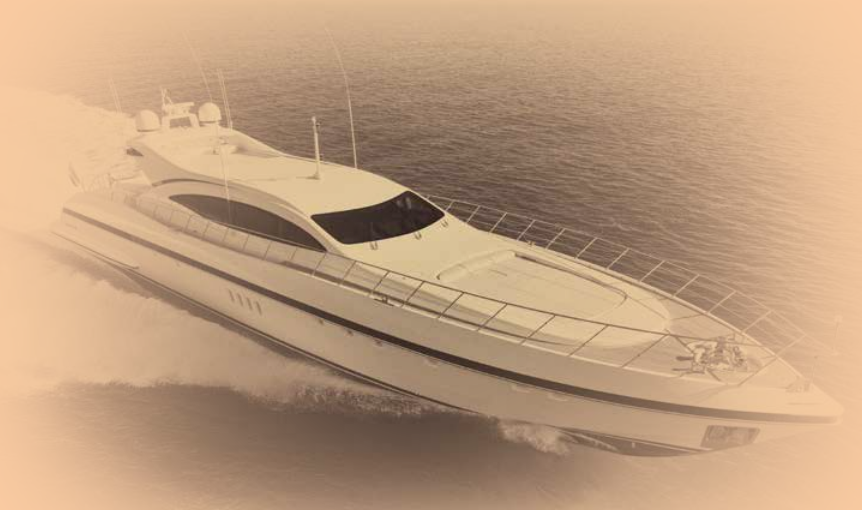 As Captain Luca throttled back on the chrome D-shaped control on the bridge, the throaty noise of Aphrodite drowned out the surrounding peace in the same way as the unmistakeable gurgle of a Harley Davidson V-twin would disrupt a peaceful Chelsea morning on the King’s Road. This noise didn’t just shatter the peace – it took a sledgehammer to it! And when all the bits were on the floor, they were trampled on with hobnailed boots as worn by mid-century coal miners.

The Mangusta 108 was brash, it was loud and at this moment in time Donald was thoroughly enjoying it. He swore that the noise of the engines would have woken Poseidon, and as the broad ‘V’ of the bow rose imposingly from the water, he hung on for dear life as he sat to the stern of the yacht. Looking behind him, the crescent-shaped arc that Luca formed in the deep blue waters off Bodrum bore more than a passing resemblance to the white crescent moon that adorned the Turkish flag fluttering on the coast they had just left.

All this was lost on Yannis, the Greek Cypriot, and his wife who, used to the power of Aphrodite, were already well into their champagne. Perhaps it was the power of the Bollinger, but they didn’t need to hang on – their muscle memory and their learned sense of balance rode every wave and every turn that Captain Luca could throw at them. Donald was looking sternwards when he felt a hand on his shoulder. He looked back and his friend Nigel was mouthing something to him. Donald couldn’t hear a thing but nodded, and hoping he had nodded correctly turned back to enjoy the exhilaration and acceleration. This was sporty. This was a thoroughbred Italian sports boat. It was a Ferrari. It was a Maserati. It was a Lamborghini. It was the very epitome of Italian design sexiness, and right now he wanted one.

Yannis shouted something at him. Donald could see his lips move but he couldn’t hear a thing. He didn’t want to talk if truth be told. Not being able to hear was becoming a habit, yet he was enjoying the experience more than he ought. Then silence. After an hour or so at 20 or 30 knots, the silence was alien. So normalised had he become to the thrust, the lack of noise was unnerving at first, but he soon adapted to the change of volume. The bow of Aphrodite fell back into the water, bowing to the dark green vegetation that smothered the rising hillside. She was barely ticking over but in so doing she glided. Then nothing.

‘Clank, clank, clank’. Donald spun around. He would soon recognise the noise as being the anchor chain being released. Although Aphrodite moved, she was suddenly rock solid as the anchor bit into the sea floor. Donald leant back and looked forward along the deck towards the bow, his sight guided by the short, slim stainless-steel grab rail that wrapped itself around the sides and front of the yacht. A petite stewardess in a khaki skort and untucked white polo shirt embroidered with the yacht’s name and insignia in navy blue on the right sleeve held a silver tray in one hand. With her other hand behind her back, she bowed slightly, and offered Donald a tightly rolled, ice-cold towelette to freshen up. Donald was struck mute by how the sun lit up her auburn hair. He grabbed the towelette nervously and unfurled it; the freezing contact on the back of his neck was a welcome relief from the Turkish sauna. He tried to fold it up and put it back on the silver tray.

“That’s not necessary, sir,” said the stewardess in an unmistakable Australian accent. Her beaming smile was beautiful. “She is staff. She is staff,” Donald kept repeating to himself. He tried to remember to take deep breaths and behave himself. Yannis saw what was going on and burst out laughing. Laddish really wasn’t Donald’s style.

“May I show you to your cabin, sir?” Donald followed the petite stewardess into the main salon and he was taken down to a single-berth cabin with large windows running its length. He momentarily closed his eyes and recomposed himself. He focused on the slightly clichéd sea-shell objets d’art and blue and white paintings of Santorini that were straight out of the ‘how to make a yacht look like she’s owned by a Greek’ interior design book. It was charming. Obvious, but charming.

His bags were already unpacked, not that they needed unpacking. The crew had been through his stuff and clearly word had been passed to Yannis or his wife that Donald was not yachtready. Laid out on his bed was a pair of brand new Vilebrequin sky-blue swim shorts with a recurring turtle motif. There were several Ralph Lauren and Lacoste polo shirts in white, navy and red. A light, crew-neck, cableknit cashmere sweater in the palest of yellows was also left on the bed, together with an Aphrodite-embroidered baseball cap. He should have been annoyed but he was their guest and he presumed they were gently pushing him in the right direction, whatever that meant. He was about to say something but the auburn-haired young lady spoke first.

“Hope you don’t mind, but madam loves to make sure everyone feels comfortable and not out of place. She rang ahead from the airport this morning. If any of the clothing doesn’t fit we have other sizes just in case.” As soon as the words had left her lips she was gone. He was alone.

“Wow!” thought Donald. “Is this normal? It ought not to be. Shall I continue to accept this abnormal situation until it becomes normal?” He was now wearing swim shorts that probably cost more than his first work suit.