G L Gilbert returns to London and the beginning of his story, some 87 years before ‘Apocalypse Now’ in issue 175, to explore how it was that his protagonist initially became interested in yachting… 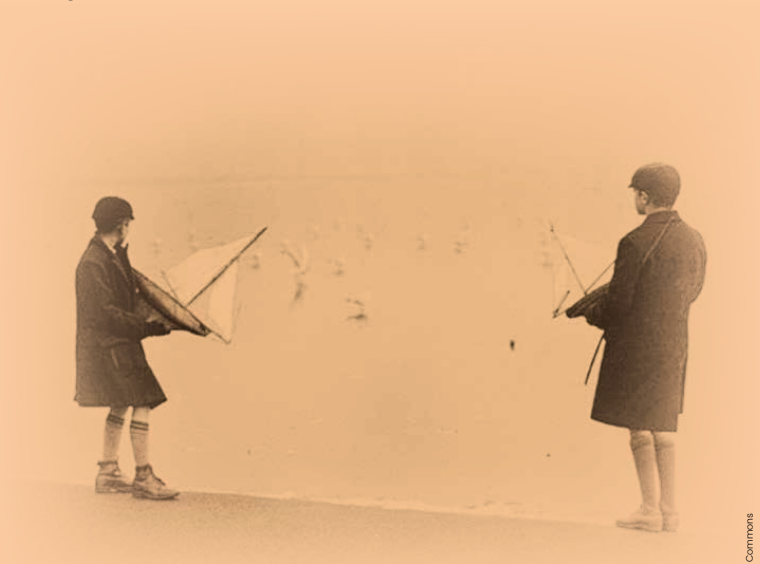 Donald McLaren squinted from the sunlight. Aged just four, he stood safely next to his father by the boarding jetty at the boating lake in Greenwich Park. Behind him, on this bright 1966 August summer’s day, the English were still basking in the warmth of having beaten West Germany 4-2 in the World Cup Final. In what was an uncommonly dull and damp summer, a group of teenagers soaked up some rare sunshine, lolling on the grass with a Philips wireless neatly jammed into a black leather cover, playing Eleanor Rigby by The Beatles.

Under one arm, Donald clasped his toy motoryacht close to his tiny blue-and-white striped t-shirted frame, the other arm gently secured to his father’s muscular right hand. George McLaren, a short barrel of a man, was a barber and Donald’s father. He favoured the handclippers, which he could scissor at the same speed as any electric shearer. The constant exercise had given him hands that could crush an empty can of Double Diamond pale ale (cans in 1966 were small feats of engineering that required either machinery or Herculean strength to crush).

Donald was distracted frequently – he was four. Four-year-olds don’t get lost in their thoughts, they get distracted. He was looking at his yacht and the boating lake. On the lake, the small wooden rowing boats in blue, red and white were less than graceful as their occupants, old and young, mods and rockers, rowed like new-born foals attempting to walk for the first time. They were chaotic and uncoordinated. They got it in the end, but not without much thrashing and rocking of the rowing boats.

Donald longed to get out on the water. This boating lake was, to him, as huge and as unforgiving as the Atlantic ocean, and the yacht he proudly held was his first command. His eagerness to launch it was palpable. He remembered with huge pride when his father had brought home his first maritime adventure. To Donald it was not a toy. The pictures on the box were wonderful water-coloured illustrations, so common at the time, of a wooden-hulled family cruiser, its bow lifting from the waves cutting through the water with grand plumes thrown up by the propellers to the rear. In the distance, there were sandy islands with palm trees, and Donald dreamt of being inside the white cabin in command of this ship.

He didn’t like the flag. The flag would have to go. He liked Long John Silver and Robinson Crusoe on TV. He couldn’t remember if Robinson Crusoe had a flag. A Jolly Roger was a ship’s flag. That’s the one that he wanted. He had still to persuade his father to haul up the pirate emblem. He vividly recalled when he had eased open the box and smelt that sweet acrid pong that hung over plastic toys of the 1960s. He examined the yacht from every possible angle and carefully placed it on the green swirly patterned carpeted sitting room of their Victorian two-up, two-down in Deptford. Donald lay on the floor, his chin resting on his hands, and with one eye closed, he looked at the yacht as if it was big enough for him to step on board. The bow, the stern, the port and the superstructure were all thoroughly examined. It was perfect from every angle.

There was, to the stern, a tiny little sausage of a button that when pressed would send the propeller whirring, or so Donald believed. He pressed the button and nothing happened. Donald’s father, like Gulliver, reached down from a great height, seized the yacht and held it aloft, and in the other hand he had the blue Ever Ready U11 battery which he deftly inserted underneath the deck. He closed the hatch. The battery would provide both power and ballast.

Then the sea trial, and what a sea trial. The galvanised steel bath was filled with water. The yacht was gently released from Donald’s hands into the icy cold water. She floated. To the stern, by the flagpole, was that small sausage of a button. He pressed it. The single screw propeller hummed; the light pitch was not the deep throaty noise he expected but he was satisfied nonetheless. More than satisfied, he was grinning from ear to ear. Then CLANG!

The yacht’s plastic hull, for it was plastic not wood, hit the side of the bath. He rushed to the other side of the bath and lifted it out of the water, relaunched it and CLANG! Again, it hit the side of the bath and the eager child, tugging at his father’s khaki cavalry-twill trousers, was dragged in the direction of the front door to protestations of “Please can we go to the boating lake Dad, please, please?” With a brown herringbone tweed jacket over his crisp, drip-dry buttoned-tothe-neck white shirt and regimental tie, father and son were off to Greenwich.

It was almost their turn. There was a tall boy in the boating lake. He must have been very tall as he was wearing waders which, to Donald’s mind, meant he was at least seven feet tall because the boating lake had to be very, very deep indeed. Donald could never fathom that there was barely 24 inches of water beneath each boat.

As the red rowing boat with wooden plank seat, which was to be their lake craft, was manoeuvred near to the jetty, his father gingerly stepped in (he was never the most stable man on the water), and turning around he lifted Donald, holding on to his yacht for dear life, into the boat. His father took a little time to co-ordinate his rowing stroke but, once settled, he was quite handy.

In a different life, a life of privilege, perhaps he could have made a go of it in the eight for Oxford or Cambridge, or maybe in the 1952 Olympics in Finland? Could he have bettered Tony Fox’s fourth in the single scull? When the rowing boat got to the middle of the lake, George stopped rowing. “Come on Donald, let’s see what she's got.” Donald shuffled his bottom to the side of the rowing boat, tipping it ever so slightly, and leant over gently. With the sunlight dancing on the surface of the lake, he placed the yacht on the water and, firing her up, the engine whirred once again and she was away.