In the latest excerpt from our G L Gilbert serial, Donald receives an interesting offer while at the Monaco Yacht Show… 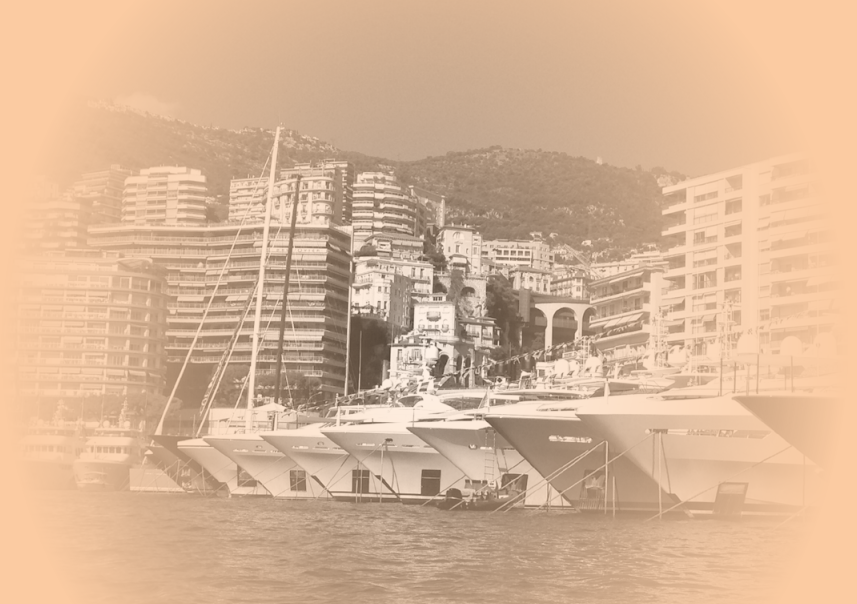 It was 5.55pm and Monaco was warm in the late September sunshine that would continue for several weeks to come. Port Hercule was still host to the fleet of cheek-by-jowl superyachts that had been on display during the past four days at the Monaco Yacht Show. It had been Donald’s first show as an owner and he now stood by the stone balustrade of the terrace of the Hotel Hermitage.

In truth, he felt a little self-conscious. Perhaps he had been caught up in the excitement of the event. Donald was gullible when it came to merchandise. He well recalled a summer at Disney World in Florida where, after a week with Mickey and his pals, he’d managed to accumulate more merchandise than was healthy for a grown man. Now, here he was sporting the Monaco equivalent: blue blazer with the crest of the Yacht Club de Monaco, white trousers and the club’s burgee adorning his dark-blue tie. He had truly sipped from the fountain and was already in danger of becoming a yachting cliché.

Below him, in those parts of the marina not occupied by yachts, was a small swarm of tenders and New England lake boats. Speedboats that paid homage to Riva Aquarama sped between pontoons while others shot out of the port heading for one of the dozens of yachts at anchor in the waters just off the Principality. As much as Donald admired these vessels, there was nothing like the 1962 original. Long and low, Carlo Riva’s aquatic poem in mahogany reflected a more genteel and less brash time. It was the age of Lake Como, of the Riviera in those postausterity days following the Second World War and of the glamour of Monte Carlo after Grace Kelly had married Prince Rainier.

Donald was sipping on a gin and tonic with a slice of cucumber when his phone rang. It was Nigel, his broker from Camper & Nicholsons, who really should have known better. It had just struck 6pm, and as was the tradition at the Monaco Yacht Show, every yacht sounded its fog horns and klaxons to announce to the industry that another show had come to an end. The noise seemed to go on forever.

As the bellowing subsided and the odd stray ‘toot’ punched the air, Nigel’s long-abandoned call resumed. “Nigel, that was a stupid time to call me.” Rather sheepishly, the impeccably spoken Nigel apologised. “I completely forgot about the time, but I wanted to check if you had the letter of intent to hand and whether you had signed it.”

Donald slipped his right hand into his inside pocket, teased out the folded A4 sheet of paper and flipped it open. On Camper & Nicholsons’ headed paper, typed in capitals was LETTER OF INTENT. It had taken almost four years to realise his ownership dream and he had spent just one summer on this, his first yacht. Donald’s memory flashed back once again to the boating lake in Greenwich Park and the toy batterypowered Derwent Cabin Cruiser he’d had as a boy. In the yacht that he had just designed and built he had recaptured the spirit of those childhood memories and the wonderful mid-1960s summer weekends with his father.

Donald had never known a Monaco Yacht Show like this one. Shipyard after shipyard was announcing bigger newbuilds. New yards were springing up like daffodils in springtime. Yacht builds in production were changing hands for ridiculous amounts, sometimes with a premium of two-thirds of the original contract price, as new owners scrambled to get a yacht now and not wait for the next available build slot. Donald had heard of multiple orders being placed by single buyers with the intention to flip the slots and make a killing. The builders were yet to get wise to this, but their time would come.

Anyone who was anyone thought they could jump into this superyacht world and make a killing, and on the piece of paper Donald was now holding was a number. This number was huge, ridiculous and preposterous. All he had to do was sign this letter of intent and, in a few short weeks, he would have almost doubled his investment in his yacht. Donald didn’t know what was more surprising – the amount of money he’d received for selling his business or this crazy deal that Nigel had brought him. He kept thinking back to his father and remembering why he had built the yacht in the first place. He knew in his heart of hearts that if he sold it now, he probably wouldn’t build another. Prices would go through the roof and the reality was that there were people and practices he hadn’t particularly warmed to during the build.

But now he had his yacht. It had been his dream and he was fortunate enough that he didn’t have to sell his dream. “Nigel, tell me about cruising the Caribbean.”

Donald then scrunched up the letter of intent into a ball and tossed it over the balcony.