We revisit the travails of Donald McLaren for a little lighter weekend reading, ahead of the publication of new material next week… 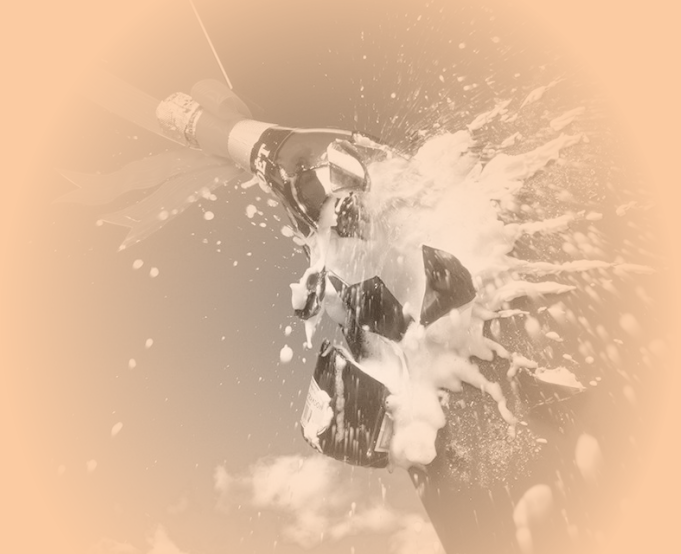 Ever since he’d first realised that he could fulfil his dream of yacht ownership, Donald had a vision of the launch. In his mind’s eye he replayed black-and-white films of great ships being launched on the Clyde. There would be a platform at the bow of the yacht and it would be bedecked in naval bunting spelling out Nelson’s battle cry at Trafalgar, ‘England expects that every man will do his duty’.

Upon that platform would stand someone like Audrey Hepburn, smartly dressed in a dark tweed Givenchy suit, grey pillbox hat and court shoes. She would grasp the heavy magnum of champagne and, with the incantation, “I name this yacht ….” would swing the bottle whereupon the Band of the Royal Marines would strike up ‘Rule Britannia’. The chocks would be knocked away and the yacht would slide down the slipway.

But this was 2003 not 1953. Audrey Hepburn was long gone, Donald had no connections with the Royal Marines and British pomp and circumstance now seemed a little out of place. Perhaps, then, Kate Moss instead of Audrey Hepburn and Don’t Look Back in Anger by Oasis in place of the Royal Marines. Donald might have felt a little guilty that the yacht hadn’t been built in Britain, but truth be told he hadn’t really thought about it much. Perhaps Pendennis could have been an option, Royal Devonport wasn’t, but today he was in Viareggio with Sofia for the launching ceremony.

Nigel and Luca were already at the yard. Preparations had been underway for several weeks and it seemed, to Donald, to be a performance almost as complex as the yacht build itself. He’d tried to intervene but in the end realised the launch wasn’t about him or the yacht. It was a celebration of those who had built it – not Luca, not Donald’s team nor the designers, but the artisans who had crafted each piece of wood and metal; the craftsmen who had welded steel and aluminium; the workers who applied layer upon layer of filler, and sanded the hull and superstructure, and spray-gun-painted the deep blue of the hull; the sparkies, the chippies and the grease monkeys.

There was still about six weeks of work to be done before Donald could unpack his suitcases and head off on his maiden voyage. He’d got the message loud and clear. The yacht wasn’t going to be perfect. He’d renovated property before so he knew about snagging … but the question now facing him was ‘how much more snagging?’. When did the snagging stop and when would the boat be finished? Donald had a real sense that the builder was rushing stuff. There were penalties to be paid to Donald if the builder was late and it was now perilously close to those penalties kicking in.

From what Luca had told him, the yard was doing the equivalent of sweeping things under the carpet and hoping no one would notice. Luca had noticed, and Donald would definitely notice, but on the advice of Nigel, his friend and broker, he wouldn’t beat them up about it. Nigel’s words were clear, “Penalties are no substitute for a boat you cannot enjoy because it isn’t right.” Donald remembered those total quality management courses he had been on in the early 1990s. Get it right first time, every time, so he had cut them some slack. But that was for another day. Today was the launch.

Donald and Sofia had flown in the previous night and stayed in the best hotel in Viareggio. It wasn’t quite The Dorchester, but was charming nonetheless and had a seaside grandeur all of its own. Many of the hotels in Tuscany were charming and the Grand Hotel Principe di Piemonte was no exception. It faced the Piazza Puccini overlooking the sea and screamed Italy in the 1920s, with its sweeping staircases and ornate salons.

Now late February, it was bright but Viareggio was desolate. The promenade would not be busy for another six months. Donald and Sofia stood at the top of the steps, each wrapped in large oversized Gloverall duffel coats, he in navy, she in camel. A gun-metalgrey Range Rover with English plates pulled up at the kerbside and Donald recognised it as Nigel’s car. After Nigel’s cheery greeting of ‘What Ho!’, the doors were opened by the hotel footman and they were soon speeding towards the yard.

Nigel then launched into a breathless stream of consciousness. “That leak in the owner’s shower has been fixed … there’s a little damage to the floor but they’ll fix that in the summer … the glasses from Baccarat have arrived … the plates are here, the sheets … one of the jet skis has a problem with its ignition … the rescue tender doesn’t get here until next week … and the yacht was crawling with workers until half an hour ago …”

Donald interrupted Nigel, laughing as he did so. “Take a breather! We’ll see her for ourselves soon enough.” Then, as they drove into the shipyard, there she was, much as Donald had imagined her except she looked bigger than her 47 metres. Donald clambered out of the car. He had seen her before many times but not looking this beautiful.

For a moment, he was a child again and the small battery-powered toy motor cruiser was before him, but this time considerably more substantial.