Lifting the lid on Italian made 50m motor yachts 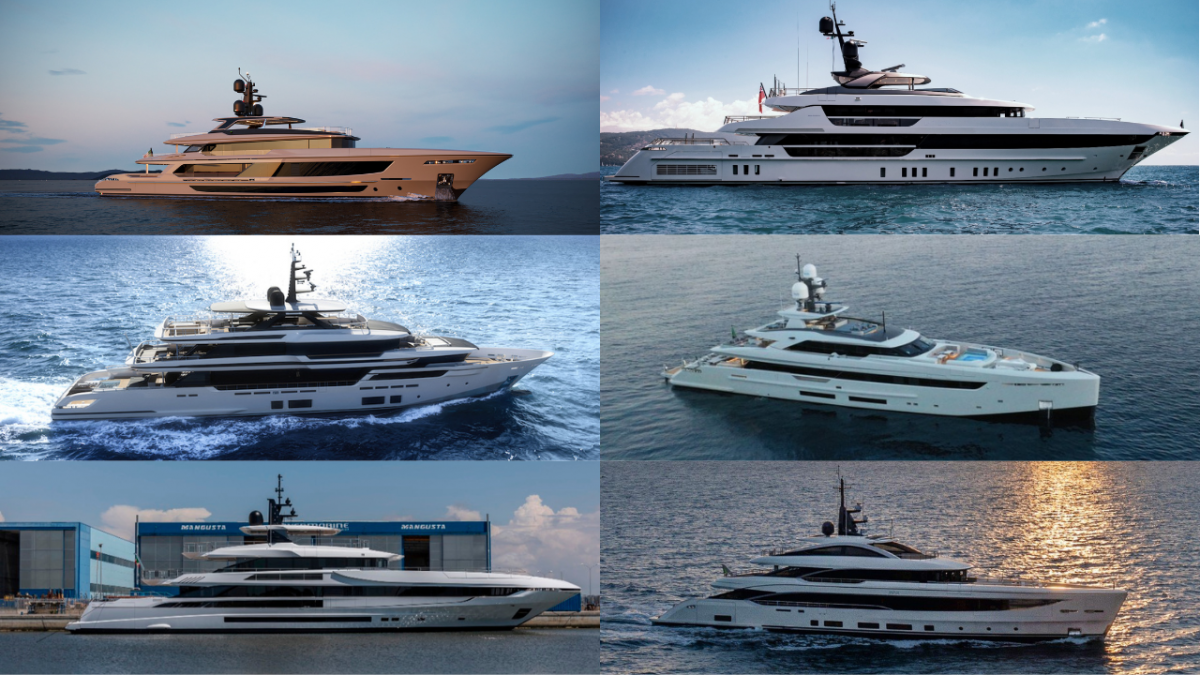 Everyone loves a classic, easy-on-the-eye Italian hunk, the only problem is choosing the right one. It is a bit of an audacious fantasy to consider being a potential client on the hunt for a 50m motor yacht, however, there is value in examining this particular sub-sector. The six semi-custom Italian 50m motor yachts listed below have been chosen not only because of their success in the market but also because they each display intriguing similarities and differences.

We’ve established that there are plenty of self-proclaimed ‘dreamboats’ out there, but how would a potential client actually differentiate between brands offering a relatively similar product? The shipyards highlighted below have their own idea of what the perfect 50m motor yacht should look like, neither is necessarily better than the other, but ultimately, personal taste, price tag, and delivery time will be the deciding factors for a potential client looking for a particular kind of motor yacht.

As a disclaimer, it should be noted that all of these yachts are customisable to a variety of extents depending on the shipyard. Also, this is by no means another digital brochure or god-forbidden 'listicle' that advertises and advocates for each and every brand - that would be pointless. What this aims to highlight, is the scope and depth of the market - very rarely does anyone put similar yachts side by side and question their differences. Perhaps this yacht is faster, but that other one has got a swimming pool and a jacuzzi, that one has a bigger beach club, but this one has better green credentials… you get the gist…

Below we have distilled the core specifications and features of these yacht models so that the reader may interpret each model as they choose. The similarity between some models is apparent, whilst others stand out for particularly innovative features, but it does beg the question, where is the evolution of design heading in the superyacht industry? The majority of these models boast expansive beach clubs, designs which blend the interior with the exterior, and sleek yet classic exterior lines. Is this the future of yacht design, or is it merely a design trend that will fade over the years? We will leave that up to you to decide... 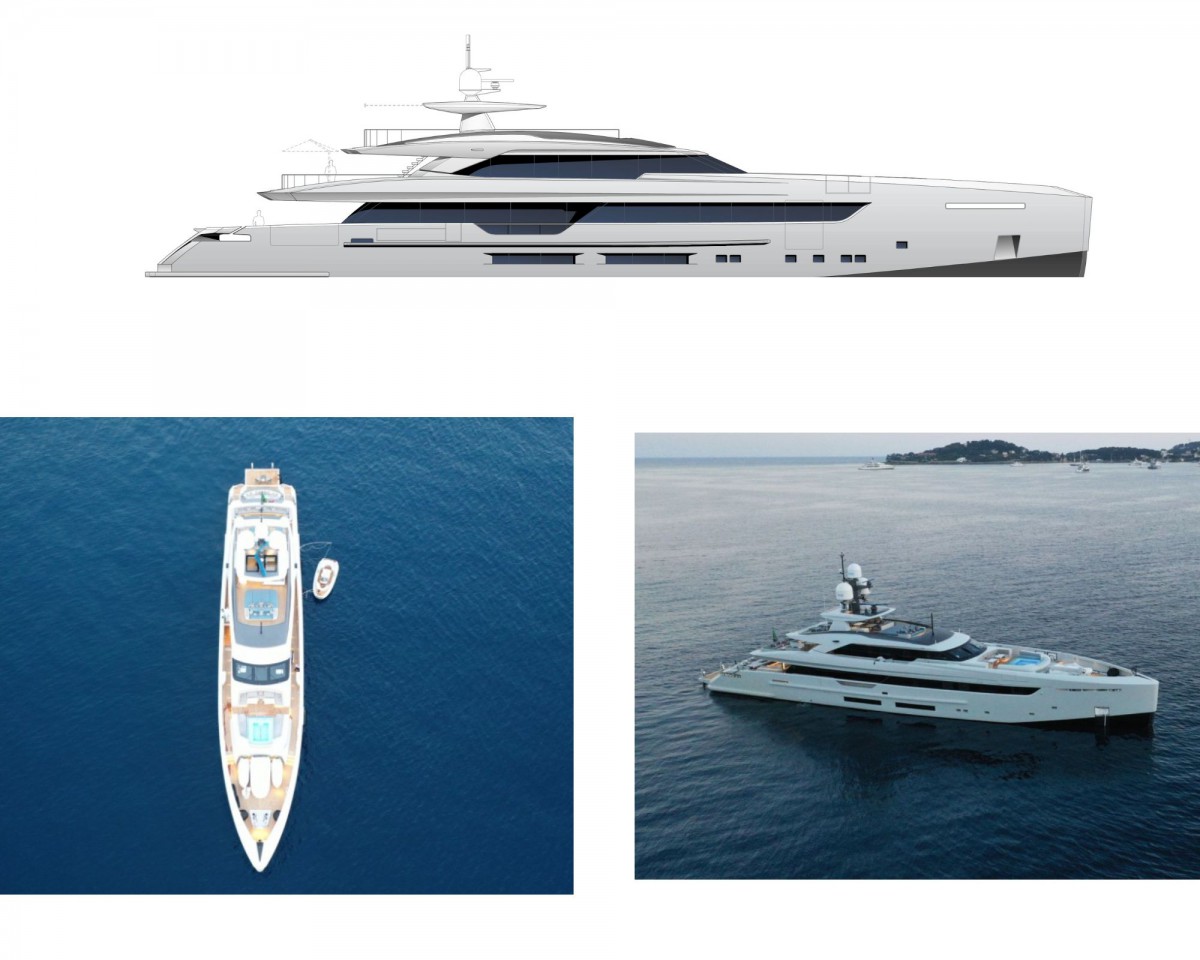 We begin with the Tankoa S501. For this yacht, you can choose between traditional and hybrid propulsion systems. Two unique specifications, but both are relatively fuel-efficient and near silent. The yacht features glass bulwarks and fold-out balconies to create uninterrupted views onboard. There are a generous number of relaxation areas, but it all fits under 500 gross tons thanks to its aluminium hull.

The hybrid model offers a Diesel Electric Mode (DEM), which is made up of two variable-speed generators that feed the electric motors. With the main engines off, the S501 can achieve speeds up to 10.5 knots and a fuel consumption rate of 12 litres per nautical mile.

In Hybrid mode, one of the two main engine shafts generates the electrical power to run the second motor for propulsion and hotel loads. At 12 knots the yacht has a cruising range of 4000 nautical miles. In this mode, the two diesel generators are turned off during navigation and the running hours per engine and per generator are dramatically reduced. In Booster Mode, both main engines and generators supply power to the two electric motors and feed the hotel loads. The yacht can reach a top speed of 18 knots with no strain on the engines.

Tankoa pride themselves on being truly customisable, they argue that their ability to be flexible with the demands of their clients is what sets them apart from their competition. This might be why the S501 is their best seller, they have already launched 4 units, and they will soon be launching the fifth and sixth hulls. 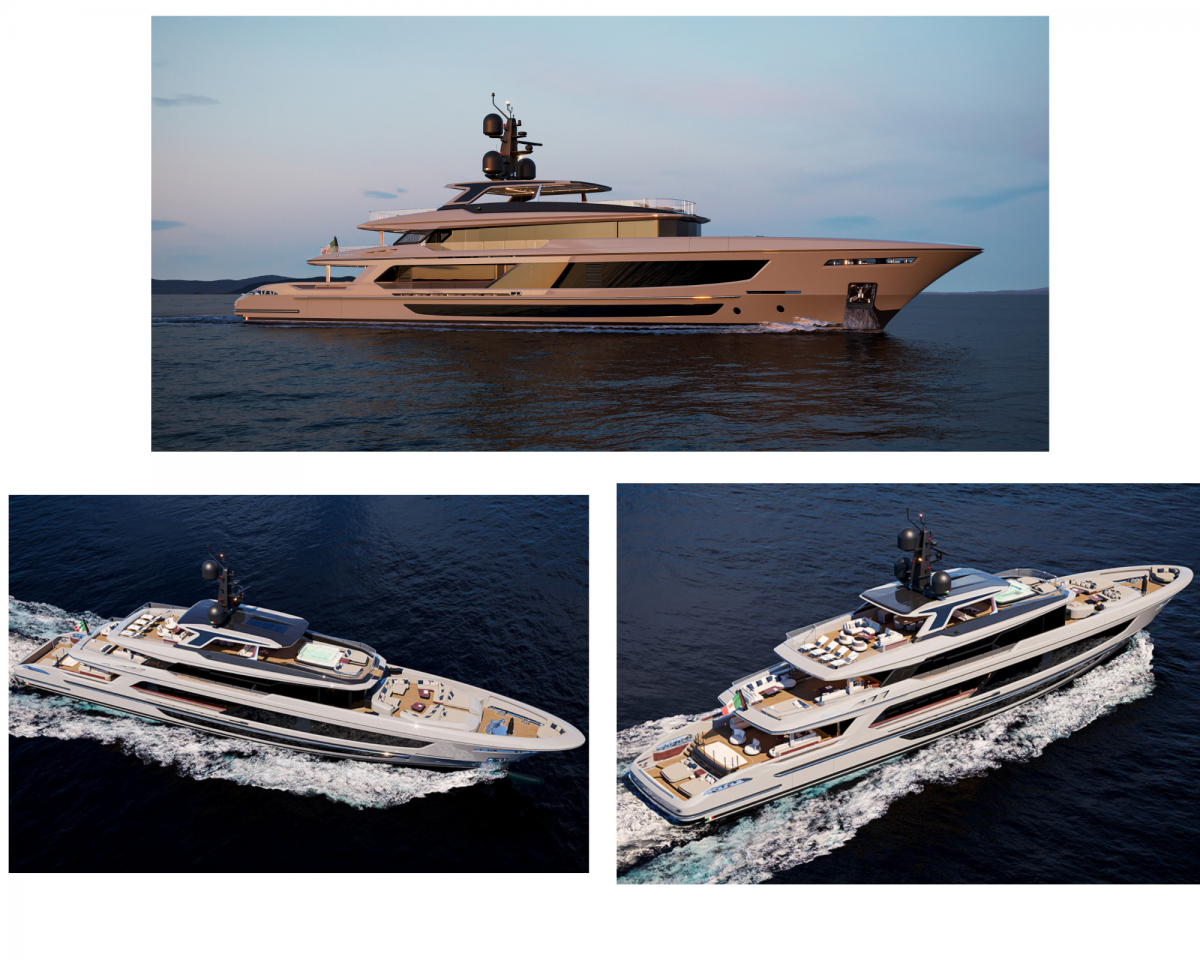 The next yacht is the Baglietto T52. Earlier this year they sold their sixth hull, and it too features hybrid propulsion. When cruising in electrical diesel mode, the yacht will be able to remain at anchor for up to 12 hours relying on the batteries alone. However, its two Caterpillar C32 engines will also allow it to reach quite a maximum speed of 16 knots and a range of 4,500 nm in traditional navigation mode.

Designer Francesco Paszkowski aimed to make the design slender and sleek but also wanted to reflect Baglietto's contemporary soul. It features an original open stern and a beach club that develops over 3 different levels. The large pool can easily be concealed thanks to an up-down moving flooring system that further extends the available deck surface when the pool is not being used.

On the upper deck, the wide floor-to-ceiling windows open on 3 sides to create a pleasant "al fresco" lounge, with a conversation area and a dining area that has been designed to be enjoyed under any weather condition.

The approximately 24-metre-long sundeck is another distinguishing standout feature on Baglietto yachts. Baglietto is making a serious push to reduce their emissions, the Bzero project exemplifies its commitment towards increasingly sustainable and eco-friendly yachting. 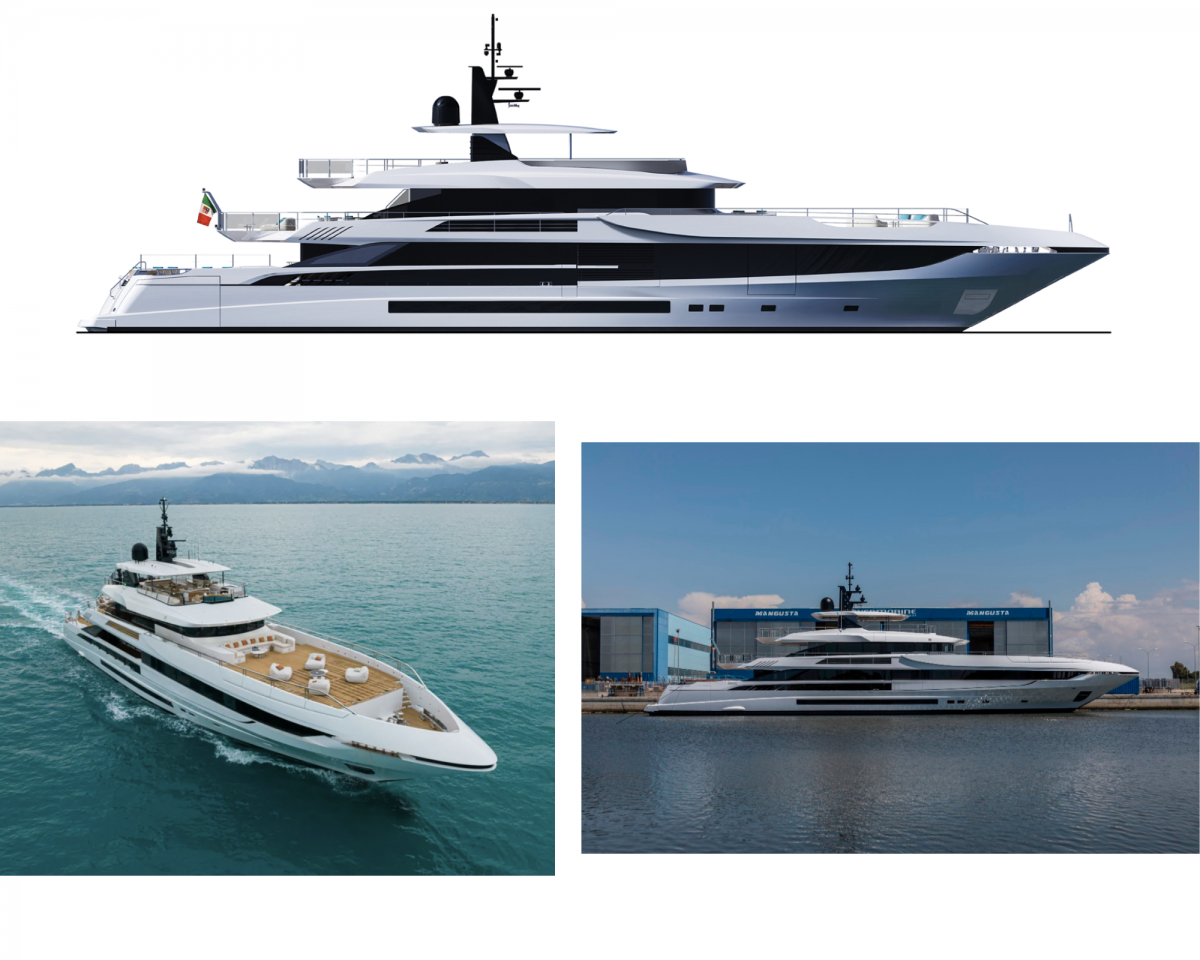 The Mangusta Oceano 50 is a displacement yacht with a steel hull and an aluminium superstructure. The outer lines have been pencilled by Alberto Mancini, who worked side by side with the shipyard's engineering department to make the most of and optimise the vessel's exterior and interior spaces while still falling within 500GT. Naval architecture has been taken care of by engineer Ausonio’s design firm P.L.A.N.A. Design. Its most striking features include the 68 sq. m beach club area and sauna.

On the main deck, the aft cockpit aims to reflect a harmonious continuum with the salon and the exterior - an effect that is further magnified by the two large side sliding doors. The bow area features a stylish cockpit located above the garage, which, once the tender has been launched, can be filled with water to obtain a 6,5 x 2,6 x 1,3 m (depth) swimming pool with a counterflow system.

Another Jacuzzi pool can be found on the sun deck. This area is completed by a relaxation area and a dining table that can seat up to 12 people, sheltered by a full-width hard top. Stepping indoors, this vessel has a 5-cabin layout on the lower deck, with four guest cabins (2 standards + 2 VIP) and a full-beam gym - if it is requested by the owner. The master stateroom is located on the main deck and is fitted with a dressing room and an exclusive fully-automated balcony overlooking the sea. 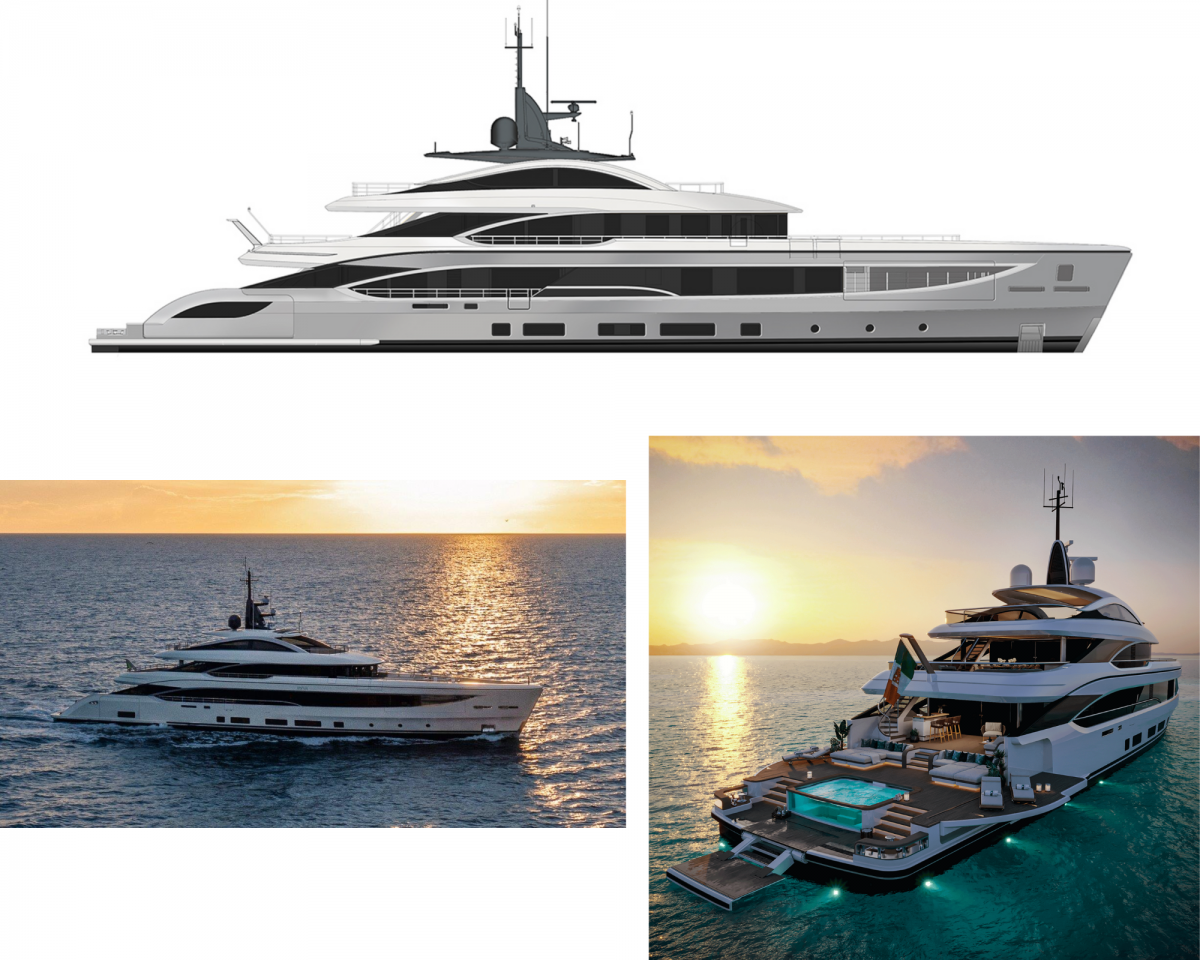 The Benetti B. Now is a very new model. “Iryna”, was the first B. Now 50M, it was built for a Ukrainian owner. On this particular yacht (which is not for sale), the Oasis Deck along with the built-in pool in the beach club area offers a 270-degree field of view from the stern area.

The interiors are the result of collaboration between Benetti’s Interior Style Department and Visionnaire, the interior designer was chosen by the owner and is an emblem of the ‘Made in Italy’ style. Like Benetti itself, Visionnaire produces projects tailored to its clients’ desires and has created a modern ambience with unique furnishings.

The claddings and ceiling panels are made with fine woods, such as silk-coloured satin-finish frisé maple contrasting with oak. An ivory-coloured leather was chosen for the ceiling and palladium - a precious metal in the platinum group - is used in manually applied, leaf-shaped satin-finish details.

Key features of the layout include the gym on the Upper Deck, roomy relaxation and sunbathing spaces, and the outdoor lunch area on the Main Deck, which also has an indoor saloon with a lounge and dining zone, as well as an owners’ suite in the bow with a private balcony.

The hull was designed by P.L.A.N.A Design in collaboration with the Azimut|Benetti Research & Development department. The yacht has a range of 4,500 nautical miles at 12 knots and a top speed of 15 knots. 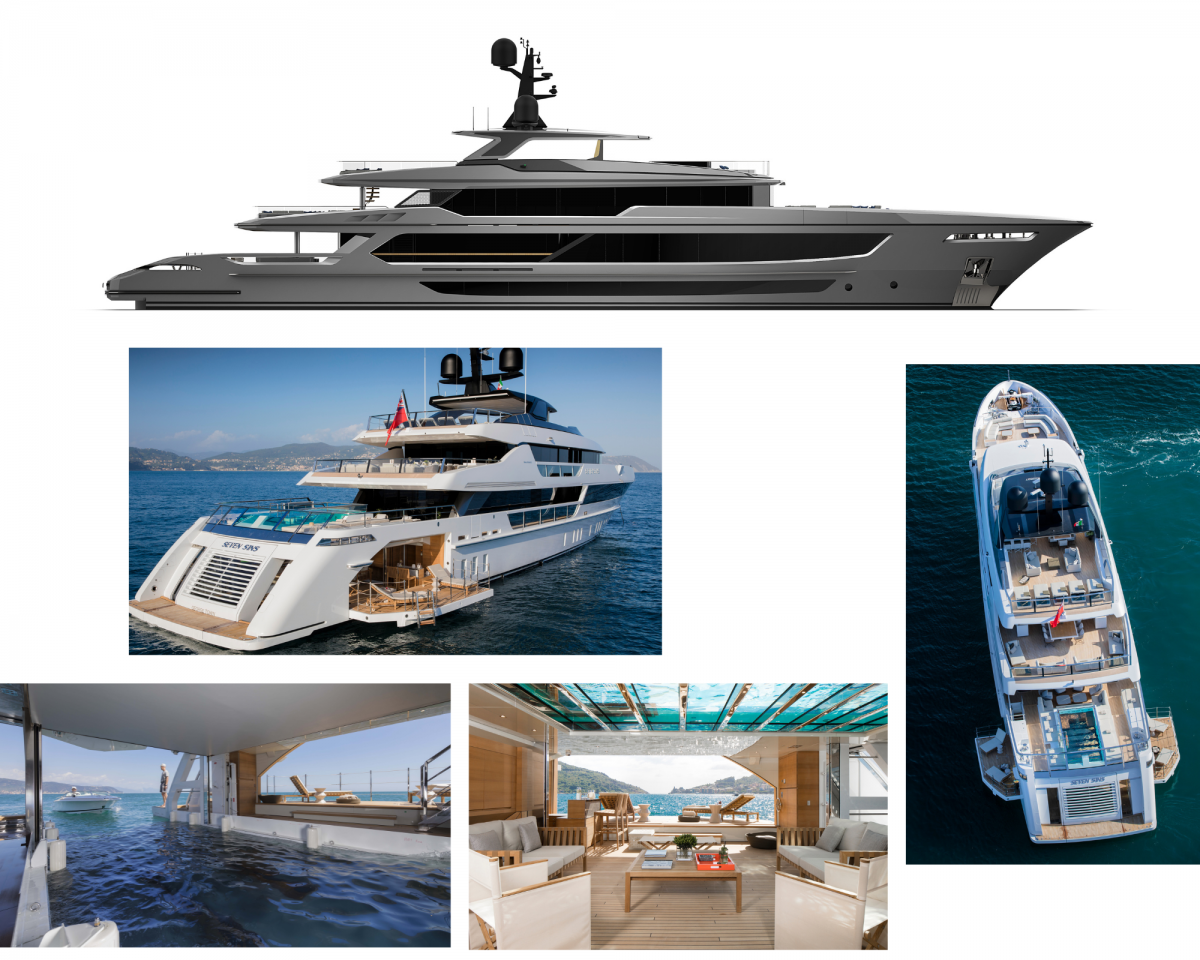 This model is built on the experience gained from the successful 46Steel. The 52Steel is a five-deck superyacht with a massive amount of customisation possibilities that combines the classic lines typical of a yacht signed by Sanlorenzo, together with forward-thinking technical innovations. Large internal volumes and comfortable outdoor spaces combine to make this sub 500GT yacht.

With its modern profile, the 52Steel aims to represent true innovation with the design of its stern: It features a swimming pool with a transparent bottom placed on the main deck, which lets light through to the underlying area. There is an exclusive beach club area resulting from the doors opening on three sides, which become sea-level platforms. The same area quickly turns into a floodable garage that contains the shipowner’s tender.

The LOA of the vessel is 52m and the beam is 9.35m. The superyacht features 2 X CAT 3512 C engines with a 55,000-litre fuel capacity which gives it a maximum speed of 16.5 knots. It is capable of accommodating nine crew and between 9-12 guests depending on how the owner prefers to customise it. 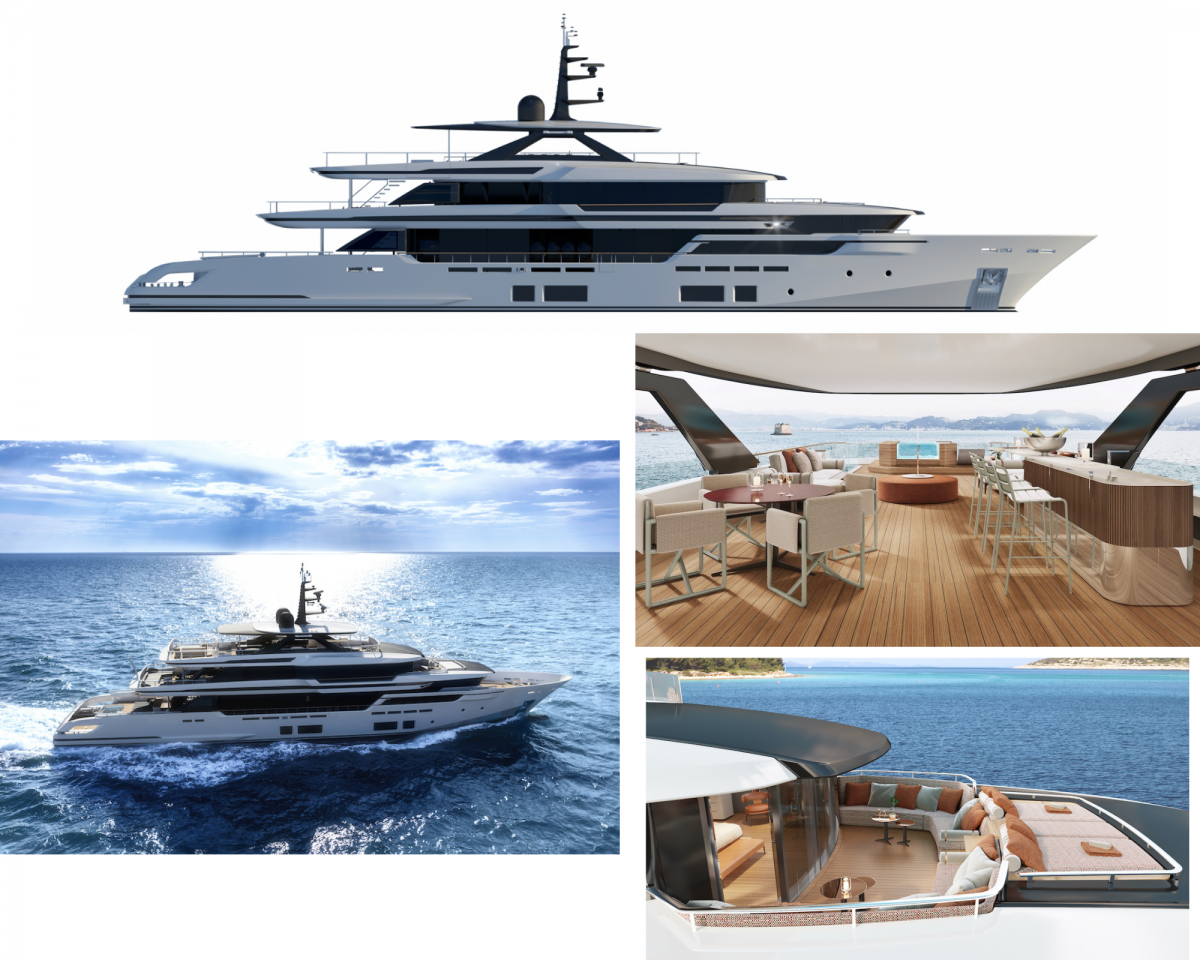 The Custom Line Navetta 50 is the company's new flagship and they’ve described it as ‘an aluminium dream’. It features an upper deck master suite and a sophisticated architectural interior design by ACPV ARCHITECTS (Antonio Citterio Patricia Viel). Its LOA is 49.90 m and it has a beam of 9.60 m.

The interior design focuses on the use of sustainable materials, including natural leathers, used both in the finishes and in the detailing of the custom-designed furnishings. It features a beach club which links to the aft outdoor area on the main deck, which is fitted out as a private lounge and leads to the rectangular pool in the stern.

Other features include an outdoor area in the bow that can be used as a lounge and for refreshments. It is joined by over 70 square metres of interior space reserved for the dining area and American bar. The bow area on the sun deck can also be customized with a Jacuzzi and solarium. As well as the master suite, Navetta 50 offers the owner and guests four guest cabins on the lower deck, accommodating a total of 10 people on board and nine members of crew.

On the sustainability front, the use of aluminium rather than steel, which weighs three times as much, cuts consumption by about 10-15% on a 50-metre boat of the same size and volume (GT). The best efficiency is obtained at low rpm and the cruising speed for which the vessel is designed, with an increase in the range measured in nautical miles estimated at 10-15%. Custom Line Navetta 33 Hull#01 will also be SCR ready (Selective Catalytic Reduction). The available finishes include Alpi Lignum walnut panelling, a living, certified and eco-sustainable material that complies with the strictest international standards.

So there we have it. Over the course of the year, and in the lead-up to The Superyacht New Build Report, we will be analysing and comparing different models in the same category to better understand the market and speculate where the future of the new build design is heading. Please feel free to engage in the survey below and offer your thoughts and opinions...

Two launches in two days at the Baglietto shipyard