SuperyachtNews.com - Fleet - Report into the fire of M/Y Siempre in 2021 surfaces

Report into the fire of M/Y Siempre in 2021 surfaces 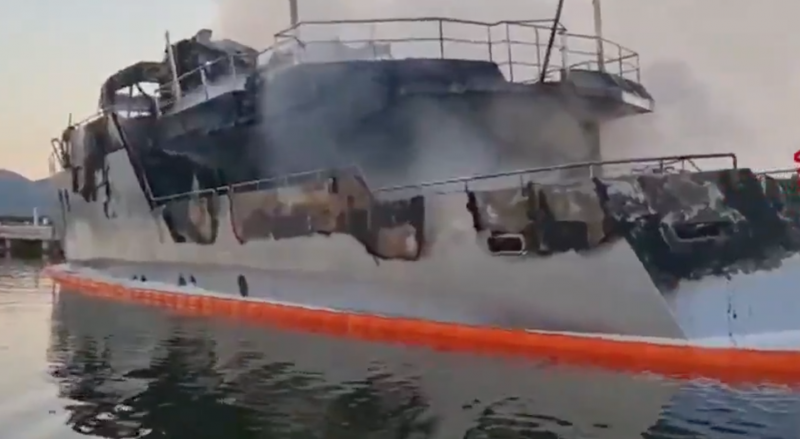 On the 6th of September 2021, SuperyachtNews reported that the 35m motor yacht Siempre had sustained significant damage after catching fire in the Port of Olbia, Italy. No loss of life was reported, with the 4 crew members reported safe and in good health, however, the vessel was marked down as a constructive total loss. The Malta Marine Safety Investigation Unit (MSIU) said it had been unable to pinpoint the exact cause of the fire, but evidence suggested it most likely began in the Li-ion battery of an electric hydrofoil surfboard.

Lithium-ion batteries have been in the headlines for all the wrong reasons this season and this timely report highlights the potential dangers they cause to superyacht crew and owners.

The fire onboard the UK-managed superyacht was not being chartered at the time of the fire. The fire began during the night while the crew were asleep, luckily the British and Spanish crew members were woken up by the fire alarm, and after a failed attempt to extinguish the yacht, they eventually jumped overboard. They were then rescued by a tender from a neighbouring yacht in the marina.

Shore-based firefighters then continued to battle the fire, using water and foam. Even after the night of the 6th of September, several further interventions over the following two days were required when flames and smoke emerged from parts of the vessel that were above the water level.

In a report released by Malta's Marine Safety Investigation Unit (MSIU), it was noted that there had been a number of similar recent cases which have raised concerns over the fire-related risks of Li-ion batteries – including the threat of 'thermal runaways', violent cell venting and extremely high temperatures – and the difficulties of extinguishing them with conventional fire-fighting systems.

The MSIU said it had been unable to pinpoint the exact cause of the fire, but evidence suggested it most likely began in the Li-ion battery of an electric hydrofoil surfboard. Allegedly, crew members on a neighbouring yacht noticed the flames onboard reaching a height of 2.5m within a matter of just a few seconds.

Investigators also reported that the presence of several Li-ion batteries in the area where the fire began would have allowed it to intensify and spread even more rapidly. The report states, 'Once the fire had intensified and spread to the leisure equipment, fitted with combustible components, it did not take long for the various flammable fittings, fabrics, wood panels, etc, to contribute to the fire spread through most of the yacht and before the fire could be brought under control’.

The MSIU said the crew members appeared to be fully aware of the risks associated with Lithium-Ion batteries and that they showed knowledge of following advice received from manufacturers, as well as ensuring that the recharging of the batteries and leisure equipment was always monitored. With that being said, the report also states that they may not have been fully aware of the risks presented by a faulty battery as the disposal of the dead battery had not been completed in the two months since the replacement arrived.

It should also be noted that the safety investigation did not exclude the possibility that the fire may have also started due to a short circuit in the electrical power socket of the yacht’s water scooter.

The report also made the following recommendations after the incident:

- Issue a formal notification to all crew members serving with the Company, advising them of the hazards posed by Li-ion batteries.

- Establish written procedures to guide all crew members serving in the Company, on the proper handling and disposal of faulty/dead Li-ion batteries.

The general reportage of yacht accidents and fires unfortunately tends to fall under the category of ‘click-worthy’ news for the majority of online news outlets. However, by highlighting and sharing comprehensive reports such as these, the yachting media can help to create a more transparent industry that is less prone to these kinds of accidents. To stay up to date with our latest insight on the causes of yacht fires and incidents, be sure to sign up as an Essential Member…

The Superyacht Owner Report is Out Now!