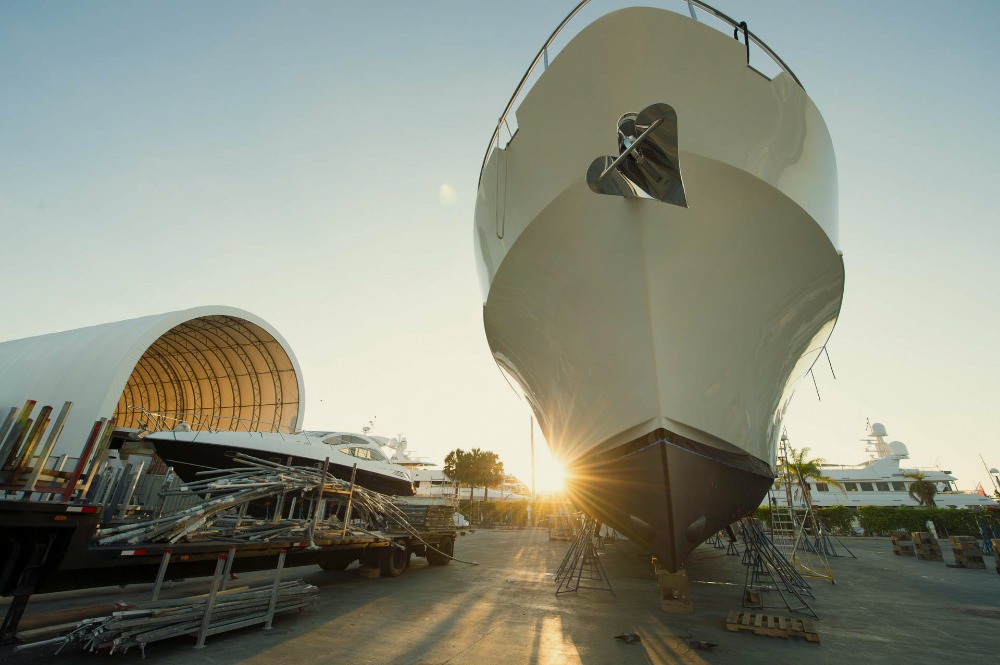 In light of the coronavirus crisis and the diminished Mediterranean yachting season, SuperyachtNews speaks with Lauderdale Marine Center about operations across its facilities and the outlook for the coming months, as well as exploring the developments and strategies that are ongoing at the facility.

“Very early on, based what was happening in Europe, we put together an operating plan for those companies that work here, as well as the vessels, to follow in order to stay open,” starts Doug West, Lauderdale Marine Center’s president. “At the beginning of March, we developed a plan in collaboration with the Marine Industries Association of South Florida, the city of Fort Lauderdale and Broward County. We went back and forth fine-tuning it and they accepted it within three days of the original submission. As with other businesses, it made social distancing a requirement, it made cleaning any of the shop spaces or office spaces mandatory, at least three time a day, and it required face protection to be worn if you were going to be within six feet of anyone.”

As well as the conditions for working at LMC, the business required that all those who could work from home did so, and crew were given guidelines for when they left their boats. If any crew have come from a foreign port, they were required to quarantine for 14 days from the time they began their journey. Additionally, LMC restricted working on the weekend, reducing the working week to five days. Once confirmed, the requirements were communicated to the various tenants and teams on site.

“Everybody was incredibly receptive and cooperative and we really haven’t had any issues,” continues West. “None of our tenants, employees or crew that we have been made aware of have tested for coronavirus. We had a number of people tested as a precaution, but none proved to be positive.”

West explains that May is typically a busy period for LMC as superyacht prepare for their summer trips. However, unlike previous years, the facility became busy in March when lockdown begun.

“Our marina was completely full for the month of April,” says West. “In May, some works started, but we also had a lot of owners who wanted to use their boats to quarantine on board, although it became clear quickly that there was nowhere for them to go. If you look at our occupancy levels between 2019 and 2020, May is almost identical, although there are more yachts in the water than out of it, which is the real differentiator. However, when we look at July, we had already surpassed the amount of revenue generated in 2019 before the month had even started and we are predicting a significant increase in revenue on June last year.”

With many owners unable to use their boats in the ways that they desire, many have relied on facilities such as LMC throughout this period of uncertainty. However, West reports that owners are already using their boats for domestic trips in Miami, Palm Beach and the Florida Keys. Furthermore, with restrictions in the US due to lessen and the Bahamas projected to open on 1 July, it seems to be only a matter of time before usage starts to pick up once again. Additionally, with many eager superyacht owners having been unable to complete the works they intended to in spring, West is predicting a busy Fall for the US refit industry, with LMC specifically receiving enquiries for slots in September, October and November.

In May, Ferretti Group announced a $15 million investment plan for the US, centred on facilities in LMC. West confirms that the Italian shipyard group would be leasing 30,000sqft of workshop space and around 3,000sqft of office space on a long-term deal, as well as renting yacht slips on an annual basis.

“Targeting yacht builders has been part of our strategy since 2017,” explains West. “We signed a lease with Benetti in the same year, who were later joined by Ferretti and Cheoy Lee. These yards are using facilities at LMC to complete warranty and aftersales work in the US. We also have our Yard of Choice programme that allows yards without a permanent base, such as Majesty and Sanlorenzo, to complete warranty work here.”

One of the traditional complaints against the US refit market is that, because of the subcontractor system that is operated, there are occasionally issues with quality control. West believes that this is exactly the reason that shipyards, including major European yards, are choosing to operate at LMC. Unlike other facilities, he asserts, LMC vets its subcontractors and further requires them to provide warranties, quality control programmes and a number of standards.

“As part of our plan to attract strategic tenants, we have reconfigured most of our workshop space and most of our office space. The previous setup was that there was a lot of small spaces that were leased out. But if you want to get a good quality contractor you have got to give them room. When I first got here in 2015, we had 72 tenants, today we have 30, but we have more square footage than we previously had,” says West.

Throughout the COVID-19 pandemic, LMC has adapted to the various requirements for the new working environment and, by dint of a diminished Mediterranean cruising season, has enjoyed a profitable period of business. With European shipyards increasingly attracted to the facility and a strong performance predicted for this Fall, LMC appears to be in a strong position moving forward.

Superyachts contribute over $63M to the Australian economy