The Superyacht Group were recently invited on a tour of some of the biggest shipyards in Italy, here is our take……

As of recent, it hasn’t been the best of times regarding the general perception of the superyacht industry. From the outside it appears battered and bruised, meekly trudging out of the spotlight after an unprecedented bashing from the mainstream media. But as the dust settles, it seems there is more to be said about the robustness and resilience of the new build sector, than there is about the devastation of clickbait journalism. The Italian yacht building industry, which is responsible for having built roughly 30 per cent of the current superyacht fleet, not only claims to be relatively unaffected by Russian sanctions, but to be thriving with order books full of American and European clients. The Superyacht Group decided to investigate further with a tour of the region organised by the Italian Marine Industry Association. 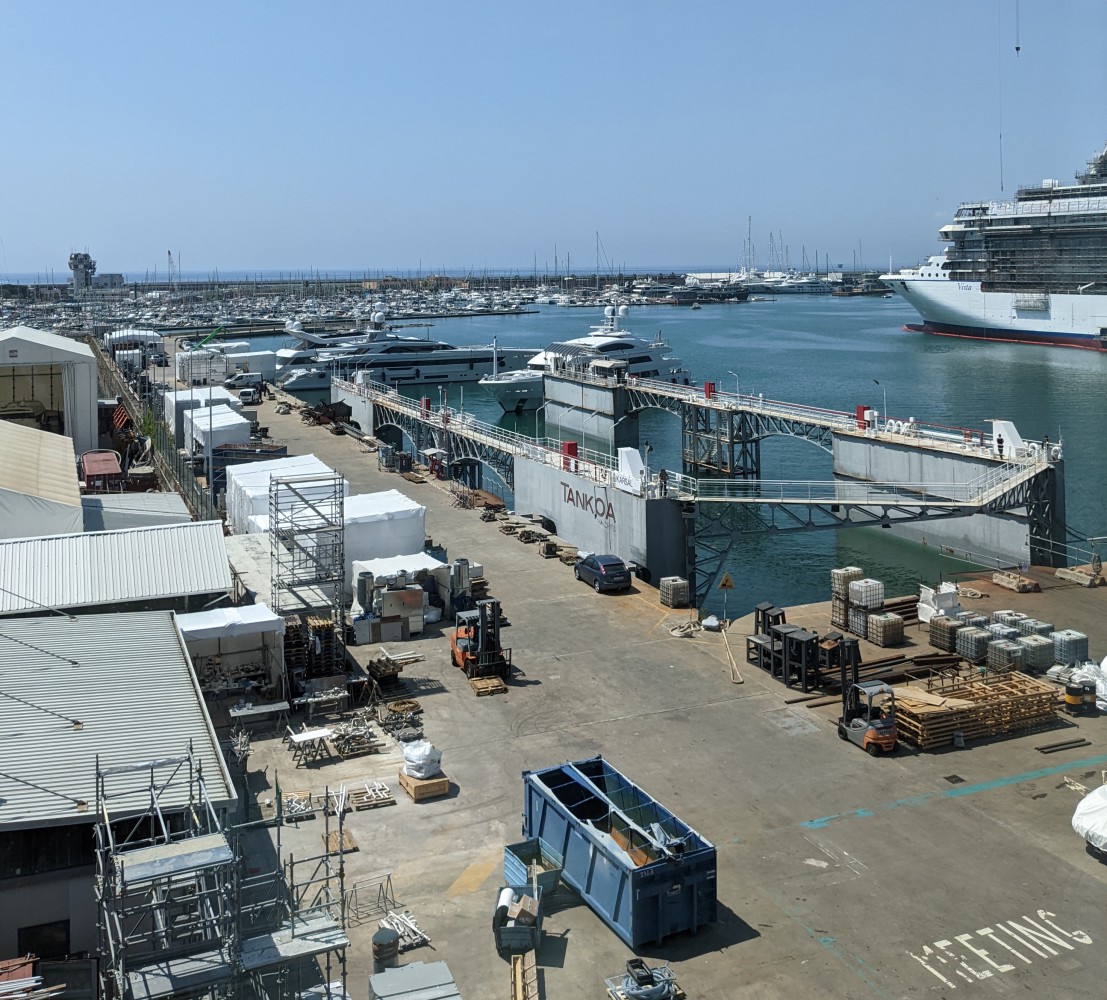 The first shipyard of the tour was Tankoa – a relatively new shipyard that relies on innovation and quality as a unique selling point rather than reputation and legacy. With just six Tankoa yachts currently an active part of the superyacht fleet, the yard is currently expected to double that number in the next three years. Tankoa will deliver two yachts this year, one yacht the following year, and four yachts in 2024. Following 2024, the goal is to maintain momentum and build four to five yachts every year from then on.

The company has not been directly affected by the Ukraine crisis but admits that there have been some issues regarding the supply chain and the rising cost of raw materials. Looking beyond the order book, Tankoa is making a concerted effort to champion hybrid technology, however, so far none of their current clients has opted for a hybrid engine on one of their custom yachts, which rings true with commentary provided by the market’s more candid stakeholders. 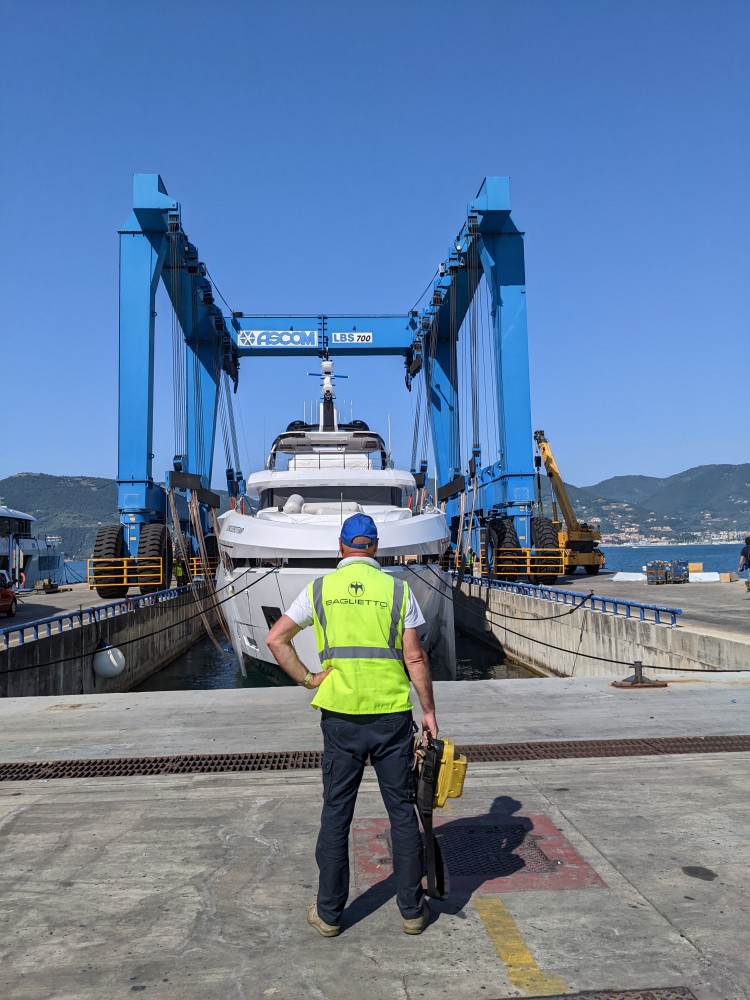 After departing the Tankoa Shipyard in Genoa, La Spezia, the next stop was Baglietto. Baglietto has recently become a titan in the new build sector, not just because of their financial records and number of yachts under construction, but also because of their commitment to reducing the environmental impact of their products. Baglietto has bet the bank on Hydrogen being the next sustainable future fuel in the marine sector, with their theoretical B-zero system involving the implementation of a hydrogen production module which uses filtered and deionised seawater. They also announced that next year they will install their first hydrogen station in their La Spezia facility.

Thanks to the DOM 133 and T52 ranges, Baglietto has an order book stretching into 2025 worth an estimated €300.5 million euros. 18 of the 21 yachts that they have under construction have already been sold and six yachts will have been delivered by the end of 2022, including a fully custom 38m named ‘Enterprise’. 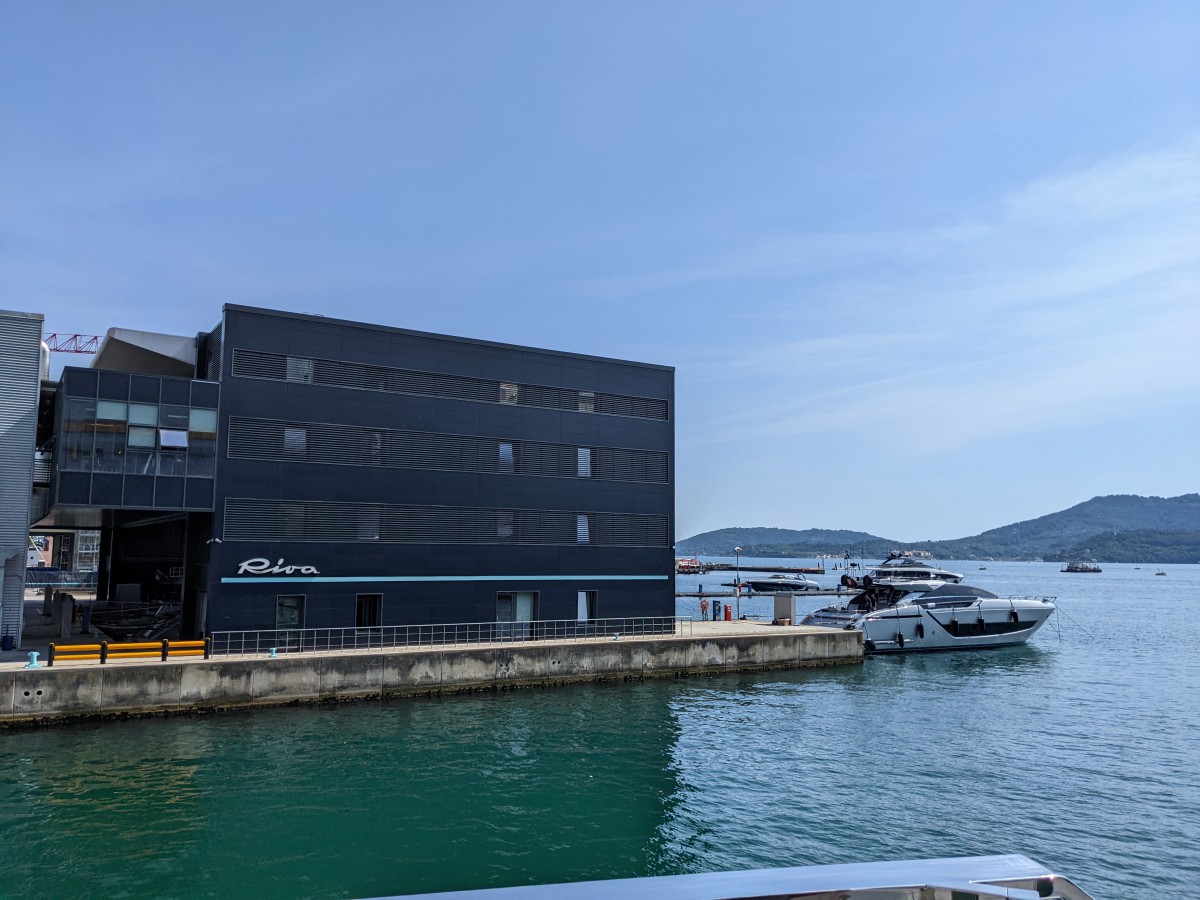 RIVA - Ferretti as seen from the Sanlorenzo shipyard

Riva - Ferretti is notoriously private about its performance, largely due to the fact that they are on the stock exchange. But having visited their shipyard in La Spezia we can say this - they are very actively pushing to build more and more yachts over 100 feet, and it doesn’t seem like the Russian sanctions have affected their superyacht division. In fact, in early March the Ferretti Group released the following statement:

With an order backlog of 1,272 million Euro as of 28 February 2022 and an Order Intake of 308 million Euro in the first two months of 2022, the Group, which is present in over 70 countries, has a geographically diversified commercial strategy and an exposure, in terms of revenues, of less than 3% to the areas currently involved in the conflict. Ferretti Group has no exposure to the mega and gigayacht segment - of greatest interest to the Russian elites most affected by international sanctions. Furthermore, as of today, the Group is not aware of any sales to subjects targeted by these sanctions. 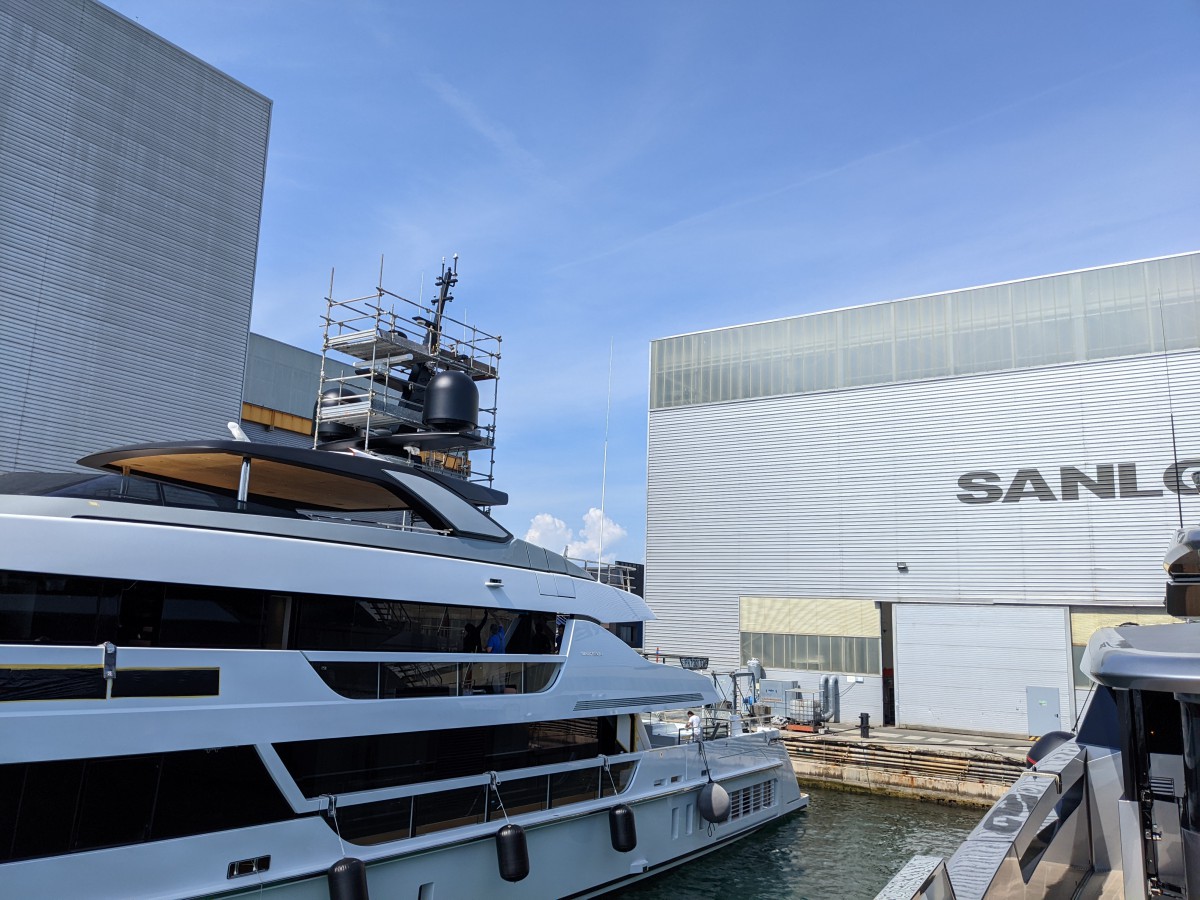 For Sanlorenzo, the exposure towards customers has been marginal, representing just 7.7 per cent of the backlog, spread over three years. According to the yacht builders, the sale of new builds saw an increase of €585.5 million in 2022 - a 28 per cent increase compared to the €457.7 million generated in 2020. The yard claim that these sales are primarily down to a growth in sales across Europe and the Americas. The sale of superyachts amounts to €179 million - 31.8 per cent more than in 2020 with the Steel-Line and the new X-Space Line played a major role in these financial records.

After an exciting decade of releasing new designs, securing a stable financial forecast, and investing heavily in their infrastructure, Sanlorenzo has now completed a major phase in its evolution under Massimo Perotti. The next step for the veteran yacht builders is to cement their role as true innovators in sustainable technologies and try their hand in different sectors of the market. Having recently signed an exclusive deal with Siemans energy, Sanlorenzo has announced that they will be building the first hydrogen/methanol powered motor yacht by 2024. 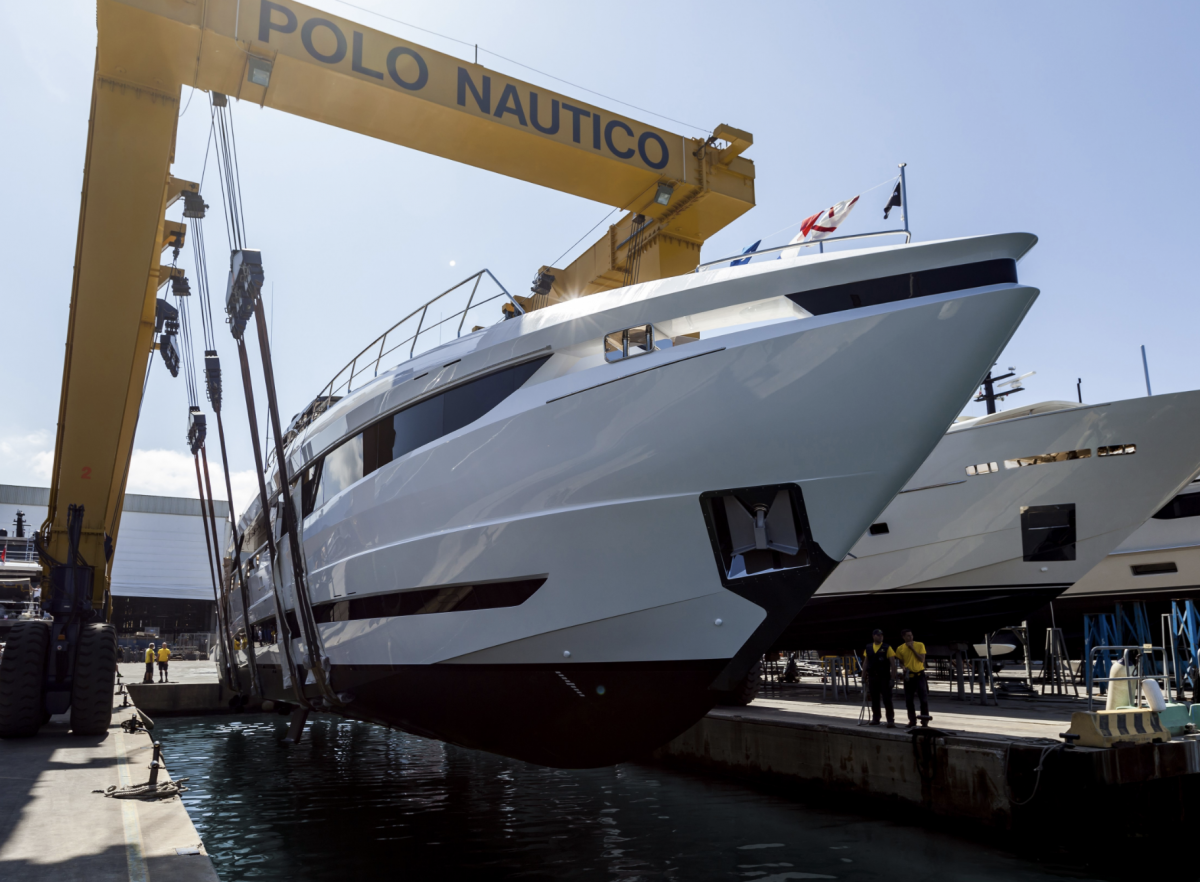 Overmarine, roughly 80 per cent of their clients are based in North America

Overmarine is currently fully focused on supplying yachts in the 40-60m bracket to their American clients. They are now in the process of building another facility to accommodate these ambitions - meaning they will have a total of 11 facilities. According to The Superyacht Agency, there are 17 yachts under construction with Mangusta and the shipyard confirmed that all their superyachts in build have been sold.

Arianna Toscano, head of image and communication at Overmarine Group stated, “In America, there was a migration of UHNWIs from New York to Florida, and this led to a boom in yacht sales in that region… we can say that roughly 80 per cent of our clients come from North America but we also see the Balearics and Isreal as regions with a lot of potentials to find new clients.” 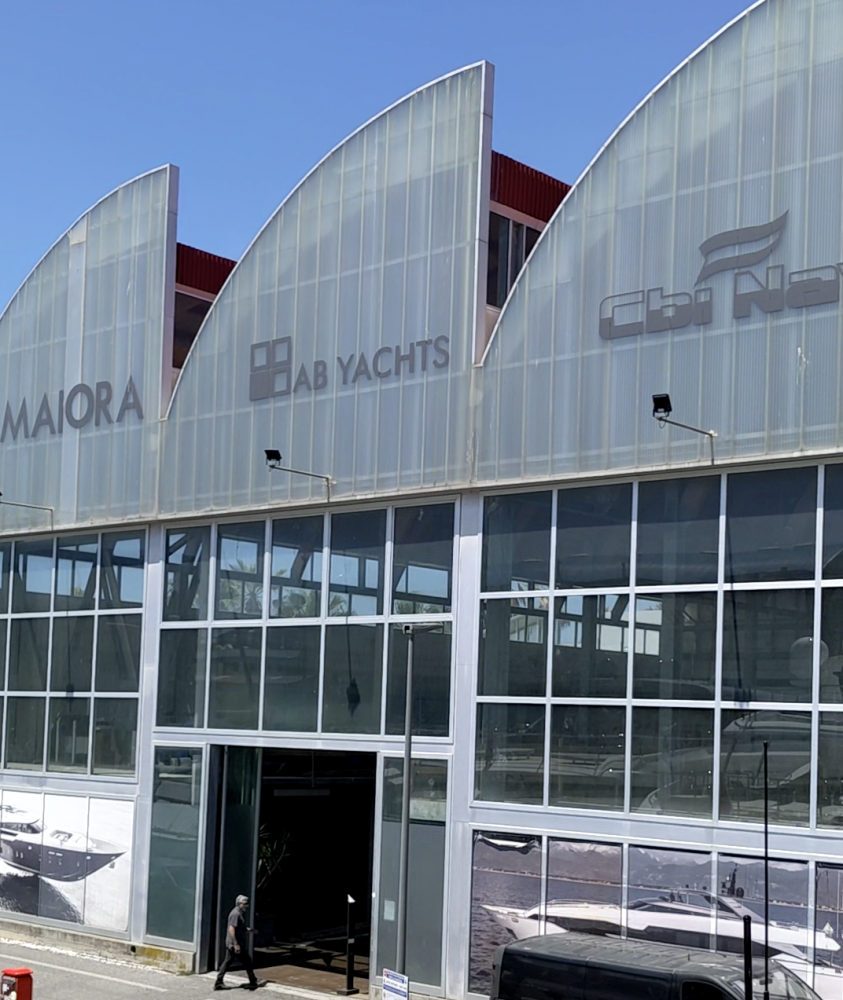 Next Yacht Group and the three brands under its umbrella

Although this article has mostly been about highlighting the resilience of the Italian new build sector, it would be remiss to not include an alternative perspective from one of the many market commentators that were visited on the tour. Gennaro Candida De Matteo, CEO of Next Yacht Group, suggested that the impact of the Russian sanctions has had a bigger impact on the yacht building industry than what is currently being broadcasted.

“I smile when I see such a small figure like three per cent, the Russian market is enormous, especially so in the 40 to 50-meter range.” Genarro explained that even his own brand, AB Yachts, has been affected by the sanctions on Russia. “We are of course now waiting to see what will happen with the situation in Russia…The AB Yachts brand is very popular with Russian clients because it is incredibly fast and it looks fantastic.”

Under the Next Yacht Group umbrella lies three separate brands, Maiora - which focuses on liveability, comfort and luxury, AB Yachts - this brand is all about adrenaline and performance, and CBI Navi - which aims to build fully customisable yachts of over 40m for its clients. This year the company will aim to deliver three AB 100 yachts as well as an AB 120, they will also add a Maiori 40 and a Maiori Exuma to their current fleet. 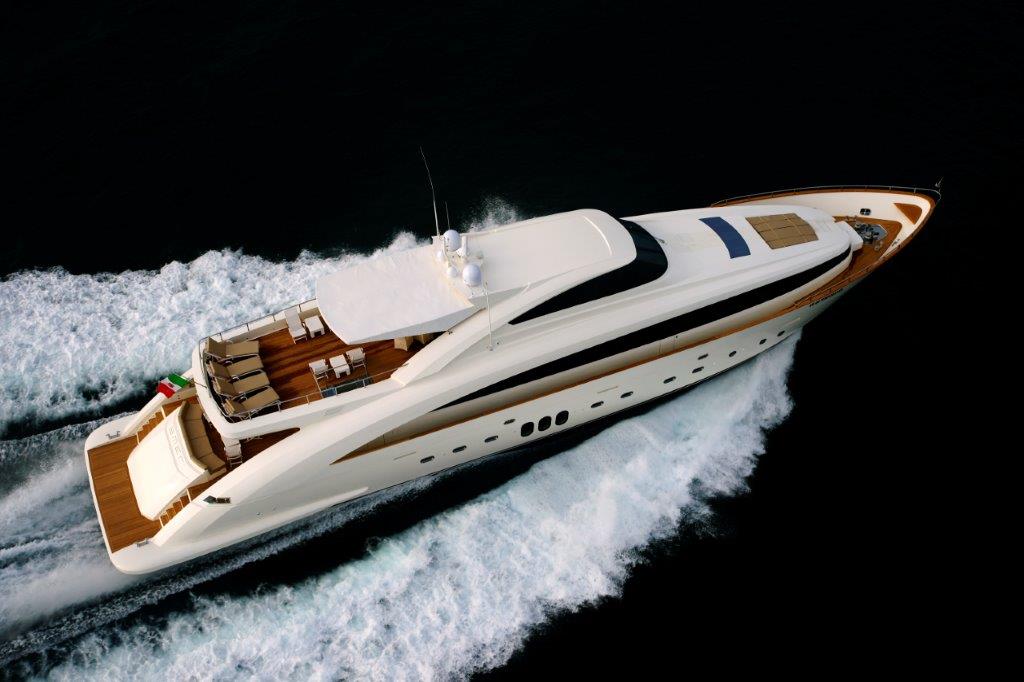 The final shipyard of the tour was the elusive Amer Yachts, a company which was founded in 1973, in Sanremo, Italy, by Fernando Amerio. Today the shipyard is a third-generation family-run business. The future plans of the shipyard are to launch the new Amer 120 Quad which will be powered by an IPS Volvo Penta 1350. They also stated that the orientation of the shipyard will be to focus on electrical propulsion and they have already started their own research program for this.

It will be interesting to see how 2022 plays out for the Italian new build sector. While it appears that there is much to be optimistic about, there are others who question the credibility of the statements that have been released regarding the Russian sanctions. Having visited the shipyards in person, there is no doubt that most Italian stakeholders are coping with a surge of activity, and most of the hulls that have been built on speculation have already been sold. There has also been a lot of chatter and commitment toward green initiatives, whether or not this will materialise into something more tangible and meaningful in the near future is another question.