SuperyachtNews.com - Business - A roundup of the Superyacht UK Technical Seminar

A roundup of the Superyacht UK Technical Seminar 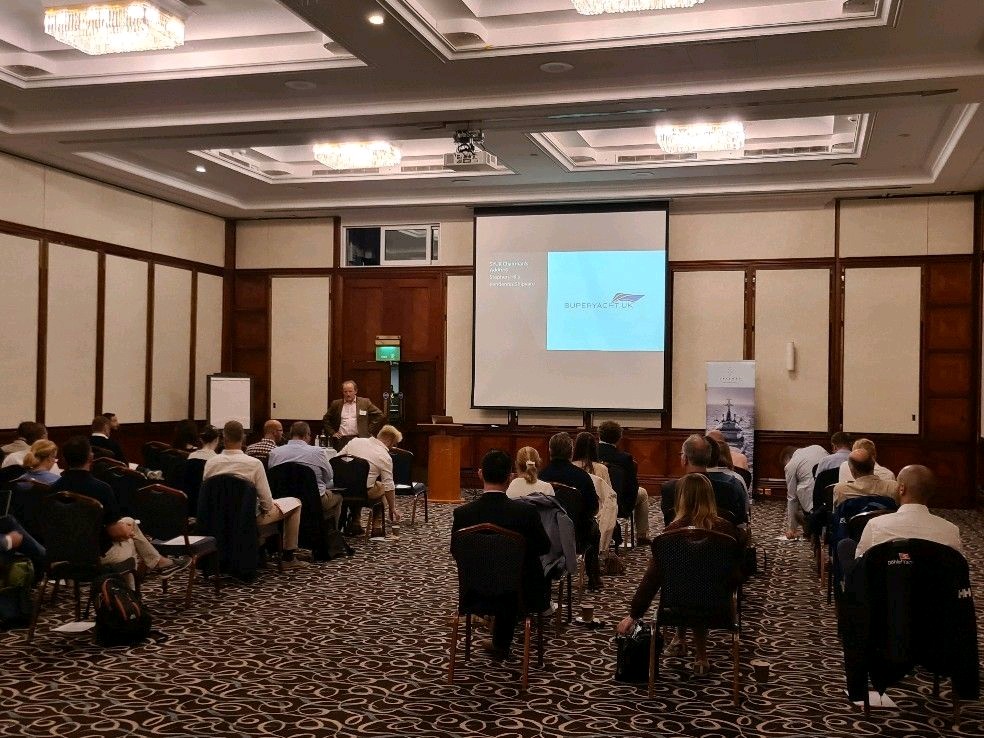 The Superyacht UK Technical Seminar took place at the Leonardo Royal Hotel In Southampton on Thursday 18th September. The attendees included a range of industry experts who were all present to discuss some of the biggest trends and talking points regarding the state of the market. As well as regulatory updates there were also some interesting speakers present to discuss some of the broader topics such as environmental impact and future innovation.

The morning kicked off with a seminar from the Cayman Islands Shipping Register who discussed the safe mooring for vessels over 3000GT. During the seminar the audience were walked through some of the safe-to-use designs for mooring arrangements as well as the need for proper maintenance, inspection and documentation. This was followed by Adam Jackson of the UK Ship Register who provided Tier III updates on the rule changes for sub 500GT large yachts as well as the REG’s position on the US Coast guards letter of non-enforcement. The morning was rounded off by a spokesperson from the CISR who revealed some of the IMO changes to Intact stability rules and how it will affect large yacht designs and certifications.

The afternoon seminars began with an update on the EU ship recycling/Hong Kong convention. Although the Hong Kong convention was put in place in 2009 after widespread recognition of the high levels of fatalities, injuries and work-related diseases in ship breaking yards, it has not yet been enforced. Ship recycling is seen as the safest and most environmentally friendly method of disposing of a ship at the end of its life cycle, however, the process will require extensive documentation and full details on the materials all the way up the supply chain as well as documentation highlighting the inventory of hazardous materials.

A seminar on superyacht glazing followed, with Alistair Clayton of Seaglaze underlining bonded glass lifespan and the certification issues caused by age. Demand for bonded glass has increased significantly in recent years with many naval architects using it to push the boundaries of conventional boat design.

Before the lunch break James Roy, Managing Director of Lateral Naval Architects gave a rousing speech on ‘the move towards zero’ where he revealed that, “An 85m superyacht with a typical Mediterranean/Caribbean cruising pattern produces 4250 tonnes of CO2 every year, and so, it would take 994 people to produce the same amount based on regular habits.” Roy believes that the ‘3 R’s’ – regulation, revenue, and responsibility are key to paving the way towards zero environmental impact. 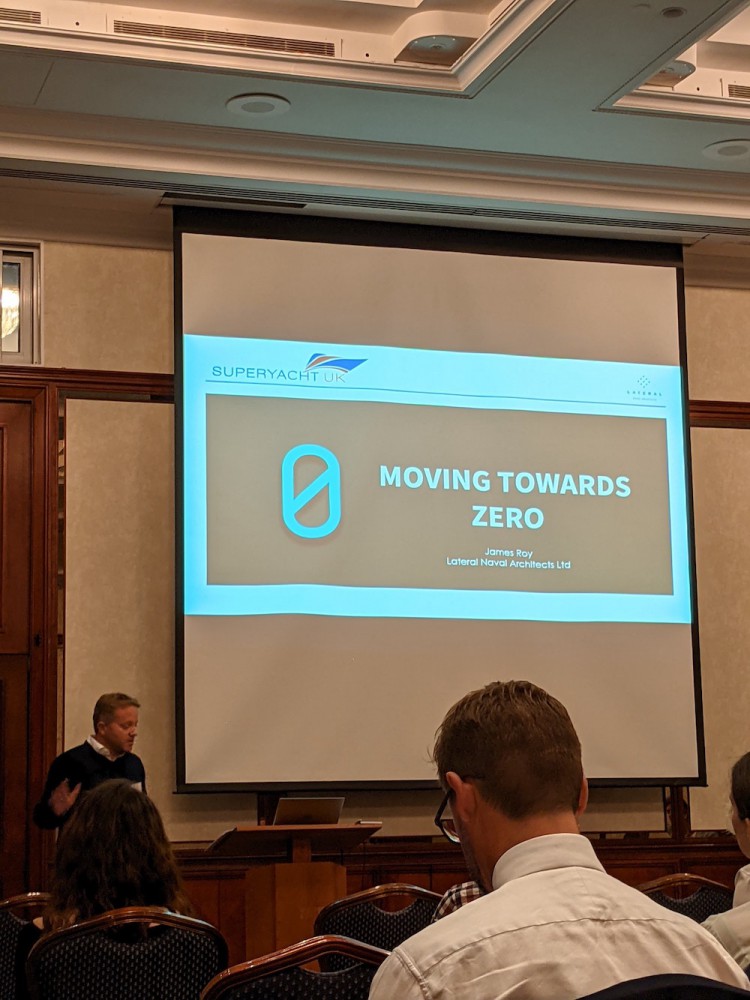 The urgency for action against the climate crisis was echoed by Rachel Goult of Yacht Carbon Offset Ltd who was keen to separate fact from fiction amid the many myths and perceptions surrounding carbon offsetting. During the presentation Goult provided insight on how carbon credits are getting spent as well as the specific locations that are benefitting from offsetting schemes. Among the global list was Mikoko Pamoja in Kenya which is one of the world’s first ‘blue carbon’ credit projects, comprising the protection of 117 ha (hectares) of mangrove forest and the reforestation of an entire beach and shoreline. 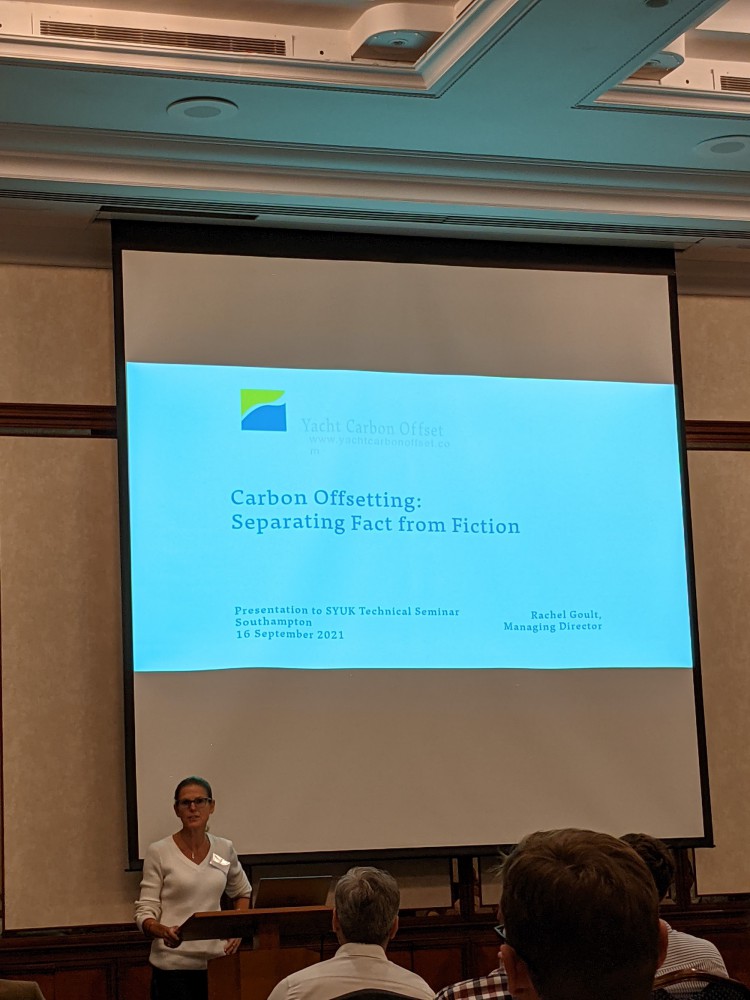 Angus Gray-Stephens of Cape Horn Engineering also gave a seminar on the role of Computational Fluid Dynamics (CFD) in large yacht design. Cape Horn Engineering have been utilising this technology for vessels in the America’s Cup and Volvo Ocean Race design campaigns for over 15 years, however, CFD has not yet become widespread in the superyacht industry despite its obvious advantages of increased mobility, speed and fuel efficiency. Gray-Stephens suggests that this is due to the, ‘If it isn’t broke don’t fix it’ attitude in the industry. “The industry is quite conservative in its nature and that can sometimes hinder the progress of new technology.” Gray-Stephens explained.

To finish off the event, the keynote speaker of the day, Rodi Basso, CEO and Co-founder of the E1 series, unveiled some of the plans for the world's first electric powerboat racing championship. In a bid to replace philosophical debate about the environment with real life action, the E1 series have unveiled the ‘racebird’ electric powerboat which is 7.5m in length and can reach speeds of up to 50 knots. The 200kg battery built by Kreisel will be capable of producing up to 37 kw/h. The company plans to begin the testing of the prototype in the beginning of March next year with the first championship race expected to take place in the Spring of 2023. Plans are also in place to create a week-long sustainability festival in conjunction with the championship with Basso stating that this will be “The beginning of democratising electric water mobility for everyone.” 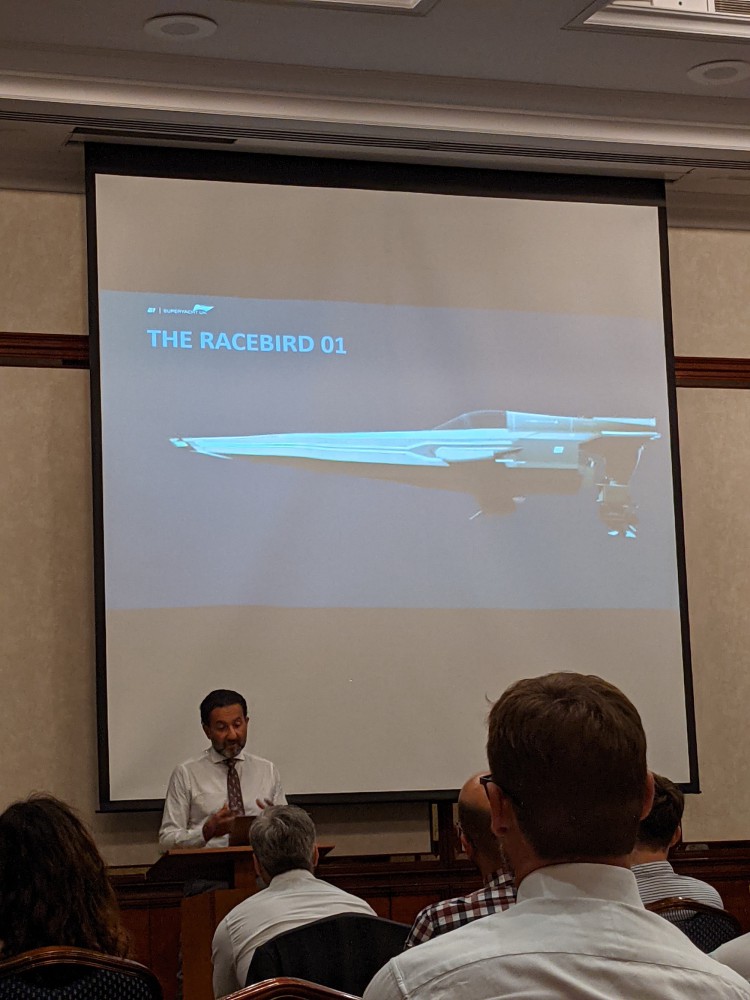 The event was one of the first since the beginning of the pandemic to include physical interaction and networking albeit with social distancing and precautionary measures in place. The Superyacht UK Technical Seminar also serves as further proof of the value and importance that these events have for the wider industry. With Monaco Yacht Show taking off next week as well as the recent news regarding the relaxation of COVID measures by the Dutch government, many will be hoping that this years show season will prove to be a success. For those still unsure of their ability to physically attend the most anticipated events of the year, you’ll be able to experience it through our newly introduced TSF live programme which will include candid boots-on-the-ground journalism coupled with an artistic cinematic flair.

One to One – Mike Blake