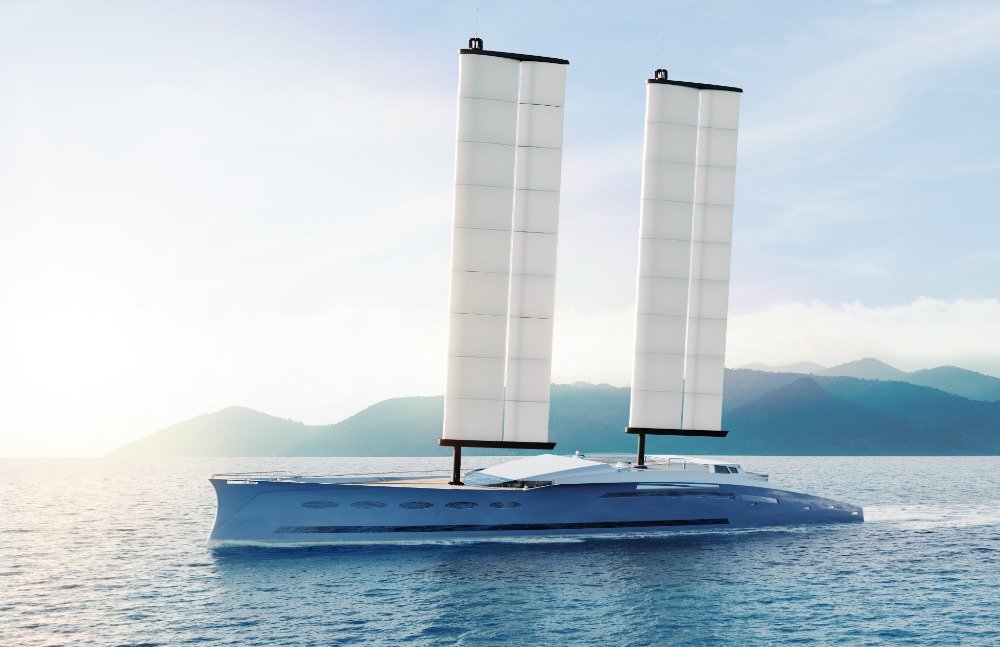 Merveille Yachting presented its M253w concept eco-cruiser, in partnership with Feadship and AYRO, at the Feadship breakfast during MYS 2021. It defied traditional classification at first glance and begged further interrogation. SuperyachtNews speaks with Nicolas Cantenot and Jerome Vollet, co-founders of Merveille Yachting, to understand where this design fits into the market and how exactly does it work?

"Firstly, It is vital to understand that we are basically talking about a motor yacht, the main engines are the masts, and the fuel is the wind. It is a fully automated system, no rigging, no lines, nothing on the deck, and it can be operated exactly like a motor yacht," begins Cantenot, who stresses this point from the beginning. Vollet also offers that this is something new:

“We have designed and sailed on many yachts, and it is impossible for us to say that this is a sailing yacht. This is an entirely new kind of vessel” says Vollet.

That kind of vessel, as we discuss, is a wing motor yacht. According to the manufacturer  AYRO, the wing itself is designed to operate with applicable apparent wind of 5 degrees to downwind and in apparent wind speeds of up to 80 knots. The wing itself can be collapsed and the masts aligned with minimal windage. 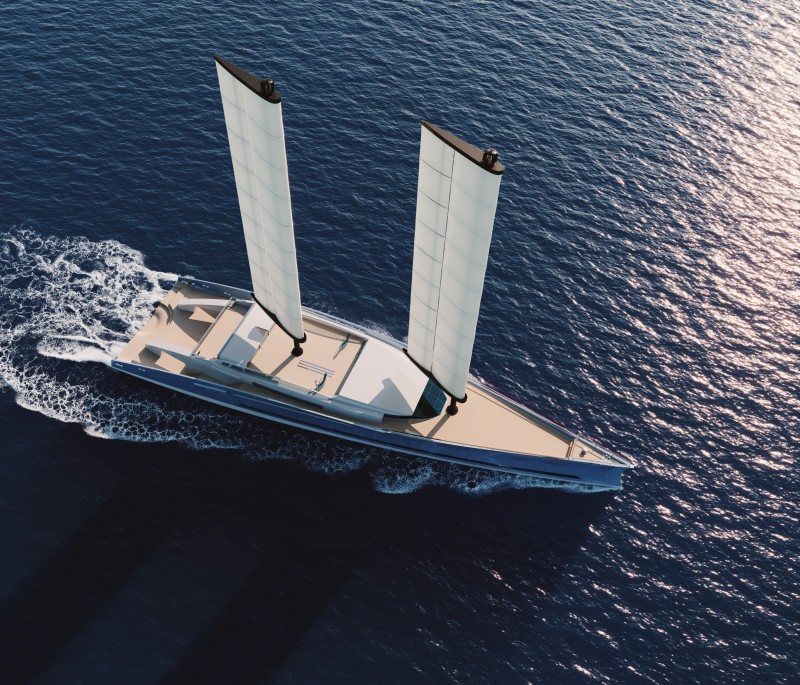 The wings will automatically adjust to the apparent wind angle.

Vollet and Cantenot have recently returned from test sailing with the wing system; as Vollet explains, "The first time we tested the wing system at sea, we were very surprised by how quiet it was. There was no sound of sails flapping, nothing from the lines, it was very strange at first. Even when making a manoeuvre, everything remains silent". By having the system fully automated, the operators can theoretically control the experience for the guests also, as Cantenot clarifies, "The heel angle will be minimal. The operator can choose how much they want; for example, there is a comfort mode where the angle will be at its least. There will be a small trade-off in speed, but you have the comfort and the choice; in the same way, you can control the setting on an electric car." 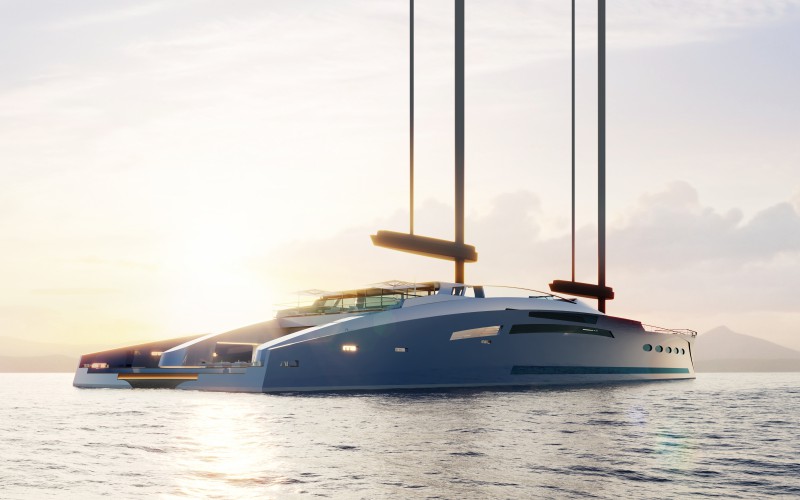 M253w with the wings down while stationary

"In testing, they (AYRO) kept the wing up in 50 knots, and they had no issues and kept full control" highlights Vollet, who goes on to outline the specifics of the wing vs traditional sail configuration: "For example, 1000 square meters of sail area on a traditional sailing rig can be bought down 500sqm of wing and still have the same resulting speed and power. An owner may choose to have more wing area and then, in turn, have a very fast yacht. This possibility is intriguing, and we are already working a process of designing something like this".

"The system itself is already operating on the Energy Observer scientific research vessel. And in 2023, there will be a commercial vessel in the water carrying rockets to French Guiana," explains Cantenot. The below video from AYRO explains the system in greater detail.

The freeing of the deck space in the concept drawings is clear, and for Cantenot this was the best way to then also give as much space back to the owner a possible. And that appears to be what they have achieved, in principle, with an owners guest cabin of 200sqm situated prominently where a traditional eclosed bridge would typically have been located. The enclosed bridge then moves back behind the owner's cabin relies on digital information readouts. 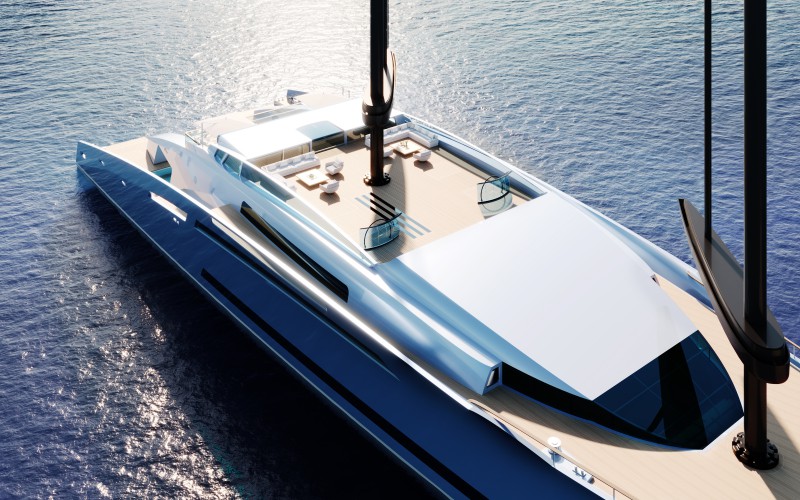 The owner's cabin will be housed in the area to the stern of the forward mast.

Cantenot is certain that this system offers many of the best features of both sail and motor yachts, stability and comfort being primary considerations. "Having the two wings allows the boat to be held in a stable position, which is much more comfortable", explains Vollet. The space that Vollet and Cantenot speak of is more apparent when viewed from astern, where the wide stern, which is also a stability consideration, affords a very large transom area and guest area. 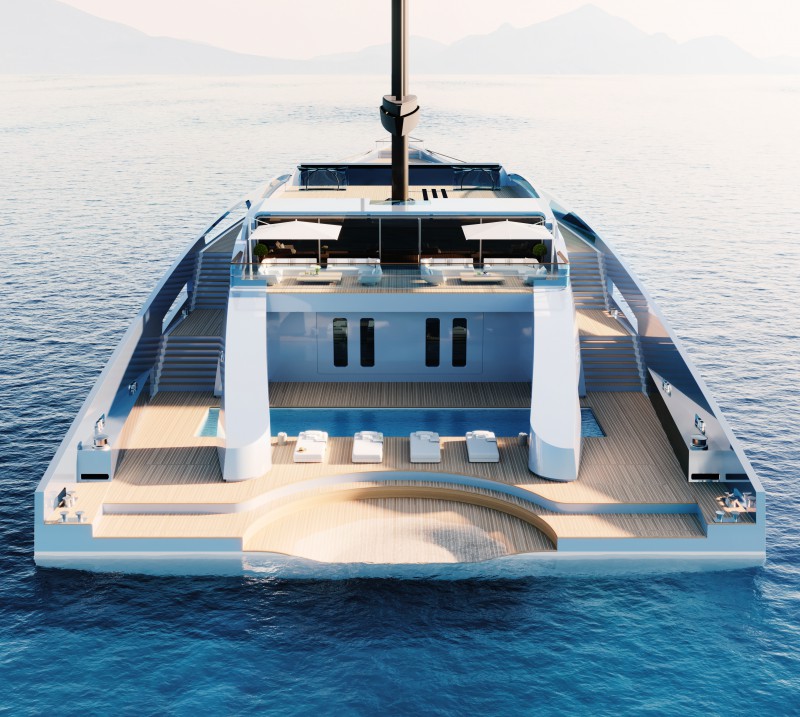 Along with the generators onboard, Merveille Yachting hopes that the M253x will be able to charge its own batteries via multiple methods, as Vollet explains. "There are also wind turbines with a 1.5m diameter at the top of each mast, and these will charge the battery banks while sailing and continue to generate if there is wind at anchor, there will also be an underwater turbine, and we hope to manage a lot of the hotel load via generation like this".

When speaking about whether there was still any technological advancements that were needed to make the project take off, Cantenot was clear that everything is already here, all that is needed is the right owner to make it happen.