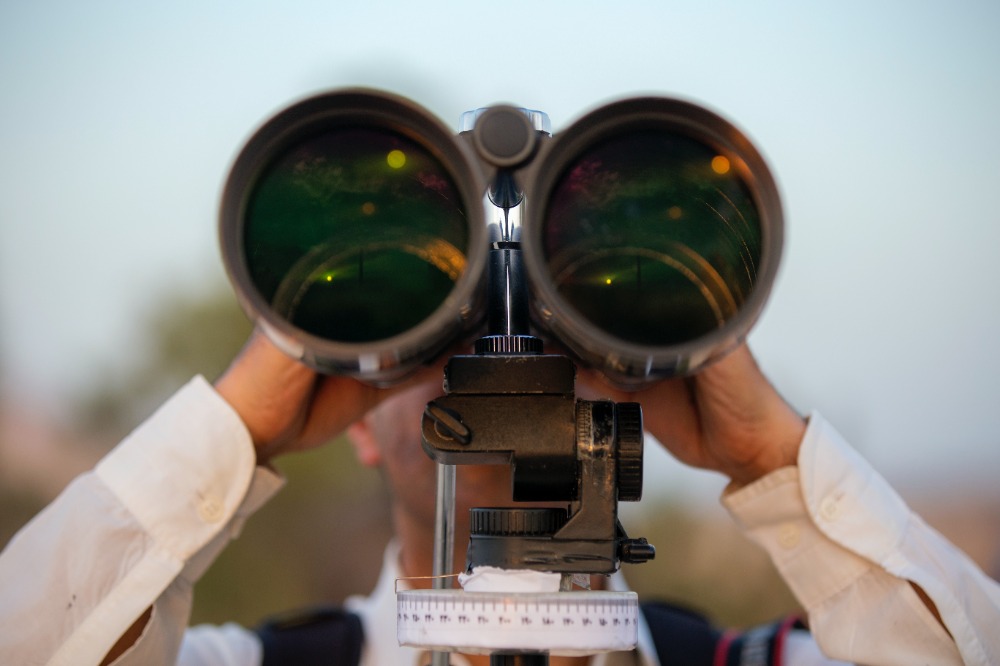 The superyacht industry is incredibly niche, as well as famously conservative and secretive. It’s not all that often the market is thrust into the limelight, but when it is, it's usually for all the wrong reasons. In fact, practically every time the mainstream media pick up something newsworthy from the industry it's because of its most unscrupulous individuals and undesirable features. What the mainstream media often overlooks, however, is the impact that this hunt might have on those who are working onboard the vessels.

To put the state of the market into context, last week the President of the United States sent out a tweet saying "We are going after superyachts” following on from a tweet from the White House which announced their intention to, “launch a multilateral Transatlantic task force to identify, hunt down, and freeze the assets of sanctioned Russian companies and oligarchs – their yachts, their mansions, and any other ill-gotten gains that we can find and freeze under the law.” For some Twitter users, this was the equivalent of a rallying cry and license to eat the rich. 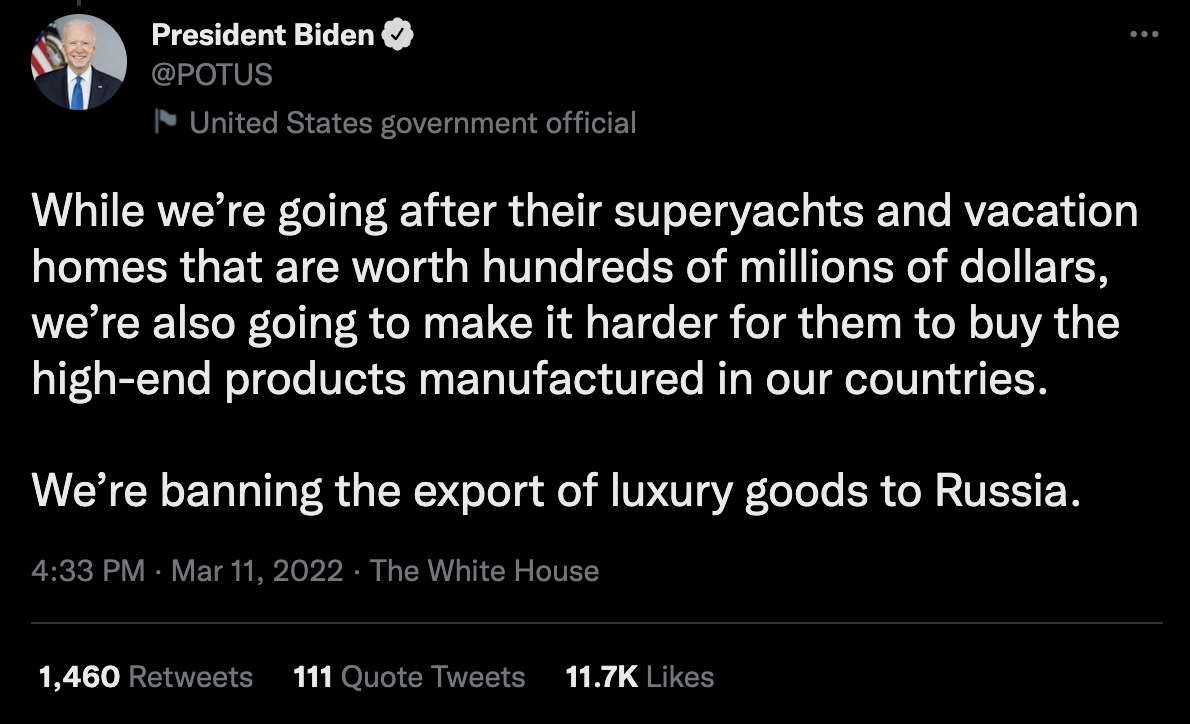 Alex Finley, a former CIA Officer and author, has been spearheading the hashtag #YachtWatch on Twitter. Over the past couple of weeks, Finley has been sharing screenshots from websites such as Marine traffic and VesselFinder to show the Twitter community where Russian owned superyachts are going. One Twitter user, A Harvard professor and a Pulitzer finalist posted, “It is ok, I tell myself in the midst of mostly horrible news, to get immeasurable joy by following this very unique front in the war.” Alongside a link to an article exposing Putin's ownership of a superyacht.

While Jack Dorsey, the former CEO of Twitter has been known to enjoy the odd charter in St Barths, it is safe to say that the wider Twitter community is not particularly friendly with the superyacht industry. One can understand why this may be, the level of reportage and attention that the war in Ukraine has garnered has been unprecedented, and the horrors of Russia's war crimes are plain for all to see. So, for many, watching and even taking part in anything that can hurt those associated with the Kremlin, is their way of seeking justice. 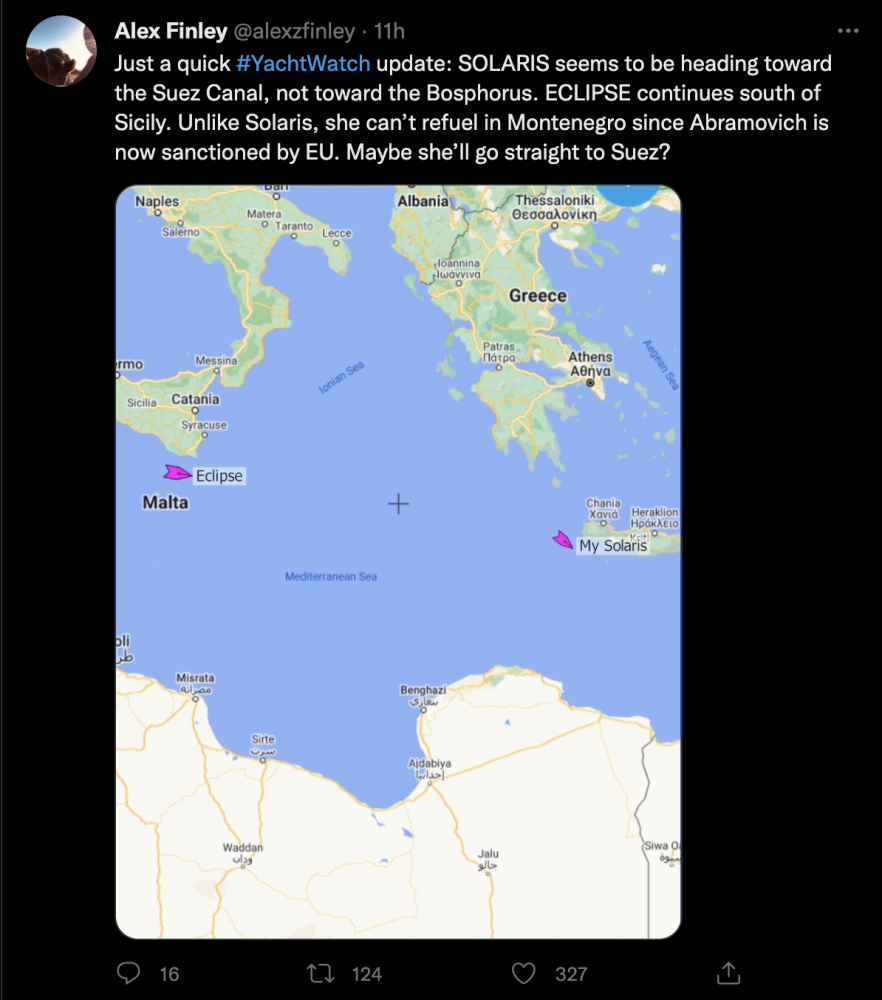 Amidst the social media bashing of the superyachts and their ultimate beneficial owners, there has been little in the way of sympathy for the blue-collar workers who have been impacted by the recent sanctions. Hundreds and possibly thousands of employees have lost work or been made redundant because of the sanctions as superyachts are frozen and projects around Europe are reduced to having skeleton crew.

In Narvik, Norway, an English captain and former marine, along with his team of 16 Western crew, was subjected to hostility and abuse from angry locals who mistook them for KGB officers. The crew were unaware of political tension while cruising in the North Sea and after mooring up in Norway the Port Authority were quick to ensure the seafarers had extra security and surveillance after a crowd had formed around the Explorer vessel.

That the general public has taken such an interest in superyachts is justified in so far as in some small way it is helping to hold sanctioned individuals and those close to them to account. However, those on social media choosing to take part in this would do well to remember where their ire is really directed. Superyachts, at the end of the day, whilst symbols of extreme wealth, are only objects and thus have no moral position. It should not be the vessels and it certainly should not be the people that work onboard the vessels that are the subjects of public disdain, that privilege should be reserved for those that own the vessels.