With an estimated net worth of up to $130bn, Bezos’ $10bn pledge is almost 8% of his entire fortune… 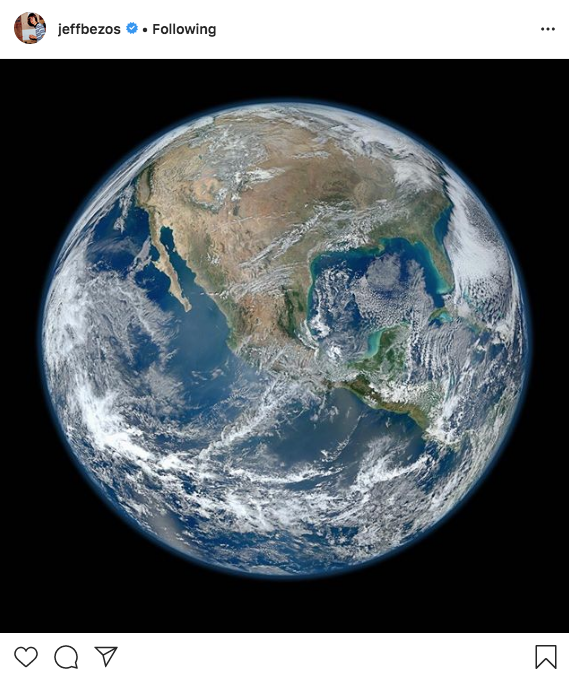 Last night, via the powerful online platform that is Instagram, Jeff Bezos declared to his 1.5million followers that he is launching the Bezos Earth Fund, further to recognising that “climate change is the biggest threat to our planet”, as stated on his post.

“I want to work alongside others both to amplify known ways and to explore new ways of fighting the devastating impact of climate change on this planet we all share” - Jeff Bezos, CEO - Amazon

“I want to work alongside others both to amplify known ways and to explore new ways of fighting the devastating impact of climate change on this planet we all share,” Bezos’ post caption continued, receiving 292,855 likes in 16 hours.

The global initiative, launched during an era of environmental unrest, has been set up by Bezos to fund scientists, activists and non-profit organisations. “We can save Earth. It’s going to take collective action from big companies, small companies, nation states, global organizations, and individuals,” Bezos continued. “I’m committing $10 billion to start and will begin issuing grants this summer. Earth is the one thing we all have in common — let’s protect it, together. – Jeff” he concluded.

Time magazine recently reported that “global temperatures this January were the warmest on record for the month of January,” so Bezos’ announcement is timely, if (hopefully) not too late. While over 200,000 Instagram users have liked the post, understandably, comments indicate a mixed reception, varying from “Amazing guy”, and, “We are ready to help”, to, “Hypocrite!!!!!!!!”, “and “I hope you also consider your own carbon footprint as a company. Use biodegradable packaging, and appropriately sized boxes. Think about a change in delivery policies and how much that could be affecting the environment”, referring to the multinational technology company, Amazon, which he founded, and is CEO and president of.

However, with an estimated net worth of up to $130bn, Bezos’ $10bn pledge is almost 8% of his entire fortune, and is a welcome catalyst to inspire more UHNWIs to consider investing their money into tackling the climate crisis. While we can comment on the actions of his company up to this point, the success of one virtual Amazon may mean that these funds can contribute to the research and ways in which another, very real, Amazon can be saved and preserved.

Last year, for our Pacific-centric edition of The Superyacht Report, I had the pleasure of speaking to colleagues of the late Paul G. Allen, co-founder of Microsoft, founder of Vulcan Inc, and a superyacht owner with an unparalleled approach to each vessel and their potential usage beyond cruising.

Allen’s philanthropic programme was hugely widespread, from the Great Elephant Census, to the Allen Coral Atlas, the Allen Institute for Artificial Intelligence, the Allen Institute for Cell Science, the Paul G. Allen Frontiers Group and numerous initiatives such as FishBase, Global FinPrint and the Paul G. Allen Foundation. Allen combined a passion for the sea and explorations on board his superyachts with a genuine desire to help fund research that either did not exist before, or did not have adequate support.

If I had a ‘net worth’, I can confirm that 8% of it would be closer to £10 than $10bn, and while my £10 is still a worthy contribution to the many charities working towards the saving of planet Earth, I am grateful that individuals such as Bezos, currently the world’s richest man, are able to contribute to its future and its protection on a much more impactful scale; we should not get hung up on what percentage of his billions he has pledged.

As is the case with any crisis, time is of the essence, and funds on this scale will help to speed up the processes and research underway to provide us with solutions...

As is the case with any crisis, time is of the essence, and funds on this scale will help to speed up the processes and research underway to provide us with solutions. For example, thanks to the late Paul G. Allen and the research taking place at The Allen Institute for Brain Science, the institution has been able to predict that the human brain might be fully mapped out within four years – something that was previously thought to be unachievable. Until I can contribute $10bn to the climate crisis, I think I’ll refrain from calling Bezos a hypocrite, but rather spread awareness of the newly launched Bezos Earth Fund which may one day achieve the unachievable.

Within the superyacht industry can be found some of the world’s wealthiest and influential individuals, and we must remain conscious of championing the good works of many owners, such as Allen. If we want to ensure yachting is seen as a viable investment for the next generation of UHNWI’s, we need to make more of a noise about the good that can be achieved, the ways in which owners can give back to the planet, and aid research both above and below sea level.

From Nevada to Davos – Hot topics from CES and WEF

The Superyacht Sustainability Report out now

A major shift worldwide, an urgency to act