SuperyachtNews.com - Owner - Are two boats better value than one?

Are two boats better value than one? 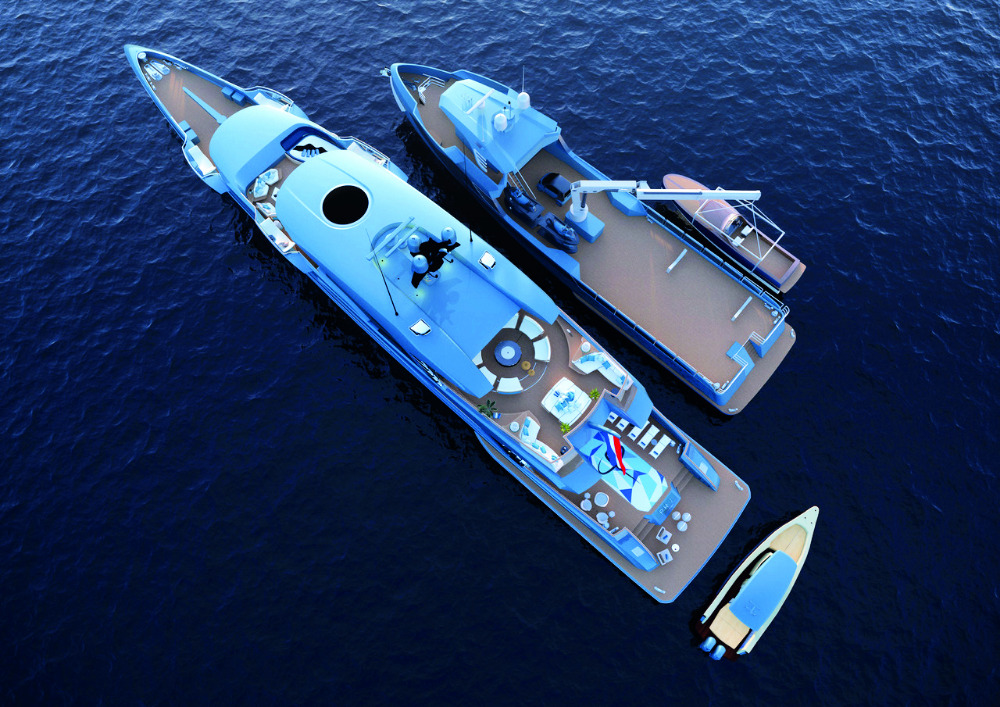 SuperyachtNews examines the cost savings associated with building and running a support vessel as opposed to commissioning an exponentially larger superyacht.

The support-vessel concept is a simple one. Its main purpose is to enhance the superyacht experience, and a purpose-built support vessel is able to carry surplus equipment, tenders and toys, freeing up spaces on board the mothership for owner and guest usage while also reducing the time they have to wait on arrival or departure from an anchorage, leaving the mothership and its crew fully dedicated to service.

As well as these well-documented design and operational advantages, owning two smaller vessels, consisting of a mothership and a support vessel, as opposed to one significantly larger yacht that can carry the same amount of equipment, can also have benefits in terms of cost.

ShadowCAT is observing a shift in the market when it comes to the perception surrounding the cost of owning a support vessel. “In the past, owners have reasoned that two vessels must be more expensive to operate than one larger one, but they are starting to see that this is a false economy,” explains Robert Smith, director at YCTS and co-founder of ShadowCAT. “Today, brokers and management companies are doing a great job introducing the benefits of this fleet approach, and owners are seeing more successful examples at sea and want that for themselves. There is almost no yacht owner who doesn’t suit a shadow vessel.”

Project Phi, scheduled to be delivered later this year, is a prime example of how the support-vessel concept can optimise the superyacht experience as well as add value for the owner. The 58.5m mothership Phi, in build at Royal Huisman, will be operated in conjunction with its 36m support vessel Phi Phantom, in build at Alia Yachts, both of which will share aesthetic DNA. Phi Phantom has been built to carry a 12m and 14m tender, an 8m sailing boat, six jet skis, a car and 60,000 litres of surplus fuel for the mothership, as well as bicycles, motorbikes, spare parts and a vast amount of storage and refrigeration. Owners’ representative Guy Booth estimates that Phi would need to be a 90m project in order to deliver the same functions on board one yacht.

“When you consider it would be potentially a 25 per cent higher build cost
to have all of that utility on Phi rather than on a support vessel, there’s no way that
our support ship has cost us 25 per cent of the value of  Phi, not even close.”

Value, as opposed to cost, was a key factor for Booth in the initial discussions surrounding the concept of Project Phi. “If you are cost-conscious, you don’t build a custom yacht at Royal Huisman. Value was a factor but it is inseparable from all the other factors surrounding operational simplicity and guest experience,” he says.

“First of all, building the mothership below 500gt was very important because compliance levels and build costs are much lower when you don’t have to meet all the standards that come into play at 500gt. And this extends to annual operational costs, which are also much lower below 500gt.”

As such, Phi has been built to be 499gt, which offers significantly more value than a 500gt-plus yacht. “The educated figure that I’ve heard is a 25 to 30 per cent increase in build costs for 500gt compliance compared to sub-500gt compliance, and double the length is at least double the build cost in terms of labour and materials,” adds Booth.

“When you consider it would be potentially a 25 per cent higher build cost to have all of that utility on Phi rather than on a support vessel, there’s no way that our support ship has cost us 25 per cent of the value of Phi, not even close. So we essentially have the utility of a 90m yacht at a significantly lower build cost than building a 90m yacht.”

The same thinking was applied to Phi Phantom, which has been built to 199gt as a similar cost leap occurs at 200gt due to the higher compliance levels. The eventual decision to build the support vessel at Alia Yachts also came down to value, as well as the owner’s particular vision for the boat.

“Phi Phantom is a workboat and, as such, we wanted it unfaired and painted in matt paint,” explains Booth. “It would be an extra €150,000 to fair and paint Phantom with a hard gloss yacht finish. But is that value? Probably not because it doesn’t need to be shiny and the owner wanted to build a tank. But all of the machinery and equipment on board, the stabilisers, the propulsion, the navigation, is exactly the same on Phantom as it is on Phi, which is uncompromising and the highest standard we can buy.

“We went to Turkey to get value because the labour rates and overheads are particularly low and there are VAT advantages associated with building outside of the EU. But, in addition to that, the metalwork they do at Alia is superb and that was an important factor because we knew we weren’t going to fair the paint.”

Another element of the support-vessel concept linked to value is the ability to optimise valuable real estate on board the mothership for guest usage. No matter how large a superyacht is, there’s always an element of compromise ingrained in its build due to the number of tenders, toys and technical spaces that have to be incorporated, and being able to avoid compromise is something that has been taken real advantage of on Phi.

“The outside spaces are enormous because we don’t have hull doors,
hull openings, overhead cranes and all of these complicated systems that
you need just to carry your tenders and toys.”

“Of course, we have technical spaces on board for our own machinery on the mothership, but we don’t have a big lazarette or garage spaces. Our lazarette on Phi has a couple of frisbees and some snorkelling gear, it’s tiny,” says Booth. “By putting all of these tenders and toys, as well as half a container’s worth of long-range tools and spares that you might only use once a year but need to carry, on the support vessel you get a lot of space given back to the guests.”

As a result, Phi’s biggest ‘wow factor’ is its exterior spaces. “The outside spaces are enormous because we don’t have hull doors, hull openings, overhead cranes and all of these complicated systems that you need just to carry your tenders and toys,” adds Booth.  “We have a small rescue tender on Phi and a small crane to launch it, but if we didn’t have a support vessel we would either have had to put the main tender on the bow, which would create a big eyesore on the bow, or have a big crane somewhere at the stern to pick the tender up and put it on top of the swimming pool.

“Somewhere, somehow, we would have had to put one or two tenders on Phi, which would completely change the boat and sacrifice 15 to 20 per cent of the space that is now for guest usage, not to mention the compromise there would be on tender size. These are the same compromises that yacht designers and builders have been struggling with for decades and if we didn’t have a support vessel, this is the vice we would have been pressed into.”

Smith agrees that the key to the support-vessel concept is allowing clients to be uncompromising in their approach to building a yacht. “Existing owners know better than anyone the inconvenience of clearing the decks of your guests so a helicopter can land, or not being able to upgrade a tender because you have run out of space,” he says. “If accommodation is starting to feel cramped as an owner’s lifestyle changes, co-opting storage from the technical or deck departments is unlikely to happen.

“Overall, it’s a series of compromises for clients that they should not have to sacrifice after making such a large investment. If the premise is that the client just needs more space, there is no limitation on price or creativity where constructing superyachts are concerned, they can be built as big as a client desires … up to a point. But as these vessels get larger in scale at ‘big white boat’ prices, there could still be real sacrifices when the vessel is at sea. Imagine clearing your guests off the exterior decks and securing the pool area so that the helicopter can land. And consider how much potential space devoted to guest comfort would be sacrificed to accommodate the larger crew required for a larger volume of vessel.”

Most owners will habitually think of sizing up when they decide they want more space, either due to an element of ego or simply because that is the traditional direction in which they are pushed by advisors within the industry. However, this mindset is changing the more clients realise how much the onboard experience can be optimised with a support vessel, with projects such as Phi and Phi Phantom paving the way.

Booth acknowledges this shift. “We started this process five years ago and, during the course of the project, we haven’t yet seen another support vessel being built with shared design characteristics with the mothership, but we have seen many more medium-sized yachts, from 35-60m, coming out with support vessels. So I think the demand for support vessels is quite high right now, and more boats are looking at the concept.

“I’ve certainly had several discussions with a dozen colleagues of mine over the last two years who are driving 45-55m yachts, and the owners are saying that they either need a bigger yacht or a support vessel because they want more space and storage. We might be one of the first to do it but we’re certainly not the only ones thinking about it.”

For existing owners, this could even mean reconfiguring their current yachts and building an additional support vessel, which would mean further cost savings as opposed to building a single bigger yacht. “For example, most 50m yachts traditionally have a tender garage and a stern door that might be 60sqm or more, so you could get rid of the tender garage and turn it into a beach club,” says Booth. “If an owner likes their yacht, they might not want to sell it for €20 million and then invest €40 million to buy an 80m. That’s a completely different consideration as they are now running a ship with all the additional logistics and expenses that come with it.”

As Booth concludes, it’s no longer about chasing the bigger and the better. “The landscape has changed, and what was sensible and the best way to operate 20 years ago is probably not the same now. I hope Phi inspires other builders to start investigating and offering packages and options like this, and owners to look at a different way of yachting in the form of a low-cost, high-value and high-utility support vessel.”