In the latest instalment of fictional character Donald McLaren’s life in yachting, we meet him as a newly established ultra-high-networth individual, where he encounters the brokerage market for the first time and toys with the idea of commissioning his first new build.… 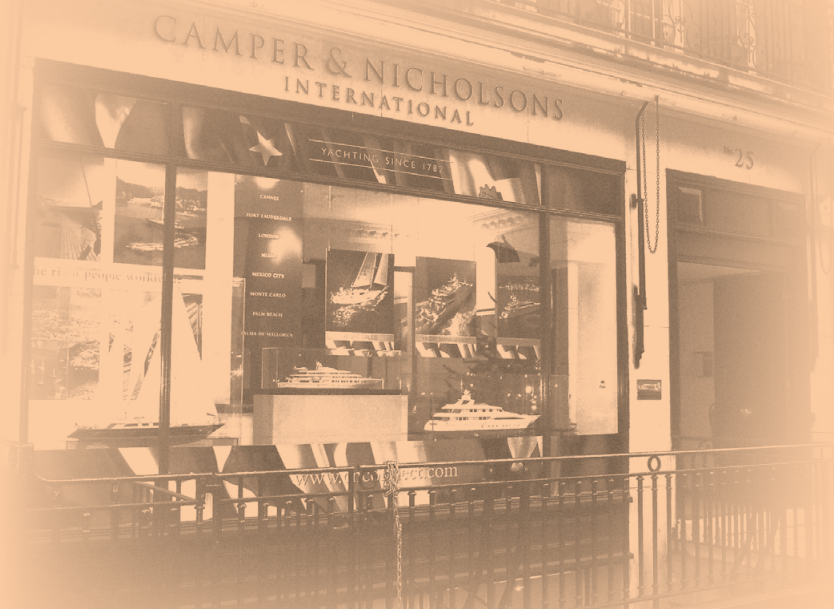 The wintry showers promised on the BBC TV weather forecast on Sunday began to make an appearance through the gloom of this early Monday afternoon. It was 3 December, 1996. Donald McLaren stood outside the offices of his lawyers, a behemoth of a firm in a modern glass and marble edifice that oozed money. He was beginning to process the fact that he was now worth almost £200 million. Why on earth anyone would want to pay that much money for his clumsy, error-ridden holiday booking website was beyond him, but they did and they have. He saw a black cab come swinging around the corner from London Wall. He yelled, “Taxi!”, and the gleaming wet black cab pulled up.

He yanked open the door and jumped in. “To Bruton Street, Mayfair.” The taxi swung on to Bruton Street and parked opposite Camper & Nicholsons International. Donald paid his fare, plus a little on top.

He stood opposite Camper & Nicholsons and looked at the small shop front with its mahogany picture window and large white model of a large white yacht. To Donald, this was just the same as every other large white yacht he had ever seen. His mind was full of memories of his late father and the toy yacht he had bought him for the boating lake in Greenwich. Smiling an impossibly wide smile, and holding in both arms his toy motor cruiser, he stopped briefly in front of the door to Camper & Nicholsons, then entered.

Standing before him, six foot two or three, perhaps, and dressed in a beautiful Savile Row grey chalk-striped, doublebreasted suit, which he buttoned with two of the three buttons, was Donald’s brokerage contact, Nigel Broomfield.

He smiled in Donald’s direction and extended a signet-ringed right hand in greeting. Donald was outside his comfort zone; the sights, smells and sounds were all new to him. This was the embodiment, he realised, of Peter York’s seminal 1982 social bible The Official Sloane Ranger Handbook. There were young women in tartan skirts, crew-necked sweaters with upturned collars and fellows who seemingly never strayed too far from a pinstripe. The girls wore loafers. The boys Church’s, Brogues or Oxfords, all uniformly black.

Nigel was impossibly polite and very well spoken. Not a hint of estuary English. Donald would later count Nigel as one of his dearest and closest friends. Eton and Cambridge educated, he spoke fluent French and Russian. His spoken English was marvellous, with its air of nostalgia. A

t first, Donald was intensely intimidated by Nigel. Yes, Donald was university educated, but he had been to Kent not Cambridge. Donald was nouveau riche, and perhaps Imelda Marcos, the former first lady of the Philippines, had been right: it is better to be nouveau than no riche at all. But as he said that in his head, he really didn’t believe it. Yes, he was ridiculously wealthy now but he was already, a few hours into his wealth, feeling uncomfortable with his new-found status.

“Congratulations, old boy.” Nigel was cheery in his greeting to Donald. “When did you close?” “This morning,” Donald said apologetically. Nigel noticed that Donald’s bravado, his swagger, was missing somewhat and tried to reassure him. “You’ve worked hard, you’ve made your pot, time for you to enjoy it.”

The receptionist opened the double doors to the boardroom at the back of the offices and ushered in Donald. The 12-seater mahogany dining table that passed for a conference table kept the old-money theme running. Donald sat himself in the middle of the dining table, facing the double doors, and immediately adopted the stance of holding court. To his left, floor to ceiling, was a beautiful black-and-white photograph, probably taken at the turn of the 20th century, of a twin-masted schooner at anchor in the Arctic, the masts naked in the backdrop with huge banks of ice that made her black hull stand out in sharp relief. Nigel sat down and looked at the potential client in front of him, whose pockets were full and whose eyes were dreaming.

He allowed Donald to speak and show him the faded black-and-white photograph as he recounted the story of the boating lake in Greenwich Park, his father and the summer of 1966. “I’ve always dreamt about this boat. I know it’s a toy but I want to make it a reality. I don’t know how big it should be; 60, 70 foot, I don’t know. I may sail her in the Caribbean, but I’ve never been to the Caribbean. Not even sure that I would like the Caribbean. Too hot. I certainly don’t like the South of France. I don’t like that super-rich yachty clique and I know they only want to talk to me now because I have money. They never seemed to want to talk to me before I had money … but I do like my boat.” Nigel knew he had a job on his hands; he wasn’t just selling him the yacht or guiding him towards having a yacht designed and built to fulfil Donald’s dream.

Nigel had to find a way to ease Donald into this new social world for which he had bought a ticket without knowing whether he wanted to go to see the show. Donald was scared. Not of the ocean or the yachts but of everything that went with it. Was this yacht, that had been his dream since he was a child, going to symbolise a life he wasn’t ready for? The social circle he was uncertain of. He was ill prepared.

In the weeks leading up to the sale of his business, he had joked about the Porsches and the Rolexes and the chalets in St Moritz he would buy, but he never for one moment thought it was going to happen. It was a great fantasy game, but now the game was real. He was rich and for a man who was demonstratively social, he suddenly felt desperately alone. He withdrew within himself and Nigel noted the change.

“You’re not ready, are you?” he said. “No,” replied Donald. “OK, OK. You don’t have to decide anything now; you don’t need to buy or build a yacht. No one needs a yacht. You have got to be ready for it. I’ll tell you what we’ll do, let’s pick a week in the summer and charter a boat, something manageable, something you feel comfortable with. Let’s make it a holiday. Let’s test the water.”