SuperyachtNews.com - Opinion - Cloudy with a chance of recession

Apart from a couple of Wall Street Bulls, it appears that the majority of economists and banking experts have predicted a recession come 2023. The most widely accepted definition of a recession is to have two consecutive quarters with a decreasing GDP, of course, this means that it's almost impossible to predict with any certainty, but that's not to say that the warning signs aren’t there. The Federal Reserve could yet save the economy, but rising interest rates and rising inflation on the back of the COVID-19 pandemic and the Russian war with Ukraine make it seem somewhat unlikely. This could of course spell danger for industries, like yachting, that depend heavily on the American market.

Soaring profits during the COVID-19 pandemic helped to soften the blow of sanctions against Russian superyacht clients. And while the sanctions did present an enormous variety of human and economic challenges, little can compare to the bashing it received from the mainstream media. In some cases, it was well deserved, the industry as a whole did little to vocalise support for Ukraine and stand against Russian aggression in fear that it would bite the hand that feeds it. But now, with Russian oligarchs firmly out of the picture, the industry is keen to rebuild its battered image and showcase its scale, depth, and resilience in the face of adversity. In a bid to dissociate themselves from ‘dodgy’ clients, shipbuilders are leaning on the ever-reliable American client base to fill the oligarch-sized hole left in the market. 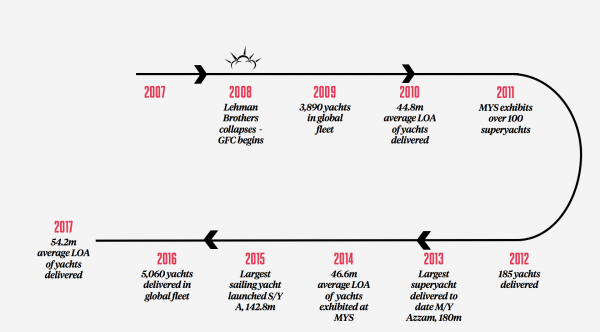 Placing all your eggs in one basket is a dangerous move for any business, but with such a small client base, the superyacht industry has little option other than to follow the money. The US accounts for nearly 30 per cent of the billionaires in the world, and it's estimated that well over half the 30m - plus fleet is owned by Americans. It is unlikely that the impending recession will be as devastating as the one in 2008. Even that devastating financial crash 14 years ago didn’t completely cripple the new-build market, the industry went from 267 deliveries in 2008 to 144 deliveries in 2015. Although the numbers may look bad, it did plunge the industry into a state of realism, consolidation and professionalism. It also rid the industry of opportunistic and financially unstable initiatives.

Economists advise that looking back at the history of past recessions won’t help to predict the next one. This one will be invariably unique due to the COVID-19 downturn and the other complexities facing the labour market and inflation rates. With that being said, one thing that experts do say is that based on the current state of the economy, and the cushion of stimulus payments over the last few years, the recession will likely be long and sluggish with a long road to recovery.

You don’t need to be an expert to know that these economic milestones often affect the poor far more than the rich, and so stakeholders may be quick to jump to the conclusion that a recession won’t affect their order books or their ability to attract new clients. However, what can sometimes be forgotten, is the role that public opinion and social envy can have on UHNWI buying habits. We have already seen the degree of schadenfreude on the sea when superyachts started getting frozen amid the Western sanctions. If unemployment increases and GDP continues to fall, then the animosity between the general public and the financial elite is only going to grow, and that is certainly no good thing for one of the opulent industries in the world.

The sanctions against Russian oligarchs hurt the industry, especially in Northern Europe, but the majority of business in the market gets done between American owners and Italian builders - without this relationship the industry suddenly starts to look quite anaemic. A slow economic chokehold that makes potential clients reconsider the need for something as unnecessary as a superyacht could, in the long term, be more damaging than the sudden exodus of Russian UHNWIs. The saying ‘When America sneezes the rest of the world catches a cold’ might not hold the same weight that it did in the 1920s, but it certainly still applies to the relatively nascent superyacht industry. Given how delicate the market is to external influences, the industry would do well to take heed of any sniffles coming from across the Atlantic.