As America experiences a growth in the number of millionaires, we explore the decline in new build superyachts……

According to the Capgemini World Wealth Report, North America has surpassed the Asia-Pacific to become the world leader in both high net worth individual population and wealth. The continent accounted for 55% of the roughly 1.2 million new high-net-worth individuals minted in 2020.

However, that same year, only two American superyacht shipyards were deemed ‘active’ (making at least one delivery in that year) with just four superyachts over 30 metres in length being launched in the whole country.

Although, there are signs that all is not doom and gloom in the new-build sector of America. Westport Yachts, located in the Pacific Northwest, accounted for three of the four superyachts built in America last year. And in 2019 Delta delivered the country’s most recent recognised full-custom project M/Y MLR. However, as evidenced by the graph below, these numbers are a far cry from 2008, which saw 34 superyachts built by 11 shipyards. 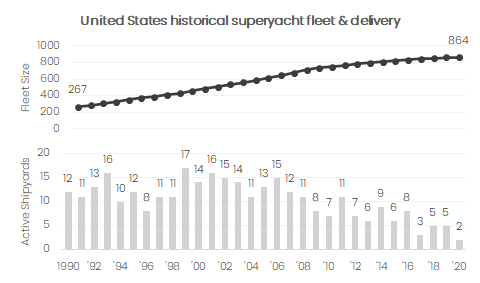 And so, it begs the question as to why wealthy Americans have decided to stop building their superyachts domestically. By looking through the years, we can identify a number of factors that have contributed to this downfall. Shipyard bankruptcies, the growing stature of European shipyard reputations, a global recession, ever-stronger purchasing power abroad for the US dollar, and a lack of investment in the next generation of workers have all helped contribute to the reduction of superyachts being built in the US.

Although, with that being said, there are growing signs of owners looking to complete refits in the US. One particular market, which is often associated with the US, is the sportfisher market, which has seen an increasing amount of yacht builders adapt to accommodate the superyacht lifestyle. These are the kind of developments which could bridge the gap between a booming market of smaller yachts with a declining number of superyachts.

Jim Eden, former president of Northship Inc, has long espoused the importance of the planning process for superyacht builds, and in a conversation with SuperyachtNews he explained how it has affected some American shipyards, “What the shipyards in the US need is an investor with a vision for the next five years. If you look at some of the shipyards in Europe who build some of the most fantastic superyachts, you know that they have detailed plans that stretch far into the future. I am hopeful that will happen in America too.” Eden also added that, “Change orders during the planning process are highly damaging to the ship building process and even the smallest considerations can change the whole dynamic of the yacht.” 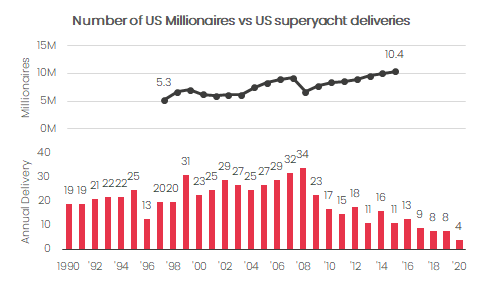 A more obvious and significant factor, as seen in the graph, is the 2008 recession. The period from 2004 until 2008 saw a steady increase in the amount of annual deliveries, from 25 per year to 34 per year. During the same time period, an additional 1.7 million Americans were able to label themselves as millionaires.

As Eden says, “Anything over 160 feet is recession-proof”. Therefore, a US market primarily dominated by production-built superyachts working at the smaller production end of the market was bound from the start to feel the brunt of the recession. Whereas the more diverse and scalable European market proved to be able to better weather the storm.

Although 2008 is seen as the beginning of the downfall for custom built superyachts in America, the most significant decline has been in recent years, specifically, 2016 onwards. This is in part due to the closures of both Christensen Shipyard and Palmer Johnson in 2015, and Trinity Yachts in 2016.

Trinity Yachts delivered 52 hulls in its lifetime, however, new superyacht construction ceased in 2016 after being purchased by Harvey Gulf. Both Christensen and Palmer Johnson were also major contributors to the American new-build market, having delivered 91 superyachts between the years 2000 and 2014. Christensen has since returned to the fray under a new guise, but the loss of two global powerhouses in the last decade has left its mark on the size and scope of the market; America delivered more superyachts in 1995, when there were half the amount of domestic millionaires, than in the last three years combined.

The 90s was also a decade which saw the demise of Broward Marine, once the most prolific supertyacht builders on earth and a company which fell from the heights of having the largest order book in the world and delivering an average of eight boats every year.

With the difference in value between the euro and the US dollar having substantially narrowed throughout the past two decades, wealthy Americans have had even more reason to purchase high-value goods in Europe. Furthermore, the euro vs dollar dynamic has only been accentuated when coupled with political unrest in recent years.

The tit for tat trade war between the Trump administration and the EU, as well as the enormous tariffs placed on steel and aluminium, also proved detrimental to the US new-build sector. Tariffs that became effective in 2018 were put in place for the sole purpose of protecting domestic industries, which proved successful, with an increase of roughly 1,000 jobs in steel production.

However, as domestic steel and aluminium prices increased, there was a negative knock-on effect of manufacturing industries which depend on these metals to create products. According to a recent study by researchers from Columbia University, the Federal Reserve Bank of New York, and Princeton University, it was estimated that roughly half of the Administration’s 25 per cent tariff on steel was passed on U.S. domestic steel prices.

Inevitably, this made circumstances increasingly more difficult for U.S. producers to compete against foreign competitors. As reported by PBS, Section 232 tariffs on steel and aluminium had likely resulted in 75,000 fewer manufacturing jobs in firms where steel or aluminium are part of the supply chain.

Reinvesting in the next generation of superyacht workers is also seen as a viable solution to help reinvigorate the American new-build market, “When you look at some of the naval architecture programmes in the UK, Holland and Germany you can see why they are the best in the world,” Eden went on to say. “You look at some of the work they do during their apprenticeship and it’s amazing. The level of detail and the knowledge that they gain over those years is second to none; it’s enough to make you wonder whether some of these naval architects who are fresh out of an apprenticeship could just go on a build the whole thing themselves.”

With the Mediterranean being the most popular location for cruising and private charter, companies in the European new-build market do have some obvious geographical advantages. Especially when considering just under half of the global superyacht fleet operates in the Mediterranean. However, the longstanding and unwavering reputation of English, Dutch and Italian shipyards has also historically attracted a number of America’s ultra-high net worth individuals, most recently including such high profile individuals as Jeff Bezos, who is currently building a superyacht with Oceanco. As Warren Buffet once said "When a management with a reputation for brilliance tackles a business with a reputation for bad economics, it is the reputation of the business that remains intact.”

With that being said, refit and repair businesses in the southern states of the U.S seem to be capitalising on the influx of superyachts migrating to North America, we have seen this with recent news of Derecktor anticipating the expansion of its new Fort Pierce site this summer. This also follows the developments on the East coast, with Savannah Yacht Center having recently opened facilities to cater for yachts over 60m. After analysing the decline of new builds in the US, it is clear to see that there are a very specific course of events that need to come into play in order for the sector to return to the glory days of the 1990s and early 2000s.

One to One: Pier Posthuma de Boer