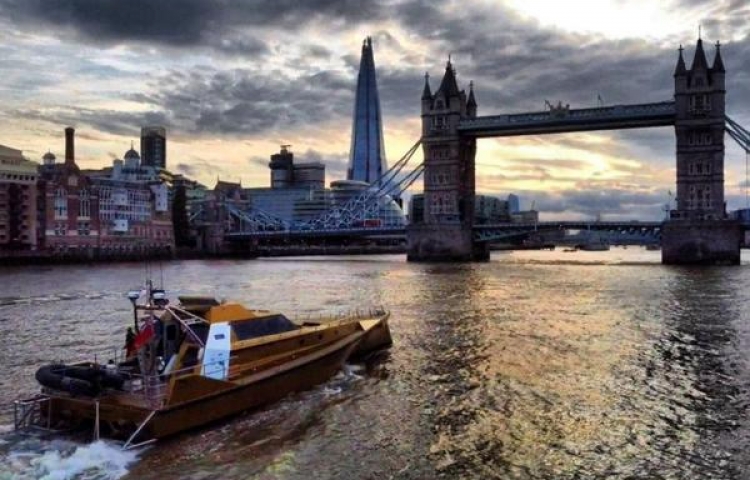 It was quite funny to see the startled faces of corporate lunch-goers in St Katherines Dock when the Thunderchild II turned on its quad Caterpillar 650hp engines. Finding the vessel in the quaint marina was an easy task - follow the deafening noise reverberating off local residents' balconies until you see a big golden military feat of naval engineering amongst the various narrow boats and fishing vessels. I joined just as the team were preparing for their world record attempt to go from London to Monaco in just three days, allowing themselves only four brief stops for fuel.

The vessel alone is outrageous. Thunder Child II has an LOA of 23 metres, a beam of 5.2 metres and a lightship displacement of 24,000kg, featuring a fully cored FRP hull and superstructure in vinylester and E-glass. Its innovative hull design effectively pushes through and tears apart waves, allowing it to operate in Force 10 storms and reach speeds of up to 54 knots. The interior, somewhat akin to the Millenium Falcon, includes a confusing array of switches, knobs, dials, buttons, remotes and controls. As you would expect, luxury and comfort weren’t exactly at the forefront of the designer's mind when he was drawing up the sketches for this particular boat.

Have a look onboard THUNDERCHILD II. The vessel is currently attempting to break a world record as it races against the clock from London to Monaco to raise funds for @GreatOrmondSt.

The galley/pot noodle station features a microwave that has never been used before and a hob that has never been used before. Opposite the pot noodle station, on the starboard side, sits a very expensive Nespresso coffee machine. This vital source of caffeine has very obviously been used before. At a glance, one could be forgiven for assuming that perhaps the crew were also taking a medium to large size dog on the trip. But in fact, the thin mattress nestled in the corner of the helm is where the crew will be taking turns to catch some rest.

The crew onboard, Nick, Ben, Tristan, Alex, and Max have now left London’s Historic Tower Bridge and will be briefly stopping in Guernsey, A Coruna, Cadiz, and Palma Mallorca before well-deserved beers in Monaco on Saturday night. They will be carrying a letter from the lord Mayor of London, Vincent Keaveny, to Prince Albert of Monaco. As usual with these attempts, the team will be raising money for charity - this time for Great Ormond Street Hospital.

Click on the start exploring button to see the route

Captain Nick revealed the significance of the attempt, “We also own a company called AMPS, which is advanced marine propulsion systems. And what that company is doing is looking at saltwater-based fuel cell systems. In order to do that, we have to understand what an endurance boat does and push it to the limits because there's no point just developing a system for a superyacht or sports cruiser or whatever without doing that. Otherwise, it doesn't work. In order to deal with the technical challenge that we think exists, we need to go right back to the basics of design with all the engineering infrastructure, and get all of that working, once we've got that done, we can then design a new kind of boat. So we are really taking a back-to-front approach.”

Safehaven has already agreed to build the hull for the concept that Nick is proposing. The team will be logging all of the data from the trip to use for the boat that they plan to build in 18 months' time. Nick also revealed that Thunderchild II is also an incredibly sustainable boat because of the technology on board. 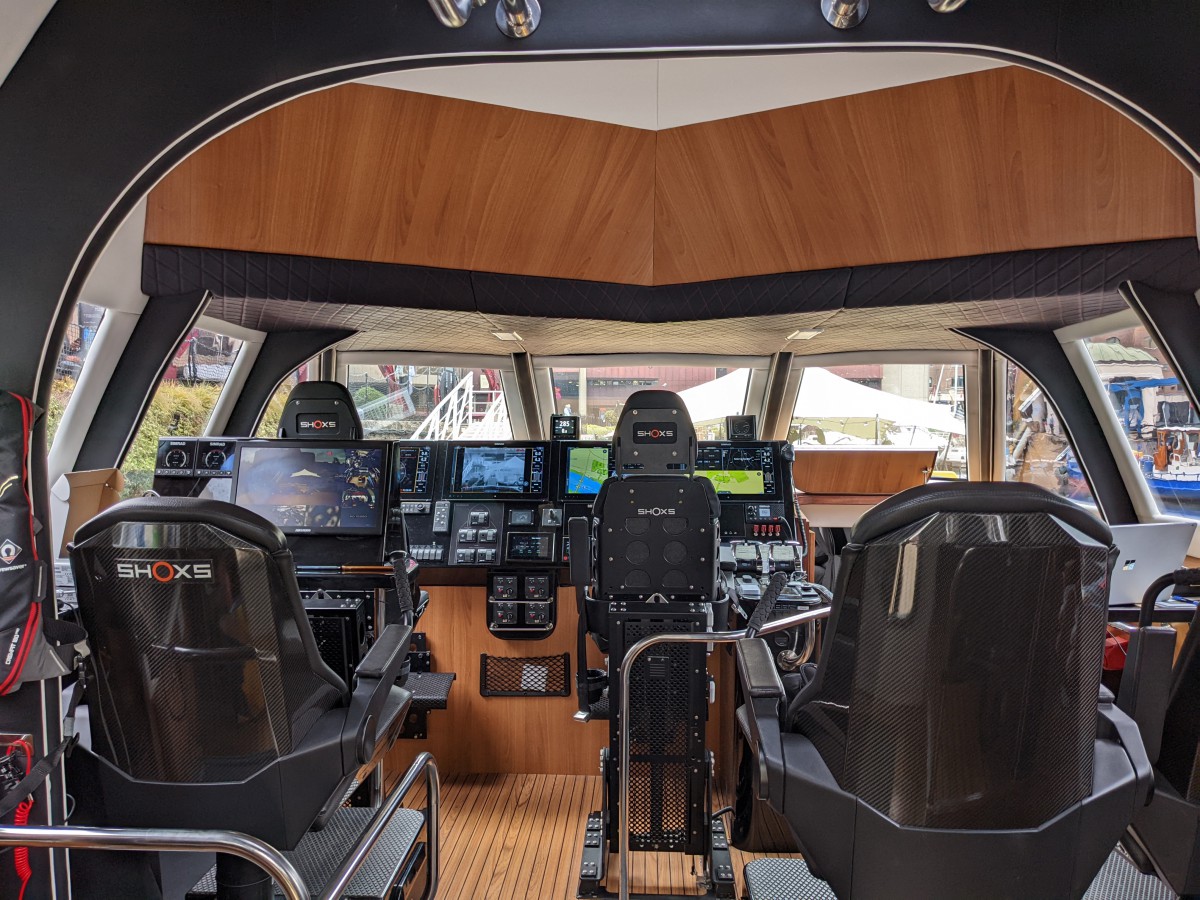 “This boat is already incredibly environmentally friendly. We did an ESG report for the Monte Carlo Yacht Club in relation to, fuel use, pollution, and all the rest of it. If you compare this to any boats of similar length and size, and use, our fuel use is substantially less. Partly because of the aerodynamics of the boat and the hydrofoil. We believe the next generation of marine craft will be a huge combination of a range of different technologies. But in order to get there, we have to burn carbon. The membrane and inverter technology and the engine system all work on paper. But in practice, we’ve got to prove it.”

For this trip, Nick jokes that it's mainly just about avoiding dragging lobster pots across the Atlantic at 40 knots. But it will surely be a test for not only the endurance of the vessel but also the crew on board. Should all go to plan, they envision taking Thunderchild II on a trip around the world next year. 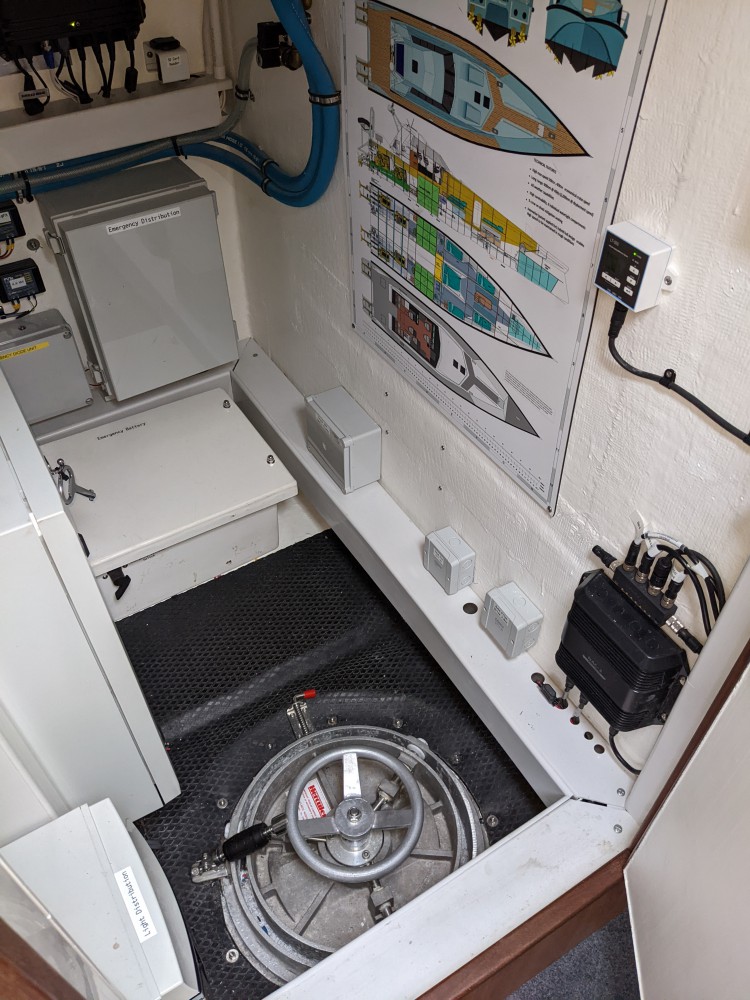 Escape hatch (in case of capsizing)

If you would like to guess their time and donate £10 to Great Ormond Street Hospital, click on the link below. Alternatively, you can find out more about the 54 Knots projects and their plans for the future here.

Talking without action is just talking