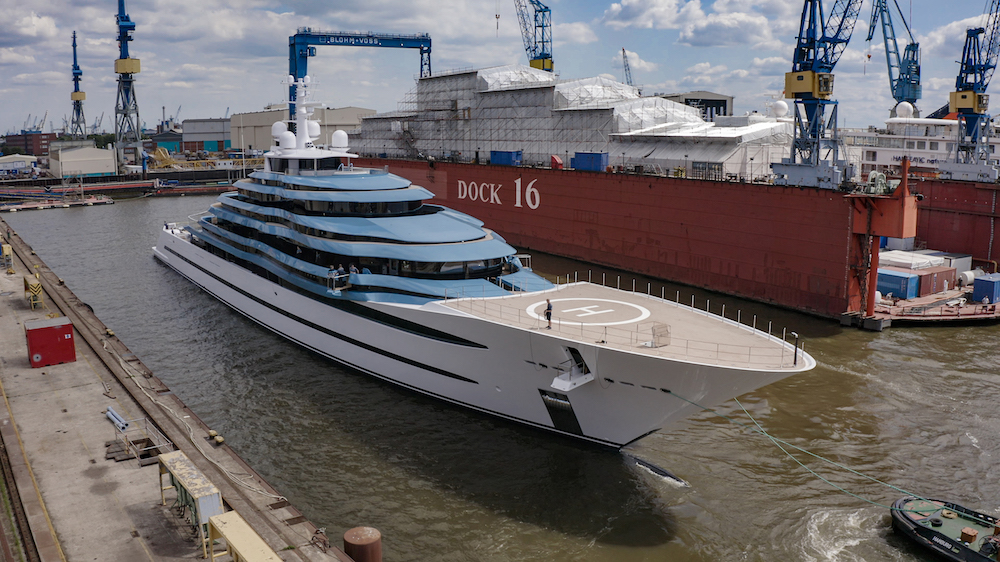 Lürssen has recently redelivered 110m Kaos (ex Jubilee) from its Blohm+Voss facility in Hamburg. At 110m, Kaos represents the largest refit to be undertaken at Lürssen to date and, having originally been built by Oceanco, highlights the German superyacht-building stalwart’s willingness to tackle competitor projects.

“We are very satisfied that we achieved what we set out to do,” comments York Ilgner, director of Lürssen Yacht Refit. “It was a complex refit that was challenging at times, but it has been very successful.”

“What you see from the outside already looks significant, but the majority of the work was done on the interior,” says Thomas Dapp, project manager for the refit. “Overall, we renewed 1,500sqm of interior spaces.”

“The owners were heavily involved in every aspect of the project,” explains Ed Beckett from Burgess. “This was an incredibly demanding project particularly in relation to timing and quality expectations – the end result is really quite exceptional and was only achieved with great teamwork from all involved.”

Exterior modifications on the main deck and bridge deck aft were completed by Sam Sorgiovanni, with Raymond Langton Design creating the interior.

In recent years, refit has become an increasingly integral part of the Lürssen business model. The shipyard, which is perhaps best known for its large new build projects, has become a serious competitor in the refit market.

“Over the last few years refit has developed into a core business for Lürssen and, as with Kaos, a yacht doesn’t have to be a Lürssen to benefit from its world-class facilities,” explains the yard. “Eight shipyards across a Northern Germany allow multiple yachts to be refitted at the same time, across an array of covered sheds and drydocks, while manpower of over 2,800 people, including over 700 engineers and naval architects, are able to tackle any project. Although these projects will differ in scale and design, the ultimate outcome is always the same: that the yacht’s life expectancy and performance will be again comparable to that of a new build and the core value will be enhanced.”

Increasingly, Lürssen is positioning itself as a shipyard that competes across a variety of size sectors and markets. The German outfit, that is typically recognised for building some of the world’s largest superyachts, has made it clear in recent times that it is a legitimate competitor for smaller (55m+) new build projects and refit work.

One to One: Martin Baum

The Buyer Journey: The importance of class