Cantiere delle Marche has announced the launch of their 43m explorer yacht Acala.

Acala takes full advantage of CdM’s experience and its approach to explorer yacht building. Acala has been commissioned by an experienced yachtsman who, over the years, owned yachts built by shipyards such as Feadship, Lürssen, Blohm and Voss.

“I am delighted and proud with this milestone launch,” Vasco Buonpensiere, CdM’s co-founder and Sales & Marketing Director, says. “The trust this owner confirmed in CdM gives us the highest reason for pride. It is a statement of appreciation for both our yachts and ourselves as a team always committed to the owner’s satisfaction. The mutual trust established between this client and CdM team has been pivotal to the good result of the whole process that led to the completion of such a complex project.”

“The work on technical specifications has been extremely detailed and it lasted almost 12 months to achieve a double result: to build a 43-metre yacht with the most detailed and comprehensive specs we have ever drawn up and to proceed with no need for major modifications as construction progressed,” Vasco Buonpensiere maintains. “In the light of this approach and procedures, within the team we joke around saying that we have built the smallest 80-metre yacht ever built!” Buonpensiere says.

Acala introduces a new collaboration with Horacio Bozzo Design. “The aim of our design work is the pleasure of seeing the owner’s desires taking shape and recognizing himself in it,” says Horacio Bozzo, yacht designer and naval architect based in Viareggio, Italy. “Designing an explorer for an experienced owner who grew up around boats and understands yachting perfectly, is very gratifying,” Horacio adds. “We started from a white piece of paper and brainstormed a lot with him to fulfil the whole family needs.”

Her profile with a raked bow and compact superstructure captures an explorer vessel combining it with the elegance of a luxury yacht. Large windows on the main deck whose mullions seem not to join the superstructure are Acala’s profile signature features.

Guest areas are spread over three decks plus a sun deck. Acala features an organised interior layout that sleeps twelve guests in six suites. A large lobby sits in between the main salon and guest night quarters. The full beam main deck, from amidship forward, is dedicated to guests and owners. Three large VIP suites and the owner’s suite to the starboard side are flooded by natural light from large windows. Two twin cabins are located on the lower deck.

The salon on the main deck and a panoramic sky lounge on the upper deck with dining area have been designed and decorated for indoor relaxation and entertainment. The cockpit features dining and lounging areas, and a swimming pool. A large and partially shaded sun deck integrated into the profile provides the social hub for Acala’s guests with an al fresco dining, bar, sunbathing area alongside a second swimming pool. Acala interior design is by Mexican architect Simon Hamui.

She has a full displacement naval architecture by Sergio Cutolo/Hydro Tec offering large volume (440GT). Engineering has been developed by the yard technical department in collaboration with Hydro Tec. Like all explorer yachts built by Cantiere delle Marche, she features a steel hull and aluminium superstructure.

Acala will have a range of above 5,000 nm at 10 knots and a top speed of 14 knots. An expansive lazarette provides a large storage area needed for many cruising necessities, water toys, diving equipment, etc. The main tender is stored on the upper deck forward. Crew quarters and service areas are functional and well-appointed, as requested by the owner. Five cabins are on the lower deck alongside a crew mess opposite a professional galley and the captain has his own cabin on the upper deck next to the wheelhouse.

“CdM’s strategy to dedicate one slot per year to fully custom projects proved to be successful and extremely important for the technical growth of the shipyard. Building these one-off vessels is a great opportunity for our team to learn something new and to work out of its comfort zone: this is the only key to move forward and improve, in our opinion, and that’s why we opted for this strategy,” Ennio Cecchini, CDM CEO says. “Being chosen by experienced owners such as this gentleman who decided to have his second yacht built by us, after having owned yachts built by the most reputed Northern European brands, is the best possible prove that our commitment, dedication, technical skills and quality are second to none.” 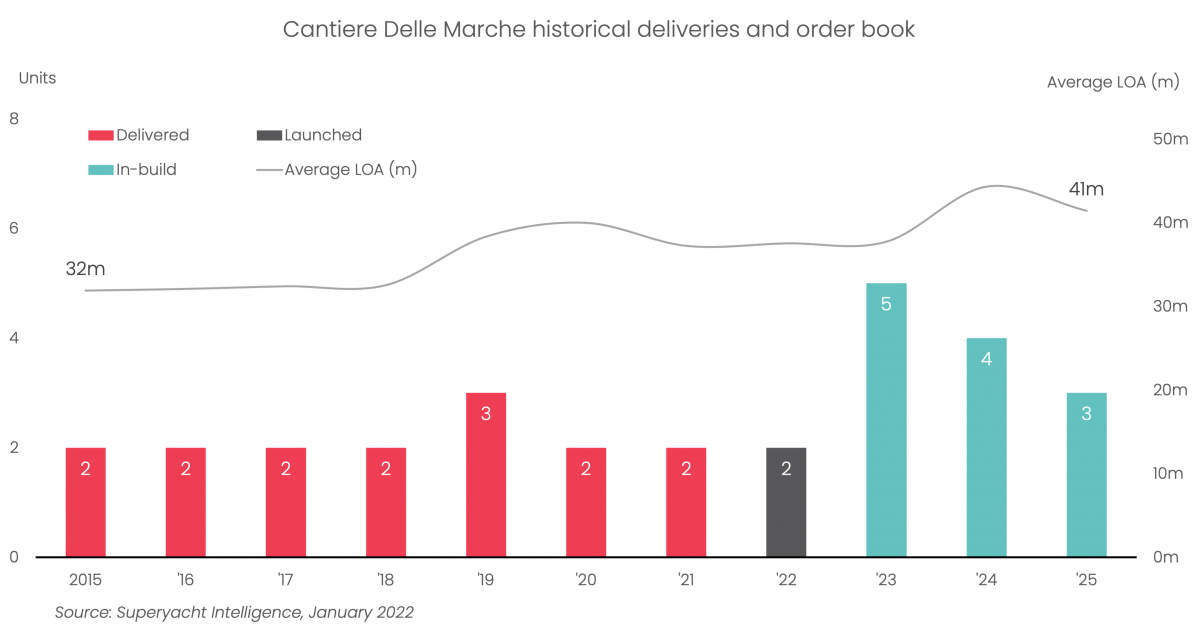 The above graph highlights Cantiere delle Marche's deliveries since 2015 and their average LOA(m). In the seven years between 2015-2021 CdM have on average made two deliveries every year, with the projected order book looking to increase this average.