The importance of intelligence in forecasting and analysis… 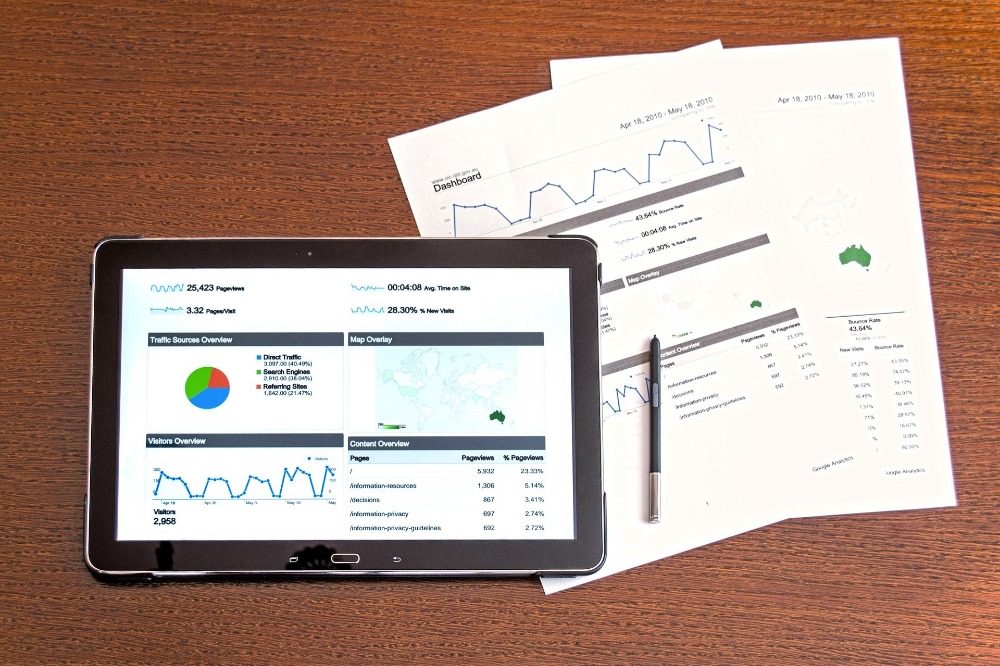 As a Data Analyst at The Superyacht Group, either on behalf of our in-house team of journalists, or as part of our consultancy proposition, I am often asked to make forecasts regarding the future of the industry.  The data can be in the form of brokerage sales, migration traffic, berthing demand, but most often the requirement is simply to forecast the number of annual superyacht deliveries over an allotted period.  There are, of course, many ways to undertake this intriguing task, with some methodologies more complex and detailed than others.  And I’ve often wondered just how good these forecasts will prove to be.  The very nature of the delivered fleet, with its slow pace and low yearly delivery numbers, can make the process somewhat challenging.  So as an investigative task to perform over the Christmas break, I decided to plot two forecasts for the previous 10 and 20 years, and then compare them to the actual delivery and fleet numbers to see how they stack-up.

For the benefit of time, I have used a very simple forecast method based on existing values that follow linear
regression.  Forecast one is a prediction of yearly deliveries from 2000 onwards, using delivery data from 1980.  Forecast two also uses delivery data starting at 1980, but only forecasts from 2010 onwards, and uses actual delivery figures for the previous years.  I’ve chosen to perform the two forecasts this way as I wanted to see how different the fleet could be estimated, using data from both before and after the construction highs of 2006 to 2010.  Could the “boom” years have been predicted, and if so, would the data suggest that trend continue?

When looking at figure one, we can immediately see the closeness between forecast one, and the actual delivery figure for 2021, both 175 and 157 respectively.  Forecast one, using delivery data from 1980 onwards, failed to predict a rapid upturn in deliveries at the turn of the century, maintaining a steady yearly growth rate of 2.2%, versus an actual growth rate of 2.3%.  Whilst you could argue the forecast was making reasonable assumptions by the end of 2021, it would still fall 914 deliveries short of the actual overall fleet total (see figure two.)

Forecast two meanwhile, coming off the back of the strongest period of fleet growth in the history of the industry, suggests an annual fleet growth rate of 4.8% between 2010 and 2021, versus an actual growth rate of -3%.  In reality, the global financial crash of 2008 somewhat inevitably led to a downturn in delivery numbers, as both clients and builders went through a period of enforced retrenchment.  The model fails to recognise the slight downturn in the delivery numbers of 2009 compared to 2010 and assumes that fleet growth will continue at a similar pace. Remember, in 1980 there was just 24 deliveries, and the model will have noted an average yearly growth rate of 9.5% during that time.

Clearly, no forecast model can predict a global financial crash, as we saw in 2008, or indeed a global pandemic, as we’re seeing today.  And to present delivery figures of 411 in 2021 without scrutiny would be folly.  We know that there are fewer active shipyards today than there were at the height of 2008, and to expect a fleet size of almost 8,000 by the end of 2021 is simply unrealistic.  However, we also know that the number of UHNWIs with the wealth needed to build or purchase a superyacht is increasing all the time.  According to the FT.com in May of this year, the billionaire population has risen by more than 700 since the start of the pandemic, with billionaire wealth increasing by more than $5trillion.  This would therefore suggest there will still be plenty of individuals with the required wealth to be a part of the superyacht industry for many years to come.  These are just some of the factors that need to be accounted for when making a fleet forecast of any kind.

At The Superyacht Group, we use a range of datasets and proprietary in-house modelling to predict our industry’s future, more of which can be read about in detail in the forthcoming issue 212 of The Superyacht Report.  But the somewhat inaccurate numbers presented by the two models highlight further the need for informed data sharing within our industry, and the ability to look at the numbers intelligently. 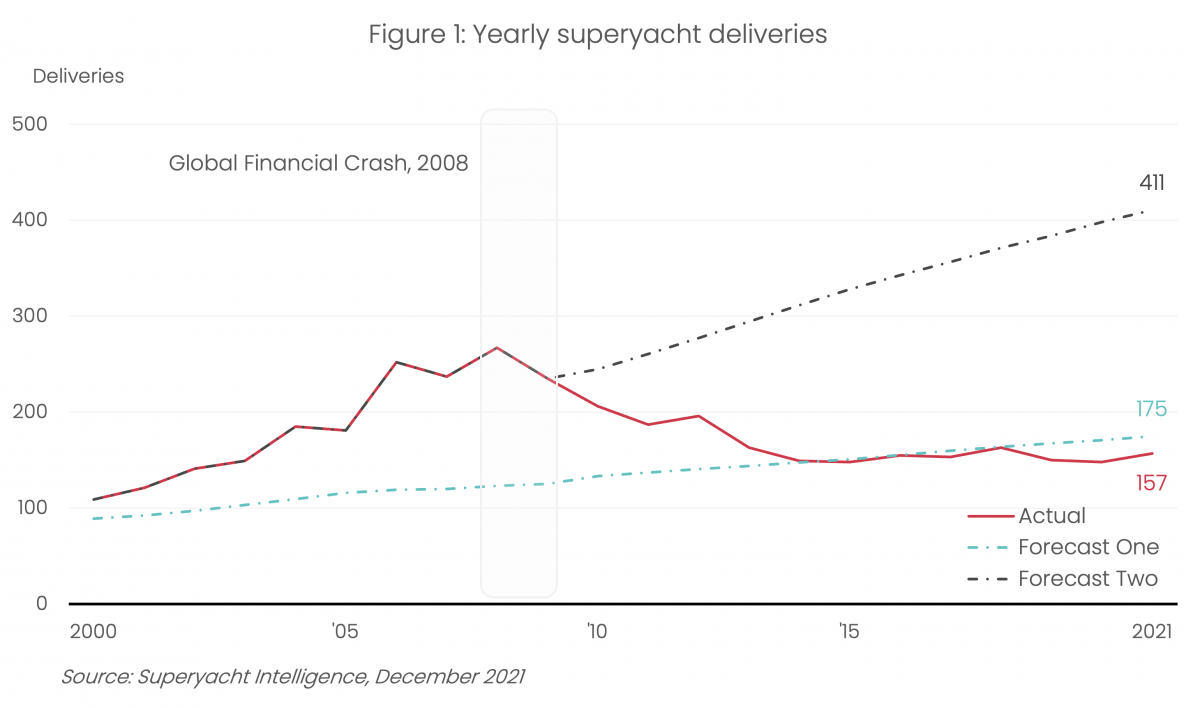 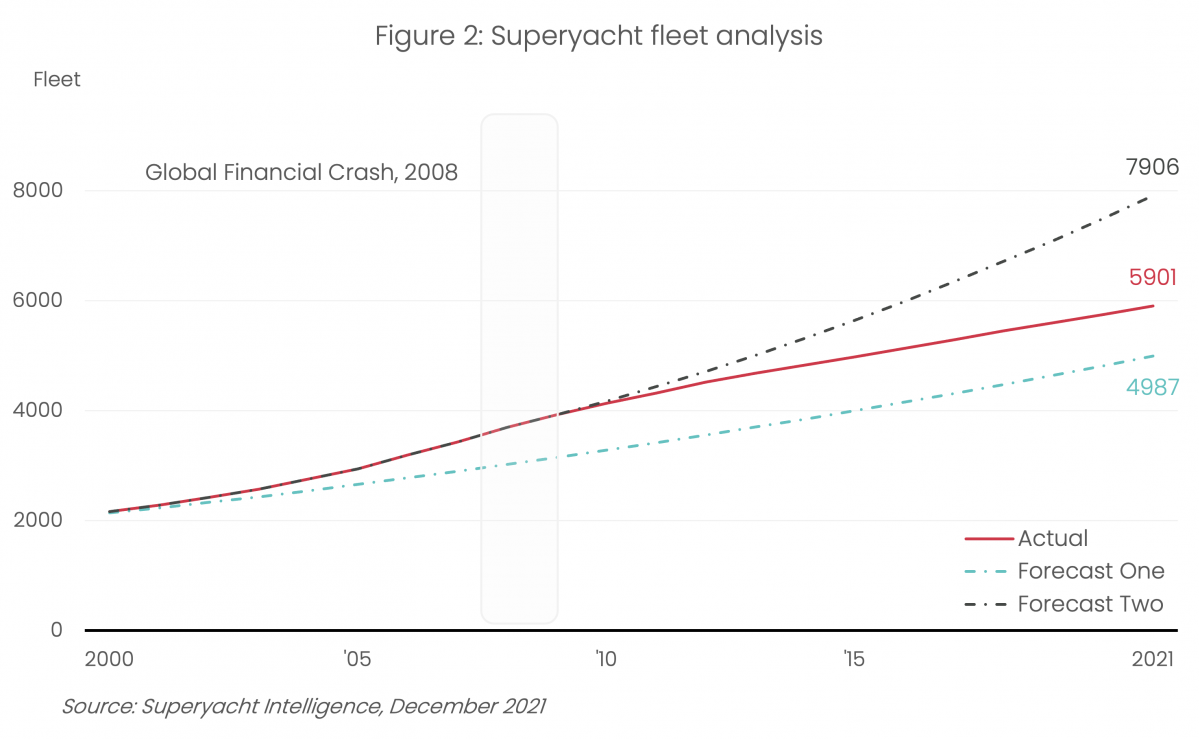