SuperyachtNews.com - Business - Superyachts in 2030 – What has to change? 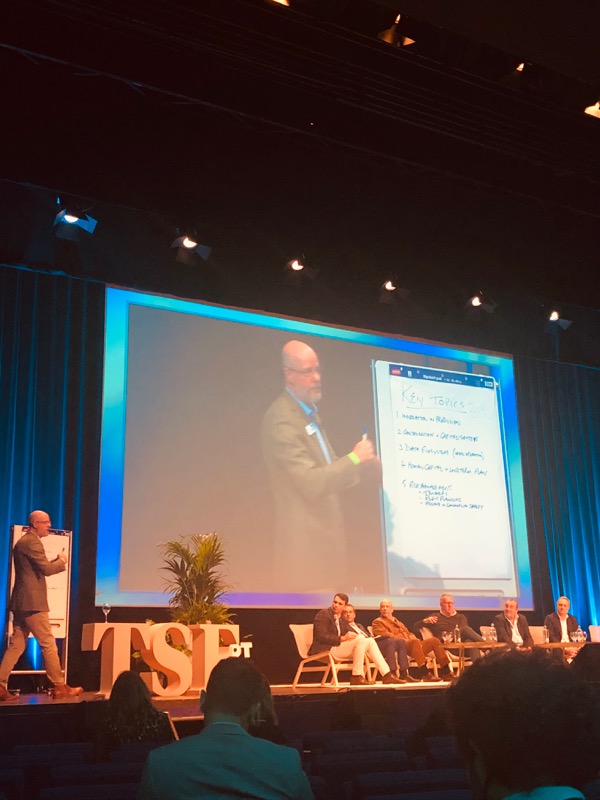 The second session of The Superyacht Forum Live was a panel discussion about what has to change in the industry leading up to 2030. The aim of the panel was to present topics for debate and discussion identifying the core issues that we need to optimise, change, stop doing and improve in our sector. Martin Redmayne, Chairman of The Superyacht Group was joined onstage by Joseph Adir of OceanTech Aquisitions, Paolo Casani CEO of Camper and Nicholsons, Dr Daniel Chatterjee of MTU, Paul Miller director of Millstream Underwriting, Fiorenzo Spadoni UK director at RINA, and Gary Ward of Jotun.

The overarching theme of our event here in Amsterdam kicked off with Joesph Adir sending a forewarning to fellow delegates. Although in the previous session the market was described as a ‘feeding frenzy’, Adir warned, “Don’t get too dizzy with all of the cash that appears to be in the bank. There are too many deposits in too many shipyards which is making everyone feel very wealthy. But we have no idea what is going to happen in the future.”

The lack of human capital is of course one of the major sticking points and future hurdles facing the industry. While this was addressed on stage, delegates in the crowd were also invited to share their opinions. What was eventually noted, was that the lack of human capital is simply the source of an issue which branches out into a number of individual difficulties, such as; Hiring from a diverse talent pool, shifting ambassadorial roles onto superyacht owners and increasing the right kind of publicity that will expose the next generation to a burgeoning industry.

Gary Ward of Jotun was applauded for his analogy which emphasised the importance of working collectively as an industry all the way up the supply chain. Ward utilised a piece of text from his nine-year-old daughter's science textbook which highlighted the various consequences that would occur if all 7 billion people jumped on the spot at the same time, and the profound effects it would have on the world. Of course, the example was meant demonstrate the power of collective action, something notoriously absent from the superyacht industry agenda. At the end of the speech Kiran Haslam of Princess yachts told the crowd, "This is the guy everyone is going to want to talk to at the bar later."

Paul Miller, of Millstream Unlimited, highlighted the lack of safety and security regulations on private vessels, something which creates a number of headaches for those in the superyacht insurance sector. Miller posed the question to the audience, “Why is that a commercial vessel is so much safer than private yacht when they are both the exact same size and specifications?”

Forum delegates also discussed the need for innovation in energy and propulsion, Dr Daniel Chatterjee, of MTU Rolls Royce, led the conversation arguing that, “A lot of really great technology already exists, it’s just a matter of getting it out there to the clients.” Technology in a more general sense, was also a major talking point, with Fiorenzo Spadoni stating that there needs to be further advancements in respect to the ‘data ecosystem’. Generally speaking, most superyachts have a wide range of technology systems, to be able to better integrate that, and have a platform which allows for better inter-communication between services, would be incredibly useful for captains and engineers alike.

Ken Hickling our interim co-chair for the forum rounded off the session by identifying those main changes mentioned above, and delegating ‘fish bowl’ discussions for the crowd and speakers to take part in. All speakers and members of the crowd agreed unanimously that data sharing and communication between stakeholders needs to be improved, certainly before 2030.

Everything you need to know about The Superyacht Forum Live