SuperyachtNews.com - Business - Sanctioned superyachts in Europe: the story so far

The recent media storm surrounding the freezing of Russian luxury assets has felt intense and also somewhat disjointed. For the average reader of business news and current affairs, it could be hard to tell exactly what is going on in the world of superyachts and how significant these ‘seizures’ really are. At a glance it would appear as if governments around the world have engaged in a highly coordinated and dramatic flurry of interceptions and arrests against Putin's inner circle. But the reality is that the freezing of (so far 13) superyachts has been a relatively long and arduous process, with many beginning to question whether the West has simply cut off its nose to spite its face in the process.

The following graph represents active superyachts in Europe which have been officially frozen by either the EU or the UK, it does not take into account the various superyachts in-build in European shipyards which have allegedly ceased production. The following statistics also don’t take into account the countless number of yachts who haven’t been officially sanctioned, but are still being denied the necessary labour and materials to function properly due to supposed relations with Russian citizens and passport holders. 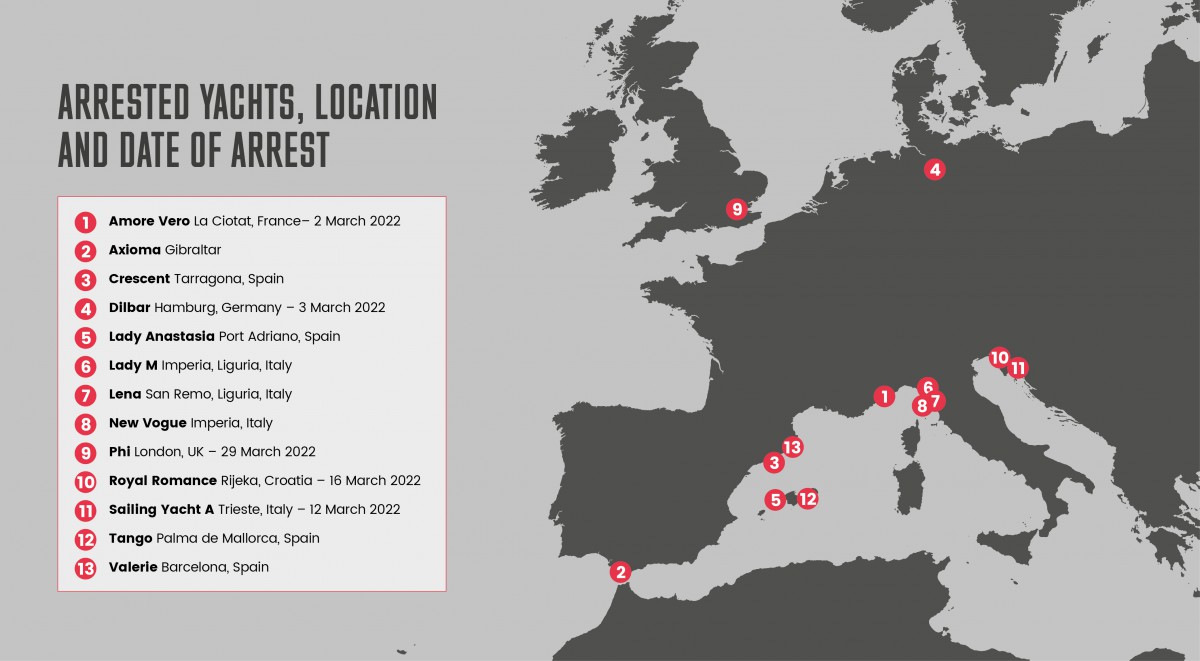 According to The Superyacht Agency, since the 2nd of March - when the first superyacht Amore Vero was arrested, there has been roughly €12.09 Billion worth of superyachts which have been frozen. The average value of the 13 superyachts arrested so far equates to roughly €161 million.

M/Y Dilbar was certainly one of the most high profile superyachts to be frozen, the incident took place while the vessel was out of the water in Hamburg just a day after Amore Vero was arrested. With an estimated value of more than half a billion it is also the most expensive yacht to have been frozen, followed by Sailing Yacht A which is valued between €400-450 million.

So far it remains to be seen whether or not there will be any further action against Russian owned superyachts. Since the US launched its international task force to come after oligarch assets in foreign countries, it has only so far detained the 136m Flying Fox in the Dominican Republic. While many believed this would snowball into further action against superyachts globally, there still remains a number of vessels who are famously owned by known oligarchs that have remained relatively unscathed compared to others. 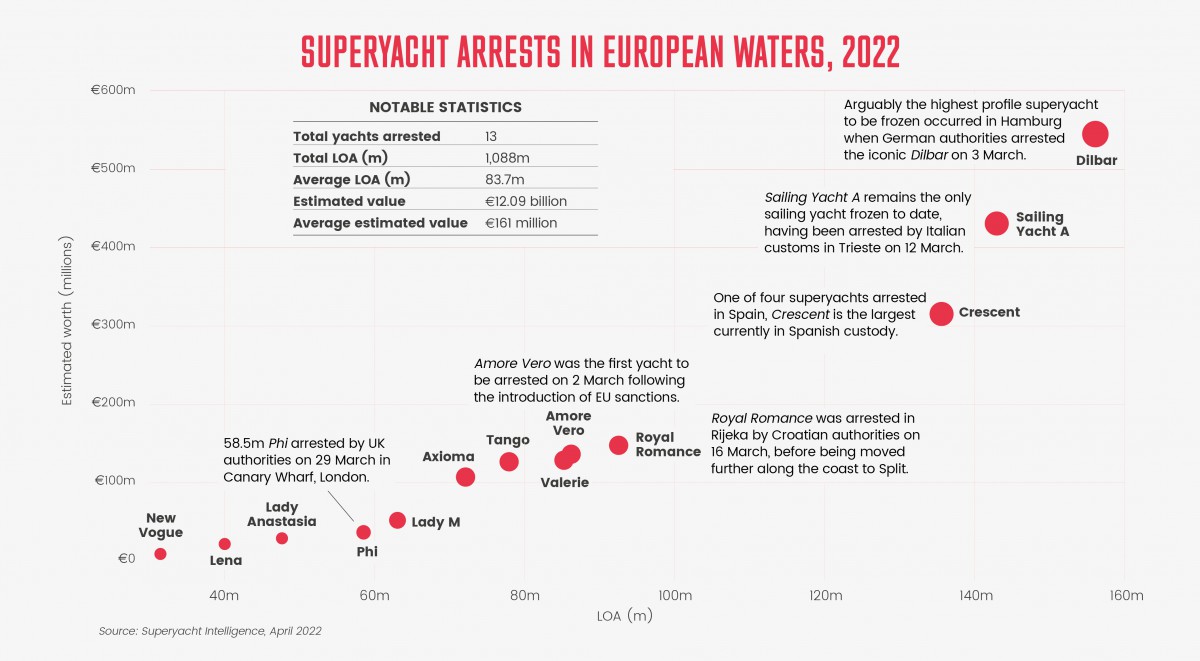 It is incredibly difficult to estimate exactly how many more superyachts are likely to be frozen over the duration of the conflict and the sanctions. With that being said, The Superyacht Agency previously identified that there are around 370 superyachts over 30m in length that are ‘Russian-owned’ - this equates to about 8.8 per cent of the active superyacht fleet. Furthermore, the bigger the yacht is, the more likely it is to be owned by a Russian – Russians own just over 29 per cent of all superyachts over 90m in length . Moreover, the average length of a frozen superyacht is 83.7m, which cooperates The Superyacht Agency’s ownership statistics.

The actions against these assets have had an adverse effect on the current state of the market, not necessarily just in terms of impact to shipyards specifically with some having outlined their limited exposure, but there will be an ongoing human cost to crew and those businesses that are reliant on Russian clients. With that being said, there is a sense that the initial frenzy of hunting luxury assets is beginning to die down. The question now on everyone's lips is not necessarily how many more yachts are going to be frozen, but what will happen to those that already have been.