Nobiskrug, the German shipyard that specialises in the construction of custom superyacht projects over 60m, has filed for insolvency. The Neumünster district court has appointed Hendrik Gittermann, a restructuring expert from Hamburg law firm, Reimer, as the provisional insolvency administrator.

Gittermann and his team are currently in the process of analysing the company’s financial position. His focus is to determine a variety of options for Nobiskrug over the coming weeks.

“The operation will continue without restrictions – including current yacht new build and the processing of repair orders. The wages and salaries of around 330 employees are secured for three months through the insolvency money from the Federal Employment Agency,” says Gittermann.

In terms of what this means for the future of Nobiskrug, “It’s still too early at the moment. Now it is a matter of holding discussions with everyone involved as quickly as possible and ensuring smooth operation,” continues Gittermann. This particularly includes the need to maintain the workforce. “Because insolvency often does not mean the end of a company, but the chance of a debt-free start."

While Gittermann refused to comment on current press reports and speculation surrounding the causes of Nobiskrug’s insolvency, it is worth considering what ‘insolvency’ actually means in the context of German law and what the next steps are for the business and the restructuring team.

“The insolvency process is not simple, legally, because there are many directions that it can go, depending on the analysis of the insolvency administrator,” comments Tim Schommer, partner at Clyde & Co. “In the case of Nobiskrug, it is clear from the information made available by Mr Gridmann that the aim is to keep everything up and running. While the process itself is complex there are two common scenarios.”

According to Schommer, it may be the case that there is a cash-flow problem. The amount of incoming cash is simply not enough to cover the business’ arranged payments. This could happen for a number of reasons; perhaps the owner of a large new-build project has refused to pay their instalments, the payments of which were relied upon to cover the costs of subcontractors and so on. This is a simple example of a cash-flow problem that may result in a business filing for insolvency. However, in this instance the money owed to creditors could be recoupable through the use of loans, agreements and the courts, provided the insolvency administrator determines that this is a feasible course of action.

The second scenario, which would be of greater concern, is a fundamental balance sheet problem and over-indebtedness. In this instance, the business would enter insolvency when it became apparent that, even if all payments were processed as they should be, the business would still be unable to pay its creditors. Simply put, in this scenario, the business is not profitable. In this instance, it is the role of the insolvency administrator to restructure the business and come up with a plan that ensures all creditors are treated equally and receive what is owed. In the event of the creditors being paid, the business is free to resume operations. However, in the event that no solution is forthcoming, the sale of the business and/or its assets is a possibility.

While the exact circumstances behind Nobiskrug’s insolvency are as yet unconfirmed, the news does highlight the fragility of business models that rely solely on the production of large bespoke new-build superyacht projects. The loss of a contract or two, a significant legal dispute, or the withholding of payments can have a catastrophic impact on the fortunes of such a business. 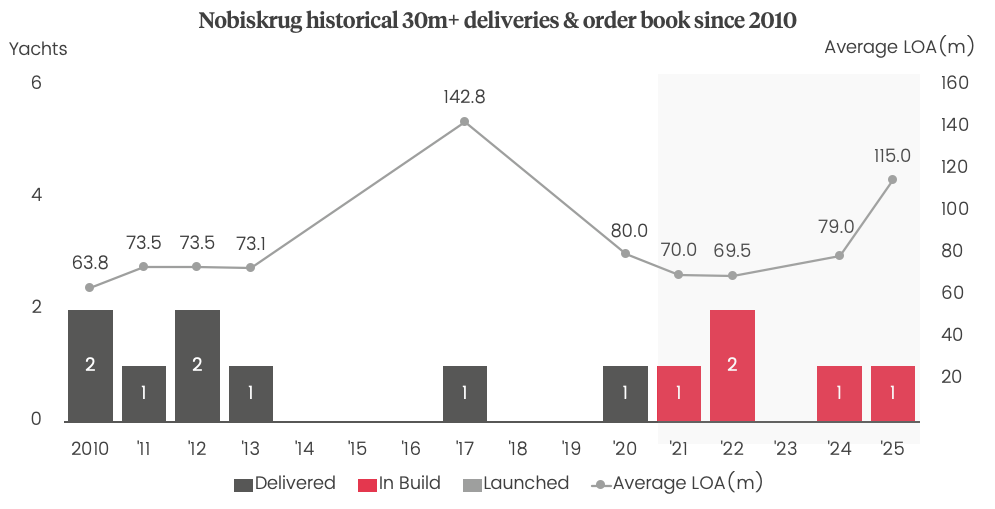 According to The Superyacht Agency, Nobiskrug has delivered an average of 0.7 superyacht projects a year since 2010, with the periods of 2014-2016 and 2018-2019 yielding no deliveries at all, and only the single delivery of 142.8m Sailing Yacht A falling between these periods, a project that is rumoured to have caused the yard significant issues. That being said, with six projects either ordered or in build (with only five having set delivery dates), it did appear for all intents and purposes that the German superyacht manufacturer was returning to a period of stability. Using a proprietary algorithm, The Superyacht Agency has estimated that the total value of the six projects underway at Nobiskrug amounts to around €810 million.

Among Nobiskrug’s assets are two shipyard facilities in Rendsburg and Kiel-Gaarden that have a combined area of 430,000sqm and have the capacity to build the very largest superyacht projects. To read a full dossier of Nobiskrug’s capacity and performance, as well as some competitor analysis, click here.

While news of Nobiskrug’s insolvency may have come as a shock to some, with there being no statement issued at the time of writing, let us hope that the insolvency administrator is able to find a solution to Nobiskrug’s financial situation. Many will undoubtedly question the financial efficacy of the business and its model, but few will question the quality of the projects that it has delivered.

The Boat Works enters Stage 3 of its development

MGA looks towards the future

Your perception of Nobiskrug