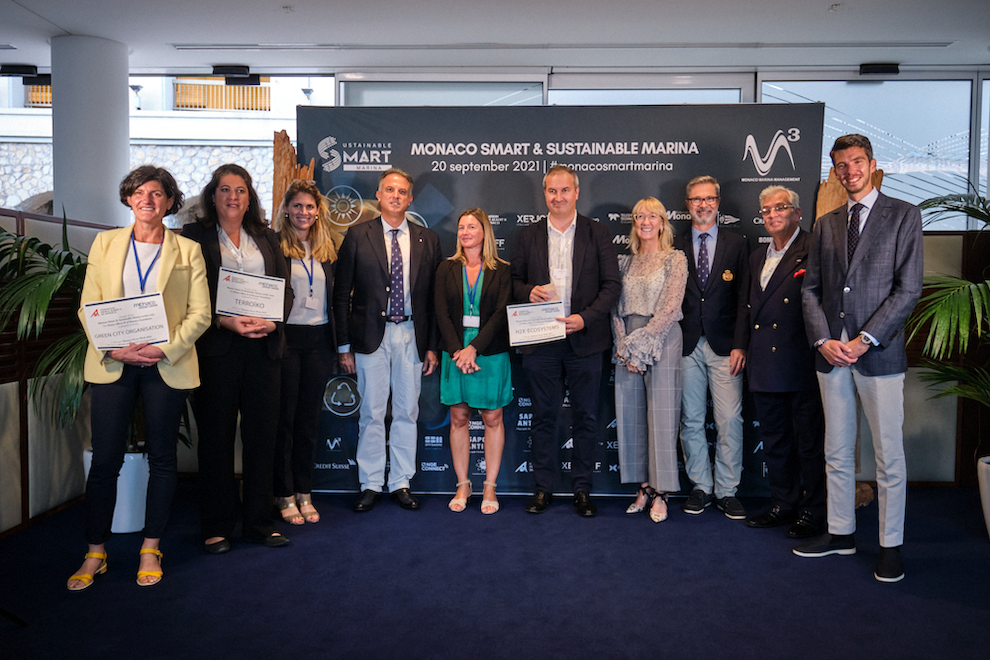 The first Monaco Smart and Sustainable Marina rendezvous has just ended after a long process to select 55 international startups in this initiative organised by M3 (Monaco Marina Management). While demographic forecasts estimate that over 75% of the world’s population will be living in coastal regions by 2035, and given the yachting sector is expanding fast around the world with new destinations and marinas coming on stream, Monaco Smart and Sustainable Marina provides a unique exchange platform to put forward tangible solutions to build virtuous marinas.

The meeting united an ecosystem of 250 people (in-person and online), representing the sector's most important players (owners, shipyards, startups, industrialists, investors) who had an opportunity to discuss a global, collective response to climate challenges and encourage responsible innovation. Among those attending was HSH Prince Albert II, President of Yacht Club de Monaco and HRH Princess Haïfa Al-Saud, Deputy Minister of Tourism, and HRH Princess Sarah Al-Saud, Director of Maritime Development at the Academy of Science, Technology and Maritime Transport in the Kingdom of Saudi Arabia, and first female captain of the Maritime Cooperation Council in Gulf countries.

The meeting was supported by the Prince Albert II of Monaco Foundation and the government’s digital transformation programme, Extended Monaco, alongside Credit Suisse which has established itself as the yachting bank, Bombardier, SBM Offshore, Teledyne, Xerjoff, NGE Connect and Yacht Club de Monaco who hosted the event.

“The global impacts of climate change are expected to continue increasing in frequency and severity and will be irreversible for centuries, even millennia, and are undeniably linked to human activity,” said Marisa Drew, Chief Sustainability Officer & Global Head Sustainability Strategy, Advisory and Finance at Credit Suisse. The financial sector has a role to play, particularly in the blue economy. Investing in sustainable solutions can and should be used as leverage for inspiring strategies for new businesses. The emergency is now, it is time to act - and in a thoughtful manner as evidenced by new resorts along the Red Sea region “inspired by nature to develop a conceptual resort that will leave the coastline intact,” as explained by Nicholas King, in charge of the Red Sea Development project in Saudi Arabia. The European Commission continues to support development projects promoting sustainable maritime ecosystems, confirmed Linos Voskarides from the EC’s Directorate General Maritime Affairs and Fisheries. 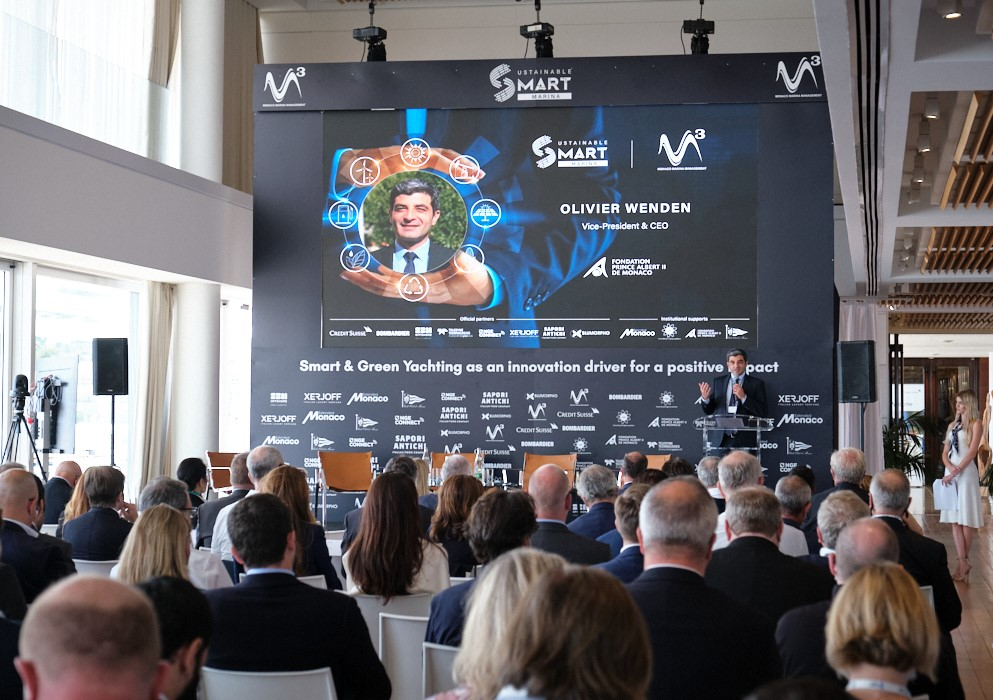 Yacht owners have got the measure of the problem. While Richard Attias and Murat Vargi evoked the need for marinas to be pleasant places to live, Georges Cohen emphasised that before that happens it is vital some key aspects be addressed. Appropriate electrification, as in Monaco, use of a clean fuel so as to no longer rely on diesel generators, application of existing regulations, managing grey and black water, and drinking water, recycling, etc. – all are challenges that many marinas need to address, as highlighted by Marco Casiraghi. Both speakers insisted those who do not respect the environment must pay the price for poor conduct. They were joined by superyacht captain Matthias du Verle for whom these changes should involve the concept and design of a yacht.

Concerns about sustainability took up most of the discussions between operators and developers. Beyond talking about practical solutions, often existing but not necessarily implemented, the international panel (Bahamas, China, Saudi Arabia, Monaco) insisted on the need to exceed the regulations. While everyone admitted sustainable developments involved a big investment, they were seeing the value and not just from an ecological point of view. “Investment in protecting the environment should be included in companies’ accounts and incorporated into the overall value of any enterprise, which is not the case,” believes Brendan Jack, Director Sustainable Development at AMAALA (Saudi Arabia). Wang Dafu, President of the Visun Group in China echoed what had been said before explaining that use of green energy should be a priority combined with a much better use of resources.

There are many opportunities for smart redevelopment of existing marinas with new building materials such as “smart concrete” which helps regenerate marine habitats, noted Christian Denhard, Rybovich Superyachts Marina Director, evidence that solutions could be put into practice now, including those relying on innovations by the startups present, on the one condition of really wanting to do so.

Maintenance and refit providers from the shipyards admitted the challenges were many, partly because they are starting from scratch and because as service providers they faced a complex “dilemma”: big investment in sustainability has an impact on financial returns, as it is not yet possible to turn these investments into higher costs. Although customers are more understanding now, all three believe the road ahead is still long and winding, and say educating crews, workers and even yacht owners is the key. 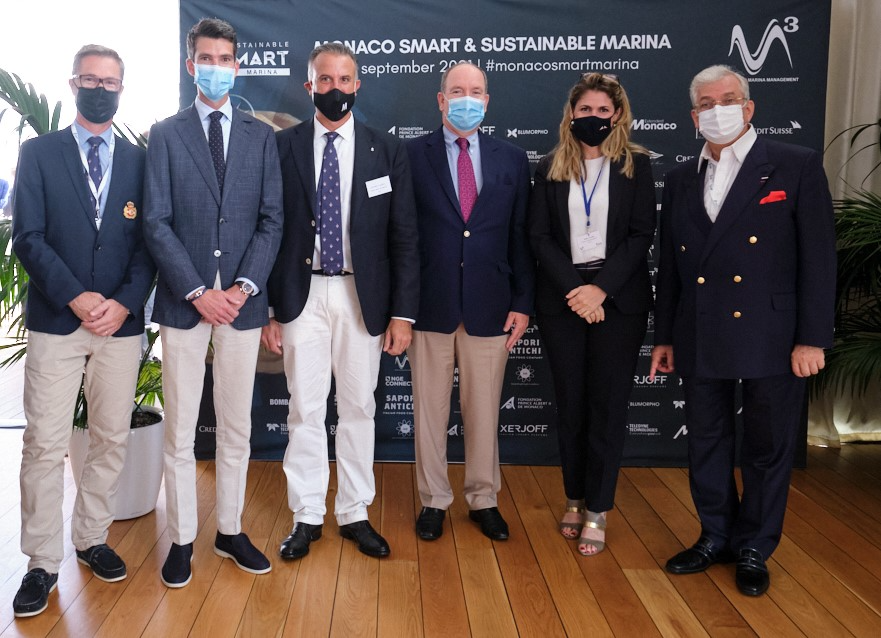 “Most solutions developed for cities can be applied to marinas,” according to Philippe Sajhau, Vice-President IBM France. Regards energy management, Alessandro Pellicano from ENEL-X pointed out that technologies exist and that it is possible to decarbonise a marina by delivering clean fuel to marina users.

The path to sustainable industrial development is through data sharing and transparency which drives digitisation tech players. At the heart of these discussions, the Digital Twin concept continues to prove its worth. A system capable of anticipating the carbon footprint of infrastructure, it can also model the environment and predict how it will evolve with the aid of artificial intelligence algorithms, said Nicolas Leterrier, CTO at Schneider.

David-Pierre Mangiapan from NGE Connect confirmed that a whole range of solutions exist to capture the environment and that savings of up to 20% can be made on water consumption and 50% for energy. Note that optimising resources requires recognising water as a critical resource that requires smart systems to maintain the infrastructure, particularly for detecting leaks. Deploying sensors opens up another group of applications said Nicolas Leterrier. Taking inspiration from electric vehicles, “rechargeable” yachts can supply the grid when necessary. This so-called “prosumer” approach could be an important element when integrating innovative technologies into eco-responsible boats. One caveat however for Mark Brown from Teledyne, is that digital solutions may come with a cybersecurity risk. Earl Presson commented that among startups competing for the Innovation Prize, companies dealing with cybersecurity received their full attention and that this initiative had resulted in them making contact to look at future collaborations.

And The Winners Are… 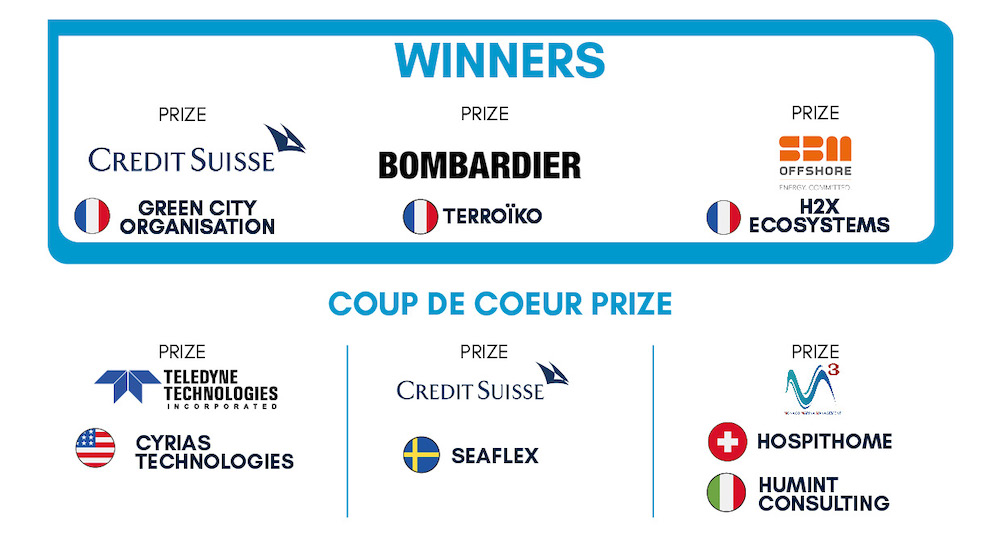 Of the hundred-plus applications, only 55 companies from 30 countries were shortlisted to participate by the experts at Blumorpho. The adventure continued with the Grand Oral of interviews conducted by a jury of experts comprising 32 industrialists investors and representatives from companies who are a reference in their field. Led by Credit Suisse, Bombardier, SBM Offshore, Veolia, Bouygues Construction, Colas, Bosch, Suez, Holcim, PureTerra Ventures, BtoV, Circularity Capital, SNGLR, SMEG, Prince Albert II of Monaco Foundation, Yacht Club de Monaco and NGE Connect, 160 online interviews were organised over a period of three weeks. During these orals, each startup had a chance to defend and promote their project in the hope of winning one of the Monaco Smart & Sustainable Marine Awards announced at the end of the day on 20th September. After a Consensus Meeting (Thursday 16th September), 15 were selected in the following categories: equipment, health, energy optimisation, waste treatment, biodiversity and security. A handful went on to win the much anticipated prizes.

“We are very proud to be recognised by this award here in Monaco. Monaco is where awareness of the need to protect the marine environment was born, which is our raison d’être at Greencity Organisation”, said a delighted Isabelle Gerente, founder of this startup which won one of the three awards.

“Personally, I feel it’s a great achievement,” said Stéphane Paul, CEO of H2X-Ecosystems, another winner. “It’s fantastic for the team. It’s a hi-tech project that fits into an ecosystem to review business models and bring on board products that provide more benefits for the environment.”

For Catherine de Roincé, President of Terroïko who also won an award: “It was a very inspiring day with many relevant talks that will help us stand back from our challenges and reflect (…) it’s a pleasure to receive an award from such a convinced and discerning audience, so I take this as a sign of a very genuine interest in our solutions.”

The winners also have an opportunity to raise their profile even higher, by presenting their company and project at Monaco Ocean Week 2022, organised by the Prince Albert II of Monaco Foundation.

After a packed day of productive meetings and interactions, participants have set a date for another edition in September 2022.

“Promoting young companies who are improving production methods and who through their projects are building the marinas of the future, like condensed Smart Cities, is the essence of this meeting’s philosophy”. José Marco Casellini, CEO of M3 (Monaco Marina Management).

“This first edition brought together an ecosystem of players whose collaboration will make it possible to exploit innovative technologies at the service of sustainable development to achieve carbon neutrality and respect for biodiversity”. Geraldine A. Gustin, CEO at Blumorpho.

“I am not surprised yet again to see Monaco’s pioneering spirit. It has proved very insightful to focus on marinas and yachts as there are so many solutions out there to make them more environmentally responsible. All participants have the opportunity to have an impact”. Bertrand Piccard, Founder of the Solar Impulse Foundation.