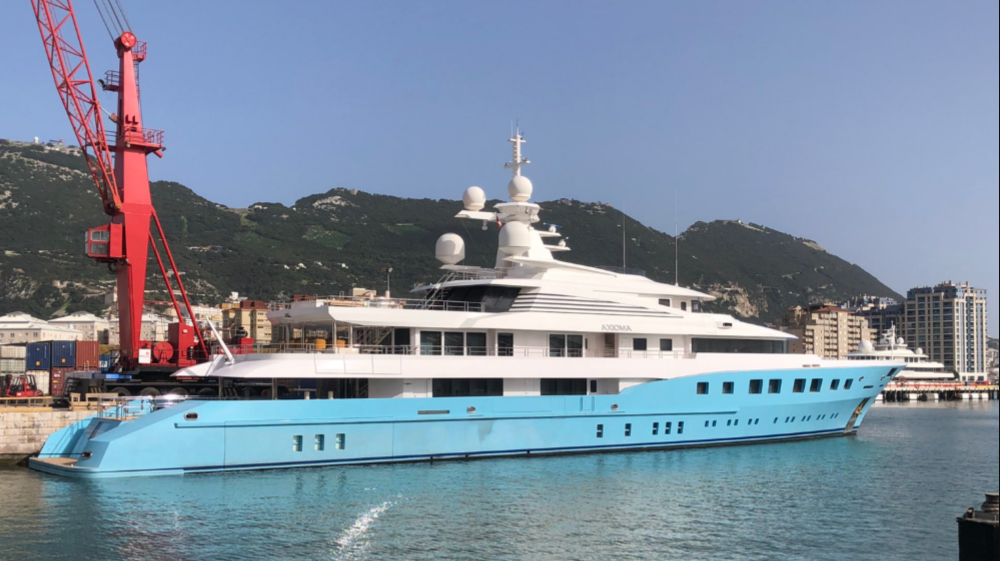 The fate of the 72m Axioma, from Dunya Yachts, has theoretically been decided today. Up for blind auction, it has been reported that Axioma has attracted 63 bids, with the auction administered by The Gibraltar Admiralty Marshall’s standing broker, Howe Robinson.

With all bids sealed, the winning bidder was then contacted before further details are released. This individual will then have 72 hours to transfer 10 per cent of the total bit, with another five days to complete the complete balance. Assuming the buyer meets KYC (know your client) protocols, the remaining balance will be divided between the vessel's creditors, with crew wages protected by MLC.

The months-long process to get to this auction saw high numbers of potential buyers, brokers and representatives visit Axioma. With due diligence applied, surveyors and inspections were also allowed onboard. SuperyachtNews has spoken with sources close to the vessel and auction to paint a more complete picture of this process leading up to this sale. Aside from the eventual figure attached to Axioma, and where this money should go, the story of how it got there across the months following the invasion of Ukraine is in many ways more insightful for the industry than whoever’s hands the vessel transfers to, and at what price.

Even in these unprecedented times, the case of Axioma is unique. The mortgage default and transfer of ownership to financial institution JP Morgan underpins this. Axioma’s previous owner, billionaire Dmitry Pumpyansky, was one of the first individuals sanctioned. Pumpyanksy was the sole shareholder of Pyrene Investments, which he used to take out a $22 million loan with JP Morgan that has since been called in.

In the early days of the conflict and sanctions role out, the industry and observers watched intensely as the various institutions and companies that support superyacht operations took their various stances. The blanket assumption that associations with vessels should be terminated was overly simplistic and ignored the safety of the vessel and crew. Reflecting on the more complete story of Axioma gives insight into the coal face consequences of these early sanctions and reactions from the industry and observers.

Returning from the Caribbean, Axioma was passing the Portuguese island of Madeira when both Flag (Malta) and Class (ABS) terminated their associations with the vessel, in March 2022. As the vessel was then deemed to be cruising without an operational certificate, they were ordered by Flag to report to the nearest port. The Portuguese government, apparently, categorically denied this request and sent a military escort to ensure the vessel stayed outside the territorial limits of Maderia.

This left Axioma in a challenging situation that would be compounded by the continued removal of services in line with the sanctions restrictions. These restrictions, some instant and broadcast widely and others less public, from various providers beyond Flag and Class, received significant attention.  They also saw judgment from media and observers, but the onboard consequences were more complex.

Axioma, at this time, was left without Flag or Class support, finite fuel and with the owner’s management representatives, Flag and JP Morgan all in communication - and all with very different instructions and views as to what the vessel should do. The Malta Registry maintained that the vessel should still approach Madeira, management that it should “go anchor off Africa and wait a few days” and JP Morgan requested the vessel head to Gibraltar.

The position the crew are in, in this situation, bears reiterating. Morocco, at the time, had closed in borders due to COVID. Despite this, the owner's Cyprus based management then demanded the vessel enter port regardless, under their assurances that it was all clear. Without Flag support, if they had and have been arrested, the crew faced a very real possibility that they were on their own in Morocco.

The communications and clarifications with JP Morgan progressed, and the complete legal picture was made clear. However, It was reported at this time that the vessel was then ‘seized’ in Gibraltar due to the sanctions, as the boat had run out of options, and may not have known it would be arrested.

Speaking with those close to the situation, it appears that this was a more calculated decision, taken on the advice of JP Morgan, after negotiation, discussion, and due legal process. Hot takes on youtube and various platforms within minutes can have an impact on what is a delicate process. Not long after the vessel was birthed in Gibraltar, it was placed on the Office of Foreign Assets Control (OFAC) sanctions list, despite the transfer of ownership to JP Morgan, which affected interest from US-based buyers early on.

How these sanctions would be enforced on something as intricate as the operation of a superyacht was not completely thought out as they were enacted. Axioma was one of the first to pass through the system and is a partial test case for the next. When we report about vessels going dark and 'outrunning the law', or cruising slowly to avoid authorities, there are very likely to be deeper rationales at play. Likewise, when Flag and Class deregister a yacht, although completely in line with sanctions, safe operations can be jeopardised. The captains and crew, when cut off in the knee-jerk early days of the sanctions were placed in extremely stressful and complex situations.

Many of the service providers that have maintained their commercial relationship with yachts, and navigated the sanctions, may have more than just financial considerations in mind. I doubt it is all altruism, but the reality for the crew onboard is highly complex. Axioma is a unique case study, as is likely to be whatever happens next with every yacht with a sanctioned owner. The potential transfer of ownership and the conditions by which it occurs will be specific, and we should approach each with informed caution.