Hydrogen is a versatile and clean-burning fuel that is gaining increasing attention as a potential solution to the challenges of climate change and the transition to a low-carbon economy. The energy to produce hydrogen can come from a variety of sources, including natural gas, coal, and renewable energy sources such as wind and solar power. When it is burned, hydrogen produces only water vapour as a byproduct, making it a clean and environmentally friendly fuel.

Its application in the marine sector is vast, but questions still remain around hydrogen’s large-scale use as an energy carrier. The role of classification societies is wide and vital as these questions are addressed. While the superyacht industry has its own unique set of challenges, it is likely that it will follow the path, and crucially, the infrastructure network development of the commercial sectors.

One of the most forward-thinking class societies is DNV, which has published its Hydrogen Forecast to 2050. The full report is available from DNV on request, and the highlighted findings are outlined below:

• Renewable and low-carbon hydrogen is crucial for meeting the Paris Agreement goals to decarbonize
hard-to-abate sectors. To meet the targets, hydrogen would need to meet around 15 per cent of world
energy demand by mid-century.

• DNV forecast that global hydrogen uptake is very low and late relative to Paris Agreement
requirements  reaching 0.5% of the global final energy mix in 2030 and 5 per cent in 2050, although the
share of hydrogen in the energy mix of some world regions will be double these percentages.

• Global spending on producing hydrogen for energy purposes from now until 2050 will be USD 6.8trn,
with an additional USD 180bn spent on hydrogen pipelines and USD 530bn on building and operating
ammonia terminals.

• Grid-based electrolysis costs will decrease significantly towards 2050 averaging around 1.5 USD/kg by then, a level that in certain regions also will be matched by green hydrogen from dedicated
renewable electrolysis, and by blue hydrogen. The global average for blue hydrogen will fall from
USD 2.5 in 2030 to USD 2.2/kg in 2050. In regions like the US with access to cheap gas, costs are
already USD 2/kg. Globally, green hydrogen will reach cost parity with blue within the next decade.

• Green hydrogen will increasingly be the cheapest form of production in most regions. By 2050,
72 per cent of hydrogen and derivatives used as energy carriers will be electricity based, and 28% blue
hydrogen from fossil fuels with CCS, down from 34 per cent in 2030. Some regions with cheap natural gas
will have a higher blue hydrogen share.

• Cost considerations will lead to more than 50 per cent of hydrogen pipelines globally being repurposed
from natural gas pipelines, rising to as high as 80 per cent in some regions, as the cost to repurpose
pipelines are expected to be just 10-35 per cent of new construction costs.

• Hydrogen will be transported by pipelines up to medium distances within and between countries,
but almost never between continents. Ammonia is safer and more convenient to transport, e.g.
by ship, and 59 per cent of energy-related ammonia will be traded between regions by 2050.

• Direct use of hydrogen will be dominated by the manufacturing sector, where it replaces coal and
gas in high-temperature processes. These industries, such as iron and steel, are also where the uptake
starts first, in the late 2020s.

• Hydrogen derivatives like ammonia, methanol and e-kerosene will play a key role in decarbonizing
the heavy transport sector (aviation, maritime, and parts of trucking), but uptake only scales in the
late 2030s.

• DNV does not foresee hydrogen uptake in passenger vehicles and only limited uptake in power
generation. Hydrogen for heating of buildings, typically blended with natural gas, has an early uptake in
some regions, but will not scale globally. 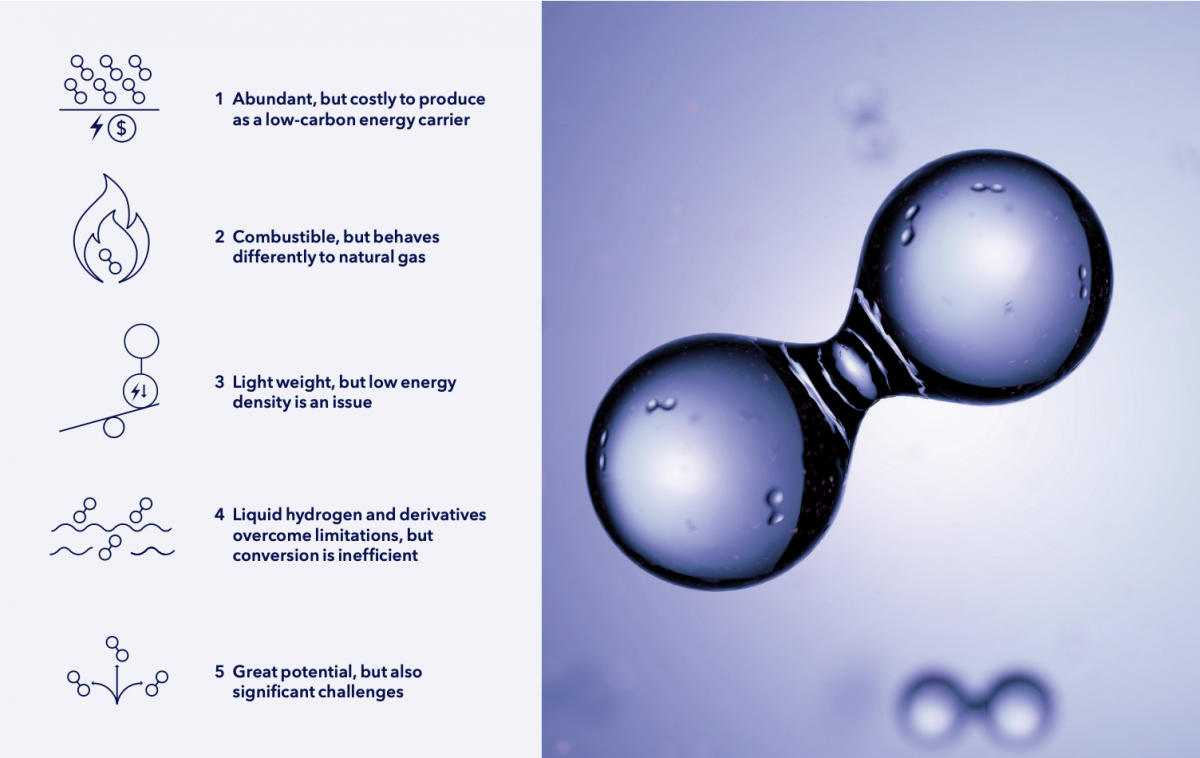 • Hydrogen requires large amounts of either precious renewable energy or extensive carbon capture and storage and should be prioritized for hard-to-abate sectors. Elsewhere, it is inefficient
and expensive compared with the direct use of electricity.

• Unabated fossil-based hydrogen used as an industrial feedstock (non-energy) in fertilizer and
refineries can be replaced by green and blue hydrogen immediately — an important existing source
of demand before fuel switching scales across energy sectors.

• The low and late uptake of hydrogen we foresee suggests that for hydrogen to play its optimal role
in the race for net zero, much stronger policies are needed to scale beyond the present forecast, in
the form of stronger mandates, demand-side measures giving confidence in offtake to producers,
and higher carbon prices.

With several high-profile superyacht projects in development from various shipyards, all using hydrogen, the continued development of an effective structure of class regulations will be vital. The full report, while not superyacht specific, is a fascinating read. The superyacht industry is going to need to fit into a much wider network of infrastructure and regulatory development. This report from DNV reflects that scope. Please contact DNV to receive your copy.