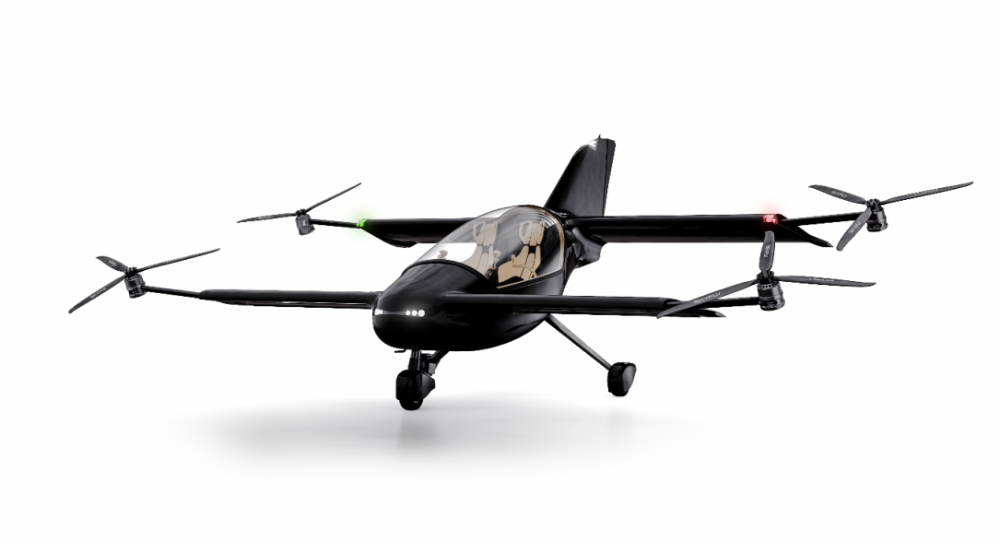 The “Axe by Skyfly” is an aircraft that is capable of vertical flight, but has wings, and uniquely incorporates a design that does not require rotating engines or rotating wings – instead, the motors are at a fixed angle which saves weight while also improving safety and strength. The two pairs of compact wings give the 'Axe' a longer range than its competitors, allow glide landings for greater safety, and even enable energy-saving features. The company behind the concept have also stated their intention to break into the superyacht market.

The Axe EVTOL has a speed of 100 mph, a range of 100 miles and a base price of £ 150,000. It also features an optional range extender that increases to 200 miles by modifying a lightweight rotary engine to feature an electrical charge to the batteries. 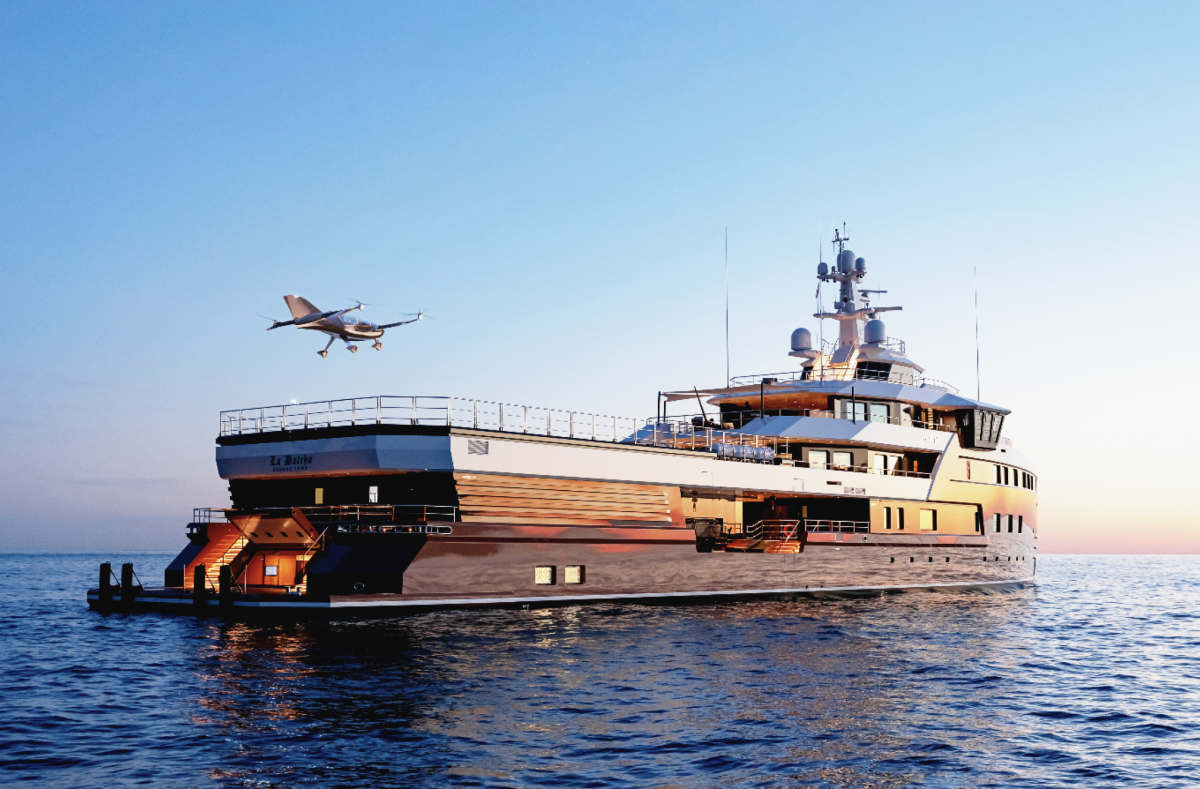 “The design features are unique”, says founder Michael Thompson, who developed the aircraft with aeronautical engineer William Brooks, famous for his designs incorporated over 30 years in 2,500 light aircraft, “It has two sets of short wings, and in that the engines are mounted in a 45-degree angle and do not rotate – rotating engines or rotating wings the competition uses, are heavy, complex, expensive, less safe and require maintenance. The wings allow for lift, giving it range and enabling conventional fixed-wing takeoff, and also giving it the ability to glide at a 10-to-one ratio with mechanical linkage, just in case there would be an engine failure and the redundancy of the 8 engines were to be compromised. There is also a third layer of security with a ballistic parachute. The design is kept simple and very light and robust – because Skyfly believes the only criterium is: kilowatt-hours per passenger mile – using as little energy as possible to cover a passenger for a mile.”

The Axe is a two-seater and does not compete with the more heavily regulated commercial air taxi concepts of its competitors, which Skyfly have identified to be Joby, Archer, Volocopter and Lilium. Instead, it aims for a “bottom-up” approach by falling under various national aviation certification systems as a light aircraft. It is currently in the certification process for the United Kingdom with the Light Aircraft Association which is expected to be completed in 2024 when the aircraft can be delivered to customers – with this certification it can be flown in most countries in Europe and beyond. 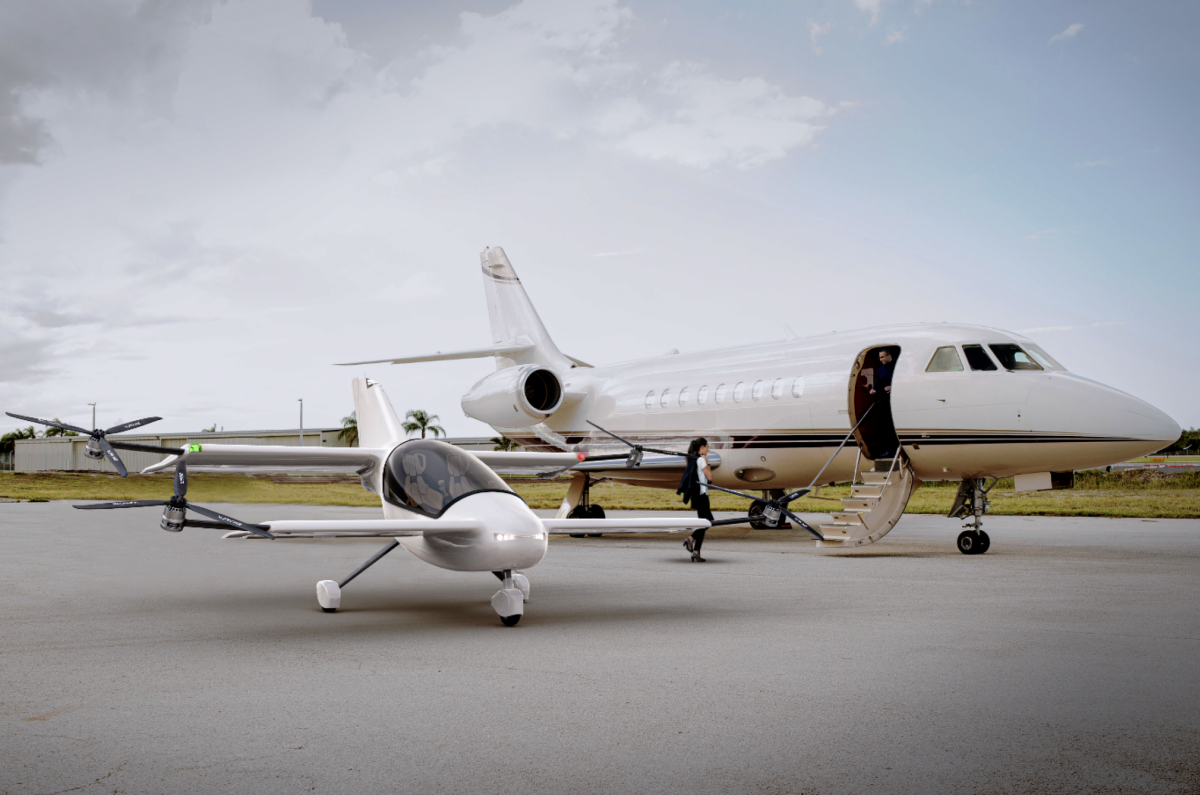 Chief Commercial Officer Jaap Rademaker states, “A unique feature of the Axe is that where the whole market for EVTOL focuses on four to six-seat air taxis, which cost many millions per aircraft and have very complex and long certification processes, the Axe is sold for £ 150,000 plus VAT, the price of a sportscar and as a private aircraft has a simpler certification process. The Axe is your private aircraft, is very easy to fly and hover, allowing you to rise above it all, and get from your home to your weekend home in a quarter of the time a Tesla would take to get there, and you can enjoy beautiful views and not have a traffic jam...

"For decades people have talked about the flying car, the Axe is just that – allowing you to travel faster, greener, safer, and smarter."

One interesting commercial angle of the Axe is that because commercial air taxis will require pilots, and will not be allowed to be autonomous for a decade or so, pilots need to be trained to fly EVTOLs. However, the Axe allows fixed-wing pilots to convert easily to vertical takeoff EVTOLs due to the fact that its wings can take off and land just like a traditional fixed-wing aeroplane.

The components like control systems, batteries and electric engines, come from market leaders such as Geiger and Embention. Options include “Axe, park yourself in your hangar” LIDAR systems and a ‘homing patch’ ensuring a landing on the patch even when a yacht is moving at anchor. Skyfly has also said that they aim to develop a four or more seat aircraft, providing they have success with this model.

Rademaker concluded by saying, “The Axe is aimed at existing pilots and aircraft owners, who will no longer need to spend large amounts renting large hangars next to established aircraft runways, they can keep the Axe at their homes and fly from their front door, and fly direct to their destination rather than an airport nearby their destination which is a huge time and money saver. But we also have interest from in particular two sectors: firstly superyacht manufacturers and owners – as the Axe is so quiet and compact, and has an option to autoland on a “homing patch” attached to the top deck of a yacht at anchor or under sail when a GPS coordinate auto-landing would not be possible, it is a must-have accessory and allows passengers to fly themselves not needing a large noisy helicopter and pilots, to the beach whilst staying dry and comfortable or to be transferred from their private jet to the yacht quickly and with a small eco-footprint. The other interest comes from private jet operators who want to get their clients from their home to the private jet airport as quickly and comfortably as possible.”

The Superyacht Owner Report is Out Now!

Crypto billionaires and superyachts - a relationship doomed from the start?

From Manhattan to Miami