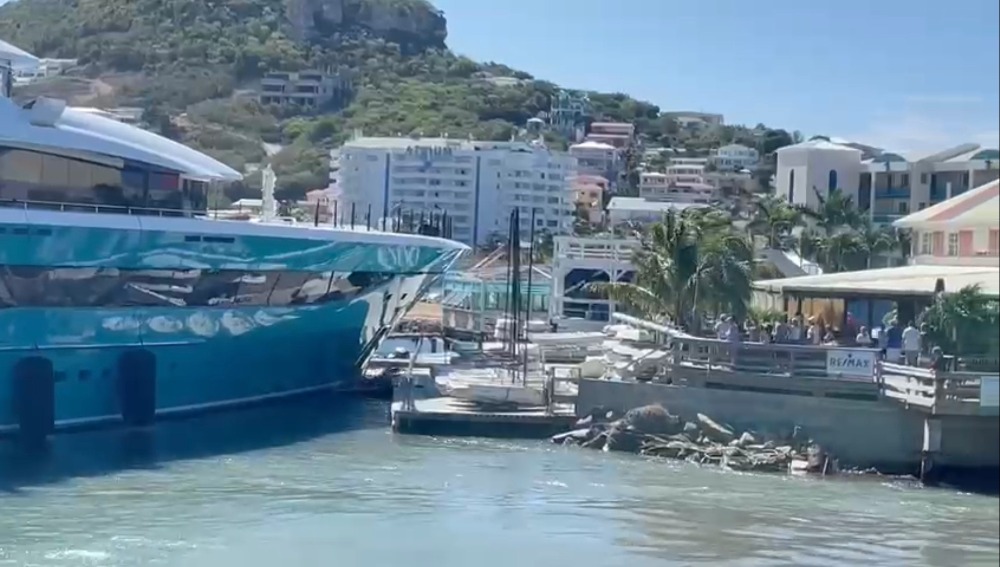 Following the collision of 77m motoryacht Go into a dock in St. Maarten on Wednesday 24 February, 2021, the yacht’s captain has spoken exclusively to The Daily Herald to set the record straight and describe the moments prior to the yacht’s sudden control malfunction during the crucial minutes of the line-up procedure to exit Simpson Bay Lagoon.

According to the report, the yacht’s software failed Captain Simon Johnson at the worst possible moment, leading to his choosing a deliberate impact with the St. Maarten Yacht Club wooden dock to avoid a worse scenario. A second run-in to the dock was then said to be caused by, yet again, a computer miscommunication between the bridge and engine room in a bid to regain control.

“Johnson confirmed that the yacht’s insurance assessors are progressing well in their survey of all the damage sustained to the boat, which is minimal, and the dock, and are engaged to set things right,” The Daily Herald reports. “The root causes of the malfunction have not yet been definitively identified and an intensive investigation is underway while the yacht remains at Ile de Sol Marina.”

Captain Johnson told the newspaper about the moments leading up to the incident; “We left the dock an hour before and went through all the checks. There was nothing different from the other times we’ve done this exit… Then, when we were about 50 metres away and holding position, the yacht started moving mysteriously forward. There was nothing I seemed to be able to do; all the controls on the bridge were showing normal. I called the engine room and everything was normal down there.”

With extremely limited control and the yacht approaching the bridge, Johnson said he had to think fast, deciding that the preferred option was to point the bow towards the yacht club dock and beach her gently there, with a crewmember up front to ensure everyone was out of the way.

Johnson added that he is troubled by the incident; “The fact that there were no warning alarms, no lights on board to indicate something was wrong was really scary. I know this yacht so well, yet I had 13 seconds to make a decision before hitting the bridge. The decision I made was one I would make again if faced with the same circumstances.”

He also criticised modern electronics as getting “ridiculously over the top”, with no manual overrides or back-ups if something goes wrong. “Questions have to be asked in this industry about what’s going on; who is building these boats, who is designing them, who is supervising them, and why we aren’t being asked what we (captains) need to operate them,” he said.

The full interview can be read via The Daily Herald here.

Update: owner of ‘My Song’ seeks compensation for loss of yacht