SuperyachtNews.com - Fleet - This is not a project about nostalgia

This is not a project about nostalgia 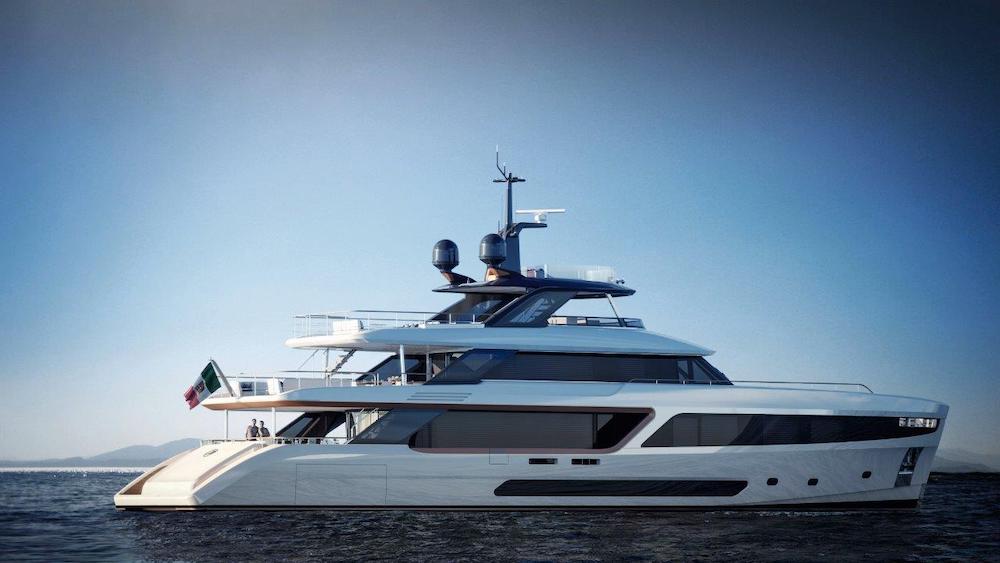 It could be argued that, in recent years, contemporary motoryachts have distanced themselves from their nautical heritage as they have been increasingly influenced by modern, land-based design. To reconnect with yachting heritage, Benetti’s Motopanfilo borrows design features from across nautical history and the ocean itself in order to return buyers to a sense of nautical well-being that is increasingly rare within contemporary yacht design.

“We love the design concepts from the 1960s, but this project was never intended to be retro-chic,” starts Federico Lantero, Benetti’s product marketing and communication director. “When people think of retro-chic, they think of products like the Mini, where the designers have done a fantastic job of creating retro-modern style. However, the development of Benetti’s Motopanfilo was never meant to mirror the ethos of the Mini, we wanted to do something completely different. We searched for some distinctive DNA, elements that we called ‘memories of classic design’, that characterised the 1960s motopanfilos. But, at the same time, we focused on the expectations of today’s clients and how they have evolved over 50 years.”

The word 'Motopanfilo' was coined in the early 1960s to denote the various large motoryachts that became synonymous with the glamour associated with the yachting lifestyle of the French and Italian Rivieras. Benetti itself was one of the first shipyards to produce these kinds of yachts with models like the Deflino, Gabbiano and Mediterraneano. 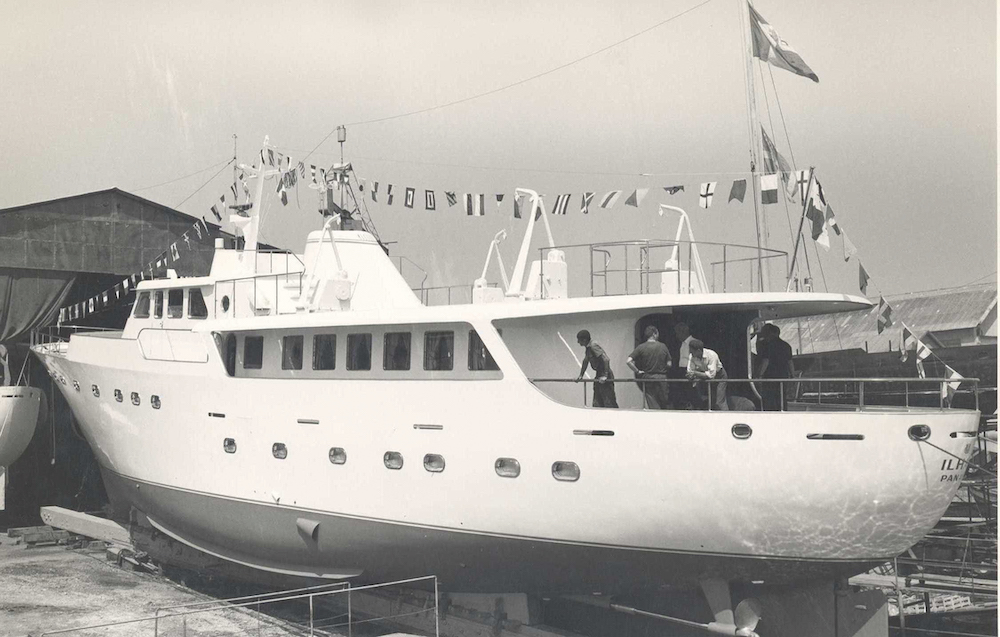 There is always, however, a risk when using the name of, and borrowing design elements from, a series of much-loved classic products like the Motopanfilo vessels of the 1960s that the intention of the project will be lost on the market and the end consumer. For this reason, Benetti has been forthright in its determination that its new Motopanfilo has nothing to do with resurrection, nostalgia or cliché. Rather than directly echoing the design of the original, Benetti hopes to return the eventual owner of its Motopanfilo to a nautical sense of being that has, perhaps, been lost in many superyacht designs today. As Carl Pickering, co-founder of Lazzarini Pickering Architetti, explains, “The first idea was that we wanted to create a boat and not a house.”

Where the majority of buyers and charter guests are concerned, inescapable requirements exist within the world of contemporary superyacht design that would render any attempt to resurrect the past in a too direct manner impractical for the manufacturer. For a start, and as evidenced by every press release from a shipyard or design studio over the last five years, it is now simply a given that superyacht interiors should be bathed in natural light, rendering the designs of the 1960s unthinkable for all but the most rarefied buyers. Equally, the requirement to have direct access to the ocean through either a beach club or swimming platform necessitates that the curved sterns of classical superyachts, romantic as they may be, simply do not fit the bill by contemporary standards. Nevertheless, Benetti has managed to subtly transpose some of the DNA from the original motopanfilos in a distinctly modern way. 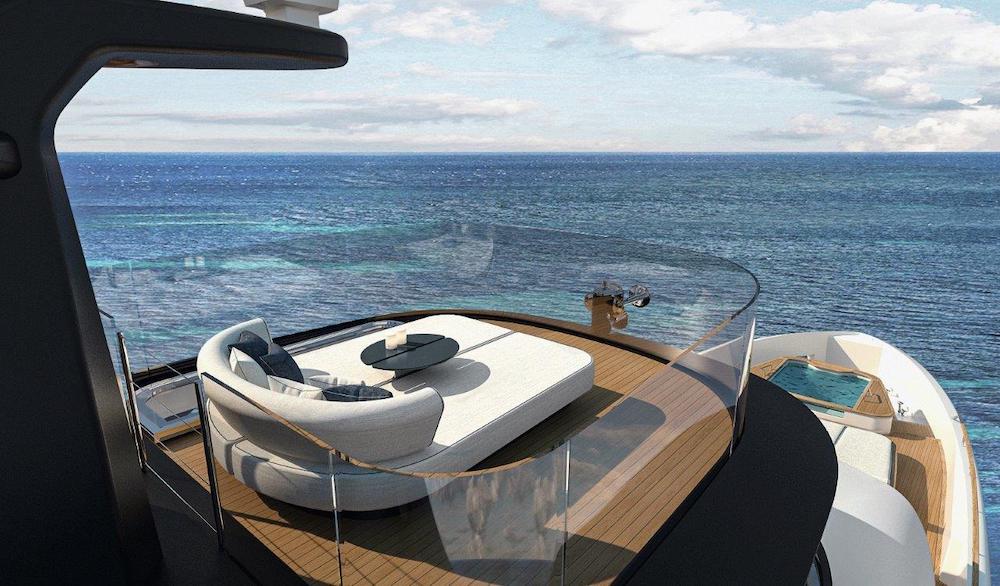 Among the design elements that provide a nod to the 1960s are a midship construction that links the hull and superstructure in a manner that echoes the shell concept of the 1960s. Elsewhere a bronze ‘ribbon’ that runs from the main deck to the upper deck defines the bulwark and provides a sense of the wooden cap rails that one might expect to see on a classic vessel. Furthermore, the addition of an intimate observation deck to a 37m motoryacht is unique and while it is not a feature associated with the 1960s it evokes memories of more distant nautical history with the inclusion of a crow’s nest-like feature. For a full description of the Motopanfilo's design story, watch the video below.

“The task of interpreting the concept of Motopanfilo and those images of the 1960s Benettis was a fantastic task to be offered,” continues Pickering. “Our work is always about finding a primary idea that will define and become the project. In recent years apartments and buildings have heavily influenced the interior design of yachts. For this project, we really wanted to celebrate everything that we loved about being on the sea and we wanted to give architectural form to that idea.” 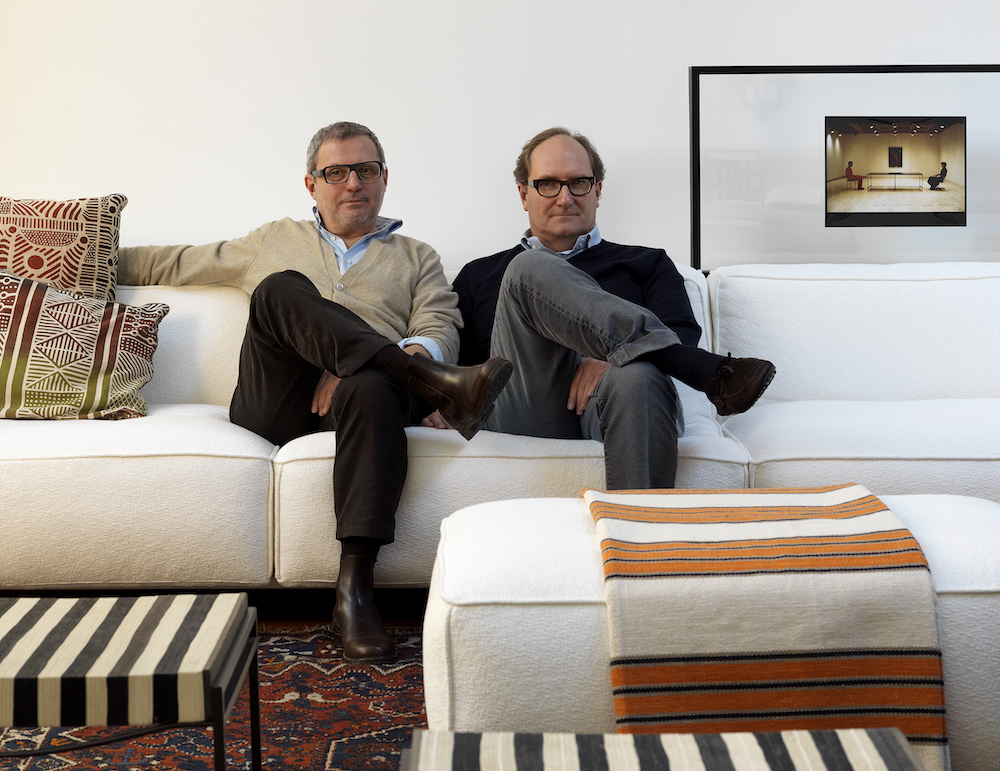 In order to achieve this celebration, the team at Lazzarini Pickering came up with the concept that the interior of the vessel was like the ribcage of a large whale, with this framework providing rhythm to the various spaces. From here, the idea evolved to delineate the various spaces through an architectural approach that reimagines the traditional beams as structural rib bones. The rib bone approach enabled the team to dematerialise the walls, give order and sense to the interiors, defining the different zones and providing punctuation points to mark the use of different materials and allowing for interesting décor and functional interpretations for a variety of systems. 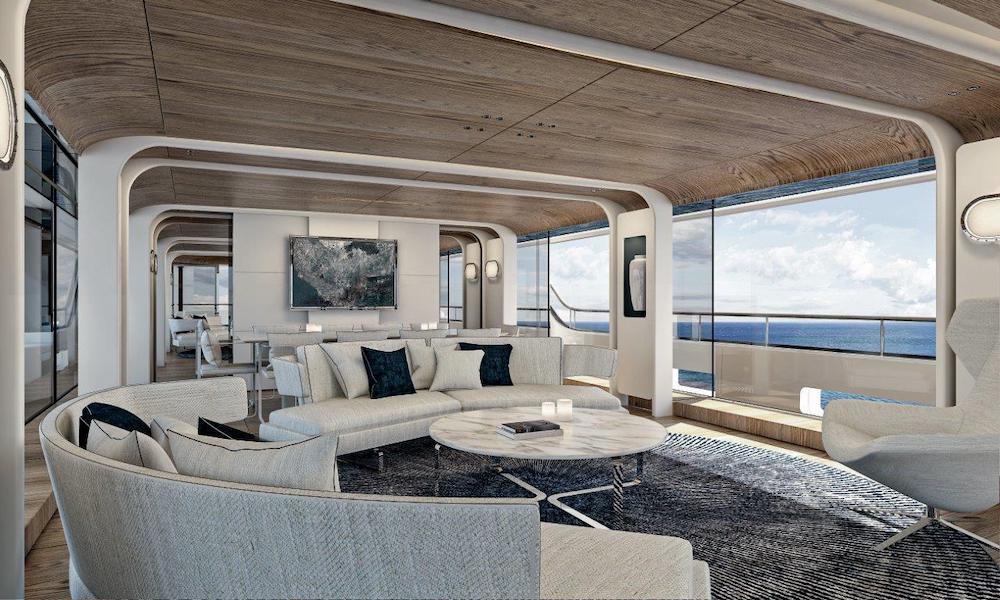 The rib bone concept adds rhythm to the interior

In place of the traditional wooden walls, large panes of glass have been used to amplify the sense of space. The wooden elements of a traditional motoryacht, however, have not been overlooked, although instead of mahogany the vessel uses a warm, light oat colour on both the floors and gently curved ceilings. Punctuations of white and blue woods provide another subtle seafaring note.

“Not only have we reduced the shell to the bare elements and increased the sense of transparency, but we are also integrating the exterior elements with the interior spaces,” explains Pickering. “We have always found main decks to be funny spaces because one tends to use the upper deck on a boat for a variety of reasons. The advantage of the main deck on the Motopanfilo is that it is six steps from the beach club, so the rapport between the two spaces feels incredibly complete. The aft deck and the main deck saloon are really an extension of the beach club. With this in mind, we would go so far as to recommend that the owners use outdoor materials within the main deck saloon, there are some fantastic outdoor velvets and fabrics one can use. Going even further, one might choose not to set the temperature to a pneumonia-inducing 16-18 degrees in that space, choosing rather to go for something more temperate that enhances the continuity between the exterior and interior.”

It could be argued that generally speaking contemporary superyachts have moved too far away from their nautical routes and from the ocean itself. By borrowing design notes from the 1960s, as well as looking beyond to nautical history and elements of marine life, Benetti’s Motopanfilo is not an attempt to trade on the successes of its past, rather it is an attempt to return clients to a sense of nautical ease that has perhaps been overlooked at times in recent years. This is not a project about nostalgia, it is a project about nautical well-being.

One to One: Justin Olesinski