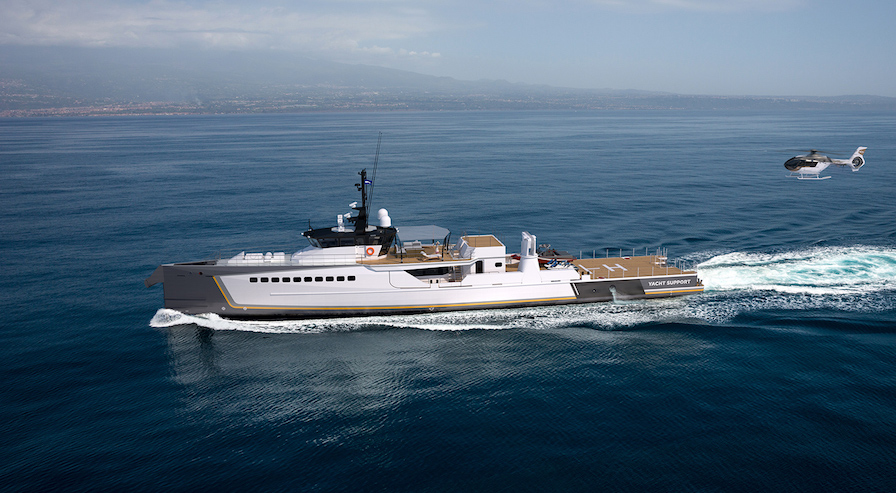 While support vessels have been around for a number of years now, it was not until the last decade that they really began to take off. Central to the growing popularity of this burgeoning market is that no matter how large a superyacht is, there is always an element of compromise ingrained in its build. We speak with two of the industry’s premier support vessel manufacturers, as well as the owner’s representative of Project Phi, about exactly what makes the support vessel market so appealing to the contemporary superyacht owner.

“Back in 2007 we were approached by a fleet management company called Blue Ocean. The owner of an array of superyachts was looking for a practical solution to logistics and supply for his various vessels,” starts Victor Caminada, Damen Yachting’s marketing manager. “They had picked up on the Damen Fast Cruise Supplier, which is a vessel that was developed specially for the offshore and coast guard industries, it has exceptional performance, speed and seaworthiness. In 2009 we delivered our two first Yacht Support vessels that were based on this platform, Oberon (now Ad-Vantage) and Umbra. We actually joined the support vessel market by chance, but once we had delivered the first two projects we saw the potential of this sector because we can deliver these boats at an incredibly competitive cost because we have built the platforms in such high numbers, over 200 already.”

"...once we had delivered the first two projects we saw the potential of this sector..."

Yachting entered the sector, a company called Shadow Marine was converting retired offshore supply vessels into superyacht support vessels. Indeed, it was Shadow Marine’s involvement in this sector that led to support vessels being known as ‘shadow vessels’. The big problem from Damen Yachting’s perspective, however, is that an effective support vessel should not be shadowing anything.

“The issue with these vessels is that they have incredibly low speed and can only travel at eight to 10 knots. Considering that the average superyacht travels between 12 and 15 knots, the problem is that the supporting vessel will be lagging behind,” explains Caminada. “This is the exact reason that our Yacht Support vessels can travel at 20-22 knots. The massive differentiator between our purpose-built products and commercially available conversions is that ours are far more agile and able to support the mothership. Following the success of the two first projects, we took a scale model to Monaco to introduce the 50m concept to the market. We met an owner of a large Lu¨rssen who liked the concept but needed much more space. So, we went home with his shopping list and the result of that collaboration is Garçon. This was a fantastic step for the whole market. She was the first purpose-built, purpose-designed support vessel that we called Yacht Support and, like Shadow Marine before us, Yacht Support became synonymous with this market segment, a household name.”

Broadly speaking, support vessels have been designed to help owners get more out of their superyacht experience. One could argue that, in the past, the superyacht market, as grand as it may be, was woefully lacking in options. Seemingly, no matter how large the mothership, every build has been characterised by an element of compromise. The development of purpose-built support vessels has done much to mitigate the need for the compromise. Whether it be the ability to carry more toys, reducing the time required to set up tenders and toys for the day, the ability to anchor and berth in the most attractive spots, creating more deck space or enabling crew on board the mothership to focus solely on the guests rather than being distracted by other tasks, support vessels have introduced a level of flexibility and freedom that was previously unavailable to the yachting market – as silly as that may sound.

"There is a general misunderstanding that support vessels are only required for the very largest superyachts."

“The development of support vessels at Lynx was driven by the owner and president of the shipyard, Slim Boruchia,” says Filippo Rossi, sales and marketing manager at Lynx Yachts. “However, we are focused on a very specific size range between 24 and 35m. There is a general misunderstanding that support vessels are only required for the very largest superyachts, but they are also an attractive proposition for owners with motherships that are 30-40m.

“First of all, we are generally seeing a trend of owners downsizing. If for instance, you go from a 30m project to a 55m project you are going to need significantly more crew and you will no longer be able to berth in the most desirable spots in Porto Fino, St Tropez or any of the world’s other premium superyacht destinations. There are plenty of reasons why owners don’t want to grow in terms of vessel size, but that doesn’t mean that the desire for a more expansive and flexible superyacht experience is diminished.” 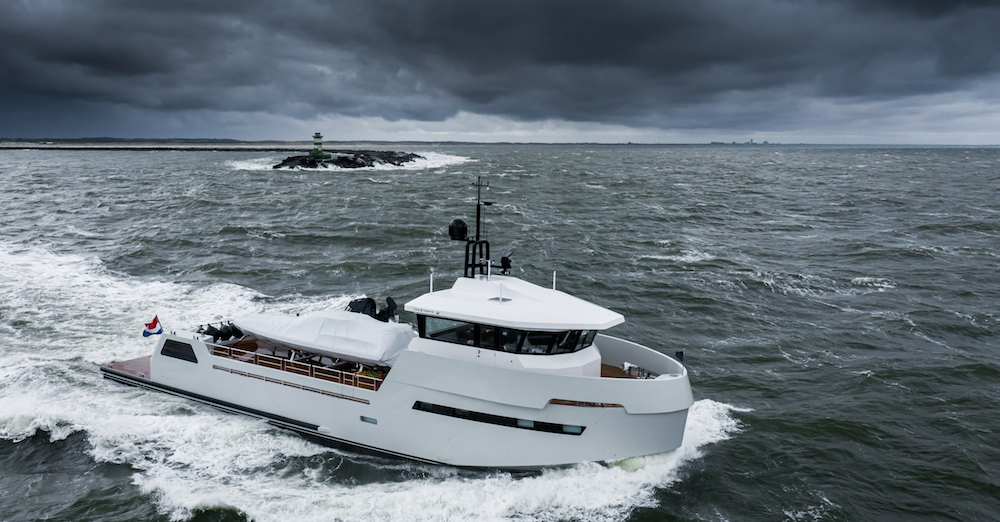 Much of the support vessel market’s credibility is based on the notion that, even for the world’s ultra-wealthy individuals, the only commodity that is not for sale is time. Whether you have a 30m or a 100m vessel, there will be elements of the vessel’s operation that could be optimised if it weren’t for having every single piece of equipment on board the mothership itself. Yes, there still exists an element of ego within the superyacht industry that compels certain individuals to build the world’s largest projects. Nevertheless, even these owners are coming round to the idea that their onboard experience can be optimised with the use of a support vessel.

With tenders and toys housed on board the mothership, operational flexibility is compromised by dint of the fact the vessel will have to always arrive earlier than needed to any destination at which it wishes to unload and enjoy for the day. Significant amounts of crew time will be wasted on tenders and toys, and safety is arguably compromised for any owners and guests, especially children, who are around the loading equipment when it is being used.

“We spent a lot of time and discussion with both Damen and Lynx before we designed our own support vessel, which is being built at Alia Yachts in Turkey,” explains Guy Booth, owner’s representative for Project Phi, which sees a 55m-plus mothership being built at Royal Huisman in conjunction with a support vessel being built in Turkey. “What we tried to do was take the best elements of the Damen product and combine it with elements of Lynx’s philosophy around marina lifestyle. There are size limits all around the world and you have more options the smaller you are.”

Like the motherships themselves, there is no one-size-fits-all support vessel concept or product available on the market. Project Phi’s support vessel, for example, has no space on board for additional guests nor does it have a luxury viewing lounge. Her make-up has been designed to complement the mothership, not replace her, as has been the case with certain support vessel projects.

"Like the motherships themselves, there is no one-size-fits-all support vessel concept or product available..."

“We carry 12 guests on the mothership, but have provided additional accommodation on board the support vessel for crew and supernumeraries should we need them,” continues Booth. “Speed was key for us. The main motivation for having a support vessel is to carry a lot more stuff no matter where you go, but everything needs to be ready for the guests before they arrive at any given location. If Project Phi was to carry the amount of gear that the support vessel is expected to, she would be around 90m. When you start looking at the costs for building and operating a 90m vessel rather than a 50m, they grow exponentially. Having a mothership and a support vessel is not only more efficient in terms of operations, but it is also actually more cost-efficient, not to mention adding a great deal of value to the experience. The costs, no matter how you look at it, are much more attractive with a support vessel.”

Booth explains that one of the major compromises that is less discussed but typically found on board standalone superyacht projects is the level of service offered by the on-board crew. With so many different tenders, toys and systems requiring their attention, it is not unheard of for owners and guests to have to wait until the crew has finished with certain duties before returning their full attention to the needs of the guests. The development of the Project Phi support vessel allows the guests to benefit from the full attention of the onboard staff at all times, while the other crewmembers on board the support vessel are free to dedicate their time to the operation of the various toys.

“For us, another one of our key goals for Phi at around 55m was to keep her under 500gt. Upon delivery she will be the world’s longest sub-500gt superyacht,” continues Booth. “Five hundred is the magic number when it comes to regulatory compliance and the on-going life of the vessel. Above 500gt the costs get incrementally larger. However, because we have no tenders and toys on board, the guest spaces feel like they do on a far larger yacht.”

While the three support vessel models discussed herein are more distinct than they are similar, there are two key characteristics that tie them all together. Whether an owner chooses to build with Damen, Lynx or Alia, or indeed the various other legitimate support vessel manufacturers, they are building with a desire to increase flexibility and bolster their superyacht experience, no matter what form that experience takes. For too long the superyacht has been seen as an end in itself. Indeed, for many years the superyacht market came across as almost arrogant when one observed the various marketing materials and messages that were on offer. What the growth of the support vessel shows us is that the superyachts are not in fact the final goal. Superyachts are merely luxurious tools that allow owners and guests to experience that which they truly enjoy. The addition of a support vessel does not change this message, but it allows owners to be more flexible and efficient in how they approach it.

This is an article originally published in issue 202 of The Superyacht Report. To access the full library, please click here.