Data that has been provided by The Superyacht Agency shows that 10 units over 30m have been sold between the 11-25 of February. The total LOA of sales as well as the average value of the yachts sold have all increased since our last brokerage update a fortnight ago.

The total sale of superyachts over 30m in LOA since the start of 2022 has now surpassed half a billion (€580m). There has been a total of 43 superyachts sold since the 1st of Januray and ten of those have landed between 11-25 of February. What's more is that the same time period accounts for 30% of the sales value in the brokerage sector for the year so far.

The highest-grossing sale and also the largest yacht sold was the 2013 VSY-built Stella Maris, which has a last known asking price of €75m and LOA(m) of 72.1m. The yacht features a striking exterior profiling by famous designer Espen Øeino. Without the sale of Stella Maris the bi-weekly analysis of the brokerage market would show a relatively stark fall in the market activity. Royal Falcon One, the 41.4m Kockums delivered in 2019, had the highest price reduction at €4m. 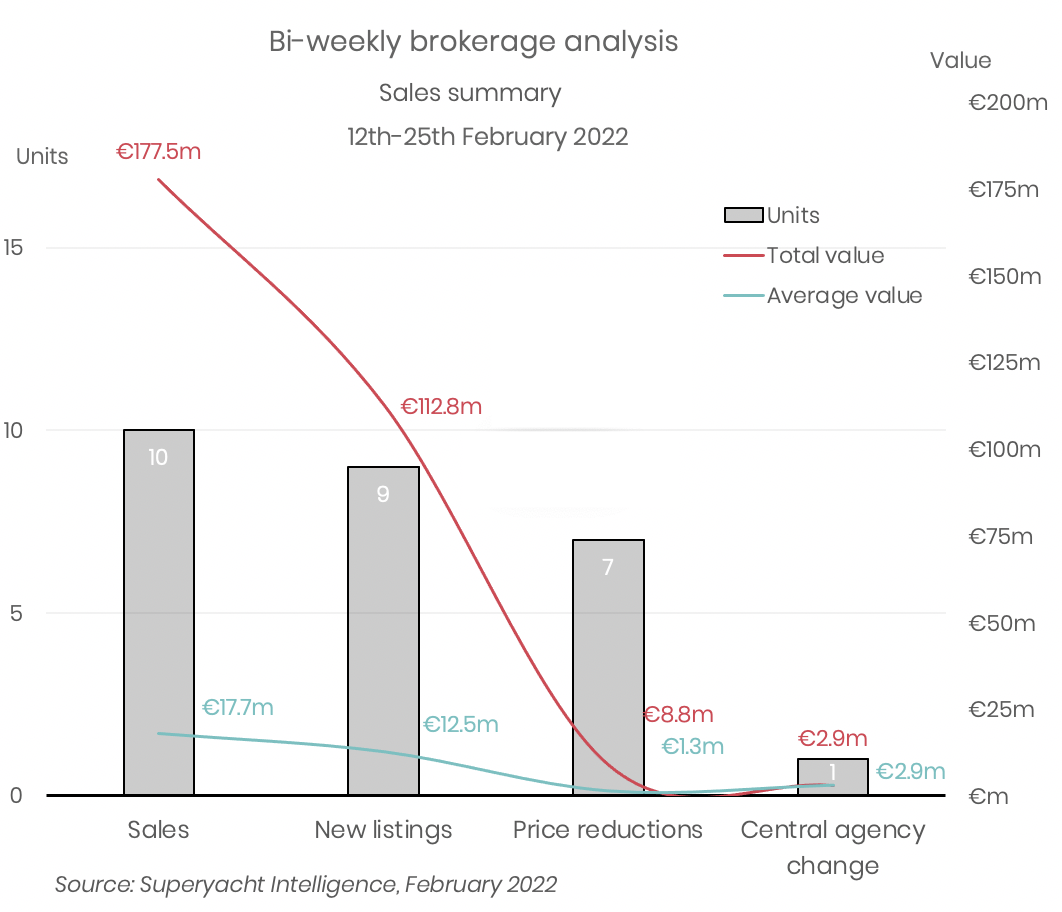 While the graph shows the market is gaining speed and momentum, it should also be noted that the striking percentage increases are so high largely because of the fact that there is such a small sample size at play.

The graph below reveals all the movements within the brokerage market for the period analysed for boats below 70m in length. For reference, the red dots represent sales, blue new listings, grey price reductions, and salmon pink new central agencies, with the size of each point representing estimated value. Stella Maris was removed from the graph to ensure the bulk of the market was visible, such was the difference in value between this sale and the other market movers for this period.

The data provided within this article is just a snapshot of the data curated and available to The Superyacht Agency through its intelligence and consultancy offerings. By breaking down the data into more nuanced metrics and overlaying it with independent data sets, all of a sudden the market can be viewed in a much more colourful and detailed manner, enabling data to become intelligent and inform business-critical decisions. To find out more about how The Superyacht Agency can help your business, click here.

Where only superlatives count