Sessions from the red room at The Superyacht Forum

After Red Ensign Group’s session, Carlo Vinelli speaks about the evolution of the REG code…

Last month The Superyacht Forum was bustling with intriguing ideas from yachting professionals. The brainstorming sessions witnessed lively debates where delegates put forward their queries to professionals from every corner of the superyacht industry. Red Ensign Group’s session: ‘What's new about the REG code’ featured amongst them. The session evolved into a lively debate in which representatives from the various flags gave their candid take on how the code has adapted to changing demands and what could be done to improve its readability.

Cayman Registry Regional Director, Peter Southgate moderated the session, posing queries about whether the regulations should be simplified to make them easier to comprehend. Cayman Registry’s Principal Surveyor, Julian Smith spoke at length about the need to simplify the regulations. How to juggle ‘Goal Based Standards’ whilst avoiding stifling innovation is a concern among regulators of the Red Ensign Group (REG) code and the brainstorming session demonstrated just how cooperative the speakers were when adhering to the needs of professionals from every part of the yacht-building process.

SuperyachtNews spoke to Carlo Vinelli, Senior Surveyor at Isle of Man Ship Registry, who proposed the idea, from his previous experience in the Italian yacht-build market, that a language barrier can, in some cases, hinder the correct adhesion to regulations. Vinelli has a long career in the marine industry. He started out as a naval architect working for private engineering companies in Genoa. He has since worked with designers, shipyards, owners/managers and classification societies. In 2008 Vinelli was employed by RINA as a Marine Surveyor & Advisor. Vinelli subsequently became a surveyor for Red Ensign Group. When the REG code entered into force Vinelli joined Julian Smith at a Royal Institution of Naval Architects during an event in Italy to explain the differences. 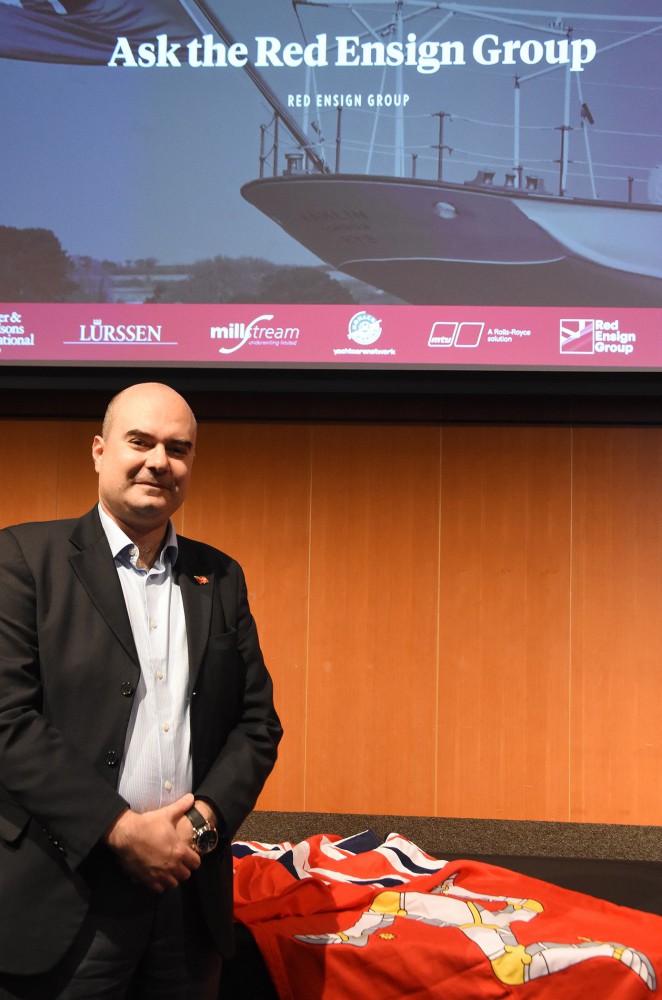 Carlo Vinelli in the red room at The Superyacht Forum 2022

Vinelli explains that the REG code, which used to be known as the Large Yacht Code, has gone through various editions since 1997 (LY1/2/3 until REG Code in 2019) with the aim to meet the evolution of the industry and the updates of international regulation. Recognised by the International Maritime Organization (IMO) as an alternative to the Safety of Life and Sea (SOLAS) regulations, the REG code should provide an equivalent standard. Vinelli elaborates: ‘Accordingly, new IMO regulations entering into force may affect the Code, hence why the need for the continuous update for new buildings and, in some cases, even retrospective requirements for existing yachts.’ 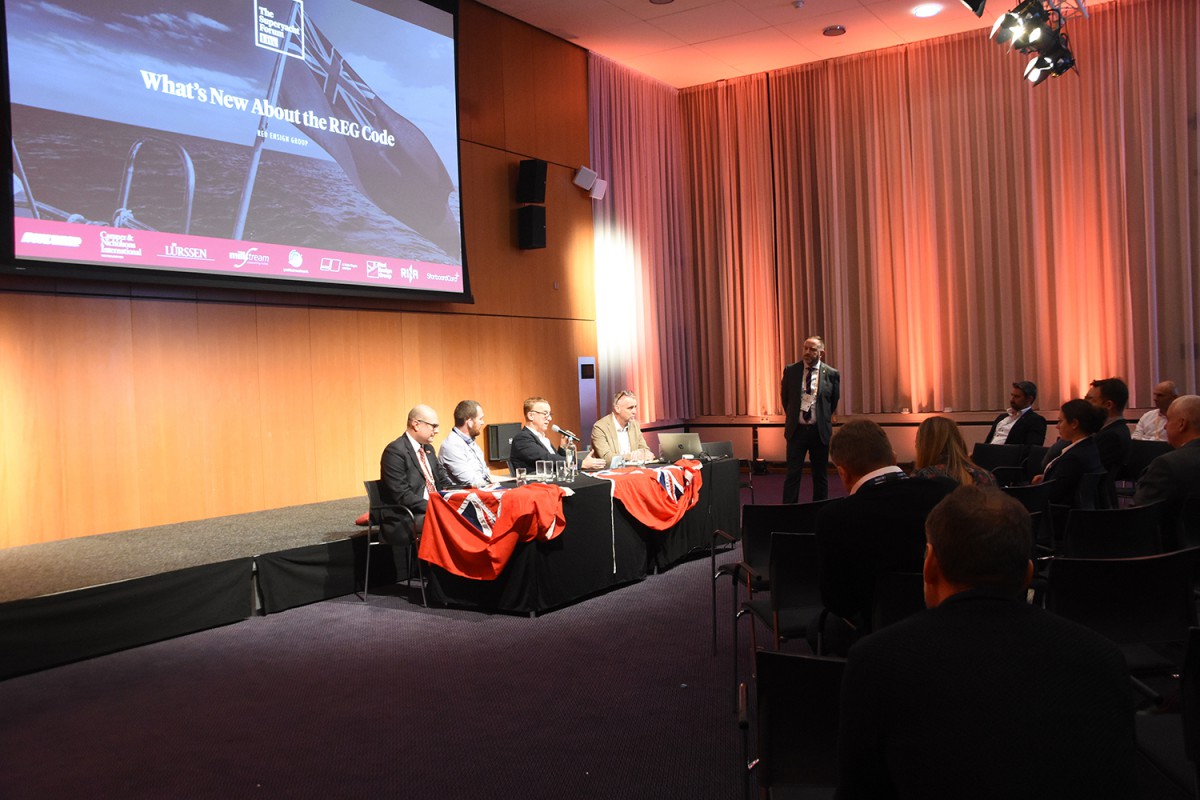 The Red Ensign Group's brainstorm session at The Superyacht Forum 2022

25 years on from its inception, the REG Code has had to adapt to changing demands in the industry including new technologies for which IMO has lacked regulations to govern. The increased complexity of the code seems to have sprung from the increased complexity of what a yacht, with its corresponding toys, entails. Additionally, Vinelli cites the improvement of the code as a result of a reaction to new demands to improve conditions as well as the need to bend to the changing times: these include “the environmental requirements, crew well-being, new technologies available like lithium batteries”. Vinelli points out that “25 years ago we didn't have electric jet skis or electric tenders”.

The 2019 REG Code in particular aims to give room for more flexibility and innovation in the design and construction of Large Yachts by setting standards for AD&A’s (Alternative Design & Arrangements), which may be used in conjunction with “Goal Based Standards” or “Risk Based Certification” whenever no official standard is applicable yet (e.g. hybrid methanol propulsion systems).

Vinelli argued that building a yacht has become increasingly challenging due to the changing demands of regulations: ‘Safety and environmental aspects have been subject to more and more demanding international requirements, as well as crew welfare, with the introduction of MLC requirements for example. As a matter of fact, changes are inevitable and we, as regulators, have the task to support the fulfilment of technological progress, providing regulations as clear as possible despite the increasing number of requirements.’

Vinelli explains that the increase in the complexity of regulatory aspects of yacht buildings is partly due to the requirements and partly to the intention of giving more precise instructions to the industry: ‘I think that we have to cover as many aspects as possible but at the same time to provide clear summaries of what are the basic requirements. We have to consider that building schedules are very tight and people involved want to read it quickly, finding easily the specific information they are looking for.’ He says ‘when regulators write a new requirement, they have clearly in mind what they are talking about, however, from another side the same sentence could be subject to a different interpretation.’

Vinelli speaks from personal experience when describing the issue of interpreting the REG code when an added cultural and linguistic barrier is layered on top: ‘I have seen this happening quite often in the past in Italy, where most often there wasn’t any native speaker to ask for clarifications.’ Vinelli highlights the fact that the level of English in Italian companies has improved dramatically. However, he stresses the need to realise the danger of lexical misunderstandings: ‘Such misunderstandings may spread and become usual in some areas where there is not so much interaction with the global industry and they may lead to shortcuts reducing the standard we had in mind, as well as to different conditions for the various competitors. Maintaining a level playing field is a top priority for our industry.’

In Vinelli’s experience, regulators and builders have the same targets to improve the industry. Vinelli stated: ‘regulators are mostly technicians with a strong academic background and we generally look forward to a long time plan, thinking ahead of time about new requirements to enter into force in the next years. In the private industry, they also look at long terms plans, but the priority is still the completion of current projects under the applicable rules and the approach tends to be more pragmatic to help production departments and satisfy last-minute requests from clients.’

Alternative ideas from The Superyacht Forum

All eyes on us