SuperyachtNews.com - Business - Are we finally realising that Eastern Promise?

Are we finally realising that Eastern Promise?

Adriatic42’s new specialist yard, only a few day's sail from the Suez Canal, creates a unique cruising and refit cycle …

Since its inception, Porto Montenegro has developed into one of the most intriguing superyacht destinations. The Adriatic and Eastern Mediterranean have subsequently cemented themselves in the yachting calendar as a less travelled and, therefore, more rewarding cruising ground, with Porto Montenegro offering a high-standard marina and over-wintering option.

The missing piece to the infrastructure puzzle was a refit facility that could complement the cruising and berthing capabilities. After many years of development, Adriatic42 – a joint venture company between PM Holdings LLC, an Investment Corporation of Dubai (ICD) company, and Drydocks World Dubai, a DP World company – has officially been launched.

The announcement marks the beginning of significantly enhanced operations at the facility in Bijela, Herceg Novi, Montenegro. Black Pearl, the world’s largest sailing yacht, became the first boat to dock in Adriatic42’s superyacht yard for its ongoing refit.

The government of Montenegro granted a 30-year concession for the former Bijela shipyard, located in one of the safest natural harbours in the world, and under Adriatic42’s stewardship, the shipyard is undergoing a comprehensive redesign, transforming it into a premium superyacht refit and maintenance facility.

The launch, in late October, was attended by the President of Montenegro, Milo Đukanović; Mohammed Ibrahim Al Shaibani, managing director of ICD; Sultan Ahmed Bin Sulayem, group chairman and CEO of DP World; Captain Rado Antolović, CEO of Drydocks World and Chairman of Adriatic42, as well as numerous other dignitaries.

The most iconic long-term resident has undoubtedly been Black Pearl. The 107-metre sailing yacht from Oceanco, launched in 2016, is a common sight on the Montenegro coastline. It was fitting, then, that Black Pearl was the first yacht to grace Adriatic42’s floating drydock for the official opening of the facility. 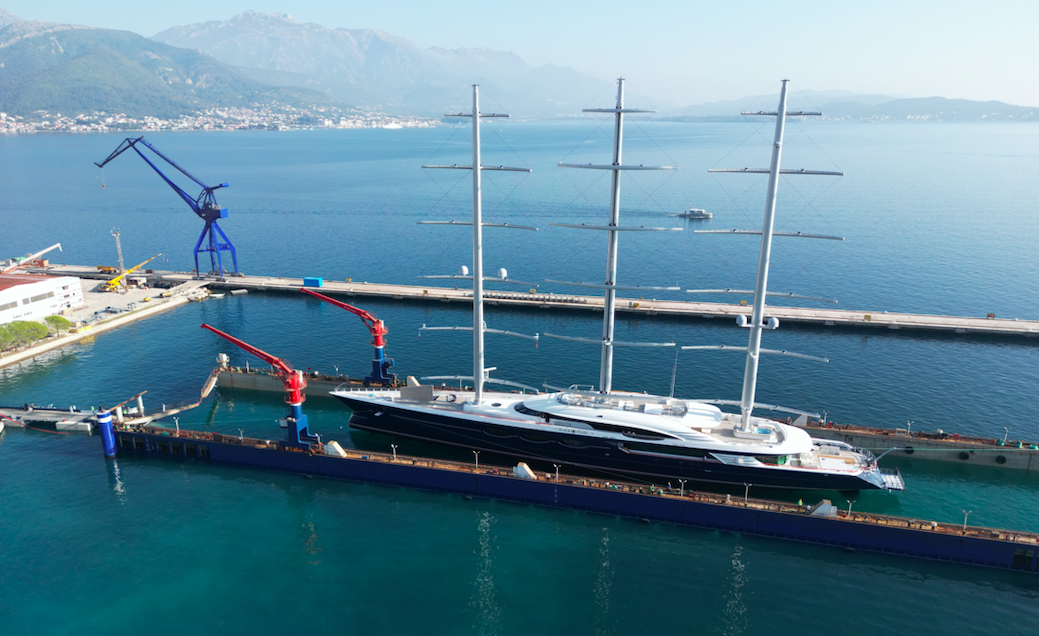 Derek Munro, director at Divergent Yachting and chairperson of Superyacht Charities, is the build and yacht manager for this fleet icon. “The majority of the shipyards in the Eastern Mediterranean are commercial yards that will try to adapt and accommodate a yacht,” says Munro. “What I see at Adriatic42 is a superyacht-specific facility. We have managed refits worldwide, and Black Pearl is difficult to accommodate. With its draft, air draft and DynaRigs are very specific. The fact that they have got it into the floating dock, and it is able to rotate its rigs, is very challenging.”

High winds are a significant consideration for any yachts over-winter- ing, especially when incapacitated during a refit. This issue is amplified by sailing-yacht rigs, none more so than the unique DynaRigs on Black Pearl. 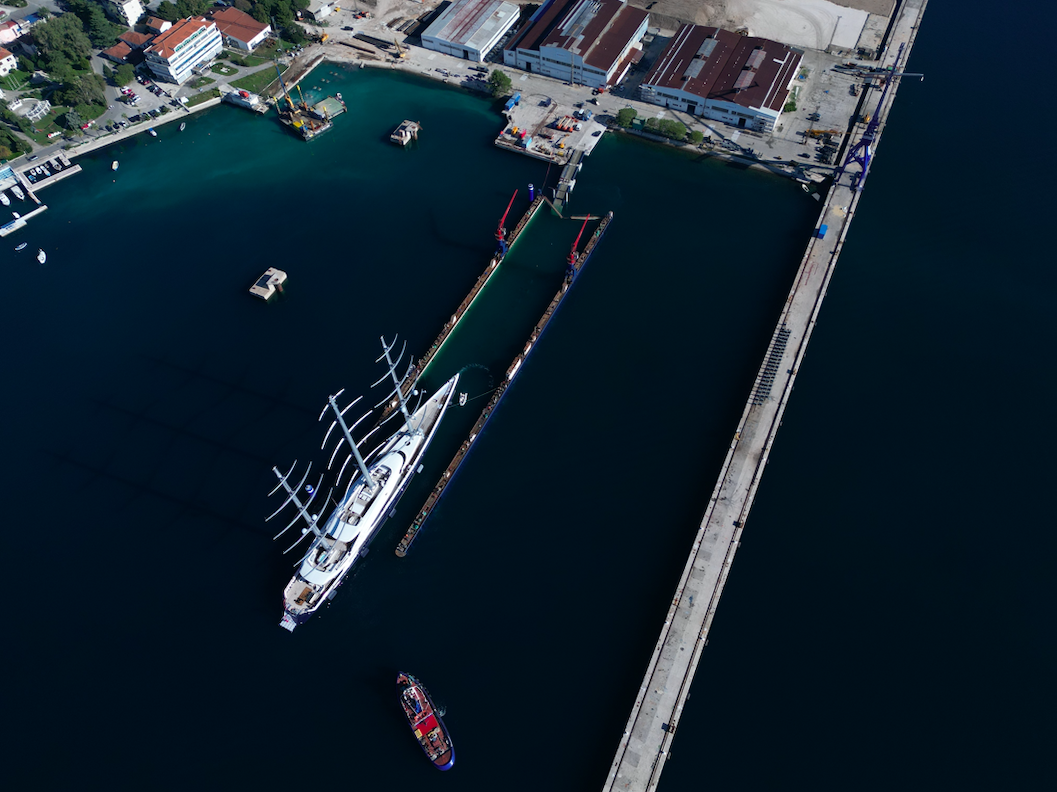 “We have had the engineers from Dry Docks Dubai involved,” adds Munro. “We have sent them all of the drawings and they have made very precise windage and load calculations for gusts up to 75 knots – not only at deck level, but we needed to know the forces acting 80 metres up on the DynaRigs.

“We have been very impressed so far. It is definitely a place that more yachts should look to, not just because it is a beautiful place, but cost-wise it was significantly cheaper for us than the other three quotes we had and, so far, the quality of work has been very good.”

Adriatic42 already employs approximately 100 staff, who bring a long tradition of maritime expertise to the yard. The former Bijela shipyard, which is nearly 100 years old, was the largest ship repair yard in the Southern Adriatic. The new joint venture will aim to extend this maritime heritage. 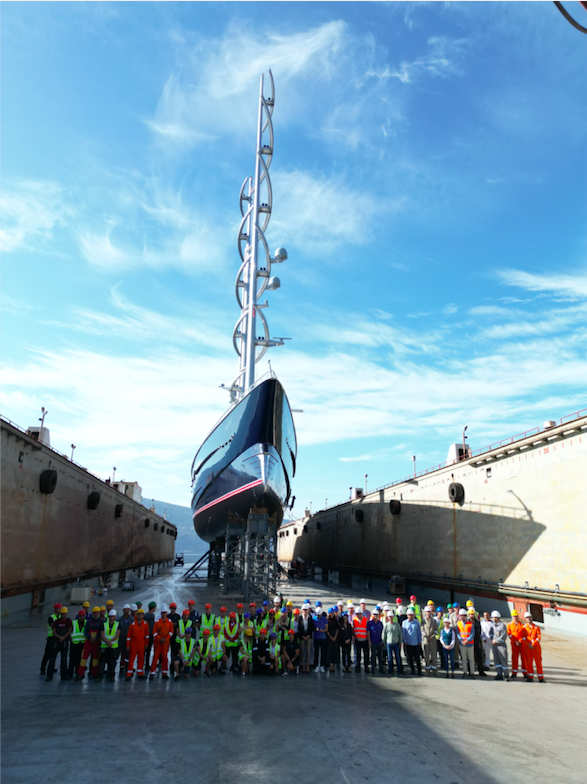 At the official launch, President Đukanović said, “From this day onwards, the launch of Adriatic42 puts Montenegro at the centre of the world’s nautical tourism industry. Adriatic42’s comprehensive facility and service offerings from quality repairs and fabrication, as well as moorings, will allow yacht owners to enjoy Montenegro’s world-class marinas all year round.

"We now have an international standard marina and refurbishment facility in the country, which further positions our nation as a prime tourism destination in Europe and the Mediterranean. Furthermore, Adriatic42 will be a beacon for economic opportunity in the country, culminating in hundreds of jobs thanks to the shipyard, as well as a conduit for specialised small and medium-sized businesses that can support the yachting industry. Adriatic42 represents a massive opportunity for our country, now and in the future.”

Mohammed Al Shaibani added, “The Investment Corporation of Dubai is delighted that the joint venture between its operating business in Montenegro, PM Holdings LLC, and our expert marine engineering partner, Drydocks World Dubai, is being realised through the opening of Adriatic42’s specialist superyacht shipyard.

“Together we’ve shared a long-held ambition to reactivate Montenegro’s former Bijela shipyard in Kotor Bay, and Adriatic42’s new refit and repair facility, with the extraordinary superyacht marina village of Porto Montenegro as its backdrop, will create a unique and unrivalled year-round yachting hub in the Mediterranean. This is just the beginning for Adriatic42’s superyacht services, and we look forward to the employment opportunities and prosperity which they will bring to Montenegro.”

Captain Antolović concluded, “The opening of this unique facility for the refit and maintenance of megayachts marks the beginning of a new era of sustainable and modern shipbuilding globally. It is also a great boon for the maritime and yachting sectors in Monte- negro, with more than €40 million invested in the project to date, including for the acquisition of the state-of-the-art infrastructure and investments in sustainable technologies.”

Significant, if nascent, developments in the Red Sea and Gulf States occupy different levels of feasibility. Now operational, Adriatic42 may become a central hub in a more diversified refit ecosystem. With a shift east, an established specialist yard a few days’ sails from the Suez Canal may untap the potential of a separate yachting cruising and refit cycle removed from the more traditional Western Mediterranean regions.

Porto Montenegro to invest €500 million over next ten years