An unlikely partnership that spurred a British marine innovation… 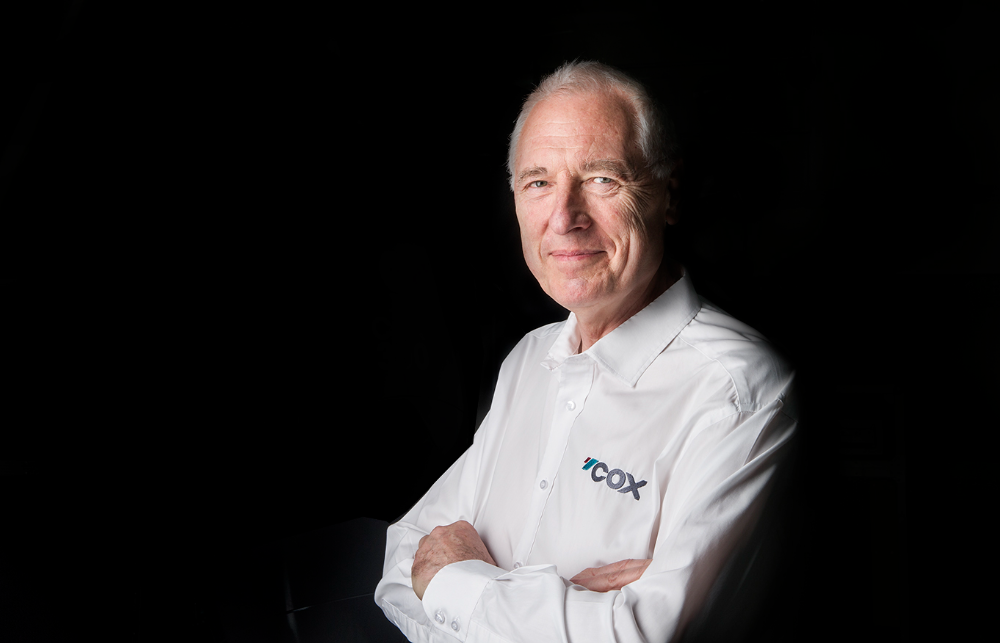 SuperyachtNews speaks with Charles Good, co-founder and chairman of Cox Powertrain. The story of Cox Powertrain, and the inspiration that led to its diesel outboard engine development is an intriguing story of British engineering and cooperation between seemingly unlikely partners. Unfortunately, the untimely death of David Cox disrupted this partnership, but the legacy lives on, and Good's insights provide a fascinating look at engine development.

Speaking from his home in the southwest of the UK, Good takes the story back a few generations when he describes the accident that can be seen as the genesis of the Cox Powertrain diesel outboard. A story that, he explains, is perhaps too long for the company's website. It is, however, one that many of us can relate to: "It goes back to when I was 20 years old, 1966 off a small island in the harbour of Corfu; while I was decanting petrol I managed to spill quite a lot, which caught fire almost immediately because there was a gas-powered fridge close by. Fortunately, I stepped back in time, but the experience stayed with me." The danger of decanting petrol is something that anyone with any experience on the water, leisure or otherwise, is likely to have encountered. Watching the vapour rising on a hot day and the inevitable overflow into the bilges or on the deck is a common experience and one that persists on many superyachts today.

During our conversation, I was forced to admit that I had only vaguely heard of British Seagull, and its iconic outboard, which Good informs me was a near-ubiquitous presence in British marine manufacturing, and boating:

“When I was young, Seagull was like Land Rover. It was everywhere on the water.  But I watched that business fail to innovate and eventually die. It was a great British business and a great British engineering company. As a sort of closet engineer and an engine enthusiast that I found really frustrating.” Recalls Good.

"That observation, coupled with the fire I had experienced when I was a young man, spurred the idea that somebody has got to come up with a diesel outboard because it is nonsense to have very volatile fuel on board," continues Good. As is often sighted, while marinized diesel engines became the industry standard, the performance barrier that arises when converted to fit the demands of outboard performance has hindered application in the superyacht sector. "So, the mission was to try and find a way of building sufficiently lightweight, but also smooth and agreeable diesel engine that you could switch for an equivalent petrol engine more or less without noticing." States Good.

"Historically, some of the professions we let slip in post-war Britain were; aviation, maritime engineering and design, and a host of other engineering skills. We lost a lot of it. But the one thing we didn't lose was engine design, which carried on in Formula One." As Good explains, the Formula One connection led to a fortuitous meeting that spurred the next stage of innovation. "David Cox was Formula One engineer who had come up with a very lightweight idea for a diesel engine, which he was pursuing with military drones in mind for Lockheed-Martin," continues Good, "but he couldn't raise any money; he was spinning his wheels. So I took it down to Ricardo PLC, who were our neighbours, and I asked, what do you make of David (Cox) and what do you make of these designs?"

Good elaborates that while Ricardo PLC liked some of the features, it was not a home run initially. But Good had seen enough to make the first commitment to the engine that Cox Powertrain has subsequently developed, with one caveat:

"I said to David (Cox) that I will invest in you and  get my friends involved, but you're not going to fiddle around with drones anymore because as a business you're going to get killed by Lockheed Martin. You know they're going to kill you. So, we need to own our market." Recounts Good.

"The obvious thing to do was to build a diesel outboard", Good affirms, continuing; "then he (Cox) sadly died a couple of years after we got involved. But we carried on using his idea of using Formula One technology to take the weight out of the engine." Formula One is all about power density, Good explains, but marine diesel engines have a completely different operational profile that must be met. Although not all engineers may admit this, they like to be conservative. And, if, as Good puts it, "you are conservative with every aspect of an engine, you end up with a very expensive and heavy piece of machinery."

Good goes to explain why, with the thousands of existing and increasingly efficient auto and land-based high-performance diesel engines on the market, they didn't simply convert an existing platform: "The duty cycle for an auto engine is very different from how we would use it in the marine sector. So you end up having to de-rate the engine. For example, if you take a 300-horsepower car engine, you're going to have to direct it to 220 horsepower or thereabouts to get anything like a lifetime of use of it." (For the benefit of non-engineers like myself, the duty cycle is the cycle of operation of a machine or other device which operates intermittently rather than continuously.) "And also, you don't own the engine if you use someone else's!" Summarises Good, who continues, "so for those two reasons we made our decision to design and build our own." 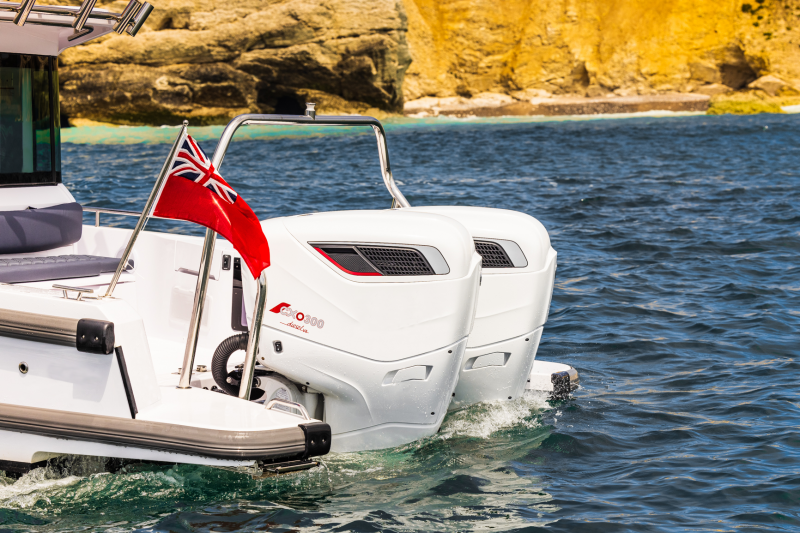 The IMO restrictions around the volume of petrol that can be carried onboard are low, compared to the demands of the superyacht sector. 150 litres is enough for the petrol outboards to have only a couple of days of heavy use, at most, and often involve manual decanting in even the most advanced superyachts. While this side of the market formed part of the Cox Powertrain strategy, Good saw the apparent demand from broader swathes of the marine and military sectors, as he stresses: "We were aware of the single fuel policy at NATO, of course, that was a big spur to us early on because obviously we were backing our judgement rather than having a customer. But it was obvious that NATO countries would-be customers, and they're certainly very interested in what we're doing."

My penultimate question for Good was where, with so much emphasis on the development of the 300hp model, he sees the scalability of the Cox platform? "I'm chairman of the company, and I want to see the company deliver this engine in volume. You're right to ask the question. And of course, we're not pretending we're not thinking about it; of course, we are. So I'm quite happy to say that. We went in at the high end of the market, but it is worth noting that when we started designing this thing five years ago, we chose 300 horsepower because it was right at the top end of one of the best outboards at the time but we are already regularly seeing 400, 450 for the petrol manufacturers, so that may be the next step."

"We don't think there's a lot of volume in that market, summarises Good, "but the marine architects are all wanting to use more technology on bigger hulls. So we definitely do need to, and will, move up the range. There's nothing planned imminently, but that's the drift of the market, and we want to follow it."

Finally, and perhaps most vitally, I asked Good where he saw the application of alternative and emissions-free energy technologies. To which Good also took the conversation back to another paradigm shift in thinking, generations ago: " Having lived through both great smogs in London, and The Clean Air Act of 1956, my physics thesis was actually on the use of hydrogen, possibly as hydrogen fuel cells and their application for inner-city transport.  The research into hydrogen fuel cells looked obvious then because something needed to happen, so why not work on it? But I feel I would be in a dark room somewhere for 45 years of my life and nobody would have been remotely interested. And then suddenly it's become the hottest area!"

"Our policy is to watch it extremely carefully and be ready to adopt early when it's right to do so," concludes Good. "We've done our pioneering work and I like to say now we are into proper innovation, in and around our product group. We don't want to be pioneers in the sense of the explorers who leave early, without a map. That is not a business plan. But we are happy for other people to be doing that. And, we will be adopting very early when it's clear what the right direction is." And, with a hint of a smile, Good adds, that he still sees diesel as the most likely interim solution, for at least the next 30 years.

Fuelling the Future: what makes sense in next-generation power?

The potential of LNG fuel for superyachts