SuperyachtNews.com - Technology - The potential of LNG fuel for superyachts

The potential of LNG fuel for superyachts 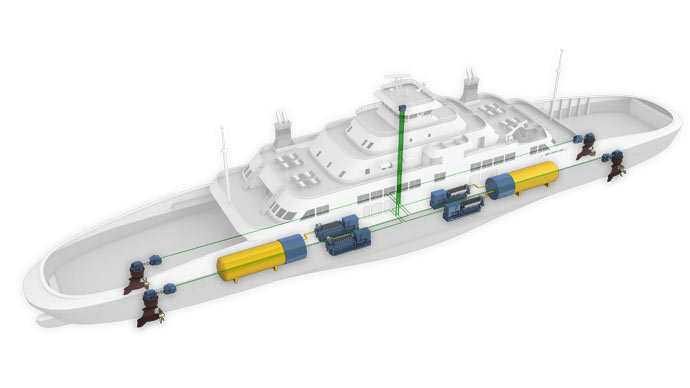 LNG (Liquefied Natural Gas) fuel has clear advantages over diesel for the maritime industry due to its odourless and cleaner emissions and, as such, LNG fuel is increasingly specified for commercial vessels, particularly coastal ferries and cruise ships. Brittany Ferries’ new ship the Salamanca, for example, is billed as the first LNG-powered ferry for the UK market. However, the size of fuel tanks and limited LNG bunkering infrastructure has been a major barrier to the yachting sector embracing the fuel thus far.

Kongsberg Maritime has been working on using LNG fuel for over 20 years now and Oskar Levander, senior vice president of Business Concepts, believes that it has a lot of potential for the superyacht industry. “While it is still a fossil-based fuel, it is one step better than diesel because its odourless with no visible smoke and doesn’t leave stains on the deck,”  he explains. “So, it can help yachts to reduce their carbon footprint as well as improving on-board comfort.”

Levander believes that the reason the fuel has not yet been taken up by the superyacht industry is twofold, the first being space demand; “You will need more space on board to store LNG fuel – cylindrical pressure tanks are required to store very cold liquid and, in practice, this takes up three-to-four times the space compared to a diesel tank, which is square and can be placed easily inside the hull structure. So, if you want an LNG-powered yacht, you have to build a bigger vessel and that will cost more money.”

The other challenge with LNG is availability, as adequate LNG bunkering infrastructure has not been available for yachts. But development in this area has accelerated in recent years. For example, European regional port pioneers of LNG operations in the Baltic and North Sea have been joined by other public-private initiatives in the Mediterranean, such as the Poseidon Med II LNG bunkering project.

LNG is now, or soon will be, available at multiple Mediterranean ports in France and Spain, as well as Gibraltar – the Government of Gibraltar recently granted Shell a port operator licence to undertake LNG bunkering – with other development plans set to include Cyprus and Turkey. “And this is why we think that LNG might become more attractive to put into a yacht,” adds Levander.

Furthermore, a yacht built to be powered by LNG fuel could also be future-proofed for a straightforward transition to even more environmentally-friendly fuels. “LNG fuel could be a good stepping stone towards to non-fossil-based fuel like biogas without having to change the yacht. And further into the future, even synthetic natural gas, which is comparable to hydrogen in the sense that it’s carbon neutral,” continues Levander. “And that is very attractive proposition because LNG engines and tanks are much simpler than fuel cells and hydrogen tanks.”

As the superyacht industry looks towards a more sustainable future, LNG presents a safe, scalable and commercially competitive alternative that provides the clean air and human health benefits demanded in the IMO 2020 decarbonisation mandate.