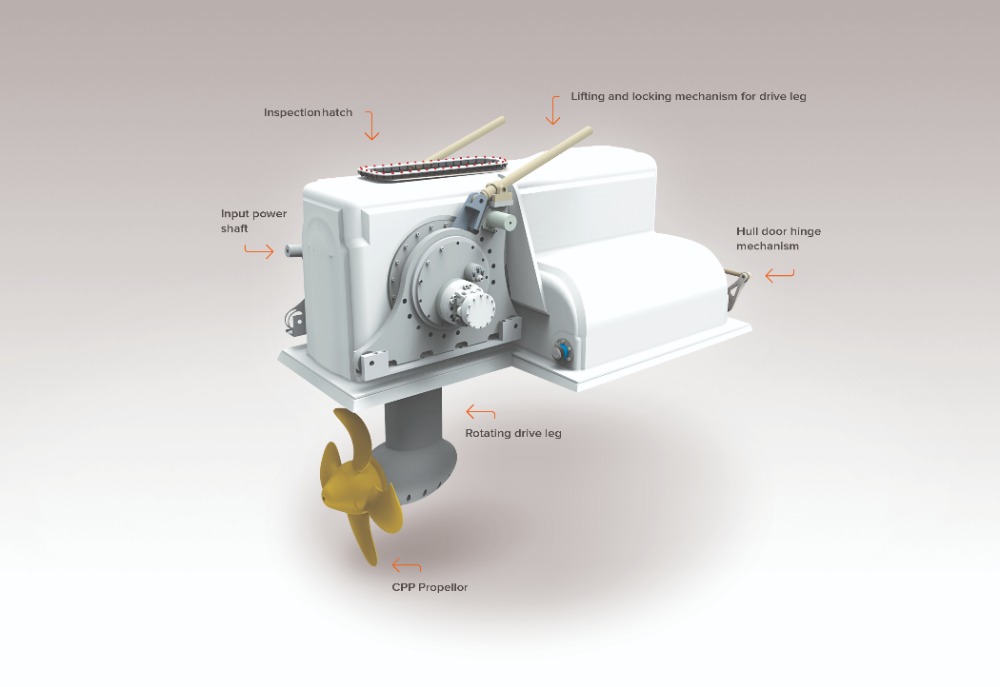 With maximum speed under sail and manoeuvrability some of the key design parameters for performance sailing yachts, a retractable propulsion system (RPS) is an appealing solution for yachts seeking a competitive edge. By ensuring a clean and flush underwater hull shape when the propellers are not in use, these systems eliminate propeller drag and, therefore, enable higher speeds and enhanced manoeuvrability.

Having considered the technology available on the market and identified areas of improvement with existing solutions, Baltic Yachts set out to create its own retractable propulsion system. With innovation at the core of Baltic’s ethos, the builder partnered with propeller expert Hundested Propeller to develop a tailored system that would take the technology even further.

Baltic’s RPS consists of a drive leg fitted with a pulling propeller that retracts into the yacht’s hull as hydraulically-powered doors close the aperture. Water in the aperture is then expelled pneumatically, keeping weight to a minimum. The system has now been installed on a number of Baltic projects, including the Baltic 130 My Song and, most recently, Baltic 112 Liara. A previous system, developed with Ship Motion Group, was also installed during the refit of Baltic 147 Visione, on board Baltic 108 Winwin and Baltic 68 Claude.

In addition to increasing sailing speeds by over 0.2 knots, the unique feature of Baltic’s RPS is its ability to rotate 360 degrees so that the unit can double up as a stern thruster...

In addition to increasing sailing speeds by over 0.2 knots, the unique feature of Baltic’s RPS is its ability to rotate 360 degrees so that the unit can double up as a stern thruster, providing the helmsman with a highly versatile tool for manoeuvering as well as eliminating the need for additional space for a power-hungry stern thruster. The full propulsion power can be used when manoeuvering sideways, compared to a traditional stern thruster that uses only a fraction of the power. Furthermore, its propellers are forward facing, meaning it pulls as opposed to push, with a pod that is perpendicular to the hull surface, allowing entry into the water and optimal efficiency while motoring.

Since conception, the system has undergone rigorous R&D to find the optimal configuration and feedback has been used to make the system more robust and reliable. For example, a lot of work and resources has gone into finding the best way to mount the drive leg to the hull in order to isolate noise and vibrations and thereby increase the comfort on board.

While the RPS is more complex than a traditional shaft drive propulsion system, Baltic has developed it in the simplest way possible with the least amount of moving parts. To enable straightforward engineering and maintenance of the system, all moving parts are on the dry side so that as much of the service areas are accessible from the engine room.

For owners looking for a flexible propulsion system that increases performance, manoeuvrability in harbour and comfort level in terms of noise and vibration, not to mention sustainability with the possibility to hydro-generate, this is an optimised solution. It is certainly a trend that Baltic is receiving more requests for, and is very likely to be seen on more projects in the future.