SuperyachtNews.com - Owner - Into the Ring of Fire 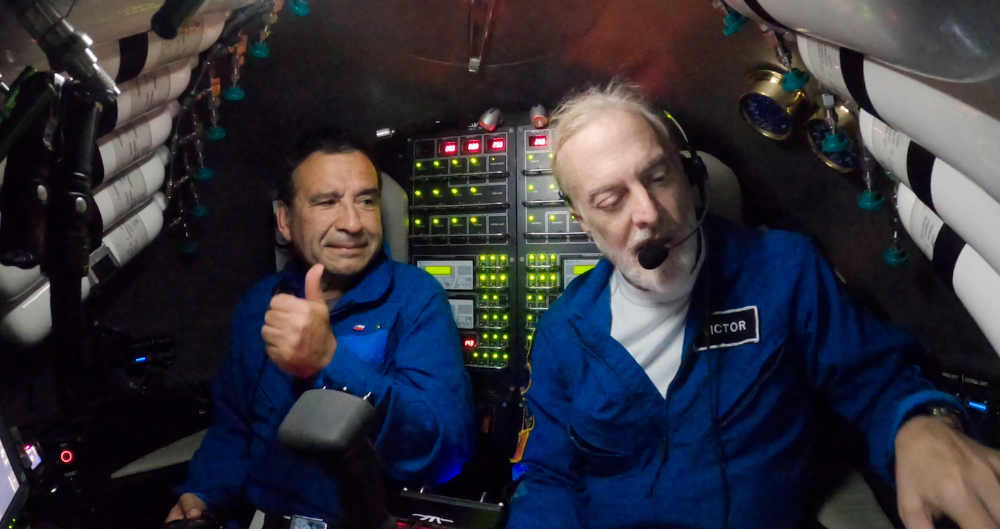 Arguably the most ambitious private research expedition in the world has hit a new milestone: Victor Vescovo, Founder of Caladan Oceanic, along with Dr Osvaldo Ulloa, Director of the Instituto Milenio de Oceanografia (IMO), have reached the deepest point in the Atacama Trench, off the coast of Chile, the deepest trench in the South-Eastern Pacific. The maximum depth recorded at the Atacama Trench's lowest point was 8,069 meters, (+/-8 meters). As the fleet of scientifically minded exploration yachts grows, the team on board and behind the 68.3m DSSV Pressure Drop continue to redefine what is possible from private exploration.

This was the first dive in the Chilean leg of the Ring of Fire Part 2 expedition, a fully permitted science expedition supported by Dr Ulloa and the IMO to undertake extensive bathymetric mapping of the seafloor in the exploration area and collect samples at various depths of the trench. The expedition was again supported by expedition leaders EYOS Expeditions along with technical partners Triton Submarines and Greenroom Robotics. SuperyachtNews speaks with both Vescovo and Kelvin Murray, Director of Expedition Operations at EYOS, about the logistics, challenges and rich rewards from this latest stage of the expedition; the first of a multi-part series of interviews and analyses as we follow this expedition across the Pacific.

"It's been great working with the Chileans,” starts Vescovo, “I think it's a corner of the world that doesn't get a lot of attention. And yet, it's one of the largest deep-ocean trenches in the world. I don't even know how many ROV’s have been down to the bottom anywhere close to this area. So to be able to do the first crewed expedition, to take scientists down there who have studied it their whole lives, and for them actually get to see it, makes it very rewarding.” 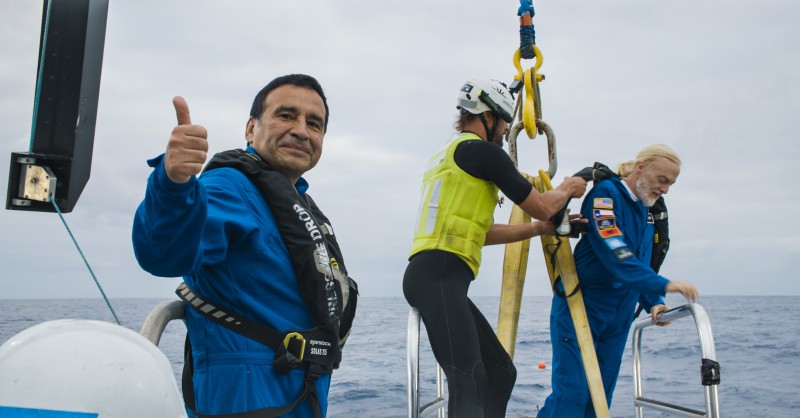 The misguided perception that the deep ocean is flat and devoid of life persisted until well into the 20th century. Before the proliferation of sonar in the Second World War, the ocean depths were assumed to be a relatively stable, uneventful plain. Early efforts to lay transatlantic cables in the mid 19th century noticed that the mid-ocean was very deep as the cable streamed off the stern, but less cable was needed as the ship passed the midpoint – hence the first hints of the mid-Atlantic ridge, and the discovery of one of the foundations of the theory of plate tectonics. Likewise, early biologists placed the limit for life in the ocean at somewhere around 200m and theorised that it could not possibly exist without some connection to sunlight. Similarly, up until the discovery of the deep-sea hydrothermal vents in 1977, it was assumed that all life on earth, directly or indirectly needed the sun to start the transmission of energy flowing up the food chain. Deep-sea exploration has shaped our understanding of the planet and potentially may guide us even further.

After multiple descents to the deepest point in the ocean, in the Mariana Trench, part of the focus has now shifted from the technological achievements, and repeatability of this feat, to expanding the scientific understanding of these deep ocean regions. The Hadal Zone (named rather ominously after the Greek god of the underworld) begins at 6000m. While only covering 2 per cent of the seafloor, these regions may hold the key to understanding life in the solar system. “The lifeforms that we're seeing in the deep ocean trenches may bear more similarity to what we would find on, say, Europa or Ganymede than in the Rocky Mountain National Park.” Says Vescovo. “What we achieve here can help us design the technology for this next horizon.” 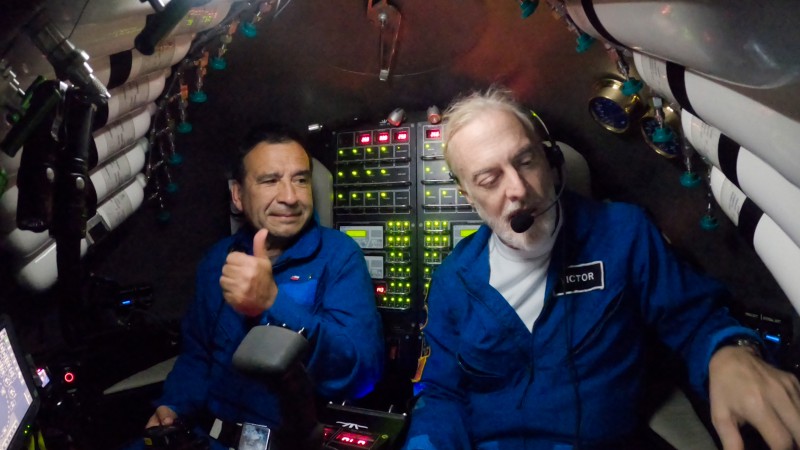 The main objective of this trip for the IMO is to map the seabed of the Atacama Trench in order to determine the optimal places to install the sensors for the Institute’s future IDOOS project (Integrated Deep Ocean Observing System for geoscience research). IDOOS aims to establish the first observation system anchored in the deep ocean along Chile’s long coast, including the Atacama Trench, in order to study both the structure and temporal variability of the physical geochemical and biological conditions present in the area - such as the deformation of the seabed over time. 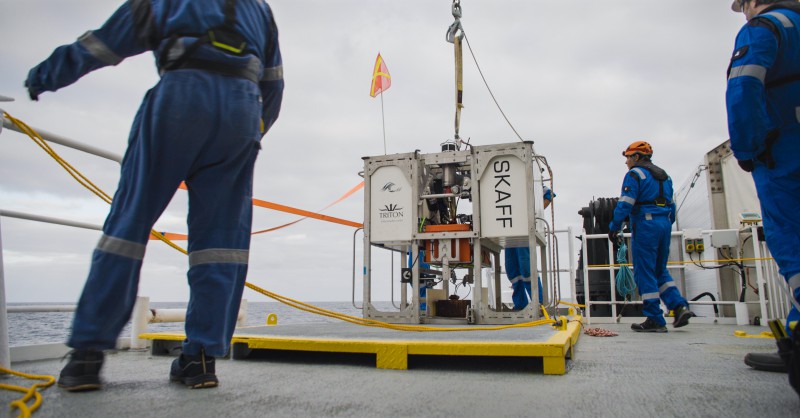 Speaking to the experiences in the Atacama Trench, Vescovo elaborates “The wildlife density was some of the highest I've ever seen in any deep ocean trench. We witnessed some amazing evidence of what appears to be more examples of chemosynthesis in the world’s deep ocean trenches. Here, however, we saw long bacterial tendrils coming off of rock faces that never see any sunlight, and obtain their energy from the minerals and gases seeping from the rocks, surrounded by a freezing seawater environment; just extraordinary.”

Expedition yachts bump into the boundaries of permits and permissions as they push the limits of exploration. This is true of much of the fleet as they move from the more traditional cruising grounds, and the sticking points become significantly more complicated when extended to research, seafloor mapping and crucially, the taking of samples. EYOS have been facilitating private expeditions, with a scientific foundation since 2008. It's fair to say from our conversations that the 5 Deeps Expedition and the continued voyage through The Ring of Fire draw on all of this collective experience. 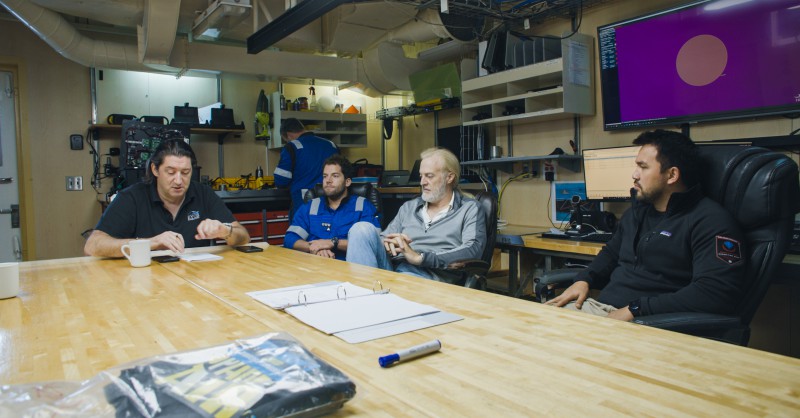 “The ship is a vessel of opportunity, as is the sub.” Starts Murray. “When combined with the sonar, landers and other scientific technology it becomes an incredible package for a region and group of scientist that we visit that simply don’t have this level of technology”

“There are multiple different levels that EYOS get involved with; we look at the overall strategic planning, provisioning, fuelling, specialised personal transfers, and what can amount to extensive permits and permissions. As we found out with the Five Deeps, nobody's ever done anything like this before. Most of these authorities don't have a form for us to fill in, it's not a simple process to say, hey, we want to do a scientific dive in your Exclusive Economic Zone (EEZ)!” Speaking to the initial hesitancy, Murray elaborates “although the science is openly available, a lot of the countries we visit still have their own national security concerns and are unsure at the idea of a foreign vessel coming and mapping inside their EEZ.”

“There can be a political tightrope to walk, so that takes a great deal of planning, organisation and research, as well as knocking on the right doors to get the permissions for what we do.” Drawing on the experience of EYOS Expeditions more broadly, Murray explains: “This is something that we're very familiar with working with yachts in the Antarctic or the Arctic or other special remote or protected places. It's just a slightly different kettle of fish when you're taking the world's only commercially certified full ocean depth sub!”

"Chile is one of these countries in the world that is very, very heavily impacted by volcanic and seismic activities. And having this trench right on their doorstep obviously puts them at great risk. Understanding the causes of this is part of the Ring of Fire expedition." Says Murray.

It takes a unique vessel to support this kind of operation, but until I spoke to Murray I did not appreciate quite the extent of the conversion and history of this vessel. "One of the great things about pressure drop and one of the reasons that she's used is that she is an extremely quiet ship. She was built in the 80s to detect Russian submarines. Therefore, you almost cannot replicate that technology, not easily, and certainly not cheaply. If you were to replicate her from scratch it would be an astronomical price!"

In the coming months, there will be further expeditions including warship search expeditions to the Midway and Samar oceanic battlefields, first-ever human-occupied dives to the bottom of the Yap and Palau trenches, and a further scientific dive to the deepest point of the ocean, Challenger Deep. This will be followed by dives to the Manila, Ryukyu, Izu-Ogasawara, and Japan trenches - in cooperation with key scientists from JAMSTEC [JapanAgency for Marine-Earth Science and Technology).

In the next part of our interview with Vescovo and the team, we will look at what is planned for the coming stages of the expedition as it moves North, and the unique technology developed in the search for deepsea shipwrecks as the team looks West over the horizon.

The above is only a part of the ongoing focus that we have on the fascinating region of the broader Pacific and the potential for growth throughout. The Superyacht Forum Live - Pacific Tour from 15-17th June 2022 will be discussing the myriad points of interest, via an invitation-only event in Victoria, British Columbia. However, if you would like to register your interest, please contact events@thesuperyachtgroup.com