Due diligence and bargain hunting

In light of Queen Anne being sold at auction, we consider the auctioning system and the risks and rewards therein… 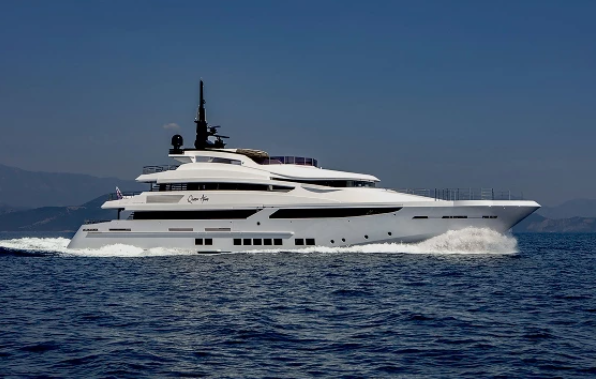 Superyacht auctions are few and far between with the vast majority being conducted because of criminal or financial proceedings. With Fraser recently announcing that it has been named as joint central agent for the sale of 46m Queen Anne, we explore some of the typical characteristics of superyacht auctions and consider whether or not they present a good opportunity to savvy buyers?

Auctions for superyachts are ordinarily conducted when the vessel has been arrested and the courts order a sale, which may be the result of a financial or criminal issue. More often than not, a bank has the boat arrested to recoup what the owner has lent. As a result, the banks are largely looking to recover what they have put in without having to pay for the continued operation and maintenance of the vessel, which we all know to be expensive. Therefore, auctions often happen quickly with the eventual sales prices being below market value. That being said, auctions have previously occurred where the owner was after a quick sale or simply sought to prove the concept of superyacht auctions.

Perhaps the most famous example of a superyacht that was sold under auction without any sort of criminal or financial pressure, was the sale of the 67m Lürssen Apoise by Dave Ritchie, co-founder of Ritchie Bros Auctioneers, which specialises in the sale of heavy industrial equipment.

During the auction, the eventual buyer John Caudwell was the only interested party to attend the auction in person. He was joined by five other telephone buyers. The auction moved at breakneck speed and 15 minutes after the auction began it was over and Caudwell had purchased Apoise (now 73m Titania) for €34m. While Ritchie expressed at the time how pleased he was with the result, given that the sale happened quickly and that he didn’t have to continue to pay for the vessels upkeep and operation (he had always planned to sell after travelling the world), it was ubiquitously accepted that Caudwell bought Apoise for a bargain price.

With an auction, you often don’t get the same level of due diligence that one would expect if you were conducting a straightforward brokerage deal. Typically, the deals are ‘as is, where is’ deals where you have to take the superyacht as you see it and, for that reason, the potential pool of buyers shrinks because as the levels of control and due diligence fall, the risk increases.

It is this lack of control and due diligence that perhaps explains why auctions have not typically attracted as many buyers the vessel may otherwise have done if it was sold traditionally. Indeed, the Information Memorandum for the sale of Queen Anne highlights as much.

“Yacht is sold AS IS, WHERE IS, with no attestation as to the accuracy of the description and/or the condition,” reads the disclaimer.

“There are no warranties, guarantees or representations other than those contained in the Purchase and Sale Agreement.”

The list of disclaimers goes on; however, it must be noted that this is the normal procedure for superyacht sales and not exclusive to Queen Anne by and stretch of the imagination. Buyers are, of course, still able to book viewings and inspect the vessel with a series of detailed reports made available including, but not limited to, a full survey, main engine & generator borescope report, engine oil sample report and so on. Nevertheless, the speed of the sale and the limitations of the inspection process necessitate that the buyer is entering a more swift and risky sale than they might otherwise do – and yet it worked for Caudwell.

On September 13, 2021, the United States of America filed a motion with The Court requesting an interlocutory sale of Queen Anne, which was granted by the Court on October 22, 2021.

On November 22, 2021, the United States Marshals granted custodianship of the yacht to National Maritime Services, Inc. of Fort Lauderdale, Florida, USA, in connection with National’s approved plan to market the yacht in a joint venture with Fraser Yachts Florida Inc. 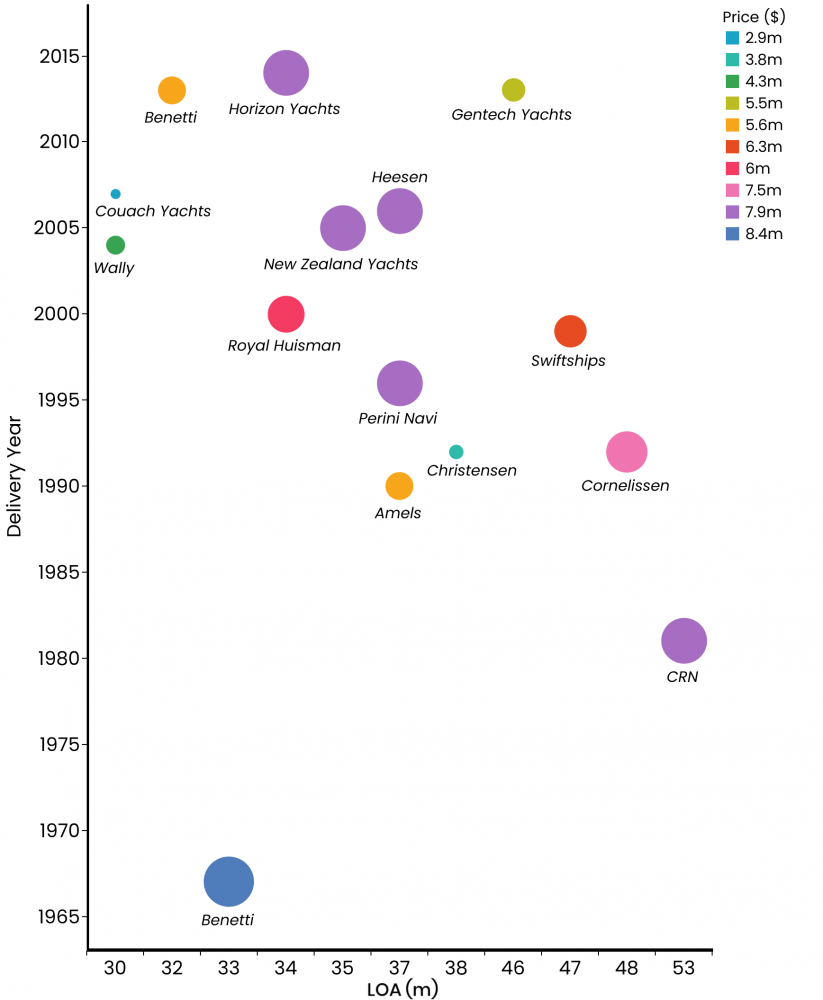 The above graph highlights the projects that are available within a similar price range to Queen Anne. Both the colours and the size of the circles represent the value of the asking prices. The larger the circle the more expensive the vessel. Queen Anne is represented by its original builder Gentech Yachts for its minimum bid set at €5.5m. The graph certainly suggests that for its size and age, Queen Anne represents a good value sale (provided the price does not increase too steeply during the auction). However, it should be noted that having been delivered by a relatively unknown shipyard, value is certainly lost on the brand, regardless of the quality of the vessel itself.

The information expressed within the graph above is only a snapshot of the data available to The Superyacht Agency. All vessels could be further analysed in terms of their broker, their name, their owner and so on. When overlaid with various other data sets, numbers become intelligence with the ability to drive key business decisions. To find out more about how The Superyacht Agency's consultative offering can help your business, click here.

In defence of a (more) frugal superyacht