SuperyachtNews.com - Owner - Conversations to carry into 2022

Conversations to carry into 2022

It's been a hell of a tumultuous year, and the tail-end of it is starting to feel incredibly glum. The light at the end of the tunnel has been closed shut by the Omicron variant, and as it tightens its grip on populations around the world, it's difficult to regain that sense of hope and enthusiasm that has gotten us through the last two years. But still, we adapt to circumstance, we find silver linings, we keep calm and carry on…etc…etc… you know the jist by now. The human race as a whole has done a lot more self-reflection and self-correction in the last couple of years than it could have ever bargained for, and for that reason, I don’t wish to inflict any more of that sentiment to any readers of this article. Instead, I’d rather celebrate some of the articles that have been published this year that I thought helped to inspire new ideas and provide insight to those that needed it.

The superyacht industry, burgeoning though it may be, is still small enough to be shaped and molded by the power of conversation and discussion. The decision-makers of the superyacht industry are usually cut from similar cloth, and have always run the risk of talking in an echo chamber. But in 2021, it certainly feels like giant, worldly topics of conversation such as sustainability and ethical business practices have finally penetrated an industry which used to be immune to such talk.

Despite what the tin foil hats may say, the media doesn’t literally tell people what to think, however, it does have a say in what people should think about. And the yachting media industry, for all its sorrows, has been telling a lot of people to start thinking about sustainable innovation more creatively. If we can redefine the lexical field that surrounds ‘sustainability’ then it could be possible to make it more popular and desirable amongst a demographic where it really counts. Glamorous sustainability is an article which doesn’t simply dance around the topic of environmentalism and flaunt it around as the buzzword that it has become. This long-form article aims to make readers re-imagine how sustainable products should be presented and marketed to the one percenters. 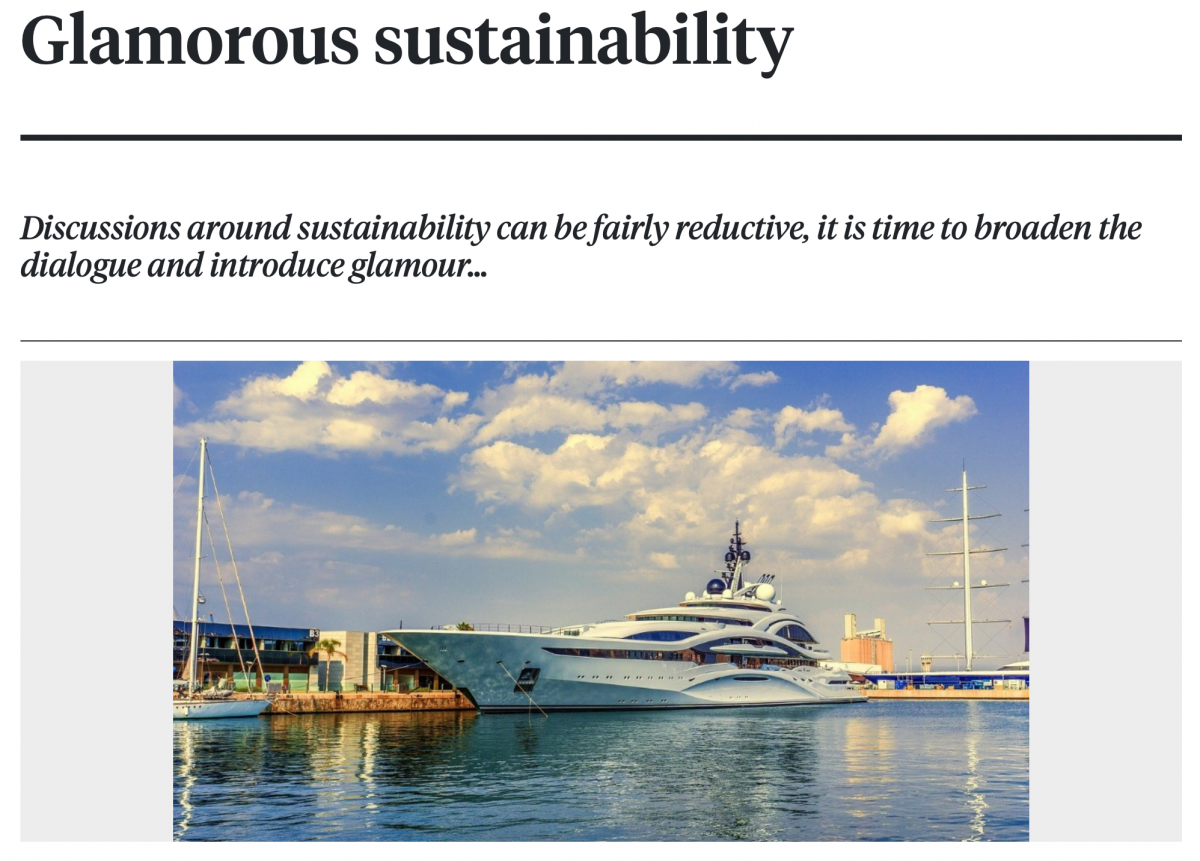 Jack Hogan, our Operations Editor, and most probably the best-informed journalist in the industry, wrote an article earlier in the year which aimed to take fire at the mainstream media for it’s lazy reportage of the superyacht industry. Race to the bottom earned widespread acclaim, and was one of the most engaged with articles of the year. The article, in my opinion, is underpinned by one sentence, “Crew deserve better than the assumption that they are all either on Below Deck or waiting for a call-up.” The overwhelming amount of clickbait and misinformation that hangs over the industry like a dark cloud is a gripe for many stakeholders, not least, by Feadship CEO Henk De Vries who commented on the article, “Where the ocean is regarded as "the road" by shipping companies, for us it is "the garden", so we must make sure that it remains clean and blossoms.” 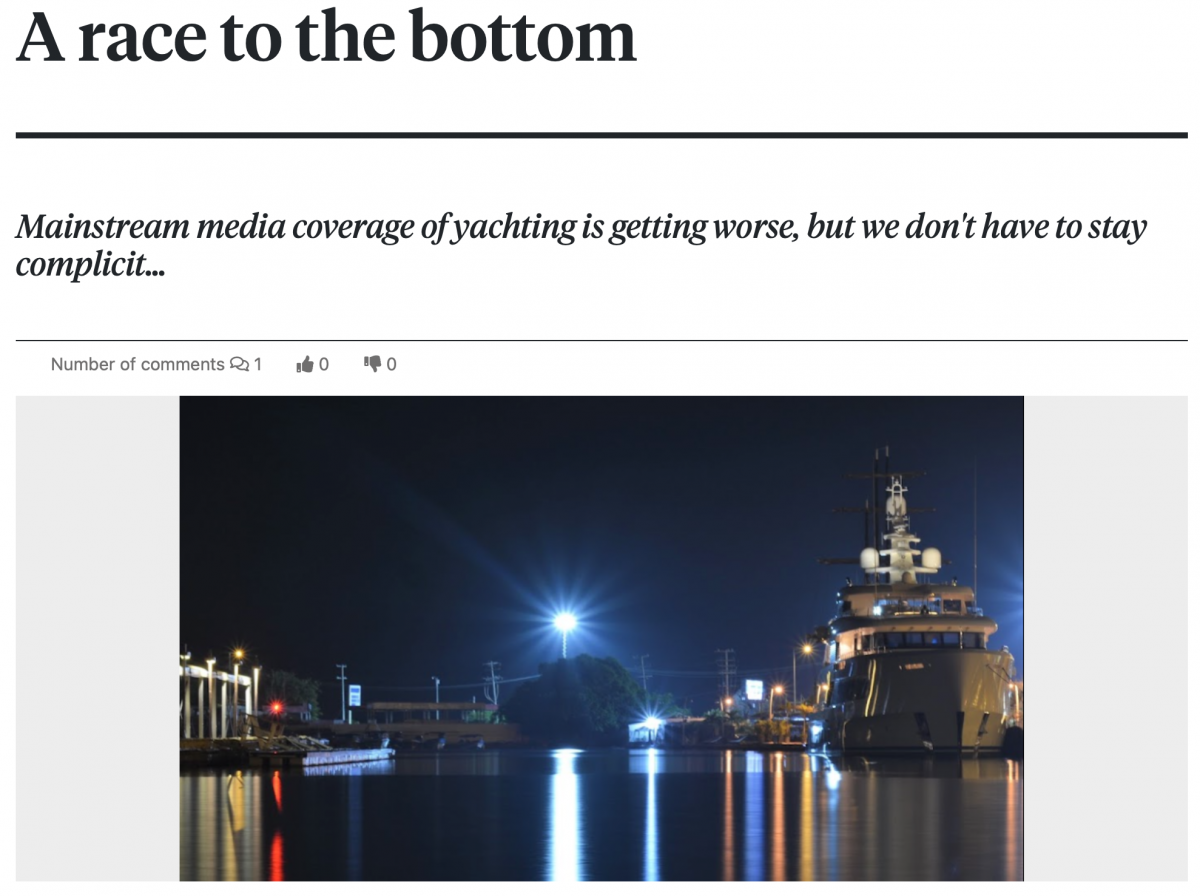 While Hogan wrestled with the mainstream media, our veteran Business Editor, Rory Jackson, took aim at illegal teak traffickers and the industries demand for unsustainable products. The exclusive on Myanmar teak being trafficked through Italy revealed that the illegal timber was also being imported into yacht building nations such as Germany and The Netherlands. Jackson poignantly wrote, “The truth of the matter remains that, if the yachting markets stopped demanding the teak, the importers would stop supplying it and, by proxy, they would stop funding a repressive and genocidal military junta.” 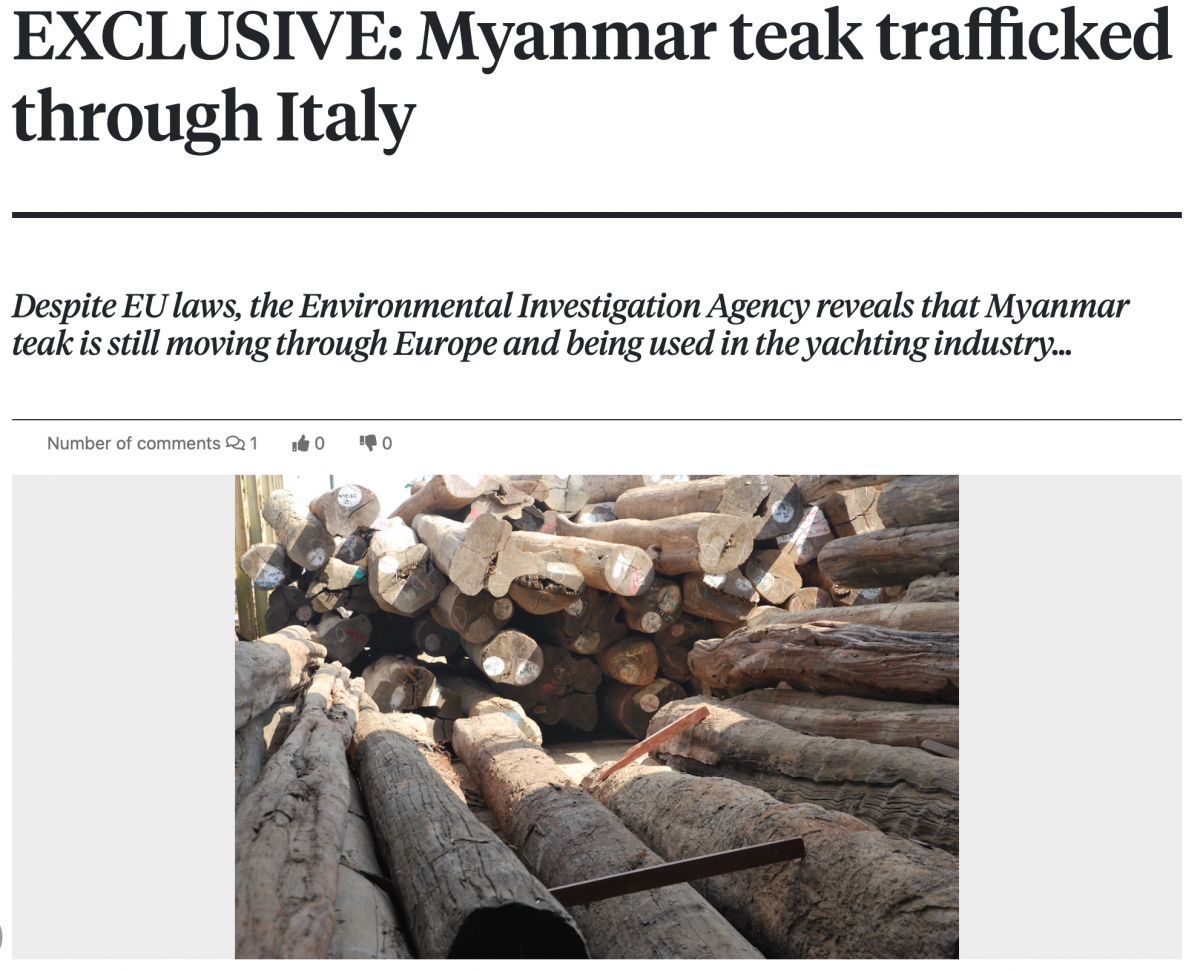 Amongst some of these rather hard-hitting pieces, we did also manage to feed the beast with some cool and inspirational concept design stories that highlight the work of the world's best yacht designers and innovators. Project Fury is one of the most impressive and thoughtful concepts to have been released in 2021 and the Robert Doyle and Van Geest discourse lays the foundation for some of the most trending topics in the design world. 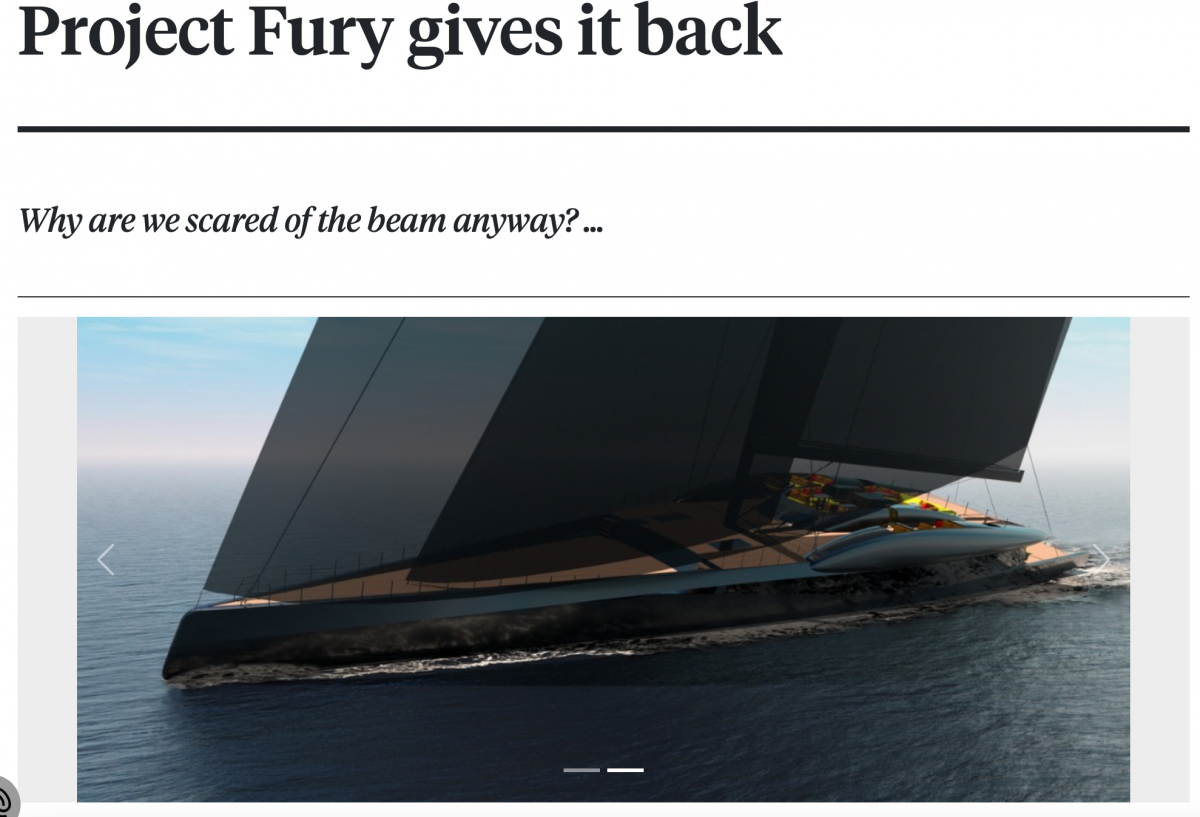 And last but not least, the quintessential young owner is a fine display of how data-driven articles can be used as an antidote to misconception and general assumption in the superyacht industry. The article showcases the expertise of The Superyacht Agency who analysed the migratory and fleet data of a 40-50-year-old US-based tech billionaire that owns three superyachts. The piece is further proof that there are simply far too many variables at play to put a blanket over an entire client base and that marginal observations can often be exacerbated in a still nascent industry. 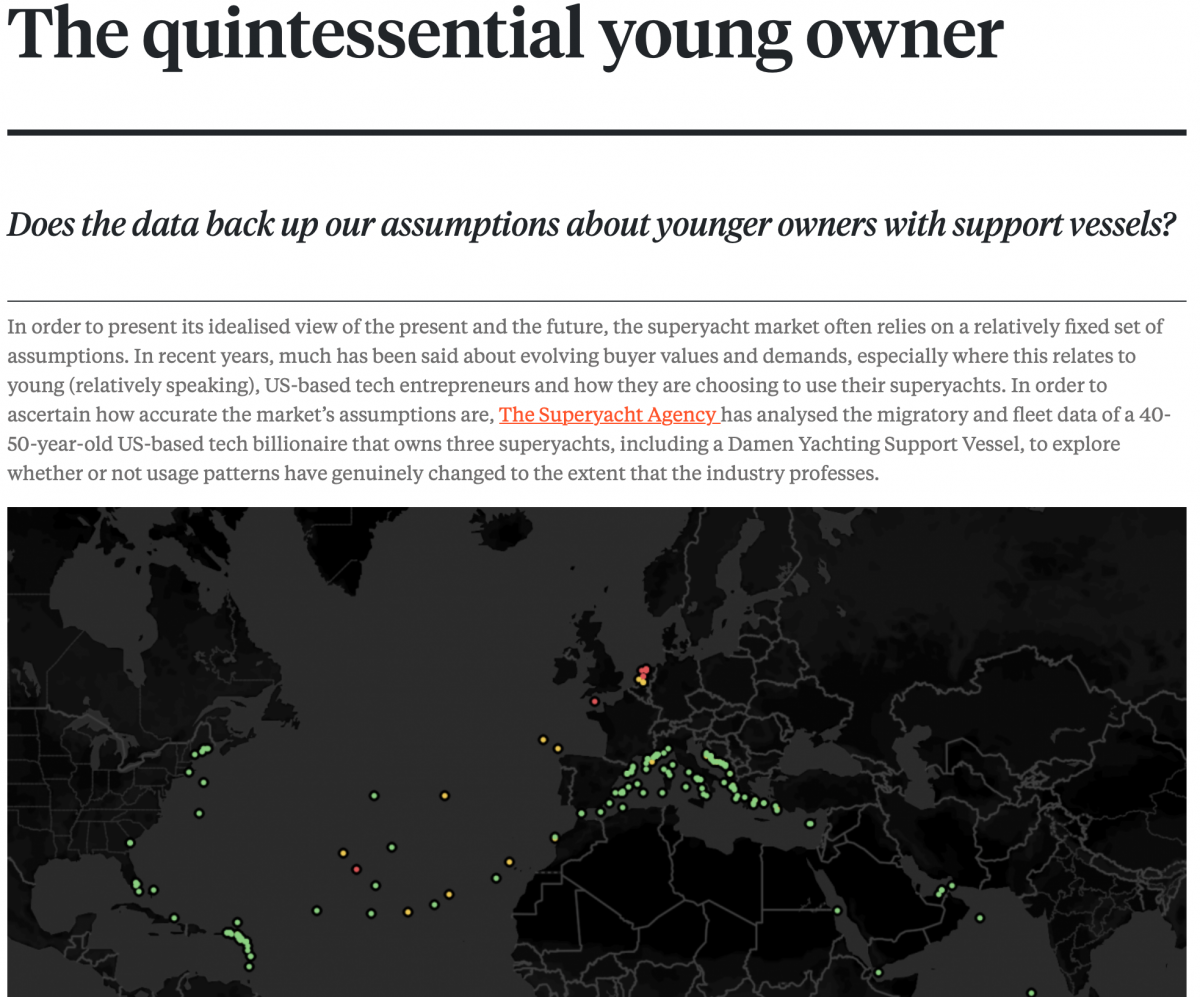 The aforementioned stories have not simply been included due to the number of clicks they’ve received or how successful their analytics are. They’ve been chosen because they are important topics of conversation, and the feedback from our readership has helped to steer our editorial direction. As we enter a new era in 2022 and celebrate 30 years of The Superyacht Group, we’d like to know what you think the conversations should be come 2022…

The future of sails