SuperyachtNews.com - Owner - A lesson in transparency 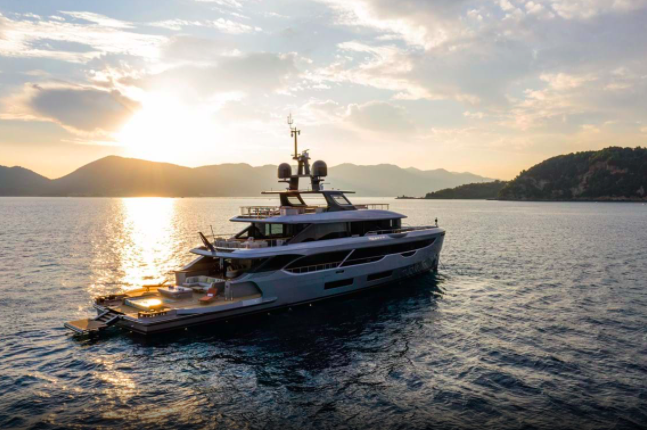 Throughout what has been an incredibly difficult period following the onset of the COVID-19 pandemic, many of the new build yards have performed admirably in the face of a challenging environment. SuperyachtNews speaks to Tim Ciasulli, owner of 40.8m Rebeca about the challenges of taking delivery of superyacht during the pandemic and we discuss the various stages of the pandemic from an owner’s perspective.

“We bought the yacht before the pandemic and took delivery of the project during the pandemic,” starts Ciasulli. “Somewhat ironically Rebeca’s model, the Benetti Oasis 40, proved to be the perfect metaphor of what was required during the pandemic: our own moving island. Still, I wonder if I would have gone through with the purchase if I had known what was around the corner.”

While the full force of the pandemic was slower to hit the United States where Ciasulli is based, those who were following the news became aware very quickly that Italy was hit early and hard by the pandemic and Ciasulli was acutely aware of the impact this may have on his superyacht project.

“Aside from the obvious concern for everyone’s safety, one of my first thoughts was ‘Oh no, what’s going to happen to the yacht’. However, Benetti were incredibly quick to call me and assure me that works were continuing all be it with a much smaller crew on board at any one time,” continues Ciasulli. “One of the great things about Benetti usually is that they are able to throw people and resources at a problem. When we watched the boat being built initially, at any given time there would be 30-40 people on board and I think that number decreased to around 10 with social distancing measures in place. So naturally, I questioned how they were going to manage the project.”

When the severity of the pandemic in Europe initially became clear, and due to the unprecedented nature of the crisis, the industry naturally began to chatter about the issues around force majeure clauses and the potential for cancelled contracts whether as a result of global financial downturn, a failure to meet contractual obligations on the part of the yard and subcontractors or a mixture of both. With so many unknowns still at play, minds were left to explore a variety of scenarios, with the many fearing the worst.

“While I never practised law, I actually went to law school. Benetti sent out a force majeure letter. Force majeure is virtually included in every contract, forgetting whether or not it is for a boat, every contract has a force majeure contract in it. You study it in law school, but you sometimes think; what the hell is this for? Because it never ever gets used,” explains Ciasulli. “Of course, the pandemic was a perfect example of force majeure, it’s typically referred to as an act of God, and it was an act of God that stopped the rapid construction of the boats. Naturally, they overestimated the force majeure, they said it was going to be three months, but in reality, it turned out to be about 30 days. That being said, the three months was probably the lawyer covering his ass.”

It must be said at this point that, regardless of the grace period the lawyers may have given themselves, to only suffer a 30-day delay as a result of the pandemic is extremely commendable on the part of Benetti and, importantly, Benetti weren’t alone in this success. All throughout the new build market, there are similar success stories to be heard. Might one question, however, how resources were being used up to this point? While the situation is anything but ideal, the successes from throughout the pandemic may have forced builders to become more efficient, as it has done for a variety of sectors and businesses.

“It made me realise that Benetti, as opposed to some other shipyards, can really throw resources at a project and bring it to fruition, maybe better than anyone else in the world, certainly at that time,” says Ciasulli.

While much credit must go to the shipyards that have managed to perform admirably throughout the pandemic, it is important not to overlook the vital role that the attitudes of superyacht owners played in the successes that the shipyards enjoyed. At times it could be argued that the superyacht community overplays the card that superyachts are an emotional purchase and not a commercial one. However, if that drum was to ever be banged appropriately it was during the pandemic. Indeed, if the superyacht world had been reliant on purely commercial reasoning, sufficed to say that 2020 may have been far, far worse.

“It is absolutely an emotional decision. It is more of a want than a need, although I suppose during the pandemic you could argue that I needed the yacht for my own sanity,” explains Ciasulli. “My initial reaction was that I didn’t want anyone getting sick to build my boat, but I had done a lot of research and spent a lot of time with Benetti before we pulled the trigger to buy this boat and their core values really matched with mine and my companies and that is integrity, passion and accountability. I felt that their integrity was very high throughout and they are passionate about their projects and this one in particular because it was such a huge departure from their typical designs, so they wanted this boat delivered as much as I did. I could see that, I could feel that and everybody was very good about keeping me apprised of the pandemic in Italy and its impact on works. I was cautiously optimistic that we would be able to spend some time on it at the end of the season and that is exactly how it worked out.”

It is clear from Ciasulli’s tone, however, that he does not believe that the situation would have been handled as well had he been at certain other shipyards for this build and during this period. Having worked through the size ranges he is no stranger to the trials and tribulations of the yachting world. Had the resources not been managed as effectively and had Benetti not been so passionate or forthcoming with updates and information, the situation may have been very different.

When asked whether or not his mindset might have been different based on previous experiences, Ciasulli comments: “No question about it. I may have gotten to the point where I cancelled the contract. It absolutely depends on the yard. In the past there have been many times when I have been treated like a mushroom…kept in the dark and fed a lot of shit. Benetti was the antithesis of that, they have been very transparent with me from the start.”

The approach that Benetti took throughout the pandemic, at least from Ciasulli’s perspective, is a positive lesson in client management, owner experience and transparency. Following the delivery of Rebeca, Ciasulli intends to use the vessel extensively during the summer season with his friends and family, making the most of his own private oasis.

How long is a piece of string?

This is not a project about nostalgia