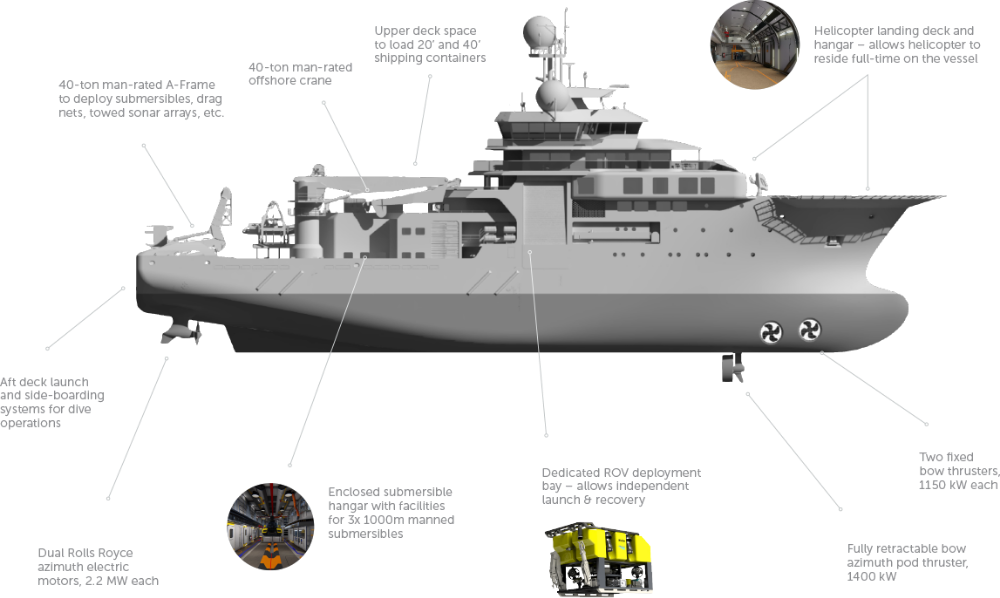 It is a momentous occasion when a new project, created in the name of science and discovery, hits the water for the first time. This week, the superyacht fleet gained a vessel that takes exploration to genuinely new heights, as the pioneering discovery vehicle, OceanXplorer entered the water at the Damen facilities after a mammoth conversion from oil-survey and supply vessel into cutting-edge ocean explorer.

The initiative behind this staggering exploration vessel is OceanX, which is a mission to explore the unseen ocean, map uncharted areas of the world, observe rare deep-sea creatures, pursue scientific and medical breakthroughs, and then bring all of these wonders back to the wider world through cutting-edge media.

“It is an unbelievable joy for me to be able to help facilitate this with all these wonderful people and wonderful organisations,” says philanthropist and superyacht owner, Ray Dalio, who created the project with his son Mark, director James Cameron and other leading scientific partners. “We are very excited about our commitment to exploring the ocean and bringing it back to the world.”

“It is an unbelievable joy for me to be able to help facilitate this with all these wonderful people and wonderful organisations.”

Upon completion, OceanXplorer will join OceanX’s 56m Alucia, which has pioneered a number of ocean-discovery missions since its delivery in 2016 including the first exploration of the deep ocean around Antarctica, taking a submarine down more than 1,000 metres to reveal sights no human has ever seen before, as well as discover new species and advancing conservation science. Alucia also hit headlines when she became a significant part of the BBC series Blue Planet II with Sir David Attenborough.

“We are really thrilled, because with OceanXplorer’s maiden voyage, we will be launching a new series in partnership with the BBC and James Cameron, that will be airing on National Geographic, to venture into the least explored parts of the Indian Ocean,” says Mark.

The design of this astonishing new vessel is from the boards of London-based studio, Gresham Yacht Design, headed by Steve Gresham. Since the birth of the project Gresham has worked tirelessly to ensure that every aspect of this mesmerising conversion was up to the challenges that lie ahead.

“It is nice to have the opportunity and it is genuinely one of the most exciting projects I have ever been involved with because it has all been so very different and fascinating as well,” said Gresham in a recent issue of The Superyacht Report. “Ask me about submarines, and I can tell you all about them now - I couldn’t have done a couple of years ago. Ask me about AUVs or moon pools and I can tell you all about them, it really is fascinating.”

All of the technology on board has been carefully selected to provide the scientists on board with everything they could possibly need to explore unprecedented regions around the globe. This includes, state-of-the-art dry and wet marine research labs, a top-of-the-line production and media centre, manned and autonomous deep-sea submersibles, helicopters, drones and so much more.

“To do any really great project, requires the orchestration of the best people in the world,” adds Ray Dalio. “It brought together, scientists, explorers, shipbuilders, media people… each, the best in the world, to collaborate and visualise something that has never been done before.”

One of the stand-out features on board, is OceanXplorer’s dynamic positioning system, which has been designed to enable the team to carry out precision experiments beneath the vessel. “You can reach a particular point, press a button and the boat will stay there, all night and all day, within millimetres of where the boat originally started,” highlighted Gresham.

OceanXplorer is truly a one-of-a-kind vessel and a spectacular achievement in the name of ocean discovery and science. “No ship has ever been built like it,” says Orla Doherty, Executive Producer at BBC Studios. “It is going to enable me and other filmmakers, scientists and explorers to get out there and find some things that we truly don’t know are there yet.”