A new kind of client

The recent ‘Crypto Crash’ means that it might not necessarily be the finest hour to begin speculating further on the curious world of blockchains. For many, the idea of a world with decentralised banking, democratic businesses, and an open digital economy feels more like a beguiling promise than a feasible reality. But you’d be seriously deluded to think that it's all just pie-in-the-sky thinking - today it's estimated that there are over 100,000 people in the world who have over 1 million dollars worth of bitcoin alone stashed away. And this ever-evolving facet of the finance world has already proved that it takes more than a few blips and sneers to cast it into the realm of forgotten trends.

What the superyacht industry sometimes fails to realise is that it's not just about trying to convince your average ‘Crypto Bro’ to buy a superyacht. It's about showing the big players that this is an industry that can speak their language, and most importantly, it's an industry that can make them money. Young, altruistic Californians and ultra-high net worth Asians have burst onto the Bloomberg Billionaire index in the last couple of years, and the vast majority directly oppose the very thought of spending their precious time on a giant superyacht drinking cocktails.

There are plenty of reasons why a new-age billionaire wouldn’t be interested in the superyacht industry. Perhaps they are workaholics, or they think it might not be good for their green credentials, or because the return on investment is terrible, or maybe it just doesn't give them the same buzz that the metaverse and space tourism gives them. Whatever the barrier for entry into the superyacht market may be, there's no reason why it can’t be torn down through improved collective awareness and forward-thinking initiatives.

Sam Bankman-Fried drives a Corolla, sleeps on a beanbag, and plans to only keep enough money to maintain a comfortable life (at least $100K/year). pic.twitter.com/ywGV9iDp4V

Sam Bankman, a 30-year-old crypto billionaire worth US$24 billion prefers to sleep in his office and play video games in his free time

Andrew Grant Super, of Berkeley Rand and Deer Hague, believes that there is a general lack of understanding and acknowledgement for the true scale of the potential client pool being ignored by the superyacht industry. Super explains, “I feel that - and it's very controversial to say this - but I think the physical yacht will become more and more over-engineered, and more and more expensive. And that means fewer and fewer people can afford them at the high end. So if you want to buy one your probably either an oligarch, a member of a royal family, or maybe a tech billionaire, and after that, there isn’t really much else.”

Super continues, “I don't see the industry catering to all of these extra potential clients. In fact, they don't even know how to identify them. The best they've got is ‘Generation Z’ or ‘Millennials’ which is just what they’ve picked up from a google search. They don't have a proper understanding of ‘the crypto kids’ and DAOs (Decentralised autonomous organisations). I mean, I know crypto kids in their late twenties and early thirties that have a net worth of around 150 to 200 million in certain cases. But the industry is not geared up to hanging out with them, talking with them, and helping them understand how this industry represents something that they're all about - which is very different to the billionaires from the dot-com era.”

The main frustration for Super is the fact that it takes so long for the industry to react to the evolving profiles of potential superyacht clients. But there is nothing like a mass exodus of Russian oligarchs from the market to kickstart a drive to find an alternative pool of clients. Super is of the opinion that if the industry can get more involved with immersive technologies and learn how to ‘speak the lingo’ of the digital natives, then perhaps there is an opportunity to change the face of yachting for the better. 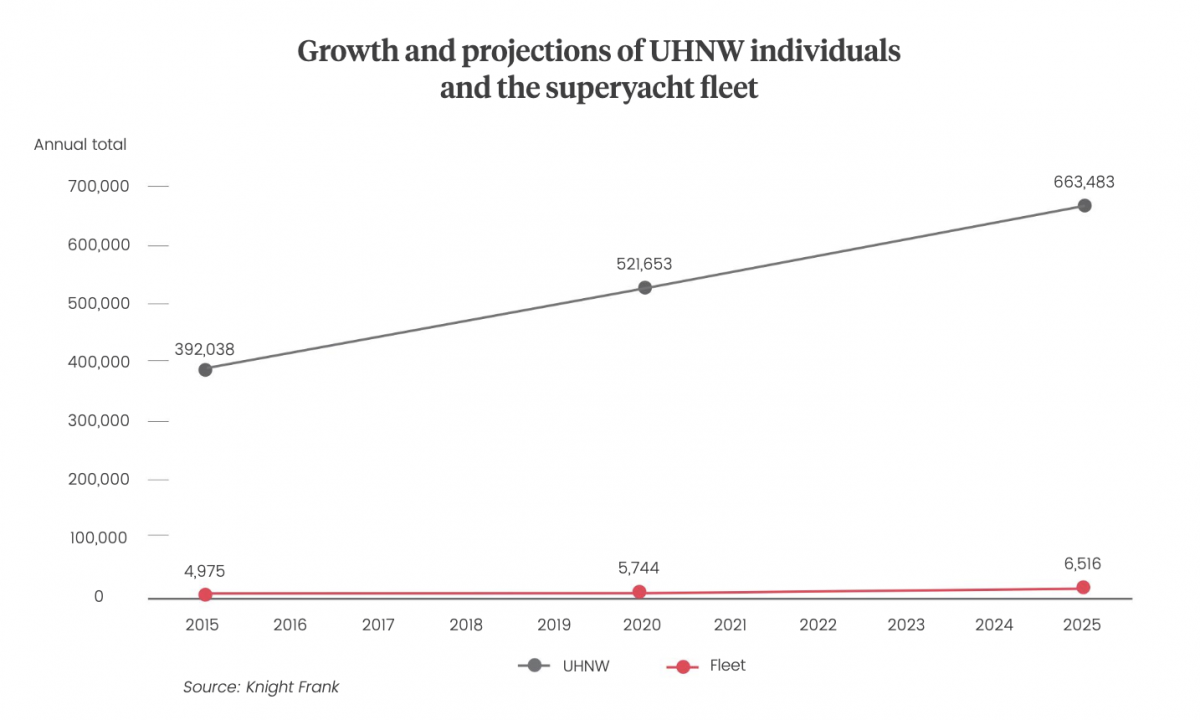 Fleet growth compared with the UHNWI wealth growth is uninspiring to say the least...

Super says, “The best that this industry can do is say that one day this next generation will come in and they'll probably have crypto money. That's wrong. The next generation is already here and they have a substantial amount of wealth… There's a whole new body of people that have the capability, the means, and the desire to buy into the yachting industry as clients who are not on anyone's books at all. That could change the shape of the industry, whether they're part of a DOA, whether they're buying a physical onboard asset as an NFT, whether they are experiencing things through a metaverse, or whether it's via a blockchain. It's all just ways of attracting a whole new market to the yachting industry. And to me, that's the most important message. And there are all these people looking at it and just going, well, that sounds nice sometime in the future.”

While it is frustrating to watch one of the world's most opulent industries squeamishly skirt around a giant pit of digital money, that doesn’t mean that there aren’t a few risk-takers in the market looking to shake things up. Super himself is involved in creating NFT experiences for immersive adventures in yachting as well as ‘gamifying’ owner's time on board by creating digital portals that hold the key to incredibly exclusive and highly valuable NFTs. A number of brokerage houses have also begun to accept crypto payments and there are a number of digital design studios really beginning to push the boundaries of interior design. The industry has always been a couple of years behind the rest of the world, but it will need to get up to speed with the next generation if it has any inclination of diving head first into the digital money pit.

NFTs and superyachts - is this the winning formula?