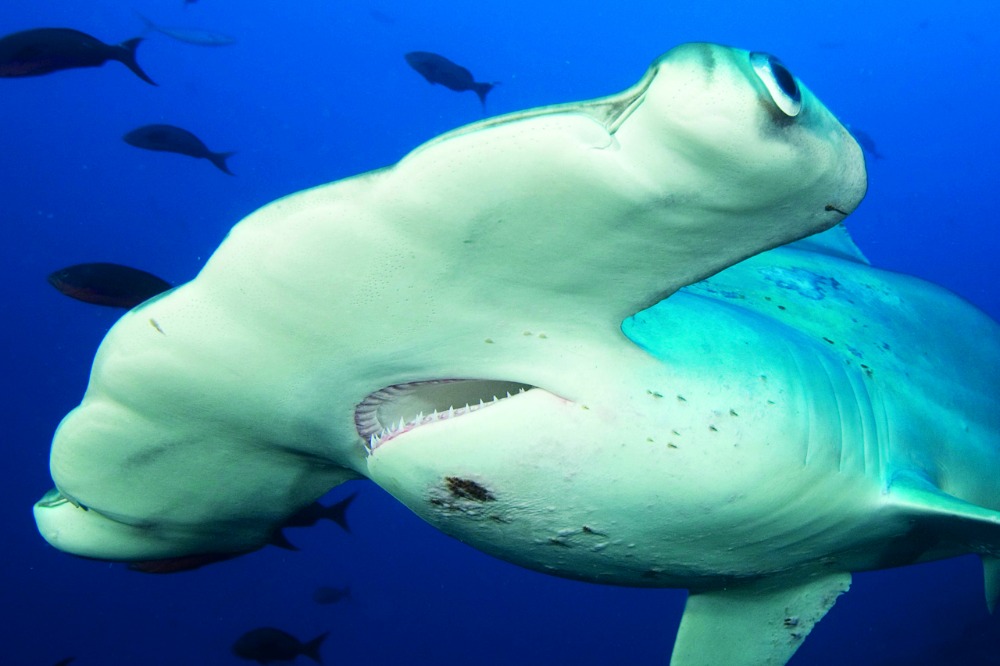 The following is the second part of a feature I wrote for The Americas Superyacht Report about The Golden Triangle, and the region's potential for growth as a destination for exploration minded superyachts. In this part of the journey, I speak with some of the research groups that are pioneering the scientific work that supports its protective status, the delicate state of legislation and the burgeoning positive relationship between superyachts and scientists in the South Eastern Pacific.

The delicate interplay between the native population, tourists, fishing fleets and the government is finely poised. Announced during COP26, the expansion of the marine protected area and the Galapagos Marine Reserve to encompass an additional 60,000 square kilometres is a positive development. The expansion plans to protect the area along the Cocos Ridge – an important migration route for species such as hammerhead sharks and leatherback turtles – is a recognition of the fact that the Golden Triangle is part of the Eastern Tropical Pacific Marine Corridor, and an interconnected population of migratory species. In a declaration signed by the presidents of the four nations [Costa Rica, Ecuador, Colombia, Panama], the leaders say this move will help them protect 30 per cent of their marine waters by 2030.

Much of the research that underpins our understanding of the area has been undertaken by foundations such as Fins Attached, but announcements don’t always equate to positive change. Randall Arauz, international policy director at Fins Attached, remains cautious. “The reason we’re not celebrating is that an identical agreement was signed in 2004 from the same four countries, and they were saying the same exact thing – ‘We’re going to invest. We’re going to study the movements of these animals. We’re going to create these corridors, blah blah blah’. Now it’s 17 years later and nothing has happened.

“We want to make them accountable now for what they’re saying. We want to start seeing some real protection and funding. We have elections in Costa Rica this February, so the authorities need to make these decisions now. And our fear is that they’re going to sign this agreement and say, ‘OK, the job is done, now it is the next president’s job’.” Says Arauz.

The potential of superyachts to do good for the region is hard to overstate. The yachts themselves have the range and capacity to act as a transport between the remote islands – the mobile water production capacity can be vital, surplus diesel, and the list goes on. Many yachts take up the opportunity to contribute financially to the various parks and this is where Nico Ghersinich, of Sea Masters Costa Rica, has encountered issues in the past. “It’s a nightmare of bureaucracy. With small donations, with planning, directly to the needed pro- jects, it can be much more beneficial. Through official channels, it can disappear.”

One of the key contributions that is exciting for those on board is to have scientists involved directly, but Rodolphe Holler, of Tahiti Private Expeditions, has some prescient advice for yachts considering this. “There are very few guest trips that can handle the demands of scientific research because it requires a lot of patience, time and inactivity. For example, some of the work we do is tagging tiger sharks. To find and tag a tiger shark takes many days of baiting, tracking and waiting. It requires focus and attention all day, and while this is happening the boat cannot do much else. If you want to do something in terms of conservation or scientific research with guests, keep it simple.”

Holler adds, “The best way to do a scientific research project with guests is to keep them separate. Have a dedicated boat that is funded and operating within the region of the trip. The guests can come and go, and the work can keep going. But brokers and captains need to be honest with guests, it is very difficult to make the perfect plan. There are a lot of boats out there pretending they are doing scientific research but if you look closely, they are doing nothing.”

Arauz has just completed two successful trips with superyachts, albeit two rather iconic explorers, Alucia and Voyager. “We have been deploying acoustic receivers at the seamounts, and in order to do this, we need AUVs [automated underwater vehicles] or, even better, a manned submarine. Working with a superyacht with this level of equipment has been a huge advantage for us.”

But the shortcomings of a large yacht can become clear when it comes to specific scientific work. Arauz adds, “We do a lot of fishing for sharks in order to tag and release them. Recently, onboard Voyager, we tried to do the fishing off the yacht. However, the deck was too high, we needed the dive platform. It may have worked if we had more time and had been more organised in advance. It is an invasive method. We need to minimise the harm to the animal as much as possible.”

To fund their trips on the specialised M/Y Sharkwater, Arauz explains that they sell as many berths as possible to citizen scientists, at around $6,000 per person, the consequence being that the scope of work possible is narrowed and dive-focused. Trips to the seamounts, where scuba diving is impossible, are a harder sell. Having a superyacht charter Sharkwater, then leaving everything to Arauz and his team while stepping back and engaging from a distance, may not seem an attractive proposition, but it does present the most efficacious route to a socially responsible expedition.

“If a superyacht was to accompany and/or fund the trip, could we put together a team of six to eight? I could do it in a heartbeat! And we could get so much work done.”  Says Arauz

The research Arauz refers to is the real backbone of the conservation work that can enforce the protection of this area of unparalleled biodiversity and creates a template for responsible and respectful engagement by the superyacht sector. We cannot simply do whatever we want because our boats are big and expensive. This region draws us in because it is wild and pristine, but the guardians who maintain it are under-resourced and, by extension, under-researched.

With the resources and influence that our industry can wield, we can transition from being extravagant but tolerated novelty visitors to integral agents of positive change in one of the last wildernesses on earth.

The above is only a part of the ongoing focus that we have on the fascinating region of the broader Pacific and the potential for growth throughout.  The Superyacht Forum Live - Pacific Tour from 15-17th June 2022 will be discussing the myriad points of interest, via an invitation-only event in Victoria, British Columbia. However, if you would like to register your interest, please contact events@thesuperyachtgroup.com

If you want to be part of The Superyacht Forum Live Tour in 2022, and ensure you don't miss out on our global selection of live events in key Superyacht hubs, sign up as an Executive Member. Click here to learn more about the extensive list of benefits membership affords you.

Exploring the other triangle

Lockdown in French Polynesia extended to end of April