SuperyachtNews.com - Operations - Exploring the other triangle

Exploring the other triangle

A dynamic new frontier for exploration minded superyachts, but only with careful preparation and planning… 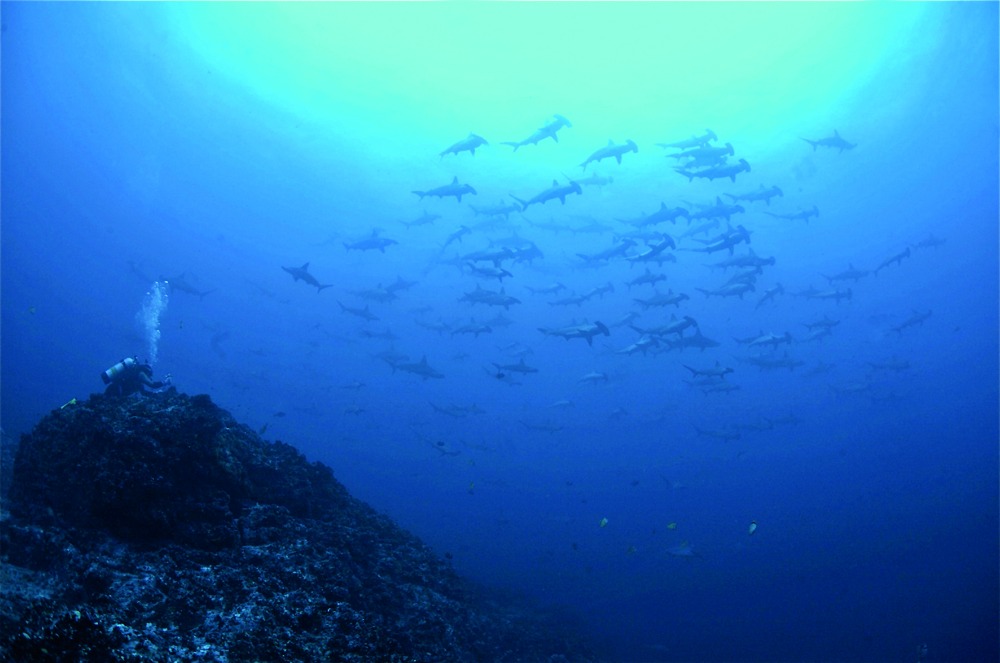 Few superyachts have visited the Golden Triangle, one of the last wildernesses on earth. However, there are rich rewards for intrepid owners and crews who are prepared to change their set routines in challenging waters. The fabled Bermuda Triangle may not be at the top of the bucket list of destinations for every superyacht owner … but there’s another ‘triangle’ that is infinitely more interesting for those with exploration in mind. The following is an extract of a feature I wrote for The Americas Superyacht Report, that was born from meeting a fascinating group of local agents, scientists and guides on a trip through the region in 2018.

Situated in a convergence of multiple nutrient-rich currents and upwelling zones lies a group of islands that form this other ‘triangle’, less well known than the Bermuda variety, on the other side of the Panama Canal. These three island groups are each governed by different Central and South American countries, each with a diverse history. Their respective environmental protection zones, dynamic ecosystems and unparalleled diving have seen interest from superyachts increase as migration fans out into the Pacific. 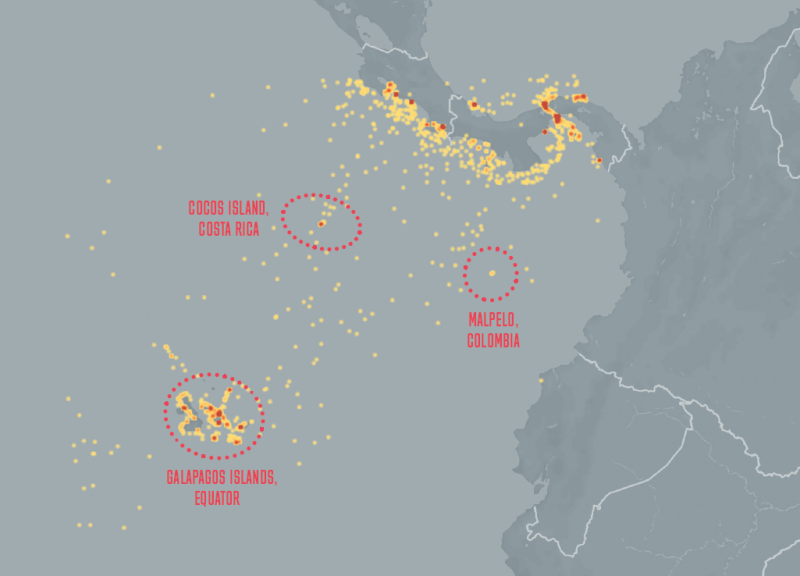 30m-plus superyacht migration in the region between 2015 and 2021, credit - The Superyacht Agency

The Galapagos Islands of Ecuador hardly need any introduction and, together with Cocos, its less-feted tropical cousin, comprise the central nodes on the Eastern Tropical Pacific Marine Corridor (CMAR). The Colombian Island of Malpelo, on the other hand, is much less conspicuous. As can be seen below in the heat map of 30m-plus superyacht migration in the region between 2015 and 2021, these make up an area that is known as the Golden Triangle by those who operate there, and only a handful of superyachts have ever been to all three points.

The region represents decades of conservation and cooperation between the three Latin American countries that govern each island group. It can feel overregulated, at times antiquated and frequently frustrating but it’s one of the most breathtaking and worthwhile superyacht destinations in the world. If approached in an informed and prepared way, it represents part of a generational attitude switch in how a superyacht can interact with the ocean.

“We are seeing more and more boats coming through [The Panama Canal] that think things work the same over here, which they do not,” says Rodolphe Holler, of Tahiti Private Expeditions, who has led hundreds of dive-focused expeditions across the Pacific and throughout the Golden Triangle. Yachts bred on a diet of Caribbean and Mediterranean operations may be underprepared for the oceanic Pacific of the Americas.

“Some yachts come down with a lot of respect for Cocos, others treat it just like any other anchorage,” says Nico Ghersinich, of Sea Masters Costa Rica. I was fortunate to meet Ghersinich on a trip to the region a few years ago and saw the pressures – and extreme rewards – that this diverse region can produce first-hand. Offering the finest shark and large pelagic sightings on earth, the chance to interact with whale sharks and schooling hammerheads is the defining drawcard for many yachts – but this requires an adjustment to operations.

“With some yachts, their systems of operations just do not work,” adds Ghersinich. “They are not experienced enough for this level of the trip. Some yachts are great but, especially with the larger yachts which are not willing to change their systems, there are issues. For example, changing the tender driver between dives can be super dangerous.” Affirms Ghersinich.

Ghersinich’s point about diving and tenders is one I take personally. Of the hundreds of dives I’ve led or driven the tender for around the world, nine of the ten scariest were in the Golden Triangle. (The other one involved 10 Russians diving with rebreathers wearing nothing but speedos after midnight and more than a couple of vodkas at a reef in Thailand, but that’s another story.)

The island of Malpelo, above all others, is the most intimidating. Located 200 nautical miles south of Panama and 200 nautical miles west of the Pacific coast of Colombia, it’s also one of the most isolated military outposts in the world. Apart from the solitary Colombian military attaché, the island’s only other terrestrial inhabitants are the ocean-going sea birds. However, it’s quite another story below the water. Lying within the tropical convergence zone, the outcrop is the focal point for many large pelagic species. For a dive-orientated superyacht, it’s hard to imagine a more challenging location for superyacht operations. 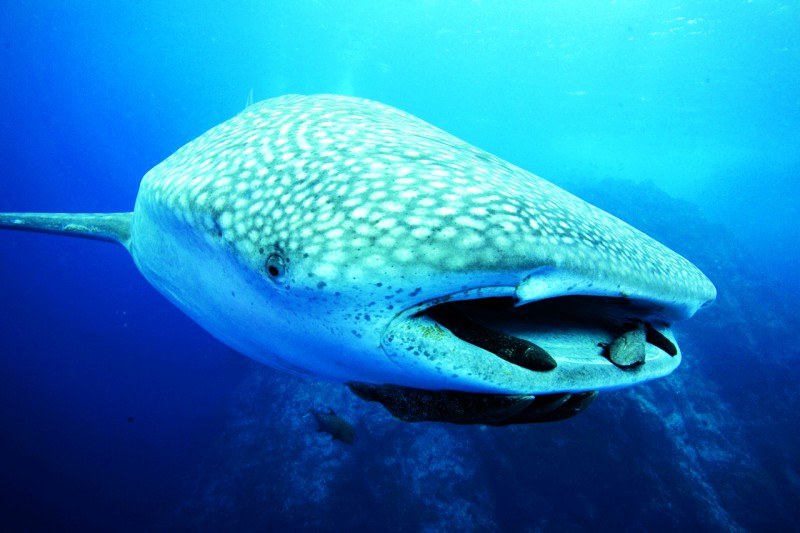 The waters around Malpelo reach more than 1,000 metres deep within a couple of boat lengths from the granite cliffs, making any anchoring impossible. While the slow steam around the island day after day may be tedious, the tender driving presents the most challenging aspect of any trip there. Ghersinich says bluntly, “In Cocos and Malpelo, you need to have your best tender driver operating the dive boat at all times. I know that this is hard, and many boats feel that they cannot change their routines and the way they dive, but this is a completely different experience.”

Ghersinich has strong advice for yachts that are willing to take up the challenge of a trip to the Golden Triangle: “Without the proper attitude, a yacht may lose someone one day. Almost no yachts have all the required safety equipment, such as a Nautilus system or other personal trackers. It is such a challenging area. We need to be very careful to avoid losing a diver.”

Trying to follow a diverse group of divers from the surface, when the currents change, simply by following the trail of bubbles challenges the skills of a deck team on a magnitude many times higher than anything taught on the powerboat level two course.

“Touch wood, there has not been a major accident involving a yacht. That is in large part due to adhering to rules, having experienced crew and not pushing the limits,” says Ghersinich “Liveaboards are always encountering issues because they push the number of divers in the water. On yachts, we don’t, and that is the safe way to do it.” Adherence to the local rules can test the patience of owners and crew, but they are there for a reason.

To read more about the Golden Triangle and the science that is underpinning the conservation of the region, the surprising history of regulations in the Galapagos and further insight from The Superyacht Agency, be sure to sign up as an Essential Member to gain access to the entire feature, and many more. Essential Members of our community will also be the first to have access to the upcoming The Superyacht New Build Report - the industry’s most in-depth and reliable source of news and information for one of the most crucial sectors of the market.