SuperyachtNews.com - Fleet - An analysis of the superyacht interior design sector 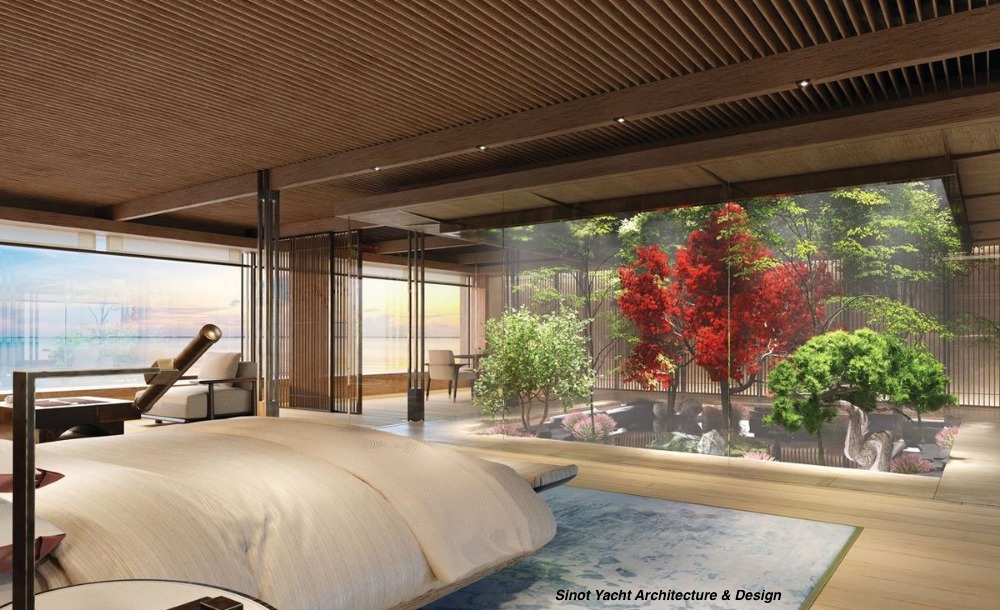 The superyacht interior designer sector is fascinating for a number of reasons. Stakeholders working in this space must be incredibly agile and flexible in order to deliver the very highest quality of creative and bespoke interiors for UHNWI’s. The typical interior designer also boasts a unique and intimate relationship with their clients, who often demand perfection and outrageousness as a minimum standard. In this article, data from The Superyacht Agency will be analysed to provide insight into a corner of the industry which is often simply admired on its aesthetically pleasing surface level.

Analysing the interior design sector by country reveals the extent to which the Italians dominate the largest share of the market, with 804 projects on 30m plus vessels since 2010. With that being said, the United Kingdom have done arguably more work in bigger spaces, as the data shows that the Brits have a higher average gross tonnage. However, despite having 754 less projects than the Italians, it is the French who have surpassed the 2,000 average GT mark during the same time period. The average length of vessels that have been worked on by French interior designers in the last 12 years stands at 67m. 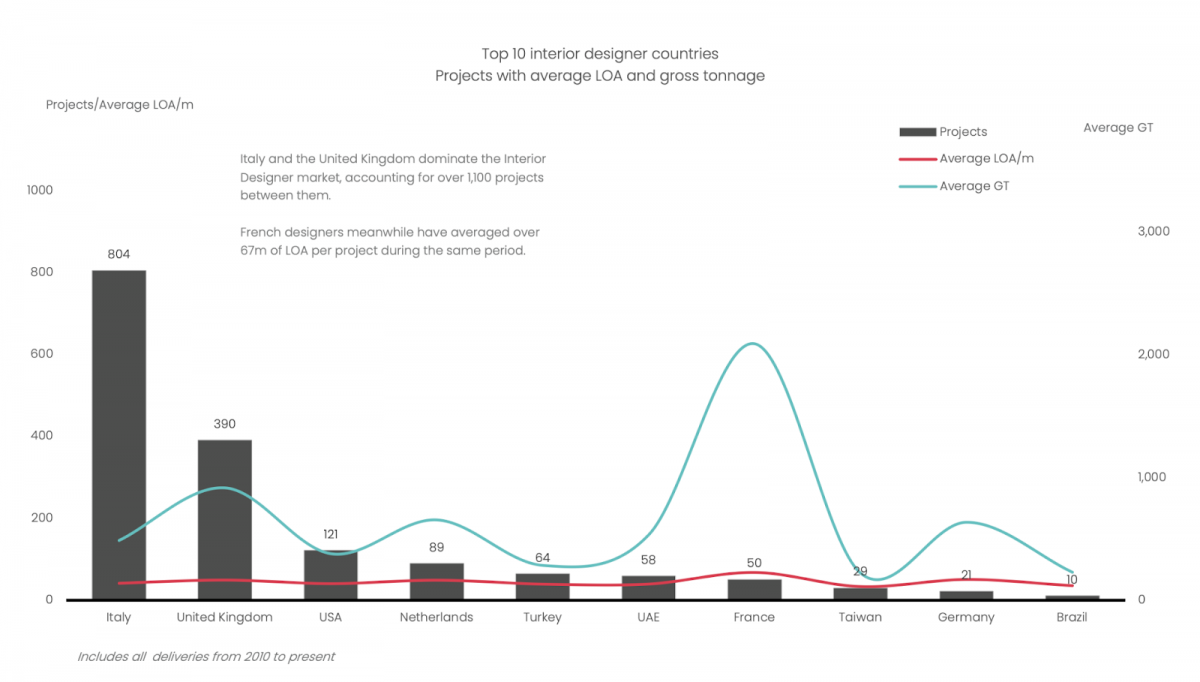 Moreover, clients who own the very largest private yachts in the world (over 90m in LOA) are typically choosing to have their interiors designed by British companies. Italy also has an impressive resume in the 90m plus sector having worked on fourteen projects since 2010. Between the UK and French designers, they have worked on yachts with an average length of 116m when analysing above the 90m plus bracket. 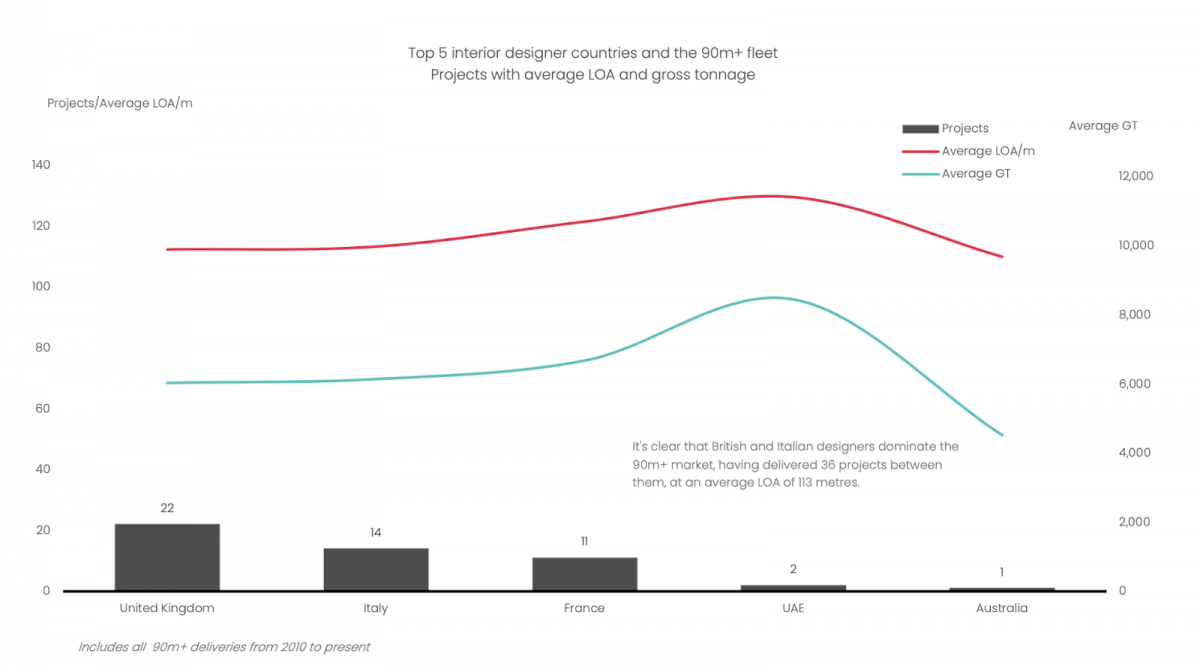 In terms of individual designers, Winch Design has delivered almost 500 metres in LOA since 2010 while Terence Disdale Design have completed almost 35,000 gross tonnage during the same time period. Nuvolari-Lenard, who are responsible for the interior design on 143m motoryacht ‘Nord’, Alberto Pinto, the interior designers behind the 140m Ocean Victory, and Zuretti Design, who completed the interior on Lurssens 106m Amadea, all came close to hitting the 400 metre total LOA mark. 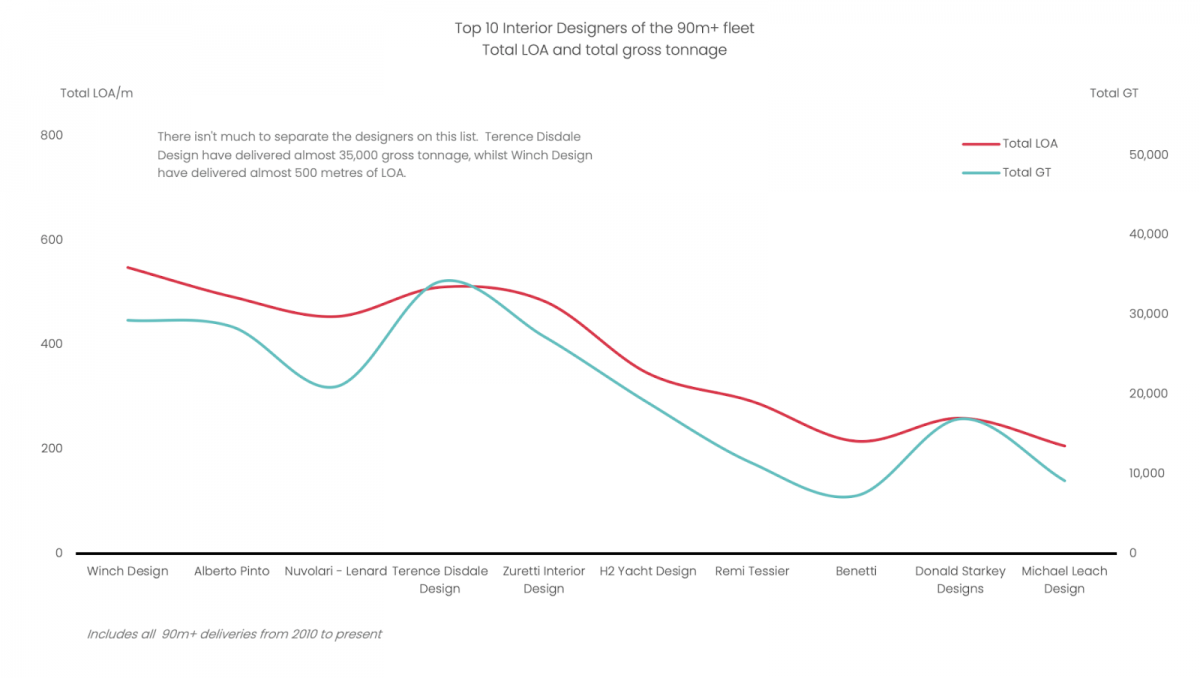 Francesco Paszkowski has delivered the most interior design projects over 30m since 2010, with 96 in total. However, the design companies with the highest average LOA include RWD, Zuretti, and Azimut Benetti. Those same companies also boast the highest average gross tonnage of the top ten category - a possible testament to the amount of work available in the 40-50 metre section of the market. All of the interior design companies in the top ten category for most projects delivered are on average working on superyachts that are over 40 metres in length. The inclusion of both Azimut Benetti and Zuretti in the overall top ten graph as well as the 90 metre plus graph is proof of their agility and ability to deliver constant interior design projects across all sizes of vessels in the superyacht fleet.