How do superyacht concepts showcase the pioneering technology that appears on the final constructions? 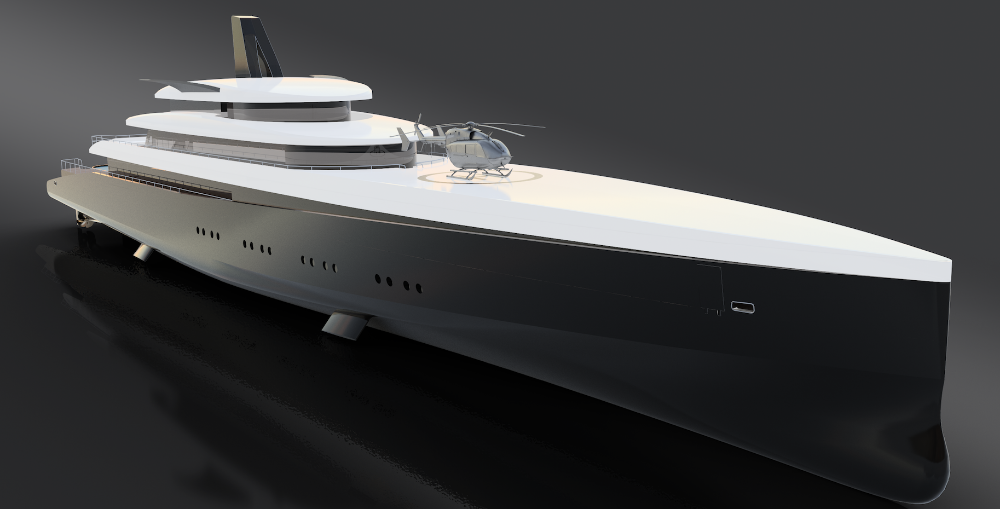 When it comes to conceptual design, many designers focus primarily on what a yacht looks like rather than on what it can actually do. It seems we’re all about creating the vessel of the future without looking too far beyond aesthetics. So should there be more of a focus on how design can solve some of the long list of problems facing the industry rather than just creating another good-looking vessel that may or may not whet the appetite of a potential owner?

With so many new designers entering the market, all producing numerous concepts, differentiation is key. Now, thanks to design software, it can be quite difficult to tell apart renderings that have been devised in only a couple of days from those that are the culmination of months of design study and hard work. On a technological level, something that is fresh and different from other concepts is an interesting notion and one that could create a positive stir in the market.

On a technological level, something that is fresh and different from other concepts is an interesting notion and one that could create a positive stir in the market.

Having said that, we can’t ignore the fact that looks are incredibly important in the industry. A successful superyacht design will, of course, be drawn up to the owner’s aesthetical preferences, even if those preferences aren’t to the taste of the wider market. My point here is that getting a considerable edge over the competition on aesthetics alone is tough if you are not one of the more established names.

Therefore, here, I want to look at concepts that have actually been taken a step further in the design, instead of concentrating only on the aesthetical elements of the vessel; where designers have delved into the technological elements that turn these ideas into something different. Interestingly, there have been a number of concepts, including 110m HEMY by Laurent Giles (pictured) and 62m Crystal Blue by Rolls-Royce, that have been created to promote a particular element of the vessel, such as the naval architecture or hybrid propulsion system. While these often still look aesthetically pleasing on the exterior, they can be much more interesting than average concepts that have been quickly mocked up on CAD.

During The Superyacht Forum 2017 in Amsterdam, Oskar Levander, who is in charge of new concepts and innovation at Rolls-Royce, took to the stage to unveil Crystal Blue. Here, the concept was created to showcase an advanced ship-intelligence solution and hybrid propulsion system that uses liquefied natural gas (LNG) and battery power. Rolls-Royce is looking at the superyacht industry from the outside in and basing its ideas on changes occurring in the wider maritime industry in terms of digitalisation and energy storage.

“Crystal Blue has been developed specifically to show how new technology can meet the yacht sector’s increased demand in higher performance, greater operating ranges and increased levels of comfort without impacting the environment,” says Levander. The basis of the concept is change as we move further into digitalisation, and Levander explains it is only a matter of time before we see significant changes in the superyacht market.

“We are going to see new ways of operating the vessels and how we manage the vessels – it’s a total change, and I think the industry is up for it,” he adds. “The automotive industry was the same for many years, until now where we are seeing electric and autonomous change. We haven’t seen much change in the maritime industry just yet, and that is what will happen too.” Currently, Rolls-Royce is investing heavily in ways to optimise and develop new technologies to make them applicable to the maritime industry.

With the Crystal Blue concept, Rolls-Royce has moved away from pure aesthetics. Levander suggests there has been a stagnation – in not just the superyacht market but also in the maritime industry in general – for quite some time, and drastic changes are likely to be imminent. Will we see more of a focus on the technology behind a concept in the not-too-distant future as we become more in tune with how the industry is changing?

The idea of using a design to showcase the technology within the vessel is a pretty savvy form of marketing, and certainly seems to be an effective one. The profile of a yacht is essentially being used as a hook to incite the onlooker to understand a certain technology.

The idea of using a design to showcase the technology within the vessel is a pretty savvy form of marketing, and certainly seems to be an effective one. The profile of a yacht is essentially being used as a hook to incite the onlooker to understand a certain technology. In this case, the aesthetics of the project are essentially not that important ­– or at least are secondary to what is really being pushed.

“In the last three years we’ve started doing some design work,” says David Lewis, managing director of Laurent Giles Naval Architects. “We are doing conceptual design work, but when I say this, I mean we are producing concepts with a story behind them.” This was the approach taken by the Lymington-based naval architects when unveiling HEMY. The concept is based on the fact that the typical modern superyacht often has to be a compromise between accommodation and efficiency; HEMY was created to address this issue.

The industry is changing for the better, and it appears that many people are looking for ways to utilise new technologies to make yachts more efficient for the owner. These concepts are just two examples of developments that we may see in the near future. More technological elements are being integrated into the superyacht market on a regular basis, and as these become increasingly accepted by the wider market, perhaps we will see other technologically focused concepts that can solve a particular issue rather than just being created for aesthetical values alone.

Rolls Royce are a headline partner of The Superyacht Forum, held next month in Amsterdam. To find out more about the event and secure your place, click here.

This article was originally published in The Superyacht Report, to find out more and subscribe, click here.

The new coins of the realm

The practicalities of aerogel