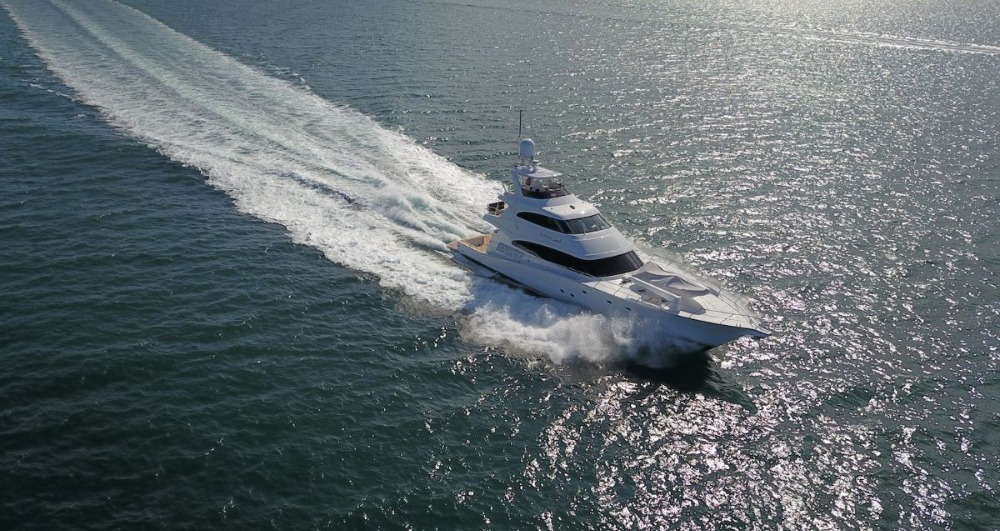 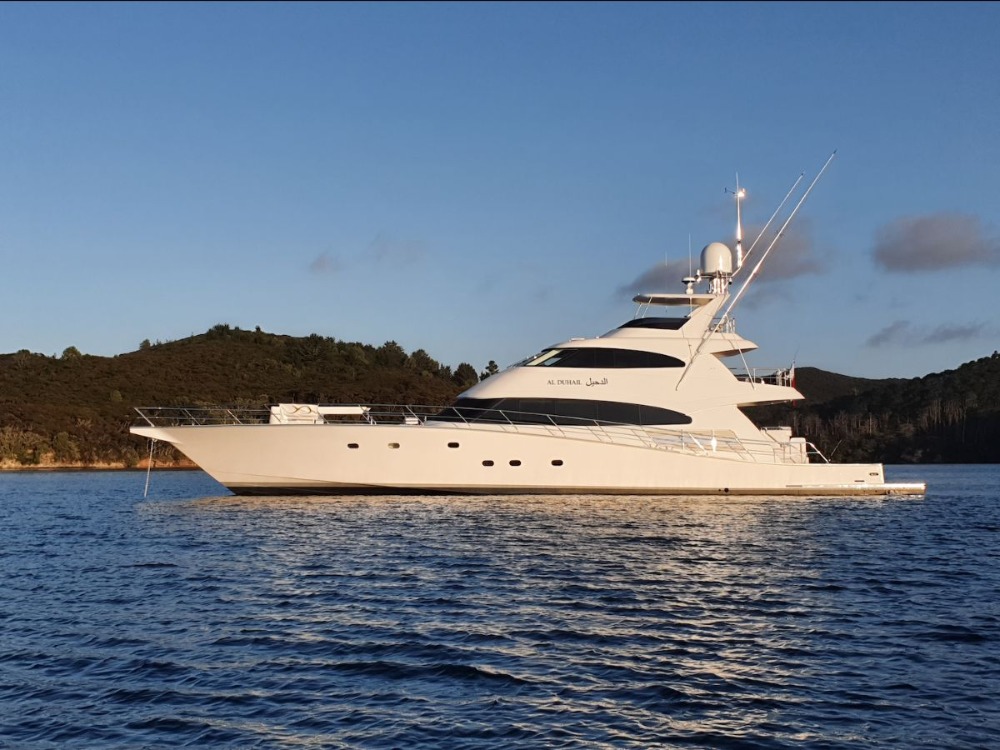 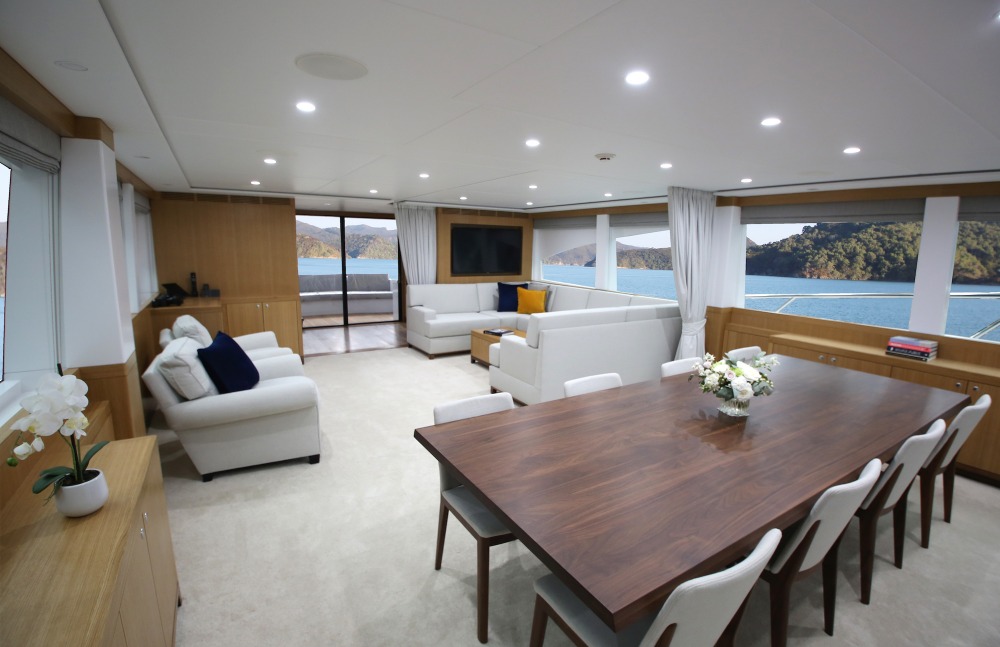 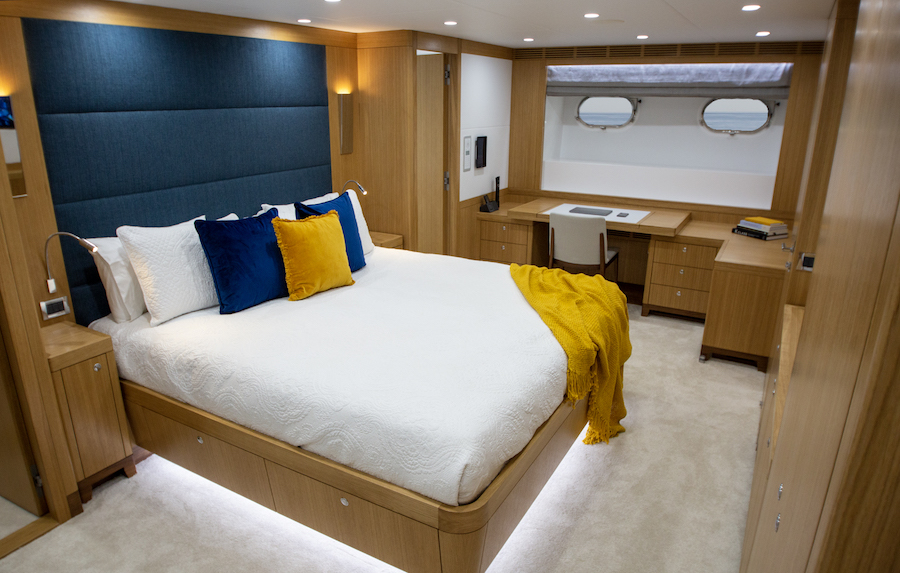 Yachting Developments has announced the safe delivery of 34.3m Al Duhail and subsequent safe arrival into its home port in Qatar. After launching in Auckland, New Zealand, on the 22 January, Al Duhail was formally handed over to its owner in February before the 8,000nm maiden voyage to Doha.

Al Duhail is an all-carbon motoryacht sportfisher that was commissioned by experienced owners who were looking to upgrade their previous sportfisher of the same name. Designed by Warwick Yacht Design, she features a modern, streamlined interior that was developed by Yachting Developments in collaboration with the owner’s team.

“Yachting Developments was initially recommended to the owner’s team by the Warwick Design office, based on our significant experience building this style of light and fast composite sportfisher yachts,” comments Ian Cook, managing director of Yachting Developments. “We have collaborated with the Warwick Design team many times in the past, and we were delighted to have the chance to partner with them on another superyacht project.”

The sportfisher is typically associated with the US market. While most remain below the 30m threshold, there are a handful that take it to the next level and merge the sportfish lifestyle with that of a superyacht. Moving up to the 30m-plus threshold appears to be a relatively new concept for this sector of yachting, but it is certainly an exciting one that has potential to develop further. To read more SuperyahtNews coverage about the rise of the sportfish, please click here.

The sportfisher is typically associated with the US market. While most remain below the 30m threshold, there are a handful that take it to the next level and merge the sportfish lifestyle with that of a superyacht...

Al Duhail drew upon Yachting Developments’ experience in composite construction and benefitted from the experience the yard has gained through its multiple sportsfisher and superyacht projects, including 39.5m Lanakai and 27.4m Satu. “When building Al Duhail we took the technology of standard fibreglass and applied it to carbon,” adds Cook. “This allowed us to reduce the weight of the yacht, while also increasing the speed and range. As a result, she is faster than her predecessor, goes further, and can carry more fuel.”

The Yachting Developments interior team was given a direct styling brief by the owner’s family. “They were seeking a simple, modern and neutral interior that was not overdone, and we developed a palette of light oak with a natural grain, semi-gloss finish while incorporating walnut detailing, upholstered panels and colourful soft furnishings to create a warm comfortable interior,” explains Blair Morten, designer at Yachting Developments.

Up to 10 guests can be welcomed on board and interior spaces include the large main saloon, which features lounge seating and a dedicated dining space, and five guest cabins that include the large master. The yacht has been designed with a focus on fishing and diving, including a large cockpit that has been equipped with an extensive fishing inventory comprising of tuna tubes, live bait tanks, game chair, ice slurry machines and expansive freezer storage.

Exterior spaces include the bridge deck and fly bridge, which deliver clear views and plenty of space for guests to relax. Al Duhail is powered by twin MTU 16V2000 M96L engines and cruises at 20 knots, reaching top speeds of 31 knots, with a range of 2000nm at 10 knots.

Al Duhail also represents New Zealand’s last delivery in its current order book. The New Zealand new-build market has significantly dropped off: having peaked with eight deliveries in 2006, the country is now averaging one delivery per year in recent years. In the last five years, three individual shipyards – Yachting Developments, McMullen & Wing and Profab Central Engineering – have delivered five new-build projects. While the country had a fairly consistent number of deliveries in the early 2000s, economic factors have led to a dwindling new-build market, with many of the country’s new-build shipyards having closed their doors or turned to a refit focus.

A time for reflection: Q1 review

Which shipyards are most consistent?