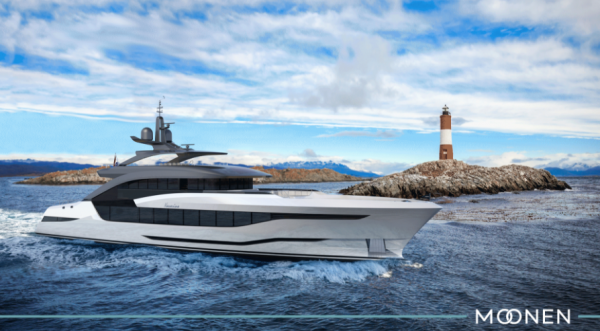 Moonen, the Dutch superyacht manufacturer, has been declared bankrupt by a Dutch court following the arrest of the chairman of its investor in Spain in May of this year. These reports follow Moonen’s own announcement two weeks ago within which it suggested that the business was close to securing the backing of a new investor. In recent years, Moonen has been hampered by a series of financial difficulties as a result of the global financial crisis and the plummeting price of Mexican steel in 2015, as well as undergoing a number of senior management changes, including the introduction of Johan Dubbelman as CEO in 2017.

“In May 2019, Spanish police arrested Alonso Ancira, chairman of the company Altos Hornos de Mexico (Ahmsa), Moonen’s owning company, on charges of corruption,” starts Marianne Hendricks, Moonen’s marketing manager and spokesperson. “Since then the Mexican government has frozen all of his and Ahmsa’s bank accounts, including Moonen’s. Some accounts were unfrozen, however, to enable us to pay wages and subcontractors. However, there has been no financial support from Ahmsa since the arrest. The lack of financial support and the required payments on the building of Project YN199 on speculation has led to Moonen declaring bankruptcy.”

On 1 July 2019, Moonen announced that the business was in the advanced stages of “negotiating a strong partnership” with an investor that is “familiar with the industry and bring an international background of global business. The goal of the new investor, according to a Moonen spokesperson, would be to strengthen Moonen’s position in the market and increase the number of superyachts being produced at the yard annually, “ergo securing sustainable future growth”.

“I see cooperation with the proposed new investor as a very positive development and a perfect opportunity to expand,” said Dubbelman at the time. “By teaming up with this reputable investor, we can secure the future growth, not in [terms of] length – as we remain in the 30-50m segment – but in [terms of] numbers.”

“In the past Ahmsa has not been a very reliable owner, so we were already searching for a next investor.”

Hedricks can confirm that the discussions with the potential investor are still very much alive. “In the past Ahmsa has not been a very reliable owner, so we were already searching for a next investor,” she explains. “Fortunately, we found a person that is eager to enter the superyacht building market and who fits nicely with the company ethos. We were about to introduce the potential investor to Ahmsa shortly before the arrest and the subsequent bankruptcy.”

As chance would have it, the bankruptcy may prove to be a coincidentally positive step for Moonen. Following the arrest on Ancira, the new investor feared the negative fallout from being associated with Ahmsa and the on-going corruption case. However, filing for bankruptcy has enabled the new investor to step into the ownership of Moonen with no links to Ahmsa now the process of bankruptcy has begun. The potential owner was clear that he wanted no association with Ahmsa, which is now possible.

Hendricks is eager to point out that Moonen’s bankruptcy is directly linked to the removal of its financial support on the part of Ahmsa and is in no way related to how the business has been managed since the change in personnel. She hopes that, under the auspices of the potential investor, that Moonen can continue business as usual in the near future and work towards growing the company.

According to The Superyacht Agency, since its first superyacht delivery in 1996, Moonen has delivered total of 15 projects with an average LOA of 33.5m and a total LOA of 502.5m, with the largest vessel being 41.8m Sofia, which was delivered in 2013. Over the past five years, Moonen has only delivered three projects, one in each of the years 2015, 2016 and 2018. The yard currently has one speculation build in progress, 36.6m Martinique 2.

'In response to' the value of the classification society