Out on the water with Emirates Team New Zealand, and their game-changing foiling hydrogen chase boat … 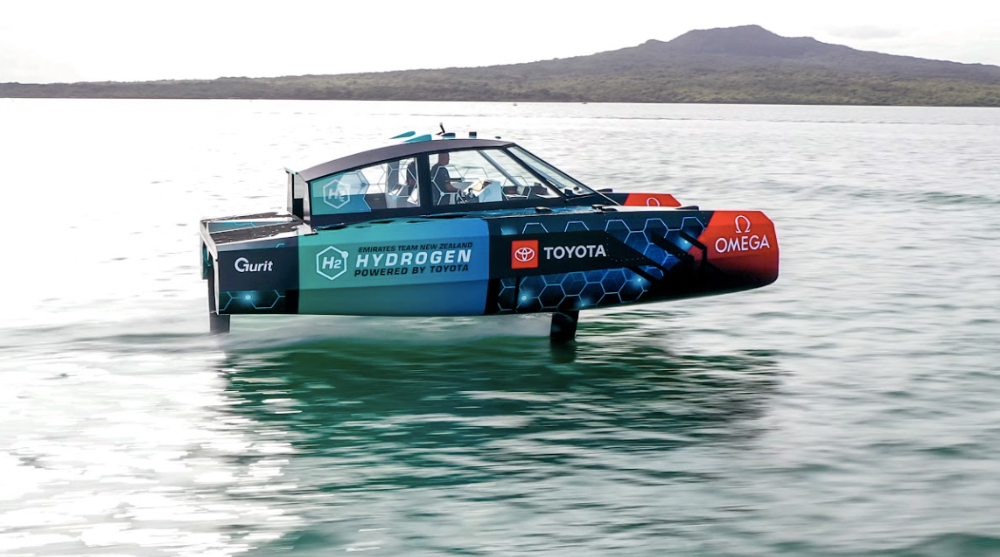 Hydrogen-powered propulsion is one of the key factors that will drive the sustainable development of the marine industry. The superyacht sector has seen some promising developments, but few working examples. As well its defence of The America’s Cup, one of Emirate Team New Zealand’s other projects has broken new ground in innovation. I had the chance to spend the day on the water with the team, onboard Chase Zero, Emirates Team New Zealand’s hydrogen-powered chase boat. The performance, it's fair to say, was paradigm-shifting.

The top speed achieved over its 1042km on the water, so far, is 50.3kts. It was a touch under that with us, but I am sure the weight of a few journalists may have accounted for that. This speed is largely down to the foiling system, borne out of the extensive work the team had made on the America’s Cup yachts. All teams competing at AC37 in Barcelona will need two emissions-free chase boats, and Chase Zero represents the design platform for the first of Emirates Team New Zealand’s support vessels for The Cup. I was astounded to hear that it has been less than a year since the first pencil hit paper, to the sea trials. Essentially starting from scratch, the team have developed a system-wide reimagination of a chase boat's capabilities. 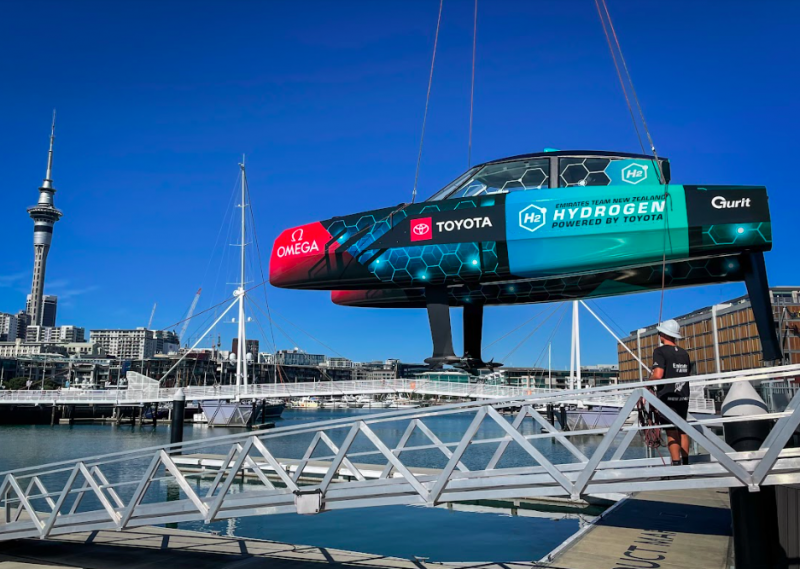 Chase Zero being lifted into the water, note the forward foil position, housing the propellors.

Recalling the first long sea trial of Chase Zero, our skipper for the day, Chris ‘Curly’ Salthouse, explains: “We filled the tanks up to 96% and we wanted to take Chase Zero out to test its cruising range and reliability at the same time. We set out to circumnavigate a few islands around the Hauraki Gulf, we just didn’t expect to be cruising for as long as we did. We ended up motoring for nearly six hours in the end and covered 280km (or 151.2 nautical miles) at an average speed of 28.3 knots,  and still had about 10% gas left in the tanks.”

To put that into perspective, if Emirates Team New Zealand had done the same day’s run in a regular 11m chase boat with twin 250hp outboards, they would have used 140 litres of Petrol an hour at 28knots, which would have equated to 825 litres total. Considering its 800L tank, it could not have even made it back to the dock. At full speed, Chase Zero cuts an impressive figure through the water, as can be seen below.

The 10m Chase Zero uses 350 bar pressurised cylinders, each housing 8.4kg of hydrogen when full. These supply two Toyota 80kW fuel cells, that in turn drive 2 x 220kW electric motors. The 4,800kg displacement is elevated by a Primary π-foil with a single T-rudder.  Salthouse explains that the turning radius is comparable with the larger of the traditional chase boats, and has so far handled up to 1m of swell with ease. The central position of the props, behind the mail foil, gives them clean water flow that produces next to no cavitation. The electric motors are not silent, but there is minimal vibration and noise from the props. On foils, the wake at 40kts is essentially nothing. High-speed cornering likewise, wise incredibly smooth, as can be seen below.

“As a team, we are very proud of Chase Zero and we know we are leading the way forward to a cleaner emission-free future of powerboating in the marine industry,” Says Sir Stephen Tindall, Emirates Team New Zealand Sustainability Ambassador, and supporter of the hydrogen project. “The team have done an amazing job accelerating this technology forward in a very short timeframe and exceeding even their own high expectations. There is an exciting and cleaner future ahead which includes several other potential NZ Hydrogen Marine projects under consideration so NZ might continue to lead the pack.”

Refuelling is done via a supply truck whereby the pressure between the two is equalised before a compressor tops up to the required 350 bar. While this takes hours now, the team hope to have a system in place to complete the process in 15 minutes by the time it hits the water in Barcelona. This is achievable using technology developed by Emirates Team New Zealand's hydrogen infrastructure partner Hiringa, who is developing a hydrogen infrastructure network throughout New Zealand.

I have seen many designs for hydrogen integration on similar sized vessels, as well as some prototype systems on the water, but nothing that matches Chase Zero in terms of performance. Running parallel with some of Emirates Team New Zealand's other projects, such as the 200km per hour land speed under sail record attempt, and the small matter of retaining the America’s Cup, the team are quietly changing the game.

Foiling hydrogen tenders will undoubtedly be a part of the fleet, and the marker has been laid down by the team Downunder. With the regulations for AC37 stipulating that all teams must have two zero-emissions chase boats, Barcelona will prove the perfect testing ground for the technological innovations that each team and associated nation can produce. The racing will be enthralling, I am sure, but I will also be watching who is leading the chase boats, and considering how these designs may drive the next stages of decarbonisation across the industry.

Putting The Sea of Cortez on the superyacht map